So you’ve got your wish, and Mum, Dad, your partner or just your own credit card has given you the Christmas present you wanted – a shiny slap of Apple’s finest. The thing is that, making that initial investment is just the beginning of a slippery slope of potentially endless accessory buying. Once upon a time, your iPod used to come with everything you needed, but that’s not so any more.


With the iPod’s famously sensitive shell a good case is an essential addition. Once you’ve sorted that out, then I suggest you pick up Gear4’s BluEye – to steal my own thunder it’s fantastic. 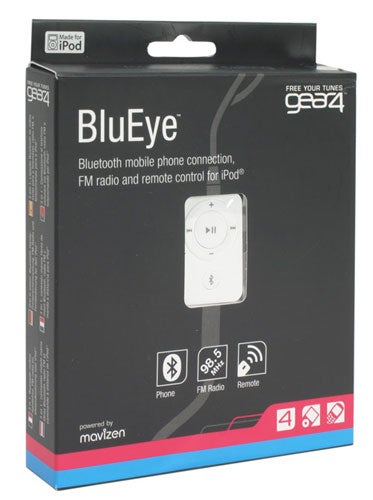 What’s great about the BluEye is that it’s actually three devices in one, all of which are genuinely useful enhancements for your iPod. It enables you to receive and make phone calls without having to even take your phone out of your pocket, it has an FM radio and it also acts as a remote control. After just a few minutes I honestly wondered how I’d got by without it. It works with the 5th gen iPods, the mini, and 1st and 2nd gen nanos. It also works with the iPod photo, but not mono screened 4th gens.


The BluEye itself is about the size of an iPod shuffle with an integrated clip for attaching to your lapel or wherever works best for you. At the centre is a large Play/Pause button surrounded by skip controls to the left and right and volume controls above and below. Beneath this is a button with the Bluetooth logo on it. You plug in your headphones at the top edge while a connector is located at the bottom. A cable (not pictured) attaches to this and plugs into the bottom connector of your iPod. It draws all its power from the iPod so you don’t have to worry about separate batteries, though the inevitable downside is that it places a noticeable extra drain on your battery. 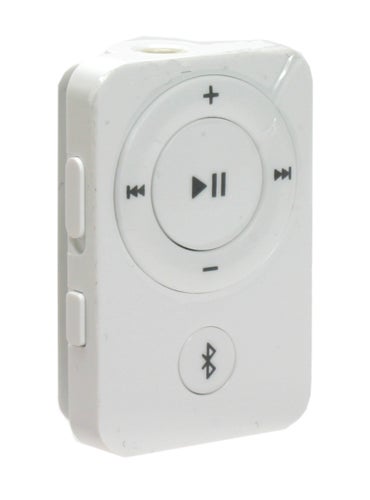 I immediately liked the fact that it connects at the bottom and not at the top. On my old third gen iPod, the remote attached to the top, and the end of the cable tended to snag on my clothes and break, causing wires to pop out – that won’t happen here. On the downside it means that you can’t use it to listen to radio if the iPod is placed in a speaker dock.

Another bonus is that you can use your own headphones. With most mobile phones with integrated MP3 players, you have to use the proprietary and usually rubbish headphones supplied. I want my Koss Porta Pros or noise cancelling Sony’s and that’s it.


An adaptor is supplied that enables you to attach the BluEye to your PC for updating the firmware, so take care not to lose this separate dongle.


Setting up the BluEye was easy. Hold down the Play/Pause and the Bluetooth button to put the BluEye into pairing mode, initiate a search from your mobile and then enter the default code (normally 0000) and your done. Then when your phone rings while you’re listening to your iPod, the music stops and you hear a repeated tone in your headphones. You then press the Play/Pause button to accept the call and the same button to end the call or you press the Forward and Back buttons to reject the call. Your tunes will then automatically kick back in – very neat.


If you answer, the sound is transferred to your headphones and the number along with a phone icon is displayed on the iPod’s screen. The microphone is at the top of the main body of the BluEye, next to the headphone socket, so to be heard properly you’ll need to make sure it’s clipped close to your mouth or you’ll just have to hold it up yourself.


The microphone is very sensitive and in a large, relatively quiet room picked up noises from across the other side of the room, which means that it doesn’t isolate particularly well. That said, if I spoke up I could always be heard even on a busy street. 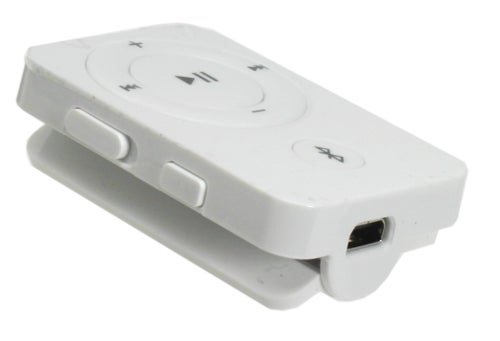 You can also make calls from the iPod. Hold down the Bluetooth button and the previous received number appears on the screen. The manual says that the last nine numbers can be displayed and I was expecting a list of them on screen at once. In fact, only one at a time is shown and you can choose between them with the remote. I did wonder though that if you’re reaching down to view calls on your iPod you could probably just grab your phone and dial with that.


If you’ve set it up on your phone, you can also voice dial – you hold down the Bluetooth button and say the name after the tone. It worked a treat, but you have to remember to get it working on your phone first.


Even so, the ability to make and take calls while your listening to your iPod is just brilliant. When I’m plugged in to my own music world, I have to make sure that my phone is on vibrate and pressed close in my pocket to be sure of feeling it go off so I don’t miss a call. It’s then a hassle to have to take off your headphones and take it out of my pocket to answer the call. With the BluEye you don’t have to worry about any of that – it just works and it’s seamless to use – just as you’d want.

If you iPod turns itself off after a period of inactivity, the BluEye will disconnect from your phone. Wake up your iPod and after a few moments it will reconnect with your phone – on my Sony Ericsson K800i the Bluetooth icon would indicate a connection and then change into a headset icon.


Pressing the button the side of the BluEye switches it to FM radio. The frequency appears on the display and when you hold it to the right or left it locks onto the next strongest frequency. Hold down the side button and it saves your channel as a favourite, up to a total of 15 and you scroll through them with the Skip buttons. Pressing Play/Pause when the radio is on will mute it.


I was quite impressed with the radio, with it picking up some stations even inside the office, as most FM tuners I’ve tried fail to pick up anything at all. However, you’re unlikely to be able to pick up that favourite pirate station you love unless you’re standing next to the mast. 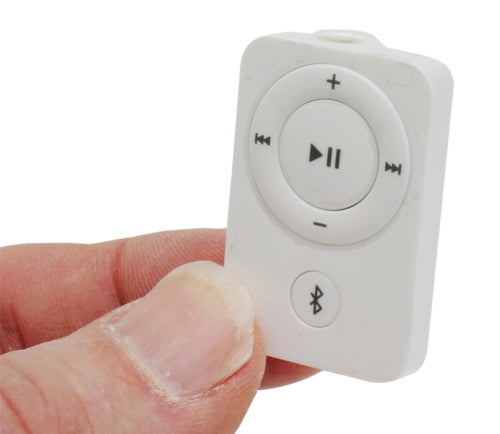 A downside is that only the frequency is shown on the screen – not the station name. This is because the tuner lacks RDS, a feature that is offered by Apple’s official FM remote. Also the Apple one can tune with the scroll wheel, which is more elegant. Similarly, when you get a call, only the phone number is displayed – it doesn’t pull any contact information from the phone, so you have to recognise the number for the call list to be useful. And who knows people’s actual numbers these days? It could be an issue.


Furthermore, the numbers and station frequency are displayed too small on my full size iPod screen – though that really is nit-picking.


Finally, if you aren’t answering calls or listening to the radio, you can use the remote to just listen to music on your iPod! Who’d have thunk it? The remote lets you skip tracks, pause and control the volume and after years of not using one I’d forgotten how useful that can be.


The only real negative to the BluEye I was sent for review was that is was in white, while my iPod is black. Luckily, those geniuses at Gear4 have thought of everything and you can get the BlueEye in black too – but not in blue.


The BluEye is a triple success and can be picked up to £39.99 online – a bargain when you consider that Apple’s FM remote, sans Bluetooth, will set you back £35.


Gear4 gives the iPod just what it needs – Bluetooth for answering and making calls, an FM radio and a remote. It’s easy to set up, works superbly and is reasonably priced. An essential iPod accessory.