Gadgets are great – they keep you in contact when you’re away from the computer and they can provide you with entertainment – music, movies and games – when you’re travelling. But they do have their downsides. They can be greedy for your attention and, when you’re using them, you tend to cut yourself off from the outside world, stay insular and ignore the people around you. They’re not the last word in social enablement.


Imagine plugging in your headphones on the train when you’re off on a night on the town with your mates, or breaking conversation to answer a text message at a party. No matter how boring the conversation is, or how much you want to be somewhere else, doing either is going to make you look a little rude. 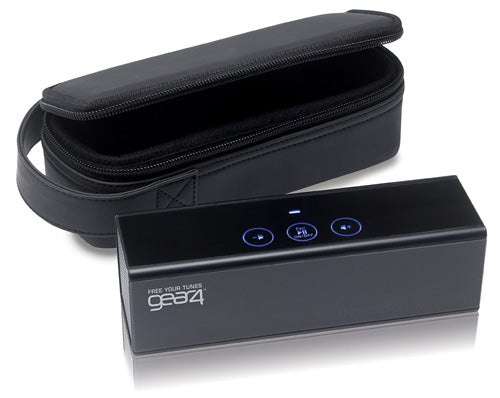 But not all gizmos are hewn from the same, antisocial cloth. Some can help smooth the gears of the social machine – and Gear4’s latest portable speaker, the BlackBox Mini is just such a device. I know that’s a bit of a hefty intro for such a small device – it’s just a humble portable speaker, after all – but I think it’s worth the build up.


Why? The first reason is that it’s well-designed. There are a lot of portable speakers on the market, but not many are as neatly and cleverly put together as this. The first thing to point out is its size; it’s absolutely tiny. In height, width and depth the Mini is roughly the size of a can of Red Bull – albeit square in profile rather than cylindrical – and this makes it, if not pocketable, certainly something you can chuck into a bag pretty easily. It even comes with a padded case to protect it from the day-to-day knocks and scrapes it’s inevitably likely to suffer.

It looks pretty good too, all done out in glossy black plastic, and with a set of three glowing touch-sensitive buttons (these let you adjust the volume, turn the speaker on and off and pause the music) on the top to cap it all off, it looks pretty swish. The speaker drivers are mounted in each end and, unusually, fire sideways through a pair of black grilles. These are solid enough to protect the drivers from accidental in-bag damage and yet just transparent enough that you can see the silver cones through them if you happen to take a look. Very bling, bling. 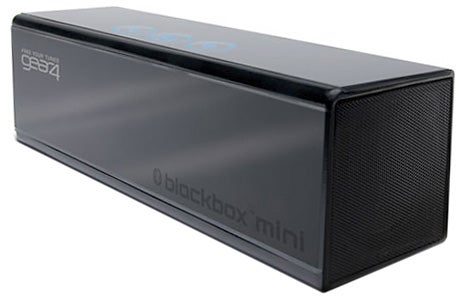 The second reason is that the Mini has been extremely well thought out. You can, of course, connect to it via Bluetooth for use with any A2DP Bluetooth-equipped mobile phone or MP3 player – that’s its main ”raison d’être”, and it’s brilliantly easy to setup this way – and you can also hook up to it via a 3.5mm audio input on the rear if you want to use it with a mate’s standard MP3 player. 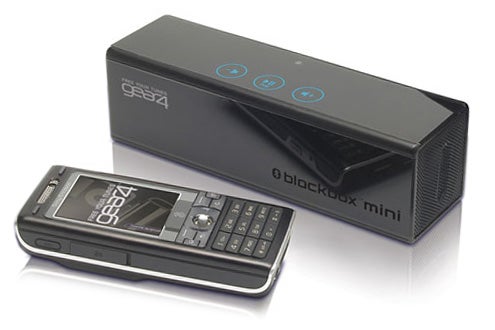 The way the speakers get their power is just as flexible, too. You can simply stick four AA batteries in – which is how most people will probably choose to use it – or power it via the mini-USB socket on its rear. There’s also a ‘wall-wart’ power adaptor supplied in the box, but you can just as easily hook it up to a spare laptop or desktop PC socket for music while you work.

You might think that a speaker of this size and portability couldn’t possibly generate music at a decent enough volume level for a small gathering, but you’d be wrong. Okay, so it’s not exactly going to shake the floorboards with its miniscule speakers and tiny power output, but it’s good enough to play music accurately, at reasonable volume and without ever a hint of distortion. For a speaker this small and light, that’s a truly impressive feat, and it’s easily good enough for background music at a small get-together. 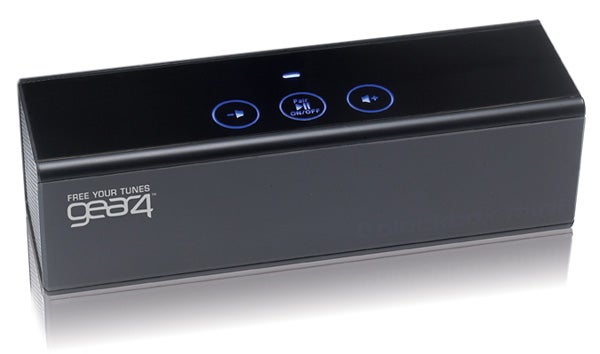 It even manages to kick out something resembling bass, with a balanced mid-range and clear treble to go with it that’s so often absent from much larger so-called portable speaker systems. The result is that while I usually can’t stand listening to music on most laptop speakers – they’re universally appalling it seems to me – I was perfectly happy listening to music on the BlackBox Mini while I worked away on this review. It sounds like you’ve got a half-decent radio on your desk rather than the tinny, weak and flat-sounding music that you might expect to come from a device this small.


Possibly the only disappointments with the mini are that, unlike the Parrot Party, it doesn’t come with a rechargeable battery in the box, and that the touch-sensitive controls don’t included skip track functions. But truly, other than these small complaints, there’s very little wrong with the ultra-portable BlackBox Mini.


Gear4’s BlackBox Mini looks good, is easy to operate, is about as transportable as you’re likely to get from a portable speaker and it isn’t even that expensive at under 40 quid – half the price of the aforementioned Parrot Party. For tunes on the move, picnics, trips away and any situation where you just want to share a few songs with friends without cranking up the volume, it’s nigh-on perfect.