Why is usability so often overlooked when designing consumer electronics products? All too frequently this most basic requisite seems to suffer at the hands of good looks, speed, or features and yet without it, all these other elements are somewhat worthless. After all, if it’s not easy to use, you probably won’t use it at all. Well, thankfully, today we’re looking at a product that certainly doesn’t fall into this trap.


The Gear4 BlackBox 24/7 is in essence just another iPod speaker dock with an FM radio. However, it’s immediately obvious there are some areas where it pulls ahead of the pack and, as we’ll see later, there are some less obvious areas as well.


Starting with its appearance, the Blackbox 24/7 is a masterclass in getting great design from a relatively small budget. The Blackbox only costs about £50 yet it’s as stylish as many equivalents that cost two or three times as much. Admittedly the plastic is quite soft and will scratch fairly easily if mistreated but if you’re careful then there’s no reason why it can’t stay looking good for a long time. 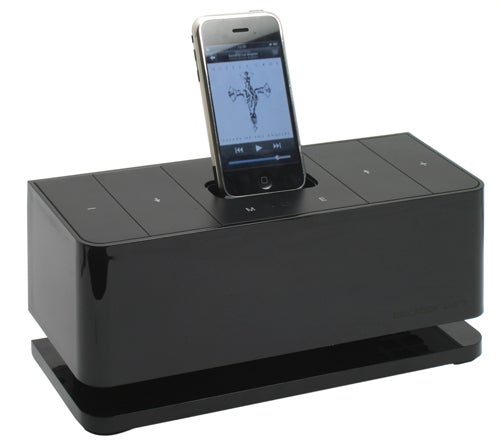 One thing that does let the look down slightly is the top with its comparatively dull matt black finish and peculiarly enormous touch-sensitive buttons. A continuation of the glossy plastic found on the sides with some nicely etched button markings and subtle backlighting would have finished the look off perfectly. Still, while not overwhelmingly gorgeous, the buttons are at least very functional. The vast spacing and responsive touch sensing makes them all very easy to find your way around.


There are only controls for volume, power, mode selection track-skip/tuning, and alarm selection but a remote is on hand to do more sophisticated functions. We’ll come to that in a moment, though. 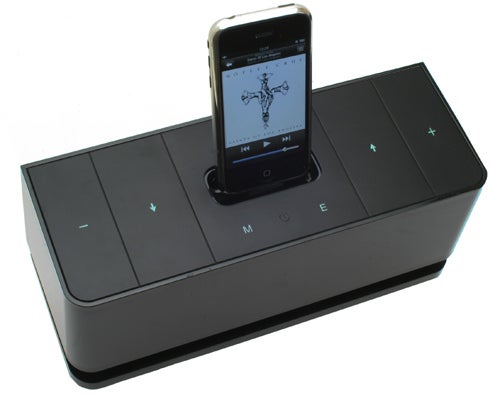 The dock is a typical universal type that’s compatible with all of Apple’s recent iPods and iPhones. You’ll need to turn your iPhone to ”Airplane” mode if you want to avoid occasional squeaks and whistles but it charges your phone while docked and otherwise works fine. Adapters for all iPods are provided in the box but sadly there are no iPhone adapters so you’ll need to buy one if you want your iPhone to fit snugly in the dock. Personally, I’m happy without using an adapter.


Hidden between the stand and top is a blue light that can be manually turned on and off by touching the power button for a few seconds (this also works via the remote). It provides a useful yet subtle glow that lets you just about find your way around a darkened room without dazzling yourself or waking up your other half like a normal nightlight might. 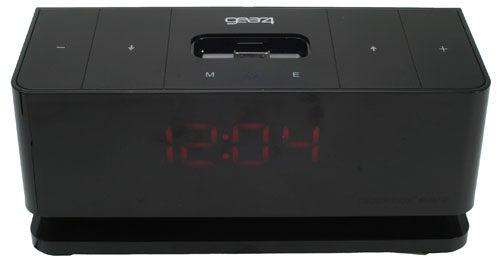 The real party piece of this device, at least as far as I’m concerned, is its display. It employs an enormous four-digit segmented LED display to show the time (well strictly it’s three and a half digits as the first is only ever a ‘1’ or off – a 24-hour clock option is not available in other words). When off, it’s completely hidden within the surface of the Blackbox’s front but when turned on it’s wonderfully easy to read, no matter what angle it’s viewed from. The only slight problem is you can’t actually turn the display off without unplugging the device, nor can you adjust its brightness. Even though it’s not a disturbingly bright display, some people may still find it a distraction when trying to sleep.

As well as the clock display, there are a number of icons to indicate which mode the Blackbox is in – FM, iPod, or Aux – and for setting up the alarms. There are two alarms and each can either set off a beep, the radio or the iPod. 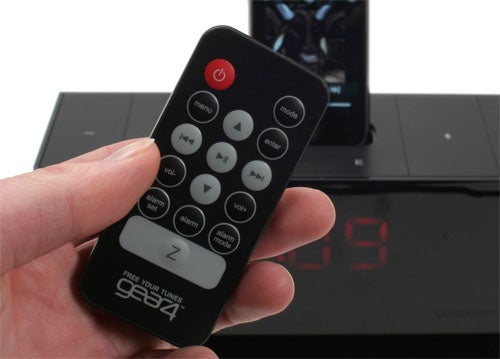 At this point we can return to the remote control its only using this that we can actually set the time for the alarms. As well as this, and duplicating the controls on the device, the remote also has a snooze button for setting snooze times of 15, 30, 60, and 90 minutes. Most notable, though, is it can fully control your iPod. Now this may sound like a fairly unremarkable feature but you’ll be surprised how few iPod docks actually let you navigate menus and pick what album you want to listen to without having to resort to physically using the iPod. 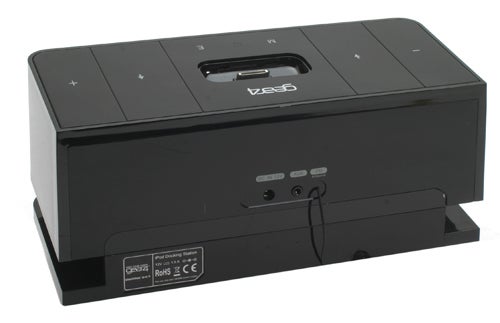 It’s tempting to complain about the lack of either DAB or Internet radio, and I think there is potential to have a very similar looking device with these features, but for the price, FM is all that could be expected. The wire aerial is permanently attached and rather short but it managed to pick up a reasonable signal in our office, which normally has very poor reception. There are no favourites or any other sophistications; you just tune in and listen, which is fine by us. Also round the back, alongside the socket for the power adapter, is an auxiliary input jack for plugging in alternative audio sources.


Unfortunately, having had such a good showing so far, it was somewhat inevitable that such a moderately priced device would trip up somewhere and in this particular instance its sound quality that’s the culprit. Now it isn’t appalling by any stretch of the imagination and there are few similarly priced devices that overshadow it. However, there’s no denying that bass is lacking and the overall sound is somewhat tinny. What’s particularly odd is that it sounds like it’s struggling (i.e. like someone straining to hit that high note that’s just out of reach) even at low volumes yet it doesn’t get worse as you increase the volume. This would seem to be due to the preamp circuitry simply not being very sophisticated and compressing the music slightly. 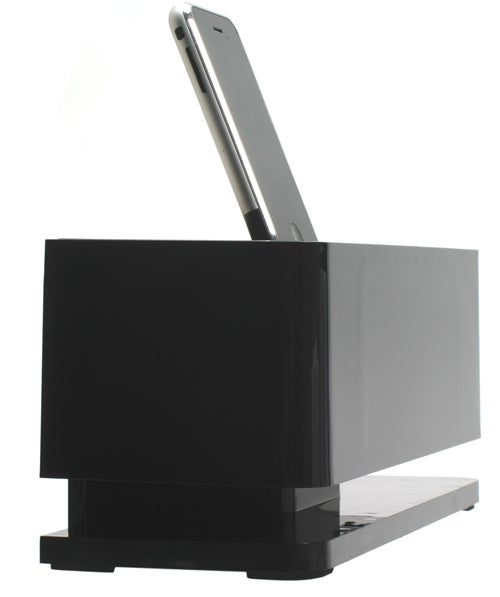 Ultimately, I could spend three paragraphs describing the exact nuances of the sound the Blackbox produces but I could probably sum it up in five words; it sounds like it costs.


If you’re looking for a simple iPod speaker dock and radio for your bedside table then the Gear4 Blackbox 24/7 is definitely worth considering. It’s very easy to use, has a large easy to read display, and the remote can be used to control your iPod, all three of which are not givens when it comes to these sorts of devices. Add in the fact it can be had for just £50 and you’ve got yourself a bargain.