When we first looked at the Griffin iTrip, reviewed way back in 2003 would you believe, we were fairly enamoured with both it and the concept it represented. Being able to listen to the music imprisoned within your iPod via a car radio is clearly a great extra feature to add to everyone’s favourite MP3 player.


Of course times have changed over the last four or five years and the concept which so wowed us back then, when the iPod wasn’t such a ubiquitous device, seems fairly common place today. Nonetheless, as the driver of a car which isn’t among the increasingly large number sporting a built-in iPod dock, line-in jack or similar and the owner of an iPhone, I can still appreciate the benefit of being able to listen something other than Just a Minute with my car’s radio. 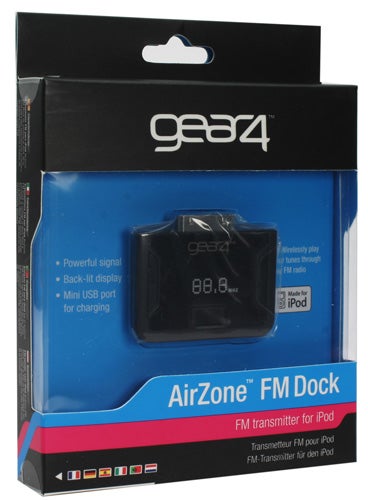 The most recent iPod FM transmitter we looked at was the Moosik CK3000-HD and although we decided the name was utterly ridiculous, we also concluded that if you were in the market for an FM transmitter for your iPod then that was the one to get. Today we’re looking at a contender for such a recommendation, the Gear4 AirZone FM Dock.


If simplicity were all that was required to garner a recommendation then the AirZone would certainly be in line for one. At what I shall consider the top of the device is the iPod dock connector, at what presumably must be considered the bottom is a mini-USB port for charging the iPod with the device still plugged in (a notable feature regardless the AirZone’s main capability) and on the front sit three buttons. 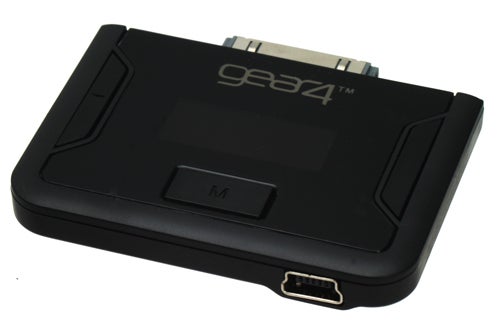 Pressing the central M button changes the function of the other two. By default pressing the right cycles up through the AirZone’s four pre-set frequencies and the left the opposite. Press M once and these buttons allow you to choose what frequency said preset is actually set to. Pressing M a further time saves that selection. Incidentally, these buttons all have a reassuring feedback, both tactile and audible. It’s hard to convey in words but they really are lovely to press.


On the subject of frequencies, the range of the AirZone is from 87.6 to 107.9 FM, meaning that unless you often find yourself driving the entire length of the country regularly via several major cities you should be able to find a frequency free from interference that you can stick to – and then plug that into both your radio and AirZone’s presets.

When plugged into your iPod the Gear4 AirZone FM Dock works just like any iPod dock, although incidentally it isn’t certified as iPhone compatible so if you do wish, as I did, to use it with an iPhone you’ll get an annoying pop-up informing you of that fact every time you plug it in. On the plus side, receiving a phone call didn’t actually cause any interference, although using a car radio as a hands free set isn’t, to my mind at least, isn’t the best solution.


The AirZone draws all its power from the player it’s plugged into, and if the numbers on the back of the device and my maths are correct, it draws a mere 300mW of power. The range and volume of the AirZone are fairly mediocre. Subjectively, I usually have my radio set to about 35 for radio listening but to listen to the music streaming from the AirZone required pushing that up to 50 – subjectively that would be ear-bleedingly loud in other circumstances. 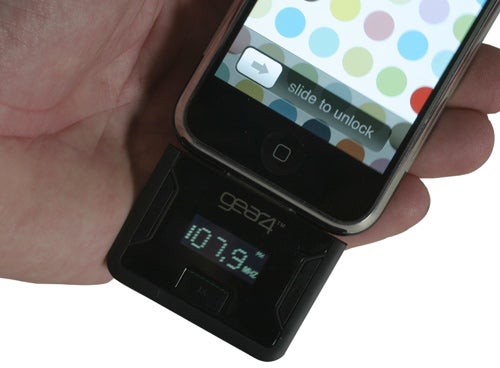 The problem with this is two-fold: first, if you decide you want to change to a radio station you’ll probably find yourself suddenly loosing your grip on your steering wheel in order to shield your aural cavities due to the sudden increase in volume. Second, when the signal from the Gear4 AirZone drops off, which it does occasionally, you’ll also get a healthy dose of high-volume static.


Normally with an audio product it would seem pertinent at some point to talk about sound quality, but it isn’t really applicable here. The music (or any other MP3 content for that matter) played via the AirZone sounds as good as anyone has any right to expect from what is essentially an FM source. 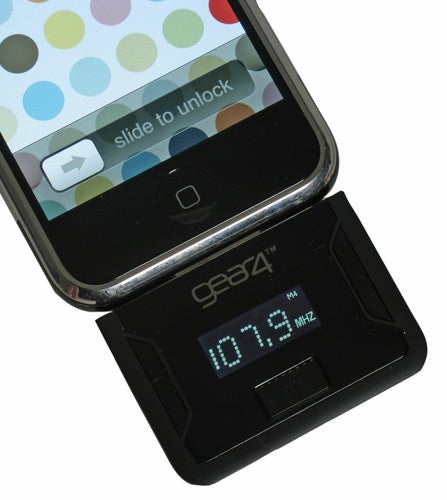 Comparing to the competition, the Gear4 AirZone FM Dock definitely doesn’t do anything wrong while conversely doing everything it claims to be able to. On that basis then, it’s hard to criticise, so I won’t; the fact that all you have to do is plug the AirZone into your iPod’s dock connector saving the hassle of a trail of wires polluting your car’s cabin is compelling enough. Plus, with a suggested retail price of £19.99, you’re not breaking the bank to buy one by any stretch of the imagination.


I asked before whether or not the Gear4 AirZone FM Dock could replace the Moosik CK3000-HD as our iPod FM transmitter of choice. The answer is yes. The AirZone is both a cheaper, simpler and more elegant solution than its competitors and thus if you’re in the market for such a device, we’d recommend the Gear4 AirZone.