Gateway is a brand that I haven’t had the pleasure of discussing in quite a while. It takes me back to when I was 12 years old at school, to a friend of mine who was completely obsessed with cows. He was also an utter geek in every respect so naturally he was an excellent programmer, so his mild insanity can be forgiven as a side effect of his genius. I forget if he was obsessed with cows before he bought a Gateway, or after – but he quite refused to buy anything else.


Since that time, Gateway has changed its logo several times. In fact, I seem to recall it even got rid of the cow spots for a short time, but considering I can’t find any documentation collaborating my story, I’ll just put it down to a hallucinogenic in the water supply. 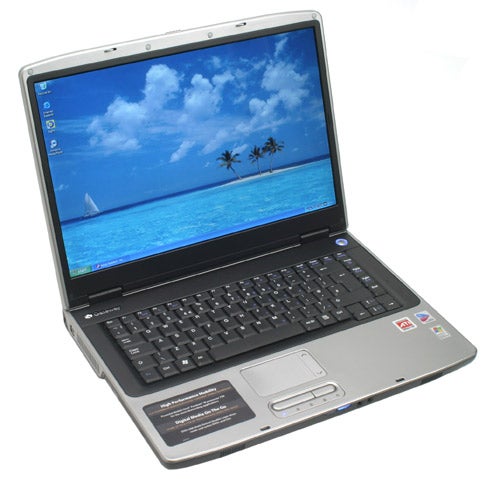 The notebook I’m looking at today is the MX6640b. On the inside, this uses a Pentium M 750 (1.86GHz) single core processor, 1GB of DDR2 memory (in dual-channel configuration), an 80GB IDE hard drive and 8x dual-layer DVD+/-RW drive. Being a Centrino branded notebook, it has 11/54Mbit wireless as well as a Gigabit LAN provided by a PCI Express Marvell chip. We were a bit disappointed to see Bluetooth not find its way on to the list of connectivity, as this is widely used and found on most notebooks we see today.


Powering the widescreen 15.4in 1,280 x 800 display is an ATI Mobility Radeon X600 SE. This is hardly top of the range, but will play a few games and does have the added benefit of having its own 128MB DDR frame buffer, rather than sharing the system memory. This should improve system performance somewhat. This notebook also has support for TV-Out, but no cables were supplied. Disappointingly, although there is an option for an external display, it is only by D-SUB and not DVI.

The chassis is fairly solid, with a predominantly silver finish. The keyboard and surrounding area uses a darker grey which offset each other nicely. I’d go as far as saying it’s stylish! It’s certainly not going to impress your iPod loving fashion victims, but it should at least stop strange looks from family members.

The back of the notebook is rather bare, with only the D-SUB and power connector. Most of the connectivity is on the right hand side of the notebook. This includes four USB 2.0 ports, a mini FireWire connection, RJ11/RJ45 connections and a card reader supporting SD, MMC and Memory Stick. If you are using an external mouse, connections here can get in the way. On the front, we have microphone input and headphone output. The sound card is a fairly limited affair, so we don’t have any digital outputs for more than two channels.


There is a single PC Card slot, should you want to add anything extra such as a better sound card. 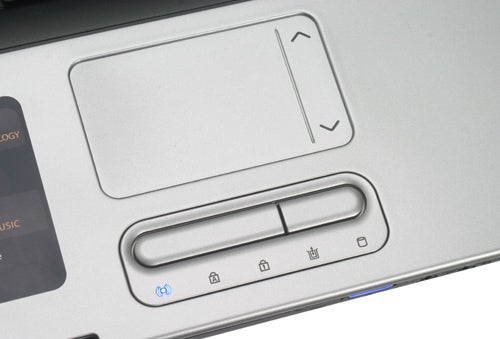 The trackpad was quite satisfactory, which is more than I can say for some. As you can see, there is a section specifically for scrolling, which is fairly standard on all notebooks. The LED indicators below it are subtle but functional.


Included with the notebook are Windows XP Home and Microsoft Works 8. Also installed is a 90 day trial of McAfee Internet Security, Cyberlink PowerDVD, Nero 6 and BigFix. A nice touch is how Gateway has renamed the Nero start menu item to “Burn a CD or Data DVD” as to a novice it isn’t instantly obvious what Nero does.


Should you have any problems with the machine, there is excellent PDF documentation. For more severe situations, Gateway has included a suite of recovery options, including the ability to restore the machine to its factory defaults. This is all stored on a partition on the hard drive that is available during boot time. Should you accidentally delete this partition, it is also provided on a DVD. Recovery took 43 minutes from pressing the boot option to a finished desktop. Not bad at all Gateway.


We tested this Notebook using our normal selection of SYSMark 2004SE, PCMark 2005 and MobileMark 2005. We compared this to the recently reviewed Fujitsu Siemens Amilo L131OG. Admittedly this is £250 cheaper than the Gateway, but you see where the extra money goes on this Gatway. The Fujitsu-Siemens only uses a low-end Celeron processor, which doesn’t support the same power saving technology as Pentium M.


Not surprisingly, the Gateway takes away first prize in every occasion. This is most noticeable in the area of battery-life where SpeedStep can make a huge difference. Where as the Fujitsu claimed 115 minutes, the Gateway almost doubled that with 228 minutes. When playing a DVD, this was even more noticeable, with over double the battery life – 97 minutes to 200.


PC Mark illustrates the expected difference in CPU power. But what else is incredibly noticeable is the difference in theoretical memory performance, which manifests itself in the slightly more real-world SYSmark. This is because the Fujtisu not only uses DDR instead of DDR2 memory, but uses integrated Graphics. 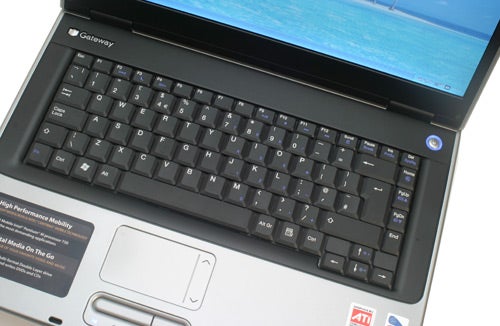 
The MX6640b is only sold in Staples stores across the UK, not even on Gateway’s online store (which is apparently a separate company). So if you have relatives that tend to walk in to high street stores in order to buy a notebook, then you could do a lot worse than to point them in the direction of this Gateway.