Some people are put off by the idea of buying a PC from a supermarket. They may wonder where the technical expertise is to support them and also whether the supermarket hasn’t bought a job lot of hard-to-sell PCs. ‘Specials’ – such as Gateway’s GT5074b – are often for sale through just one outlet; in this case, Tesco.


Special models also tend to be on offer for a limited period, making them quite problematic to review. For instance, this machine will only be available till the end of July 2007. With such a short shelf-life, it’s almost discontinued by the time the review has gone live. To get around this, we’re going to try and issue a brief update when the system is ‘refreshed’, indicating the differences between the new machine and the one reviewed here. 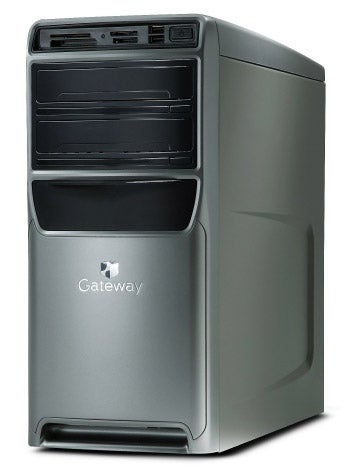 At first glance this is a fairly typical midi-tower system styled in two tones of titanium grey. However, look a bit closer and you notice a 15-way card reader with twin USB2.0 sockets at the top and a slide-down shutter located below the 16-speed DVD rewriter.


Open the shutter to reveal not only audio, video and FireWire sockets but also a Gateway portable media drive bay. This is a growing trend among desktop PCs, enabling a secondary hard drive to be removed easily – ideal for moving between two PCs or simply to secure safely when the PC isn’t in use. There’s no drive supplied here, but Gateway US prices them at $149 for 120GB and is apparently negotiating with Tesco to sell them for around £80 over here. 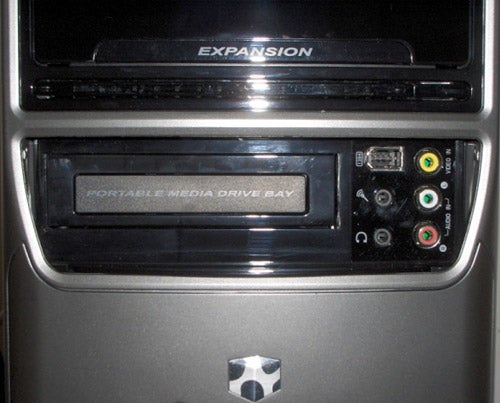 At the back are all the sockets you’d expect to see except serial and parallel ports. The Gateway site quotes one of each but neither is actually fitted, leaving few options for legacy peripherals. There’s a second FireWire port and six more USB2.0 sockets, though three of these are used to support the Gateway mouse, the wireless Media Centre remote control receiver and to power the speakers.


The keyboard and mouse are both cabled so no need to worry about batteries. The keyboard itself has both a gentle action and a good set of extra function keys for multimedia control, cut-and-paste and folder navigation. The pair of small speakers is sufficient for Windows noises but will need to be supplemented if you use the PC’s DVD or TV facilities regularly. To see the peripherals head over here.

Inside, we find a system built around an Intel Core 2 Duo E6320 processor (which shares 4MB of internal cache between the two cores) supported by 2GB of main memory on a 1066MB front side bus. There’s a 320GB SATA hard drive for all your storage needs (even if you regularly record TV programmes to it) and a 256MB nVidia GeForce 7500 LE graphics adapter, which runs cool enough not to need its own fan. In fact this machine runs commendably coolly and hence very quietly. 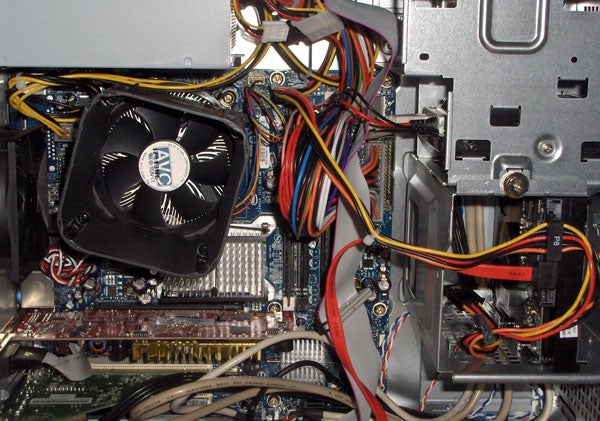 Set up is simple, with only five connections to be made. You’ll also need a monitor of some kind, as the PC is sold without one. 19-inch LCDs, including models from Gateway, are available for around £150.


The specification of the GT5074b ensures it has very little problem running the kind of multimedia applications used in the home. It has plenty of main memory, twice Microsoft’s recommendation for Vista Home Premium. The provision of a hybrid TV tuner card, which can receive both analogue and digital Freeview signals, ensures compatibility even when the analogue signals are switched off some time before 2012.


PCMark 2005 clocked up a very creditable score of 4,626 and, although the GeForce 7500 LE card doesn’t give you a mean games machine, it’s still a very serviceable one for general use. Interestingly, the designation throws up no product information on the nVidia site, which pretty much indicates that it’s an OEM card.


Gateway provides an infra-red remote for controlling the Media Center built into Vista Home Premium and this works, but is not as forgiving as Microsoft’s own; you have to point and shoot quite accurately at the receiver. 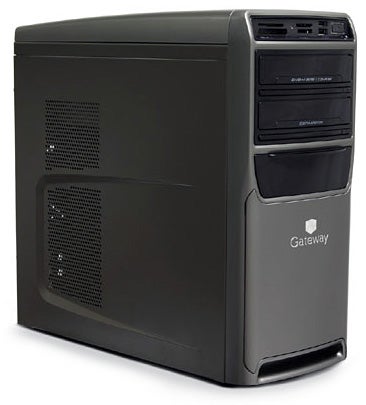 A full copy of Works 8.5 is provided with the machine so you can create basic documents and worksheets straight away. A 60-day trial of Office 2007 Home and Student is also pre-installed, to try and persuade you to upgrade. The idea is that after using Office for two months you’ll be too committed to stop. McAfee works on the same principle with its Internet Security Suite, though at least here you get three months.


In answer to the questions posed at the start of this review, Gateway’s tech support number is printed on the outside of the case and there’s a one-year, back-to-base warranty on parts and labour. The GT5074b is no job lot, but a great, general-purpose home PC at a very good price. It has all that’s needed for photo enthusiasts, DVD movie and TV watchers and a security optional extra, in the form of a removable media drive. Gateway has also taken full advantage of Vista Home Premium by providing an analogue and Freeview TV tuner card, a remote control and enough capacity in the hard drive for PVR recordings. If you live close to a Tesco (and who doesn’t) you don’t even need to pay carriage costs.