It’s well over a year since we last looked at a PC from Gateway. Back then Gateway had just recently made a return to the UK after a leave of absence. During this time Gateway had retreated from all international markets in order to refocus and consolidate the company. Upon returning to the UK, Gateway decided not deal with UK customers directly but rather to sell in bulk to large high street retailers like Dixons, Comet, and Tesco. This allowed it to keep overheads at a minimum while still ensuring the widest possible coverage – quite cunning really. The result is that if you look for a Gateway PC anywhere else, online or on your high street, you won’t have much luck. Instead you’ll be forced to visit your nearest out-of-town retail park to pick one up. Well, that or visit the shop’s website.


Today I’m looking at one of Gateway’s new line of PCs that ships with Windows Vista preinstalled. Being the Home Premium version of Microsoft’s latest OS, the PC has a strong emphasis on multimedia, with the inclusion of a TV tuner card and Windows Media Center remote. Also, rounding out the multimedia buzzword credentials of the PC, it conforms to Intel’s Viiv standard. 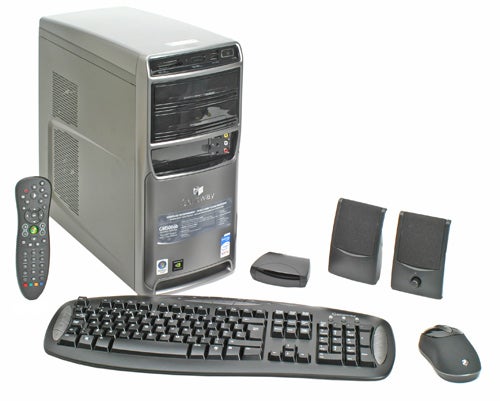 However, the GM5066B isn’t a Media Center PC that you would expect to sit quietly under your TV and is more of a typical family all-rounder, just with a few bells and whistles added on. Whether all these multimedia additives will ever be used by your average family remains to be seen – who really has a TV aerial in their office or wants to have a PC in their lounge? – but certainly I could see this sort of PC being perfect for a student or teenager. However, if you’re into your games you’re definitely going to want to save your pennies for something with a bit more oomph, either that or buy a graphics card separately and swap out the pitiful GeForce 7300 LE that comes with this machine.


Elsewhere the specifications of the GM5066B are much more satisfying, including an E6300 Core 2 Duo processor which runs at 1.86GHz, 1GB of DDR2 memory and a 320GB hard drive. This is a well balanced set of components that will take full advantage of all that multimedia potential, though you may find the single gig of RAM slightly limiting if you’re heavily into multitasking. This is especially true as the graphics card will be using up to 256MB of memory for its own purposes.


The PC itself is housed in a typical budget painted steel case with a two-tone plastic fascia. The choice of gunmetal and black as a colour scheme isn’t exactly original but it is a tried and tested combination that never causes offence. What does, however, let the case down is the plastic door that conceals the 3.5inch drive bay, FireWire, and audio connections. It is stiff and awkward and tends to get stuck rather too often. The two doors that stealth the two 5.25inch drive bays fair slightly better though they’re still not perfect. Overall, the externals of the case are as good as could be expected for the money. 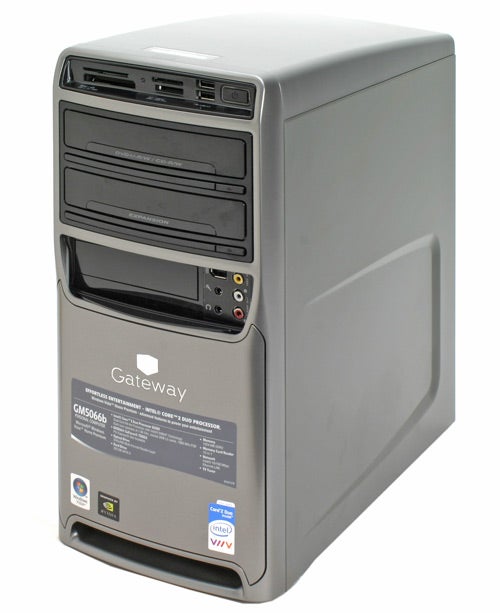 One thing I haven’t seen, to such a great extent, before is the over zealous use of labelling and stickers on this case. Literally every port, bay, and socket is labelled and the front is plastered in various brand name and support information stickers. Normally I would lambaste this but of course this PC isn’t meant for the enthusiast or the casual user, it’s meant for the novice. So I guess all those constant reminders as to where your CD goes could be useful. Though, I think even the complete novice would prefer to have a few separate labelled diagrams rather than a messy case.


The left panel (as you face the front) of the case is secured by a pair of thumbscrews, which ensure easy access to the innards of the PC. Inside, everything is where you would expect and cables are kept out of the way by judicious use of cable ties, there’s no sophisticated cable tidying though.

The finish of the metal elements isn’t the best I’ve come across and there are a few sharp edges hidden among the various drive bays. A large duct is employed to suck cold air from outside the case directly onto the CPU and a small fan above the motherboard IO panel expels warm air out of the chassis. This appeared to be adequate ventilation as the PC was rock solid throughout our testing and didn’t emit a particularly disturbing level of noise either.


There are two spare 3.5inch drive bays, one internal and one external, so you have the option of two extra hard drives or one extra hard drive and a floppy drive. However, there is only one spare SATA power connector so your choices are limited somewhat. The hard drive cage is mounted perpendicular to the case and is attached by a single thumbscrew – this makes a big difference to the overall ease of working within a small case like this; a definite plus point. 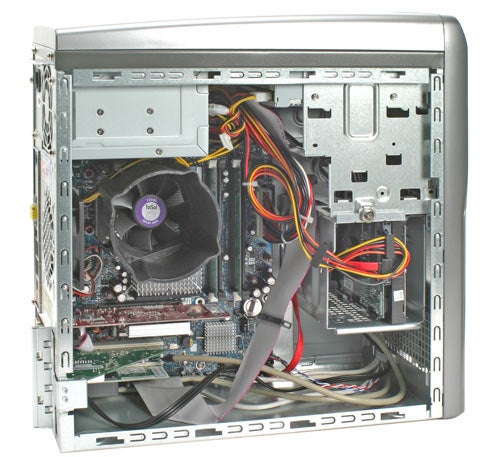 The motherboard is an Intel DG965OT which actually has onboard video, in the form of Intel’s X3000 integrated graphics, but this has been disabled to allow for the GeForce board to take over graphical duties. Gateway has even put a little sticker over the onboard VGA connector telling you to use the other one – a nice touch, which is sure to save on support calls. The fact that you’re paying for two poor graphics solutions in the same PC is a bit of an annoyance though and I’d much rather Gateway had chosen one or the other. The PCI Express slot is x16 so you should be able to plug in any decent graphics card if you start to tire of playing games at 10fps. Though you’re choices will be limited by how much power the PSU can provide, as there are only two spare Molex connectors.


The two PCI slots are occupied by a 56K modem and the aforementioned TV tuner card. The tuner card is obviously needed for your Media Center but who really uses a Modem anymore? And if you do, you should wake up and smell the broadband! 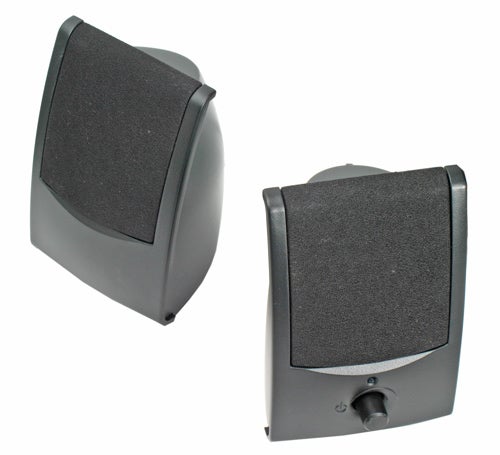 I was pleasantly surprised by the quality of the bundled speakers and I think they actually benefited from being just plain stereo rather than 2.1 as, even though they lacked the extra bass that a subwoofer would provide, they had a far more balanced sound than your average cheap set of 2.1 speakers.

The keyboard is well laid out and features a variety of extra keys for opening calculator, Media Center, and the like. Unfortunately the primary function of the keyboard – typing – was let down by soft, unresponsive keys. 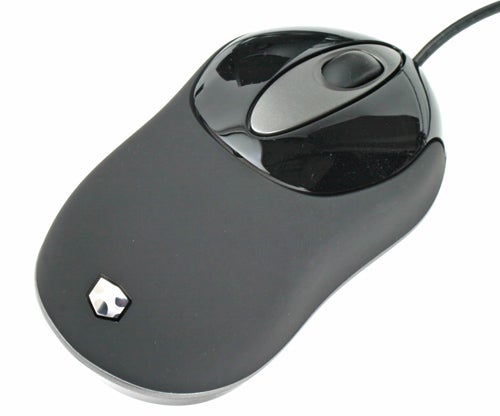 Thankfully the included mouse is a bit more of a success. The top surface is made of a soft touch plastic that provides a decent amount of grip and remained comfortable after prolonged use. It lacks Back and Forward buttons and isn’t the slickest mouse I’ve ever used but it tracks well and was fine for general office use.

When I turned the PC on for the first time, the Vista license had expired so I was unable to do anything – not a good start. Eventually I was able to recover the PC back to its original state using recovery software. Unfortunately the mess I was greeted with when I turned on the PC for the first time was no better. Aside from the usual anti-virus software and varios other background apps, Gateway had decided to install Google Desktop as well. Now I know it’s good to have competition and provide the consumer with choice but Vista has an inbuilt search engine and Gadgets so why on earth would you want Google desktop? That was quickly uninstalled. After getting back to a relatively clean installation I was able to begin testing in earnest.


To test the performance of the PC, I ran our usual set of benchmarks – those that work with Vista, that is. 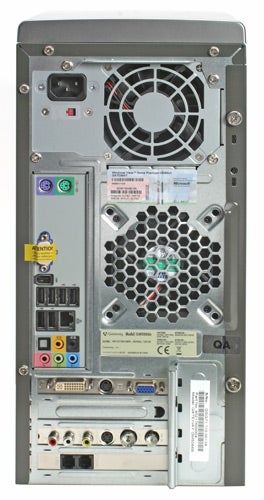 Our first test uses Photoshop Elements multi file processing capabilities on a set of 382 6-megapixel JPEGs. Photoshop performed all the quick fixes (Auto Levels, Auto Contrast, Auto Color, and Auto Sharpen), resized the image to 640 pixels wide, while maintaining proportions, and then exported to a separate folder as a high quality JPEG.


The second portion of our testing is based on the popular file compression utility, WinRar. We first compress a 282MB (15min MPEG-2 encoded) portion of video with WinRAR’s highest quality compression and password encryption. This is then decompressed and decrypted. Then, the same processes are repeated, but with our selection of 382 photographs.


The third section of the testing involves Audio encoding using the Lame standalone MP3 encoder. We both compress and decompress the entire album “Music” by Madonna, using a high quality variable bit rate. This is done using both the Microsoft compiled and Intel compiled version of the codec to keep things fair when comparing platforms.


Finally, we ran our usual set of 3D benchmarks. With the exception of 3DMark06, these use custom game time demos which are performed with absolute maximum in game detail settings.


As a comparison, for 2D performance, I’ve used our results from the Evesham Solar Storm 731 we recently looked at. It’s a more expensive machine but if you strip away the extras, like the monitor, 2.1 speakers, and better graphics, you get a similar specification. 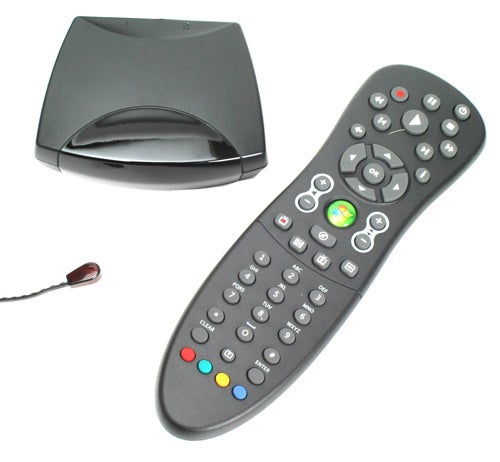 It’s no surprise that 3D performance was pretty abysmal and, though I’m sure you could find playable settings for most of your games, you would have to seriously compromise with resolution and detail settings.


2D performance was more encouraging as the Core 2 Duo once again showed its prowess – even a low end version such as this E6300. If you just want a PC for general office duties, you won’t be disappointed.


Looking around it seems Tesco has managed to cut quite a deal with Gateway as you’ll struggle to find a similarly specified PC for this price, without resorting to building the thing yourself. However, the complete lack of customisation means if you would rather have a bit more graphical power than a Media Center remote, say, you’re out of luck.


The Gateway GM5066B certainly has a few shortcomings but the impressive price tag mostly makes up for them. It will zip through any office tasks with ease and has a full complement of multimedia goodies to round out the package, making it the perfect all-round PC for the new buyer or student. So, if you don’t mind having all the stickers and labels on your PC then you won’t be disappointed.