What is the Garmin TruSwing?

Garmin’s TruSwing is one of the numerous golf-training aids that have burst onto the market to help players improve their swing consistency and, ultimately, get them shooting lower scores. Using an accelerometer and gyroscope, the TruSwing collects a multitude of data, including swing speed, club path, face angle and shaft lean. Garmin claims that it can help you improve distance, direction control and achieve optimal ball flight, but does it really deliver? 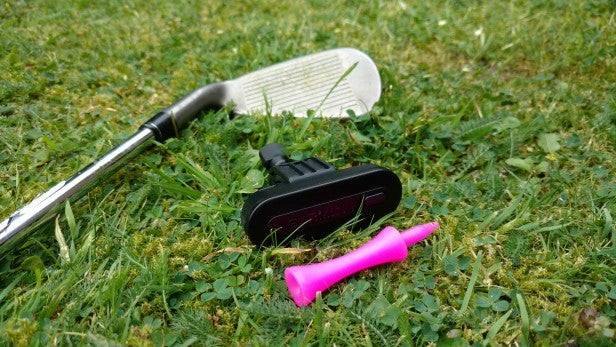 The first thing I noticed about the TruSwing was its plain and chunky appearance. It’s not going to win any beauty awards, but that’s okay because it’s all about function. The all-black unit has the Garmin logo engraved on the front, a single on/off button, and an LED indicator to let you know when it’s synced, charging and also when it’s running out of battery.

Build quality is solid, with no give in the main plastic body. The robust shell is backed up by an IPX7 certification, meaning the sensor can withstand elements such as rain and snow. While this is a welcome feature, the sensor is likely to be used within a driving range, the majority of which are shielded from the elements.

Getting up and running with the sensor was easy. The instructions specified that I had to clamp the hinge underneath the grip and tighten the built-in thread. This process was fiddly, as I had to ensure the sensor was perfectly lined up with the club face to ensure accurate readings. When you’re in a rush to clamp the TruSwing onto your next club, it can be all too easy to get the alignment wrong and have to make an adjustment. As a faster player, I also found having to constantly switch the sensor from club to club interrupted my rhythm on the driving range.

Also, while the moving parts look robust enough to begin with, I soon saw wear and tear taking its toll on the hinge and thread, which could impact the lifespan of the product. 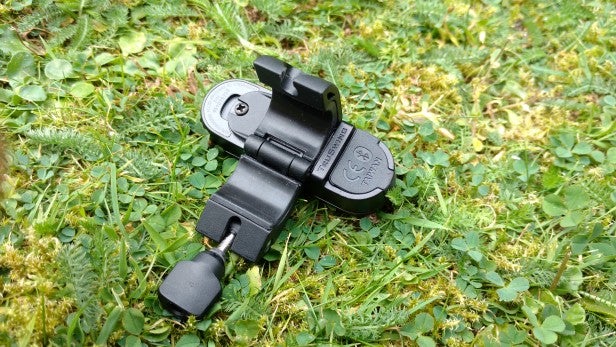 Setting up the software was straightforward. I chose to use the device in conjunction with my Samsung Galaxy S5, as it was more convenient at the driving range than taking an iPad Air 2. The first thing I was prompted to do was download the Garmin Connect App from the Android Play Store. I was able to sign in using a Google account, which considerably sped up the process.

The Connect app then asked me to pick the device I wanted to sync from a list, and once Bluetooth was fired up, the devices paired in seconds. In-app customisation is basic – I was only asked to fill in my gender and whether I was right- or left-handed. The final stage required me to select which club I’d attached the sensor to and then I was good to go. All in all, it took less than 10 minutes from opening the box. 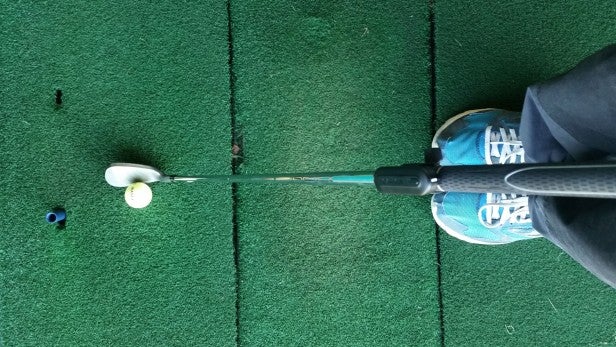 There were two things I was worried about when I first attached the sensor to my 9-iron. I was concerned about adding weight to the clubs and whether this would have an impact on my swing, and also whether the flashing blue light on the sensor would be a distraction when swinging the club. Neither proved to be a problem.

At 28g, the TruSwing weighs the same as a Daim Bar and I didn’t notice any difference when swinging. Similarly, the blinking LED didn’t turn out to be as much of distraction as I thought, perhaps because I’ve become accustomed to planes flying overhead, dogs barking and other people talking while playing at my local course in Stockwood Park.

Garmin uses the same Connect app for practically all of its fitness wearables, but for the TruSwing the only part you’ll care about is the swing analysis section. By default this displays an animation at the top and ‘club speed’ and ‘tempo’ as primary metrics.

As a 19-handicapper, I don’t have the fastest club-head speed, so I wasn’t surprised when the TruSwing reported that I was swinging my mid-irons at the 70mph mark and maxing out with my driver at 80-85mph. These figures were on par with previous readings I’d achieved with the original Zepp Golf 3D sensor.

Even though I was familiar with the data being collected, I found it a bit overwhelming and ended up focusing on one or two metrics per session – usually club-face angle and club plane to help cut out slices. 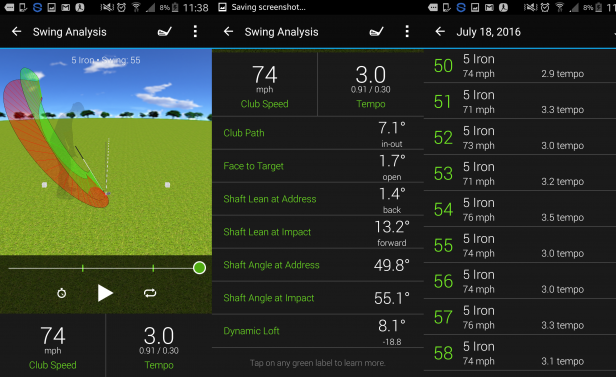 Not only did I feel like the app was throwing numbers at me, but the presentation on the TruSwing smartphone app was a big letdown. It wasn’t immediately obvious that I had to swipe up to see stats other than club speed and tempo once a swing was recorded. The latest swing stat isn’t placed at the top, so it means having to scroll down when you want to check your last five swings, for example. It’s tedious when you’ve taken 50 shots, and it just doesn’t make for an intuitive experience.

I found myself missing the Zepp golf sensor, which colour-coded each metric and rated my swings out of 100. This eliminated any guess work and made it much easier for me to see which parts of my swing were strong and the areas that needed work. It also made practice at the driving range far more rewarding, as I had something to aim for and felt a buzz whenever I achieved a high score in the range of 90+.

While my experience with the Connect Android app wasn’t the best, data on the TruSwing can also be represented on one of the many Garmin golf watches, such as the Approach S4. This delivers stats straight to your wrist after every shot – if you’re willing to splash out an extra £230. 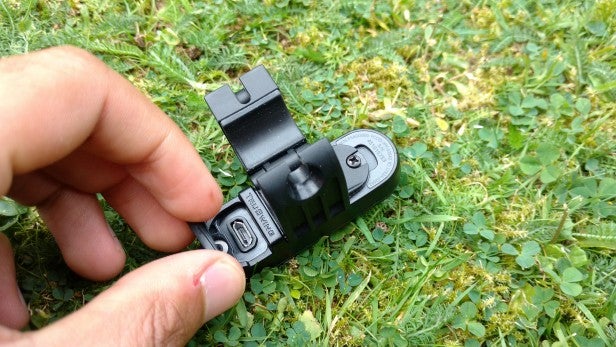 Garmin claimed 12 hours of usage on a single charge for the TruSwing. Exactly how many range sessions this translates to will depend on how many balls you hit. During three visits to the range, I hit 100 balls and still had juice to spare. On the back, a soft little rubber tab covers a Micro USB port. This popped off easily when it was time to charge the device. Charging was reasonably quick, and I got the sensor from zero to fully charged in a little over two hours.

Should I buy the Garmin TruSwing?

It feels like plenty of thought has gone into the collection of data with the TruSwing, but not into its presentation. Having to physically transfer the sensor from club to club is one of the most irksome features, though, which you’ll need to be comfortable with doing if you’re going to invest £130.

As a first-generation product, the TruSwing shows promise, but there are plenty of areas for improvement. It’s best suited to mid- to low-handicappers, who understand the specific areas of their swing they need to work on. The stats will overwhelm beginners, who are better off spending the money on lessons so they can nail down fundamentals such as grip, address and alignment before tinkering with their swing.

The Garmin TruSwing shows promise, but the presentation of its data needs refining