Although the main focus of attention for GPS technology has been on automotive navigation, it has many more uses other than helping you drive from A to B. If you’re out hiking in the wilderness, knowing where you are and which direction you should be going is equally essential, and potentially a life saver. Previously, a GPS was good for getting your coordinates, but the built-in maps paled in comparison to traditional Ordnance Survey paper. Now, at long last, Garmin’s Oregon 300 addresses those needs, offering a full range of digital OS maps for the UK, plus plenty of useful and fun extras. 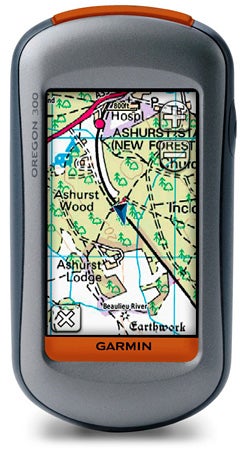 The Oregon 300 is a sturdy device, encased in shock-resistant plastic, and certainly feels capable of handling life in the great outdoors. It measures 5.8 x 11.4 x 3.5cm (W x H x D), weighs just under 193g, and is waterproof to IPX7 standards, which means it can withstand 30 minutes at depths down to a metre underwater, so even torrential British rain shouldn’t be a problem. An industrial-strength karabiner locks onto the back, built of solid aluminium and similar to the kind found on mountaineering gear. This allows you to hook the unit somewhere convenient about your person so you don’t lose it. 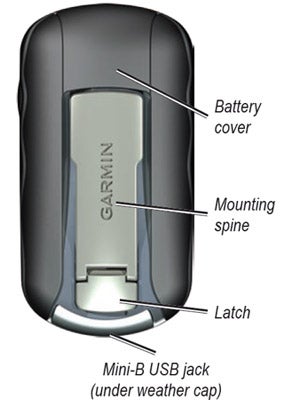 The karabiner attachment conceals the catch securing the back of the device, so you can’t accidentally open it when out and about. Inside, can be found the slots for two regular AA batteries, and underneath that a MicroSD slot. As standard, the Oregon 300 comes with basic world maps, showing major highways and cities, plus shaded contours. But these are not particularly detailed, so you will want to add a MapSource-compatible map with more features. This will primarily be via preloaded MicroSD, but there is also 850MB of memory onboard for loading data via the Oregon 300’s USB port and a desktop computer. 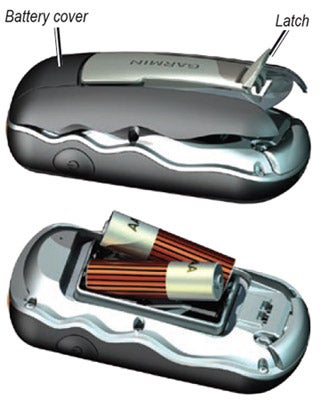 We were sent a Garmin GB Discoverer map on MircoSD covering national parks of Great Britain with a 1:50,000 scale, but 1:25,000 scale maps are also available for specific national parks and trails, such as the Peak District or the Ridgeway. You can find out more details of map coverage here. The GB Discoverer maps are based on Ordnance Survey data, and such quality does not come cheap. The 1:50,000 data costs £79.99, and each 1:25,000 set £129.99. When you can pick up the paper versions for £7.99 apiece, digital hiking looks like an expensive option. You could also install cheaper TOPO maps, but these don’t have a very good reputation for detail. The OS map options are the Oregon’s killer feature.

Of course there’s a whole lot more you can do with the Oregon than any paper-based map. Apart from the rubber on/off button on the side, the entire interface is operated via the 3in, 240 x 400 pixel, touch-sensitive screen. Thanks to the transflective display, the Oregon 300 is readable in bright sunlight. We were lucky enough to be testing on a rare sunny April day and found that a bit of hand-shielding was sometimes required, but the screen was never illegible. 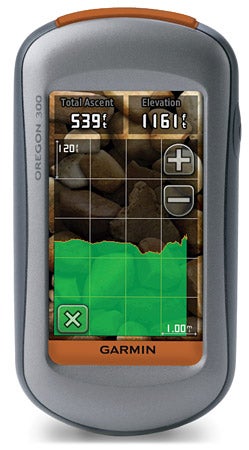 Basic navigation involves creating waypoints to steer your hiking. You can then use the Compass screen to direct you to a waypoint. Multiple waypoints can be defined to create a route, with room for up 1,000 waypoints and 50 routes in total. But you can also record tracks of your favourite walks as you travel, then use these to guide you along the same path at a future date. You can store up to 20 tracks comprising 10,000 points in total.

The 300 can be set for different profiles, ranging from recreational to automotive, marine and fitness. This primarily changes how information is displayed on the main route screen, but with an appropriate map set you can also enable turn-by-turn commands.

There are numerous handy extra features packed inside, too. Calendars including rising and setting times for sun and moon and the best times for hunting and fishing are built in. There’s an alarm clock, calculator and stopwatch. A trip computer provides an odometer, average and maximum speeds, plus elevation. You can use the 300 to calculate an area with a built-in widget. Just walk round the perimeter of the area, and Garmin will work out its size for you. There’s a wireless link for sharing waypoints, tracks and routes with users of other Oregon and Colorado GPS devices.

During testing, we did find that the Oregon was susceptible to losing GPS lock when tree cover occluded the sky a little. But it was also very quick to relock when we entered a clearer area. This might make walking in deep forests slightly hit-and-miss, but we didn’t find any difficulties when navigating light woodland. The Oregon 300 will last for 16 hours of continued use on a pair of AA batteries, too, so it’ll have plenty of juice if you do go off track, and the use of standard cells means you can always have replacements handy just in case. 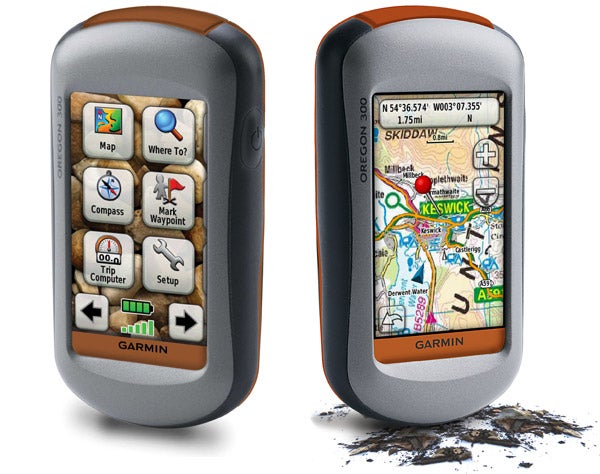 The Oregon 300 isn’t just for serious hiking, though. You can also download Geocaches to the device and then use it to find their location. You can also play Whereigo location-based games. A tutorial comes preloaded with a relatively amusing sci-fi exploration theme, and you can download further cartridges or create your own via the Whereigo website.


You will need to be relatively serious about your hiking to spend at least £300 on the Oregon 300 plus Ordnance Survey maps. However, the Oregon goes well beyond what a basic handheld GPS can offer, or indeed any handheld GPS before. The Oregon has a much larger map screen than previous outdoor Garmins available in the UK, too, making it a viable alternative to paper maps.


There is a cheaper 200 version with less memory and no wireless link, and a 400t model which comes with European Topographic maps preloaded. But the 300 is only slightly more expensive than the 200, and the 400t is £60 more, making the 300 best value overall. With the fun location-based gaming additions as well, it’s an ideal gadget for those who love the outdoors life.