What is the Garmin nuviCam LMT-D?

The nuviCam LMT-D is a 6-inch sat-nav combined with a built-in camera.

Drivers and cyclists have increasingly been feeling the need to retain a record of their journeys for protection, so have been keeping cameras in their vehicles or on them. But, in a car, a separate camera such as the Garmin Dash Cam 20 adds to the windscreen clutter and the fuss before you set out on the journey.

By combining both sat-nav and camera into one unit, Garmin aims to simplify matters – both in terms of space and usability.

The nuviCam LMT-D is a relatively hefty 6-inch sat-nav; the camera is at one end, making it slightly bulkier at that point. Not only can it record footage of your journeys in case proof is needed of an incident, but it potentially offers some additional safety features as well.

The nuviCam’s dashboard camera sits in the left edge on a rotating mount. The fact that you can angle it only horizontally, rather than vertically, could be an issue. The design of the mount is a little odd. At first I thought it would be necessary to install it upside down in my test cars, which both have very steep windscreen angles and deep dashboards. But in fact there’s a hidden hinge on the suction cup to make installation more flexible.

Either way, I found I had to place the nuviCam further up my windscreens than I usually place sat-navs, otherwise the camera would only record excellent-quality footage of my dashboard. There have been complaints about how much windscreen this sat-nav obscures. I have frequently used a 6-inch sat-nav without any safety issues, but the sheer size of the nuviCam could be a problem for some. 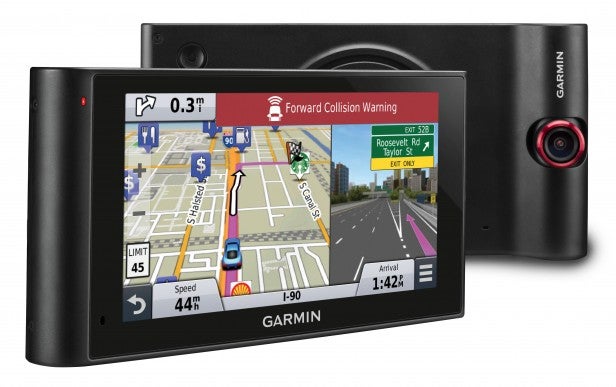 To record, simply trigger the big red button on the top of the wider edge of the sat-nav containing the lens. This then carries on recording until you decide to stop, dividing footage into one-minute 60MB chunks. Video is captured at Full HD, 1,920 x 1,080 resolution, and the 8Mbits/sec data rate allows for reasonable quality, although you do need to be quite close to other vehicles and in good lighting to easily read their number plates.

The nuviCam sports two microSD card slots. One is the usual expansion port found on a sat-nav for installing custom maps, with the other dedicated to the dashboard camera. A 4GB card is included as standard for video recordings.

At 1MB per second of footage, that will be enough for more than an hour of recording before it begins to recycle space by recording over old files. This should be enough to capture everyday driving incidents, or you could upgrade to a 64GB card for nearly 18 hours of storage.

The camera can also allegedly provide collision and lane departure warnings, by detecting the road and car proximity. However, this didn’t kick in through testing, and it didn’t seem safe to court danger just to try out the features. I’d also put my trust much more in systems built into my car, which I know work having tried them out before on a test track. Still, these features are more of an added bonus than the main reason for purchase. The dash camera works well as a camera.

The camera may be the main feature of the nuviCam then, but this is also a premium Garmin sat-nav. In particular, it sports Garmin’s Digital Traffic via DAB radio. There’s a DAB receiver built into the nuviCam, which allows the device to grab traffic updates every minute – far more frequently than the 15-minute intervals of RDS-TMC’s FM-based system.

During testing, Garmin’s Digital Traffic did show itself to be accurate, and on one occasion it was quick to react to a recently developed jam. It’s hard to say whether it’s equal to TomTom’s excellent Traffic service, but during my journeys it certainly seemed to be more proactive than RDS-TMC devices I have reviewed in the past. Coverage is better than just motorways and A-roads, including minor roads too.

The nuviCam comes with a lifetime subscription to Digital Traffic. However, it’s worth noting that outside the UK and Northern Island, Digital Traffic is only available in Belgium, The Netherlands, Germany and Norway. For other European countries, the nuviCam also receives standard RDS-TMC, which covers most of Europe apart from Portugal.

Since the Digital Traffic service uses DAB, the nuviCam doesn’t have its own built-in mobile data connectivity. So you’ll need to pair the device with your smartphone to receive interactive live services. This includes obtaining more detailed information about Foursquare points of interest (POIs), although the basic Foursquare POI locations can be searched without the data connection.

Beyond the dashboard camera and live features, the nuviCam offers the usual interface and capabilities of Garmin’s current premium devices. The menu provides two main options – Where To? and View Map – plus access to supplementary apps. These include a Dash Cam app that allows you to view your recorded videos along with a live updating map showing where they were recorded, and more can be added.

The Where To? destination entry system uses a single keyword search across addresses and POIs. There are separate icons for finding restaurants, petrol stations, and Foursquare-derived POIs in the local area. There’s also a panel on the right providing access to favourites and recent destinations, as well as the full POI system. The underlying maps cover the whole of Europe, with lifetime updates available for free. 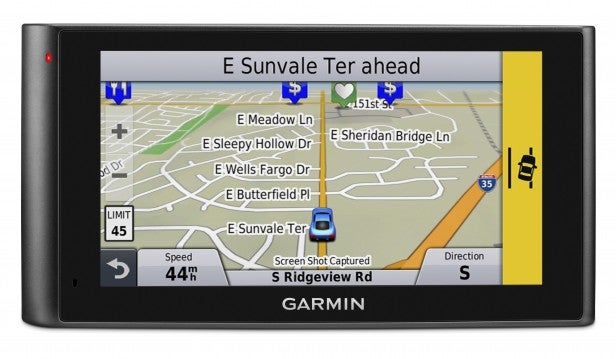 The navigational interface is standard for a Garmin sat-nav. The map is clear, with a little more incidental detail than TomTom’s latest models. The current speed and direction can be found along the bottom, the next turning is at the top, and there’s a right-hand panel that can be configured with a variety of information, but will also display any traffic jams detected.

This aspect of the nuviCam isn’t different from other Garmin sat-navs we have reviewed, but Garmin traditionally provides an effective navigational experience.

Should I buy the Garmin nuviCam LMT-D?

The Garmin nuviCam LMT-D is certainly an innovative product. It makes complete sense to have your in-car camcorder built into your sat-nav, so you need only one device. It’s a little flawed in execution, with the size being the main issue. As I mentioned earlier, 6-inch sat-navs are pretty big, and the nuviCam LMT-D is even wider than TomTom’s GO 6000. If you’re concerned about blocking out your view of the road, this might not be the device for you; a 5-inch sat-nav might be a better choice.

There’s another drawback, too. Garmin claims only 30 minutes of battery life, and our experiences confirm this, or even worse. Effectively, you can’t use the nuviCam on battery for a journey.

However, with these problems taken into consideration, the nuviCam LMT-D provides a lot of features for the money. The traffic works well, there are lifetime map updates, and the dashboard camera’s core feature of recording video works well – which could be useful if you’re involved in an incident not of your own making.

A sensible combination of sat-nav and dashboard camera, although the resulting size could be an issue for some drivers.