Garmin may not have quite bettered TomTom’s mobile data technology, but its nuvi 3790T certainly has the upper hand where physical design is concerned. The bad news is that the new nuvi 2460 LT doesn’t mimic the 3790T’s design. The good news is that it incorporates most of the earlier model’s features, plus a few extras.

The main extra is the screen size, which is 5in diagonally rather than 4.3in. However, the resolution is a lower 480 x 272, and multi-touch is not supported either. The chassis is not the svelte form of the 3790T either. However, the 2460 LT does offer a convenient unified car screen mount. The car power adapter connects directly to the mount, so you can simply hook the device to the mount to plug in power. Similarly, a single motion unhooks the 2460 LT. 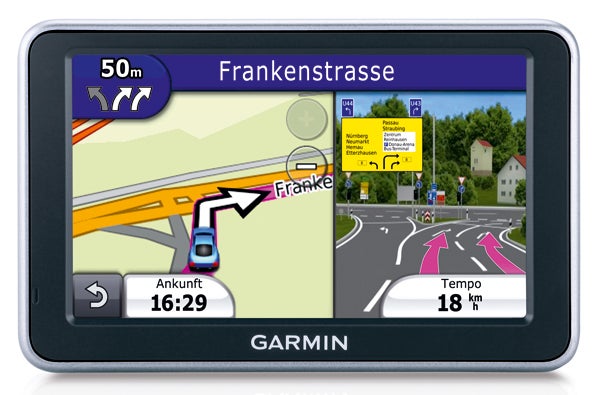 The menu system remains Garmin’s classic design. There are just two main icons, taking you to the map or the destination entry options, plus a selection of supplementary icons along the bottom of the screen. You can now customise this interface, however, and change the position of icons as well as add some extras down the right-hand side.

Choosing an address or Point of Interest (POI) is similarly no change from previous Garmins. You can enter an address by city, street and house number, or postcode, and you can look for a POI by category. Both offer keyword search, handy if you don’t know the city your street is in or the category for your POI, but you can’t search across both simultaneously, unlike Mio Navman and Motorola devices. 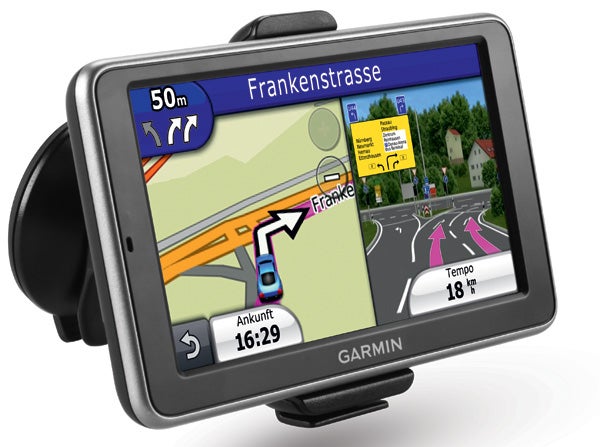 When you have chosen your destination, the MyTrends and trafficTrends systems are called into play. The former takes your driving preferences into account when calculating your route, although how this affects road choices isn’t very clear during real world usage. The trafficTrends system is similar to TomTom’s IQ Routes, using actual historic road speeds rather than nominal limits, so notorious jam black spots will be avoided during rush hour, for example.

One of our favourite features of the 3790T, other than its design, is the voice control system. Garmin’s nuvi 860 was our recommendation for voice control a few years back, but it’s no longer available, and used a remote installed on your steering wheel to initiate the process. Like the 3790T, the 2460 LT’s voice commands are enabled with a simple key phrase, which is fully customisable. So you can control the device entirely with spoken commands.

Most of the functions of the 2460 LT are recreated verbally, with prompts at each stage to let you know what’s available. It’s even possible to enter a postcode this way. We found the system extremely reliable, so long as there was no loud music or background talking. Whilst we still wouldn’t quite recommend using the 2460 LT whilst driving, as glancing at the menus will be distracting, it’s much safer than using your fingers.

The ecoRoute system, which Garmin has been offering on its sat-navs for a few years, has a few extra features. Once you have input the urban and extra-urban miles-per-gallon figures for your car, plus the current cost of petrol, you can now also record each refuelling stop, giving you a complete picture of petrol usage and your car’s real economy. As before, you can challenge yourself to drive as efficiently as possible, with an icon in the map giving you a score out of 100 to indicate how you are currently doing.

There are a few useful extras to be found in the Tools menu. The ‘Where Am I?’ function presents your current location, and provides quick access to useful POIs for an emergency. You can track down the nearest hospitals, police stations and petrol pumps, but the roadside assistance is limited to a number for the AA, which won’t be so handy if you’re with another breakdown cover provider. 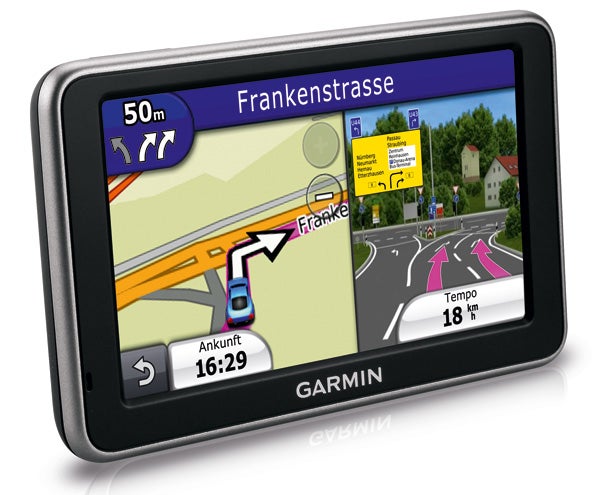 The 2460 LT comes with traffic updates enabled as standard. These are the RDS-TMC variety, so arrive via FM radio transmission. The receiver is built into the car power adapter, and you then plug the aerial into this and loop it round your windscreen with suction attachments. A lifetime subscription is provided for updates in the UK and a variety of European countries. The usual event browsing and rerouting functions are available.

The navigational map is essentially the same as previous Garmin sat-navs. Roads are clearly marked, and there’s a reasonable amount of information along the bottom about your trip, including the estimated time of arrival and an icon indicating the next turning. One addition here is the PhotoReal Junction View. This is the familiar full-screen graphic most premium sat-navs now offer at complex motorway interchanges, telling you which lane to be in. Except that the image is more realistic than before, and as the 2460 LT has such a large screen, Garmin doesn’t actually make it take up the entire screen. Instead, the display is divided in half, with the map remaining on one side and the PhotoReal Junction View on the other side.

Garmin Locate marks your current position when you remove the nuvi 2460 from the cradle, a feature Navigon also offers and very handy if you forget where you parked your car. A Bluetooth transceiver is built in, so you can pair your mobile phone with the 2460 LT and use it as a hands-free kit.

The Garmin nuvi 2460 LT doesn’t have the physical design advantages of the 3790T. But it does offer a solid sat-nav specification. It has plenty of features, a 5in screen, and European maps for just over £200, making for great value, and the voice control system is the best on the market. So if you’re after a full specification with a little bit more display real estate, it’s well worth considering.