In vehicle navigation devices have never been as popular as they are now. Not so long ago driving along with a box attached to your windscreen made you look a bit strange – now, its commonplace.


Garmin has been into GPS for longer than most but its forays into the world of portable navigation systems have not always been as successful its fans might have hoped. Its GPS-toting handhelds of both Pocket PC and Palm varieties have taken a while to bed down into usable devices. But with the nüvi, Garmin really does seem to have broken some new ground – in a good way. 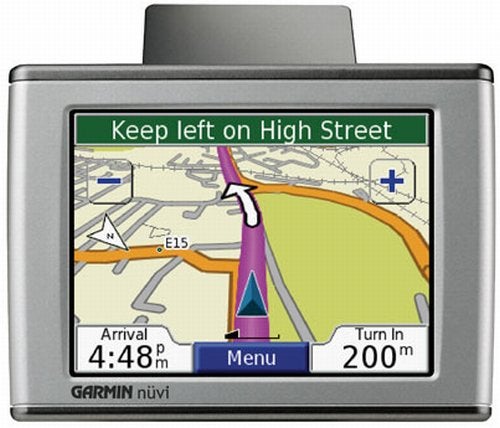 The nüvi 350 is not inexpensive though and your first question will be to ask what that hefty price tag buys you. Well primarily it’s a navigation system with 700MB of memory containing maps of the whole of Europe. However, it’s not ”just” a navigation system. It can also handle MP3 music, pictures, audio books, currency conversion, calculations, travel dictionaries and city guides. Plug it into your PC and it acts as a USB mass storage device onto which you can pop files for playing through it, or simply files you want to carry from one place to another.


The £634 price tag is Garmin’s suggested selling price. Shop around and you should find it for less, but even so it’s still going to be a fair wedge and that’s before you start buying the extras such as city guides, dictionaries, or the £196 on the live TrafficMaster traffic updates. On the upside, this is a lifetime subscription.


Garmin also has a cheaper alternative available – the nüvi 300 at an RRP of £380. It looks very similar, but you’ll miss out on the ability to use quite as many extras, as the internal memory is limited to 200MB, and you don’t’ get the maps of all of Europe, just a selected area. 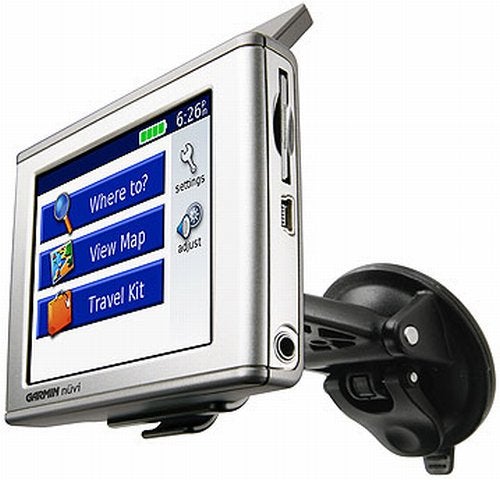 The nüvi 350 is pretty thin and measures just 98.3 x 73.9 x 22.1mm and weighs 144g. The GPS antenna folds out of the rear, which negatively affects the neat look. The 320 x 240 display is touch sensitive and 2.8in in size. The sides house just a power switch, a USB jack for mains power, car power and PC connection, and 3.5mm earphones jack.

There also an SD card slot, which is the format on which language and travel guide add-ons are sold. If you’re using the nüvi 350 as a USB mass storage device you can access SD memory as well as the internal storage. You also get a USB PC cable and a carrying case, as well as a small sucker style vehicle mount which works very well. 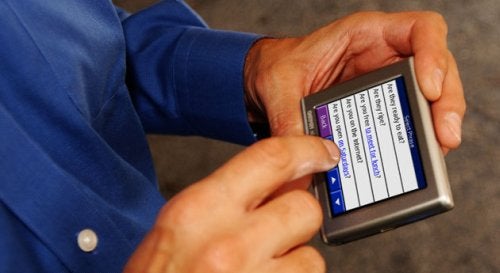 The extras integrate well. Choosing a word in the sample translating dictionary provided resulted in the opportunity to listen to the spoken word, though I can’t see why the spoken word is offered in the originating language and not the one you want to translate to. You can use the Travel Guide to find a place and view it on a map and then tap the ‘Go’ button and get directed to it immediately.


All your interaction with the software is done via the touch sensitive screen, with icons that are large and easy to prod. Most importantly you can enter full postcodes for navigation. A postcode and a building number are usually all that’s needed to get a trip underway. The SiRFstar III GPS antenna worked perfectly during test, and we even managed to use the nüvi 350, while sitting indoors by a window.


Spoken directions are loud and clear – in fact, I had to turn the volume down, as at its highest level it was too loud. Bizarrely, if you would like it, you can get the nüvi 350 to ‘beep’ at you before an instruction is announced –just to make sure it has your attention.


Routing round traffic problems was a breeze. A quick tap on a button marked ‘menu’ on the main navigation screen offers the option to ‘detour’ at which point a new route is quickly calculated. 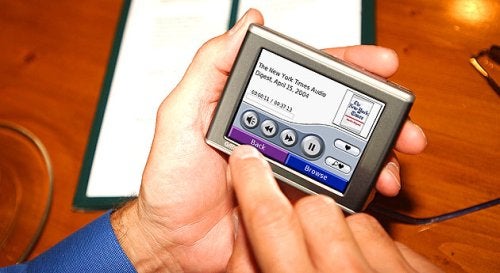 The main map screen itself has little clutter. As on the TomTom GO, transparent ‘-‘ and ‘+’ markers enable you to zoom in and out, while the menu button is flanked by left and right icons displaying travel information. You don’t get a diagrammatic representation of the next turn, but if you hit the right button, which tells you how far it is to the next turn, you get a repeat of the spoken instruction and the screen changes so that half of it shows the turn in map detail and half of it gives a written description of what to do. This means that a quick glance is all you need.

The left button shows your estimated arrival time, and tapping this gives you a range of odometer type details such as average speed, maximum speed, journey time and so on. 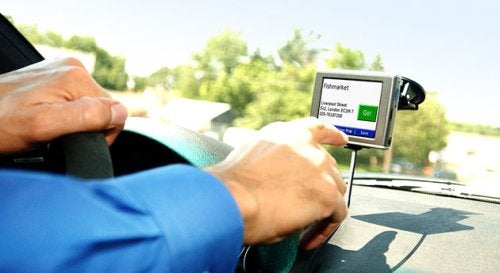 In all the whole thing felt smooth and intuitive to use during test trips, as far as navigation was concerned. I did have some issues with the added extras, though. The audio book player is tied in to Audible, the music player only like MP3s and the image viewer only likes JPEGs. You can find this out by trial and error or by downloading the full manual from the Web which lists file compatibility. Garmin really should have included this with the product, and we can’t forgive its failure to provide more than a printed quick reference guide in the box or even the manual on CD. Shame on you, Garmin.


As I said at the start of this review, Garmin has broken new ground with the nüvi 350, taking standalone navigation software into the realm of data storage and added features that is usually found in handhelds. It is a shame the file compatibility is not broader, but in general I like the idea. Mosy importantly though, Garmin has done a good job providing a competent navigation solution, which is its core business of. It is just a shame that, at such a high price, very few people are likely to be able to afford the purchase.