What is the Garmin Monterra?

The Monterra is Garmin’s first Android-based recreation GPS. It sits alongside models such as the eTrex Touch 25, sharing the same set of core functions, but the Android operating system means it can be much more readily extended. In fact, Garmin is touting the Monterra as a GPS for more than leisure activities such as hiking, Geocaching, and biking. The company is hoping that the device will deliver on the professional front too, for environmental managers, miners, contractors and even fire rescuers.

If you’ve owned any of Garmin’s previous recreational GPS devices then the first thing you’ll notice about the Monterra is that it’s rather large. The screen has a 4-inch diagonal with a 272 x 480-pixel resolution. It’s pretty weighty at 331g with the supplied lithium-ion battery pack, or an even greater 375g if you use three AA batteries instead. Putting that in perspective, an iPhone 6S weights just 192g.

This is a hefty beast, but it isn’t meant to slip unobtrusively into your sports jacket or trouser pocket as you gad about town. The casing is rugged, and is rated to IPX7 standards, which means it can withstand submersion in up to 1m of water for up to 30 minutes. In other words, this isn’t a diving GPS, but it should be fine if you drop it in a puddle or shallow river, and rain will do it no harm at all. 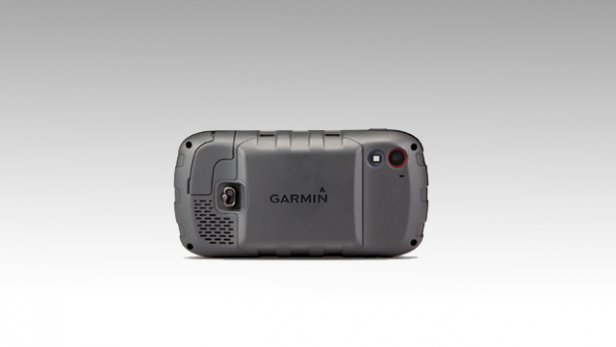 To this end, the battery cover has a screw-locking mechanism to keep it securely attached and prevent accidental opening. The mini-USB port and headphone mini-jack sit beneath rubber flaps. The screen has a tough covering that seemed pretty impervious during the review, although I didn’t want to put this too seriously to the test in a loan unit.

By modern smartphone standards, the screen resolution is pretty mediocre, and might limit the mainstream Android applications that can be run. But it’s also a fair bit higher than what you’ll find on many handheld GPS devices. The visibility of this screen in bright sunlight is pretty decent, so long as you avoid bright reflections on the shiny surface of the screen protection. In fact, it’s notably better than earlier Garmin handheld GPS devices I’ve tested.

Inside the Monterra is a 1.2GHz TI OMAP 4460 dual-core processor, with an Imagine Technologies PowerVR SGX 540 GPU. There’s only 663MB of RAM, which again seems a little paltry compared to the 2GB in premium smartphones nowadays, but I didn’t notice any memory-related issues during testing. For location acquisition, both GPS and GLONASS are supported, plus the terrestrial WAAS and EGNOS systems that allow for faster position locks and greater accuracy.

A 2,000mAh lithium-ion battery is included in the box, which Garmin claims will provide up to 16 hours of usage. But the unit can also be powered by three AA batteries, so you can carry some with you when on treks that go beyond the life of the rechargeable unit. A set of AA batteries should give you a longer 22 hours endurance, too. Aside from the USB-based charger and some screen protectors, no other hardware is included in the box. 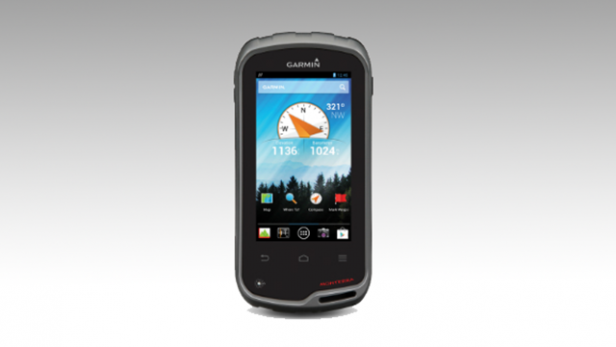 Starting up the Monterra reveals a relatively familiar Android interface, but with some Garmin GPS-related extra widgets. In particular, there’s an on-screen compass with elevation and barometric information underneath. This sits on the initial desktop, and you can swipe left and right to see four additional desktops. The usual Android back, home and options icons sit permanently at the bottom of the screen.

By default, the initial desktop offers icons for a mapping application, a more feature-rich compass, a quick waypoint marking tool, and a folder full of Google apps. The four app icons permanently at the bottom of the screen are the elevation plotter, a radio (which requires headphones to be attached to work), camera and search. However, all of this can be customised.

In the middle of the permanent icons is a link to all the preinstalled apps, and there’s a huge number of these available. There are 22 in the Garmin section, and more in the general section. You can also install widgets to different desktops, some of which are Garmin GPS-related such as the elevation plotting, which will be handy for rapid access to these features.

Your main app will probably be Map (Maps – the Google version – is also included). This can load a variety of highly detailed maps, such as Ordnance Survey ones. By default, the device comes with a World Land Basemap and Recreational Map of Europe v4, plus samples of some BirdsEye Select areas to coax you into an upgrade to one of these 1:25,000 Ordnance Survey-derived options, which cost £20 per country. 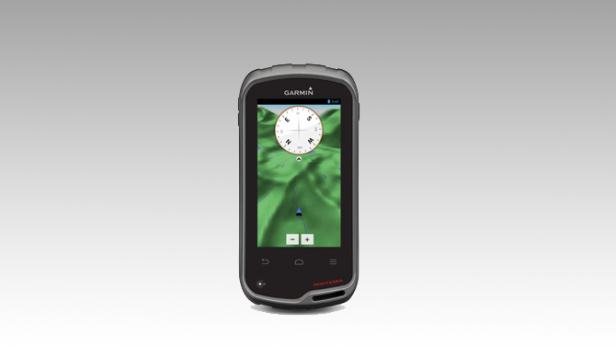 In contrast, the bundled Recreational Map is at a 1:100,000 scale, and doesn’t contain any street-routing information. However, it does show terrain types, all roads, and has some points of interest. The world Basemap shows just major cities and roads, so is really only good for getting your bearings.

Aside from loading commercial maps, you can use Google Earth or Garmin’s BaseCamp to save custom maps or waypoints to the device. And if you want to use the Monterra for navigation, Google Maps is available for turn-by-turn directions.

Lots of GPS-enabled extra apps are included. There’s an area calculator, which will prompt you to walk around the perimeter of a plot you wish to measure and will then tell you the area. Of course Geocaching is included, and there’s also a widget that can be installed to provide a quick heads-up on nearby geocaches. But the Monterra doesn’t come with a built-in database of geocaches. There’s support for chirp geocaching beacons, and a specific app for listing chirp beacons found.

There’s an app to set up alarms for when you’re in the proximity of a location, a route planner for creating routes out of waypoints, and specific apps for managing waypoints and tracks. There’s an app for browsing and loading adventures that you can add to the device using the BaseCamp software for PC or Mac. There’s even an app for marking when someone has fallen out of your boat, so you can find them again for a rescue.

The key thing to note, however, isn’t what comes preinstalled, but the fact that this is a fully fledged Android device; basically an Android smartphone without the phone bits, running Ice Cream Sandwich 4.04 out of the box. This is a little old, since it was released in March 2012, but in theory any compatible Android apps can be used. Besides, only those apps that are compatible will be listed in the Google Play store.

I tried loading a few random Android apps and games, and they all ran without a hitch. The Monterra is equipped with 8GB of storage on board, but only 6GB is available for apps, and only about 2.5GB of this remains with the default installations. It is possible to insert a Micro SD card under the battery to store Garmin data – but annoyingly, you can’t use this for installing more apps, which could be a hindrance in the long-run. 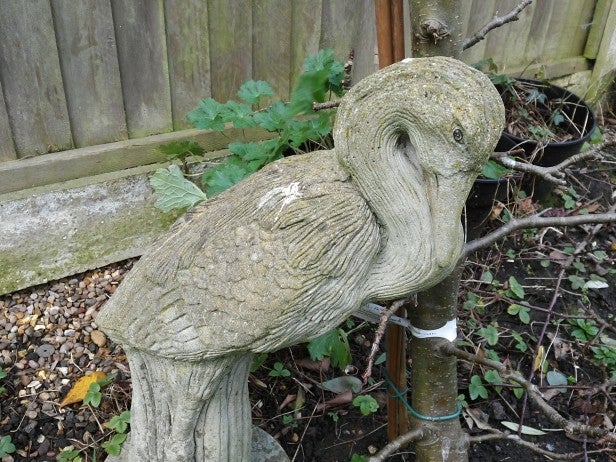 For a GPS, the camera is pretty good

Garmin has also included a decent 8-megapixel camera and LED flash, with the Monterra has 1080/30p video-shooting abilities as well. Everything you shoot will be automatically geotagged – assuming the device has a location lock – so if you need to survey an area and provide pictorial or audiovisual evidence, the Monterra has the necessary tools.

Should I buy the Garmin Monterra?

With an official price of £599.99, the Monterra’s extensive list of features don’t come cheap – but when you consider its abilities and extensibility, this isn’t as hideous as it sounds. The Monterra is a handheld GPS that can be configured to fulfil a wide variety of roles, both for leisure and professionally. It may be expensive, but it’s one of the most feature-rich handheld outdoor GPS devices on the market. Note that with a bit of searching, it is possible to pick up a unit for around £400.

The Garmin Monterra may be pricey, but it’s packed with features – and the Android operating system means that you can add even more.