The Forerunner 745 is a top notch fitness tracker and ideal companion for any serious or aspiring triathlete looking to take their workout to the next level. But its price makes it a very expensive luxury.

The Garmin Forerunner 745 is the latest wearable being pitched to hardcore cardio-fanatics looking for an all in one wearable.

It replaces the older Forerunner 735XT as Garmin’s upper mid-tier sports watch. At first glance may look like a modest upgrade on its predecessor, but, look a little deeper and you’ll find a number of key upgrades that make it one of the best fitness trackers on the market for established and budding triathletes or cardio-fanatics.

The only downside is that, despite previous rumblings of a price drop, the Forerunner 745 retails for a hefty £450, making it a seriously expensive luxury and less than £100 cheaper than the more premium Forerunner 945 and Fenix 6, which have much more developed feature sets. 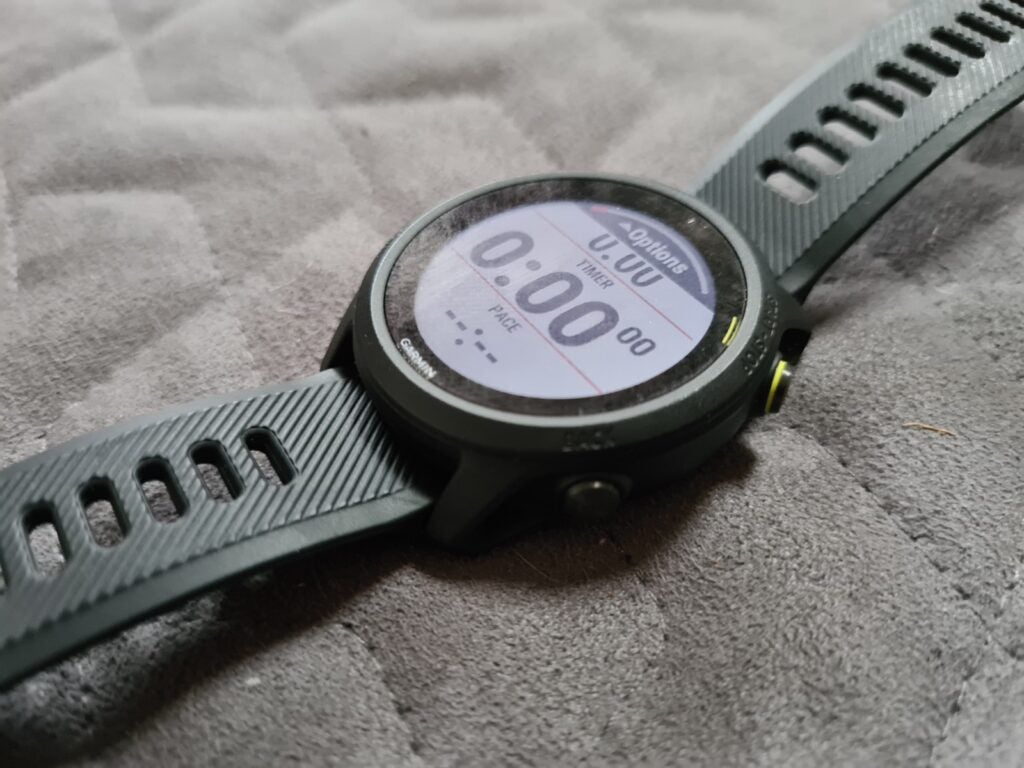 The Forerunner 745 refines, rather than reworks the 735XT’s design, which is in my mind no bad thing. I’ve always liked the Garmin Forerunner device’s designs. This is because, despite having an overt fitness focus and aesthetic, they strike a nice middle ground between Garmin’s fashion-focussed Venu and hardcore Fenix line of devices. This remains the case with the 745.

From a distance, it looks a lot like the 735XT featuring a Gorilla Glass DX watch face, fibre reinforced polymer bezel that’s surrounded by physical button inputs. It also retains the same custom charge port and 5 ATM water resistance rating. But up close you’ll notice Garmin’s managed to shave a few millimetres off the chassis.

This gives the device a solid, functional design that’s significantly more discreet than the chunkier Forerunner 945 and Fenix 6.

I’m also pleased that, despite the current trend to make fitness trackers more like smartwatches, like the Suunto 7 and Fitbit Sense, the Forerunner 745 remains true to its roots. This means that, once again, instead of a power-hungry OLED touchscreen, you’ll find an energy efficient 1.2-inch, non-touch, 240 x 240 resolution, transflective colour screen.

As ever the screen isn’t as bright as an OLED, but it’s great for battery life. Garmin’s managed to eke out more battery life despite reducing the watch’s size, quoting it as offering users 14 to 16 hours use in GPS mode, 6 hours in GPS and Music mode and one week in smartwatch mode.

With real world use I found the battery life generally rang true and generally managed to get at least 4-6 days use using the 745 as my main smartwatch and tracker. This included using it to track my morning workout and 2-3 5km runs per week with the GPS on.

Minor dimension and weight shavings and battery improvements aside, the biggest changes to the Forerunner 745, compared to the 735XT, have happened under the hood. For starters, Garmin’s added a few new sensors.

Other key changes include the addition of NFC connectivity and local Music playback, both on device and via streaming services including Spotify – which being honest was a glaring omission on the older 735XT. 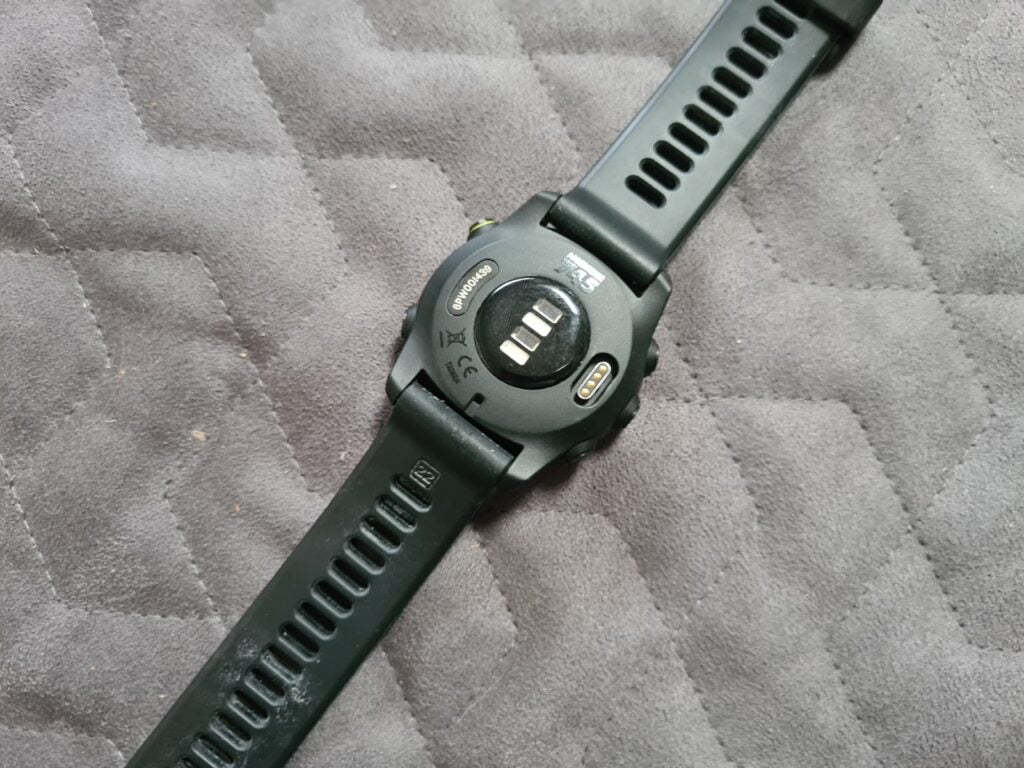 Garmin Forerunner 745 tracking – a sprint in the right direction

Garmin’s also made a number of changes to the software. Coupled with the additional sensors this lets it offer significantly more advanced tracking across more activities than its predecessor.

The main UI works in a similar way to most Garmin trackers. Once you have set up the device using the Garmin Connect app (iOS/Android/Windows), you can load it with custom watch faces, pick what apps and services you want and get going.

The UI is close to identical to the one seen on the Fenix 6 and most modern Garmin trackers. Pressing the left up and down buttons lets you scroll through a series of shortcuts to regularly used services, like the music player, weather app and newly added Pulse Ox reader, and more detailed workout performance data menus.

The top right button jumps you into the watch’s activity tracking options. At first this sounds fairly familiar, but the activities on offer are as robust as ever and the Forerunner 745 has a few key features that were missing on its predecessor.

For starters, it now pushes the training effect metric to the forefront of the workout menus and offers much more detailed guidance. Click on a workout and the watch will not only recommend the type of training you should be doing it’ll also automatically adjust the workout goals to meet it. For example, clicking the run feature the watch will recommend whether I should be pushing for this like benefits to my base or tempo. It’ll then give target distances and lap times to aim for based on previous workout data.

For those out of the know, training effect is a key metric Garmin uses to gauge the effectiveness of your workout. It factors in and breaks down key things like the aerobic and anaerobic benefit from each workout. This plus other factors like your heart rate and VO2 Max estimates are then used to recommend rest periods. The tech works great and is a key, easy to use, way to plan and enact a personalised exercise regime.

As ever on a Garmin, the activities on offer are plentiful. Though not on a par with the Garmin Fenix 6 line, the 745 can track everything from running to snowboarding and bouldering. It also has the same excellent multi-sport tracking, that lets you switch which activity you’re doing mid workout or race with the touch of a button.

But there are a few new tricks on the 745. The addition of the new sensors also let it track a few more performance metrics and activities than its predecessors. The main changes result from the addition of a barometric altimeter. This lets the tracker better track elevation, a key metric in every exercise from running to wall climbing. 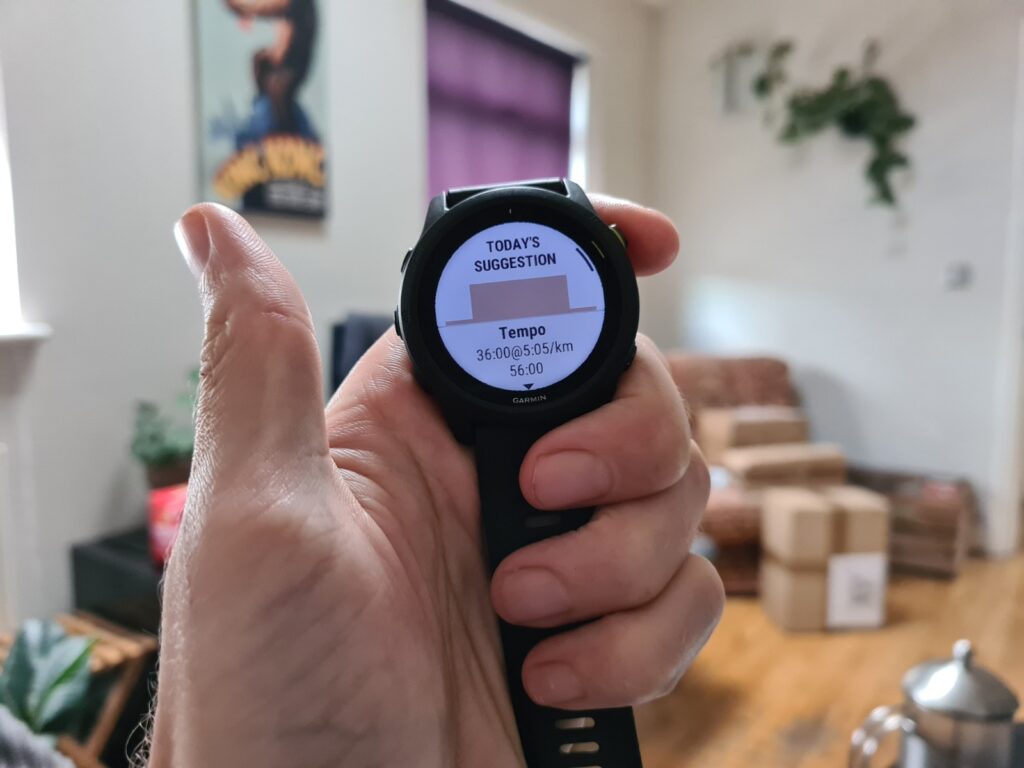 This means the post workout data is much more effective than its predecessor. As I was on the Fenix 6 Solar, I also remain a big fan of the post workout training effect metric, which offers a detailed breakdown of what, if any, benefits you got from the workout. The additional VO2 Max estimates and PulseOx reader add a further level of detail.

Stress and body battery tracking round off the watch’s new tracking features. Stress reading is a new vogue item on most mainstream wearables, and a primary focus on both the Apple Watch 6 and Fitbit Sense, and at a basic level it works a similar way here, with the 745 using biometric data and a few fancy algorithms to represent how stressed you are as a number/graph.

Body battery is a little more interesting. It’s effectively an energy reader for humans designed to let you know how much gas you have left in the tank. Specifically, Body it uses a combination of Heart Rate Variability, Stress, and Activity stats to display how much juice is left in your “body battery” using a sliding scale between 1-100.

With real world use I found, like most Garmins, tracking is generally excellent. The GPS was quick to connect and I never suffered any serious outages. Distance tracking is also accurate. Testing it on a track I know is roughly 5.3km it never threw up any serious irregularities.

Heart rate tracking tells a similar story. I never saw any serious anomalies and outside of a few hiccups when my heart rate skyrocketed during particularly intense HIIT sessions it performed admirably. During HIIT I noticed fluctuations in readings while the sensor tried to catch up. As ever, if you want truly accurate heart rate readings we’d recommend investing in an HRM strap.

So far so good? For the most part yes. There’s no denying the 745 is an excellent multi-sports tracker and clear step forward on the older 735XT. But, considering its high price it is missing a few features.

I can forgive the lack of Golf tracking considering the 745’s focus. But considering its price, a lack of offline map functionality feels weird. To get this you need to invest in the more expensive Forerunner 945 or a Fenix. Considering the Forerunner 745’s multisport focus this is a bit of a pain that makes it hard to plan and try out new routes on the fly. It’s also a pain for cyclists looking to use it for directions when navigating a new location or route.

People viewing this as an Apple Watch replacement should also be aware Garmin wearables’ smartwatch functionality is still very limited. Though you can use services like Spotify and there is an app store, the wares on offer are almost all to do with location services or fitness tracking. Outside of this its smartwatch functionality is limited to calendar and notification alerts and music playback. In the UK the NFC support is also not that useful as Garmin Pay doesn’t work with most of the country’ banks. 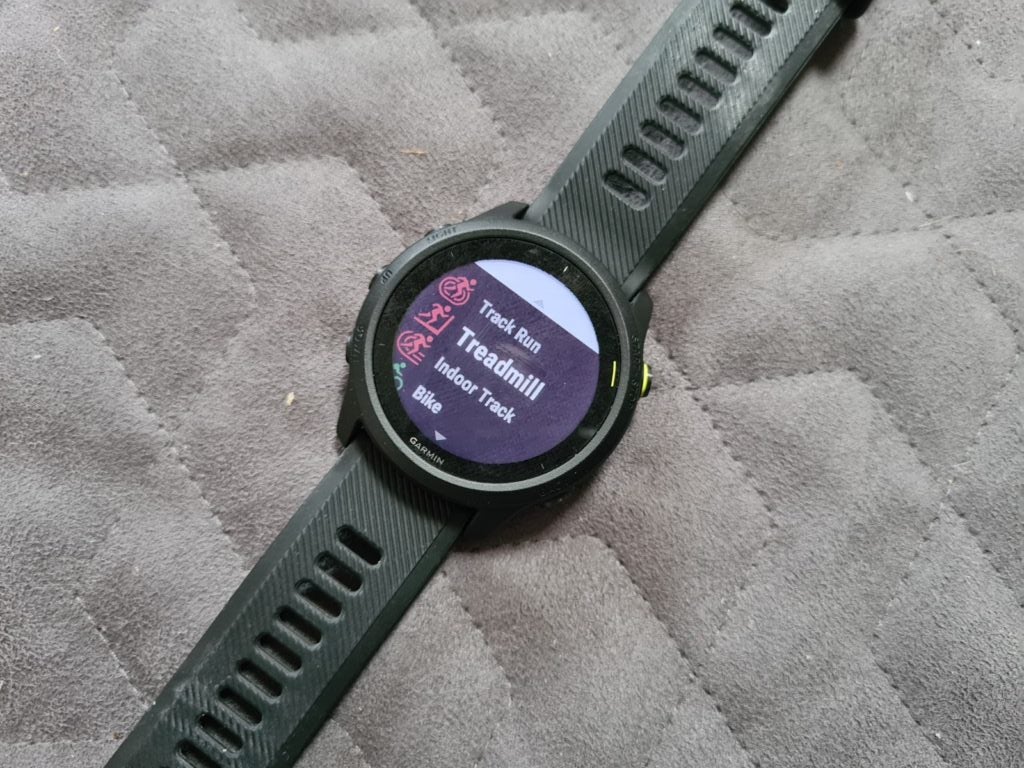 Should you buy the Garmin Forerunner 745?

The Garmin Forerunner is one of the best running watches on the market for triathletes and hardcore cardio enthusiasts. It has a robust feature set that makes it a clear upgrade on the previous generation Forerunner 735XT.

However, its pricing puts it in a strange place in the current landscape. For less than £100 more you could pick up the more developed Fenix 6 or Forerunner 945, which offer key things like offline maps.

More casual athletes could also grab an Apple Watch SE for a lot less, which has a reasonable selection of fitness tracking services and exponentially more advanced smartwatch functionality. If you don’t care about smartwatch shenanigans, the 735 is still on sale and a solid tracker for aspirational and mid-tier athletes, it also carries a much more wallet friendly £299 price tag.