What is the Garmin Forerunner 735XT?

The Garmin Forerunner 735XT is a hardcore fitness tracker designed for triathletes and those who become excited by the prospect of a Tough Mudder challenge.

It can be bought as a standalone unit (£360) or as a Tri Bundle (£450), which includes Garmin’s advanced HRM Tri and HRM Swim chest straps.

The Tri Bundle turns the Forerunner into one of the most powerful and comprehensive fitness-tracking packages available, but even on its own, the watch is powerful enough to offer great performance monitoring and coaching.

However, the watch’s high price alongside complexities with its advanced functions make it overkill for anyone but the most hardcore of fitness fanatics. 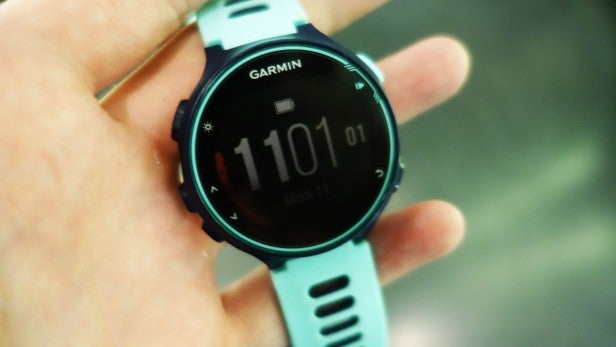 The Garmin Forerunner 735XT has a no-frills design that puts function over fashion. The watch has chunky physical buttons protruding from its sides and a rather garish rubber strap. This combination puts it as far from a fashionable wearable, such as the Withings Activité, as is possible It’s available in two colour options, either Midnight Blue/Frost Blue or Black/Grey finishes. At 11.7 mm thick, the Forerunner isn’t the slimmest tracker out there.

Luckily, Garmin has taken advantage of the generous space by cramming the Forerunner 735XT with plenty of useful tech. Inside its chunky main unit you’ll find GPS, an optical heart rate monitor and a 1-inch colour screen.

Those who haven’t known a world without iPhones will be surprised to discover that the screen isn’t touch-enabled. Instead, the watch is controlled via physical buttons, which is in keeping with Garmin’s design rationale of making the unit as tough as possible.

The Forerunner 735XT is one of the most rugged trackers I’ve tested. The watch has a 5 ATM rating, which means it can survive depths of up to 50m. It even survived an accidental collision with one of my dumbbells during a free-weights session. 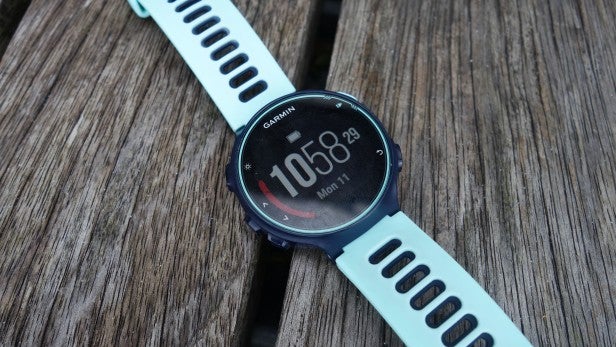 My only minor quibble with the Forerunner 735XT’s functionality is its use of a proprietary charger. I’m not a fan of any device that opts for a proprietary charging cable, since it’s too easy to misplace them or forget to pack them when travelling. Being fair to Garmin, nearly all the trackers I’ve reviewed have custom chargers. Nevertheless, it’s frustrating that the industry hasn’t yet migrated to a standard, such as USB Type-C.

The Forerunner 735XT’s stellar battery life helped to alleviate my annoyance at having to use a proprietary cable. Following a solid three weeks of wear, I found that the Garmin Forerunner 735XT lasted 5-7 days with moderate use. This involved wearing it 24/7, constantly tracking my sleep and steps, plus a 5k run in a park, or 7k session on an exercise bike each morning.

The setup process is easy. Simply download Garmin’s Connect app (available on iOS and Android) and follow a series of on-screen prompts to connect the watch, via Bluetooth, to your phone. 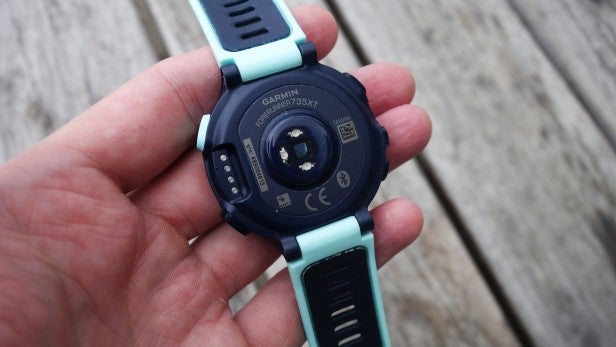 In the past, Forerunner watches have offered superbly accurate exercise and sleep-tracking services. This trend continues with the 735XT, which is one of the most powerful trackers I’ve tested – to the point that it’s complete overkill for anyone but the most committed of athletes.

On my first run with the Forerunner, I was amazed at how reactive the GPS is. Throughout testing, the GPS consistently managed to find its signal more than a minute faster than the Microsoft Band 2 and Basis Peak.

The Forerunner also proved incredibly reliable at distance tracking. On a track I know is roughly 5.2km the results between the Basis Peak and Forerunner were consistent, and at most only 10-20m out of sync. The Band 2 threw up a few anomalies and on occasion was 0.4km out of sync with the other two trackers.

The same proved true with cycling, where I found the built-in heart rate monitor to be one of the best I’ve used. The Garmin watch presented realistic figures time and again, never once indicating that I was in cardiac arrest, or had the heartbeat of a hummingbird – which I experience occasionally on both the Basis and Band 2. 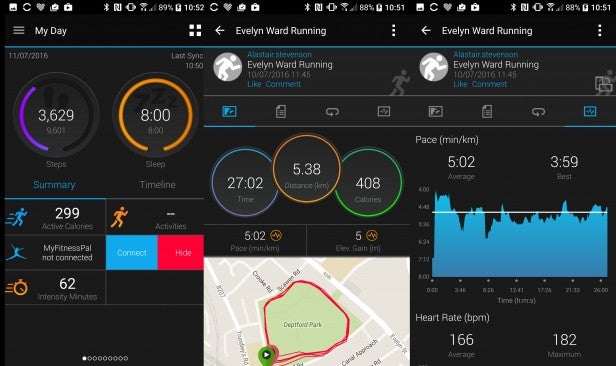 The Forerunner’s multi-sport functionality is also seriously impressive. The Forerunner can be used to track running, swimming and cycling individually. It also has a custom triathlon setting that lets you smoothly transition between the three using a button on the watch’s right-hand side, which means you can concentrate on your time and not the watch. The process works a treat and made it easy for me to track multi-sport exercises without interrupting my flow.

The watch offers access to Garmin’s bespoke app store, too, from where you can add new functionality to the tracker and create bespoke multi-sport workout regimes – handy for people taking part in non-traditional activities, such as Tough Mudder challenges.

Also available is a solid notifications service, which can be set to push alerts for incoming messages from all the services you’d expect, including Gmail, Twitter and Facebook. When paired with your smartphone, the Forerunner 735XT can display weather information and upcoming calendar appointments, too.

Notifications, distance and heart rate tracking is only a fraction of what the Forerunner is capable of. The Forerunner 735XT offers in-depth real-time data and post-exercise performance analytics, which can help you plan and optimise your workout regime.

Unlike cheaper trackers, the Forerunner offers a variety of real-time data throughout your workout. These include your current lap times, duration and heart rate, plus a useful “Training Effect” score. Training Effect is a score out of five that gauges how much you’re getting out of your workout. It’s a popular statistic with serious athletes, who commonly use it to gauge how much each training session will improve their strength and overall fitness. 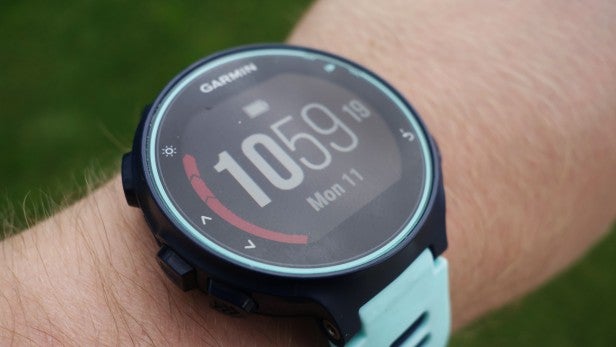 You need the HRM Tri to get a truly accurate Training Effect score and access more advanced data, such as your VO2 max, but even without it I found the metric a useful incentive to really push myself mid-workout.

The Training Effect score could potentially put off those looking for a more casual experience, simply wanting to know how far and how long they’ve run. But if you want a tracker that helps you to monitor your ongoing progress then it’s invaluable. Using the pace tracker and heart rate monitor, I soon found myself racing to beat my previous lap times.

Fans of the Strava app will also be pleased to discover that the Forerunner comes with a free 60-day trial of the service’s premium membership. It will let Forerunner owners with a Strava account check their Live Suffer score. You’ll have to pay for a Strava Premium account once the trial expires if you want to continue using the feature, however. The Suffer score rates your workout based on how hard you push yourself, rather than just focusing on how far you’ve run, cycled or swum, which is genuinely useful.

The Forerunner is also pretty helpful once you’ve completed your workout. Immediately after an exercise the watch will suggest a recommended recovery time and offer feedback on how you performed using a cool “intensity minutes” feature. 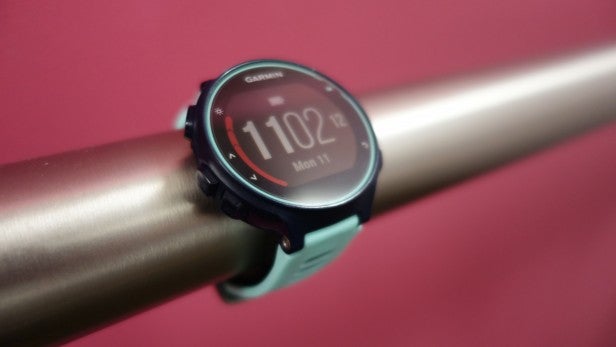 Intensity minutes are the points during a workout when your body is at peak performance. The Forerunner uses your intensity minutes to tailor the activity goals it sets you to meet the recommended stress standards set by big-name health organisations such as the World Health Organisation.

The personal coaching element is a big bonus that adds yet another incentive to not only exercise more, but try harder while doing so – I’m a big fan of it.

I’m less enamoured with the Garmin Connect app. It offers an impressive amount of information, and will provide data on everything from the number of steps you’ve taken, to your stride distance and cadence while exercising. The problem is that all the data is dumped in one of the most obtuse user interfaces I’ve ever experienced.

The main homescreen is fine and offers standard charts chronicling your activities for the day. But if you want to drill down into more specific information about your workout or ongoing progress, you have to navigate through a series of sub-menus that seem to have been put together at random.

Compared to the Basis Peak, Microsoft Health or Fitbit apps, Garmin’s entry feels chaotic and in need of an overhaul. Although, given the depth of data and the wealth of features it contains, this is a small quibble. 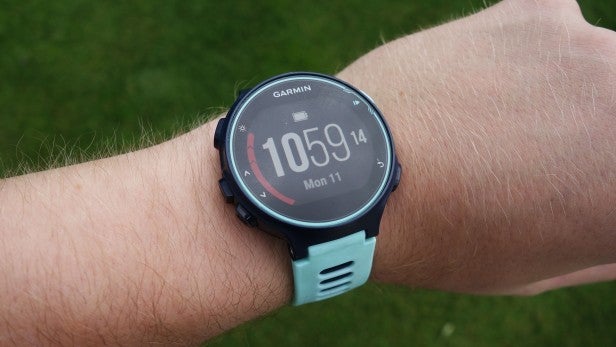 Should I buy the Garmin Forerunner 735XT?

If you’re a regular participant in triathlons, or Tough Mudder-style challenges, the Forerunner 735XT is a great fitness tracker. The Forerunner features a rugged but comfortable design and is jam-packed with all the hardware that a cardio fanatic is likely to need.

For semi-enthusiast runners, cyclers or swimmers, or more casual exercisers, it’s overkill and there are far more cost-effective options available.

Garmin’s own Vivosmart HR+ offers similar, albeit stripped-down, services and costs close to half the price. Casual exercisers looking for basic distance, sleep and step tracking would be better off investing in an even more affordable tracker, such as the Moov Now.

A great tracker for triathletes – but it’s overkill for everyone else.