The Forerunner 210 is one half of Garmin’s duo of new GPS-enabled sport watches – the other being the high-end Garmin Forerunner 410. In contrast to its bigger and more complicated brother, Garmin says the Forerunner 210 is aimed at runners “who simply want to step outside, acquire satellites and start their workout.”


Both watches are well-designed, looking more like regular timepieces than some sport watches. Polar Fitness monitors tend to look like an unimaginative child’s science fiction doodle and the Timex Global Trainer looks like a stop watch awaiting the outcome of an IAAF investigation on banned substances.


The slimmed-down dimensions do not hinder the operation of the watch during training – we found the buttons easy to operate and were relieved that it doesn’t feature the 410’s touch-sensitive bezel, of which we were slightly critical. 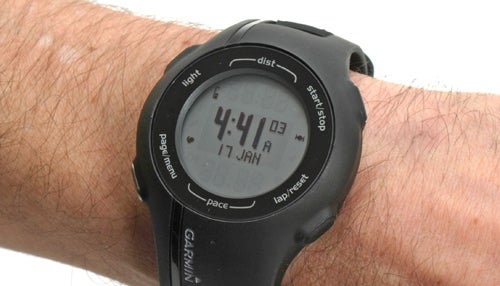 The Forerunner 210 feels secure on the wrist, and has a tooth under the band that keeps the strap in place. Unlike other models in the Forerunner range, the strap is integral to the watch’s structure and is not user-replaceable. This worries us slightly as it means you’re stuck with it if it gets torn or damaged. Garmin told us it had yet to encounter this problem, adding that it would replace any damaged devices within the 12 month warranty period “without question” and owners outside this period would have to pay a flat replacement fee of £78.29. While it’s early days – the product was launched in October 2010 – we felt professionally bound to raise the point with the manufacturer.

Where the Forerunner 410 allows users to display an impressive 35 sets of data across 3 screens of customisable fields on its little LCD, the 210 displays only distance and pace, with either time time lapsed or heart rate in the main field. 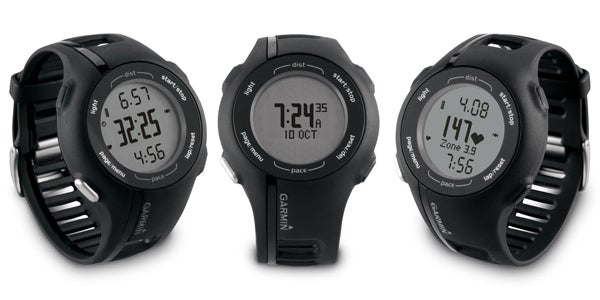 Nor does the 210 does store routes or have the Virtual Partner feature, which lets you pace yourself against a friend’s time on a previous run. These omissions aside, the GPS accuracy of the watch is every bit as good as the more expensive version, locking-on to satellites in less than a minute to quickly provide the runner with reliable feedback on speed, route and mileage.


Runs are stored in the History section of the watch, allowing you to view your training log at a glance without having to sync up with a computer. The layout is clear, and we liked that runs completed today are labeled by default as “Today”, before changing to “Yesterday”, then cycling through named days of the week before being stored with a calendar date. Each saved activity contains lap times so you can review your pace per mile over the course of that particular run.


Runners on a budget will no-doubt already be aware of a number of free GPS tracking smartphone apps that map your route, track your pace and break down workout stats. We found these to be a mixed bag and not as accurate as the Garmin 210. 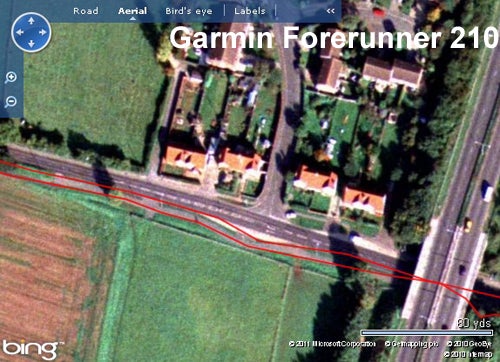 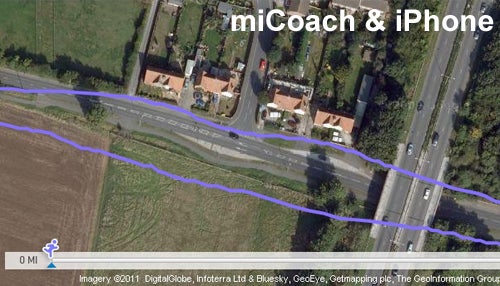 To demonstrate this, we deliberately took a zigzag route along a section of pavement on the course of a longer run. The Forerunner 210 tracked the path very accurately, whereas Adidas’s miCoach for iPhone showed us running through the field alongside the road as we set off, and on completely the wrong side of the road on our return. In addition, a run clocked at 15 miles by the Garmin was notched-up at only 14.85 on the miCoach iPhone app. Not the end of the world, but these things matter to runners.


The watch uses the USB cable to sync with Garmin Connect, where statistics are abundant. This free-to-use service allows runners to view their workout details and share the fruits of their labours across social networking sites or email.


We covered the pros and cons of Garmin Connect in our review of the Garmin Forerunner 410 and concluded that it packs an impressive amount of data, although we encountered an error with the speed on our final mile. 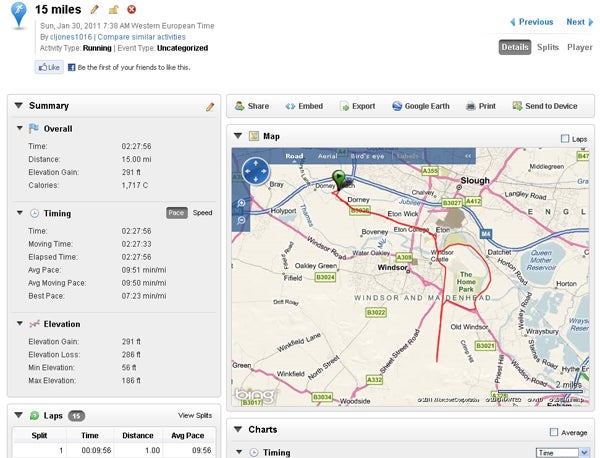 Looking at our fifteen mile run with the Forerunner 210, we found the data to be accurate, and both the timing and route were reported faithfully with no errors

However, unlike the 410, it doesn’t sync with Garmin Connect wirelessly and requires the use of the included USB charging and synchronisation cable that grips around the bezel, reading the contacts on the back of the watch. This is slightly disappointing the watch’s ability to receive data wirelessly from heart rate monitor and optional Foot Pod Support, but it’s not a major gripe. The latter, sold separately, is an accelerometer that measures footfalls so runners can track their distance based on pace when they are running on a treadmill or indoors – where they can’t receive a satellite signal. Cyclists can also use a Cadence Sensor, which measures pedalling strokes per minute to calculate the speed of an indoor trainer. These cost £51 and £35 respectively. 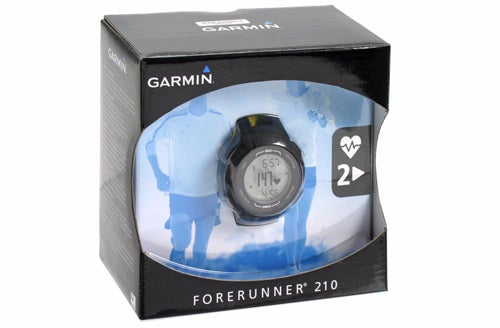 Battery life is excellent at three weeks in standard watch mode (ie: not using GPS tracking) compared to two weeks on the 410, and the lithium-ion cell boasts eight hours’ use in training mode. Since most mortals don’t train for eight hours in one go, we tested it under more realistic conditions. We charged the watch at the weekend, ran 15 miles in 2:27, wore it all week and ran a half marathon (13.1 miles) in 1:59 the following weekend. By the end of the second run, the Forerunner 210 was displaying one out of four bars of battery left.


Unfortunately the watch doesn’t have a more accurate battery meter, so one bar remaining could mean 25 per cent left or only 6 per cent – leaving you to deal with the risk of a run partially untracked, and perhaps more importantly, having no watch. Re-setting the time after a flat battery, however, is easy. Once it is charged, it looks for a satellite signal and adjusts the time in less than a minute. Your stored runs remain saved in the watch.


One annoying thing is that the watch does not tell you when it is fully charged. An hour and a half on the mains left the device with the full four bars, but we would prefer some kind of message to pop-up when the battery is full of juice. Instead, the bars just keep racking up in a hypnotic loop, leaving you to guess what the battery indicator will display when you disconnect the cable and start using the watch.


A word of warning: the 210 is water resistant to a grade of IPX7, meaning it can “withstand accidental immersion in one meter of water for up to 30 minutes.” We have run in the rain and had a post-run soak and with our review sample, which has kept on ticking, but for the money we wouldn’t risk a swim. Triathletes beware, even accidental ones.

The Garmin Forerunner 210 has everything most runners would want from a GPS sport watch, without much of the on-screen customisation appreciated by very demanding runners with more money to spend. For those not enticed by analysis paralysis, this is an impressive device and a valuable training aid for athletes of all abilities.