What is the Garmin DriveLuxe 50LMT-D?

The DriveLuxe 50LMT-D is the flagship 5-inch sat-nav from Garmin. Where the Drive, DriveSmart and DriveAssist build on features as you go up the range, but use basically the same physical design, the DriveLuxe opts for a more stylish chassis. Otherwise, the features are broadly the same as those of the DriveSmart.

The key physical difference between the DriveLuxe and other members of Garmin’s Drive range is the way it mounts in your car. Instead of clipping in and requiring a separate power connection, the DriveLuxe sports a magnetic mount similar to TomTom’s premium models. This integrates the power connection, so once the mount is installed, it just takes a second to connect or detach the device itself. 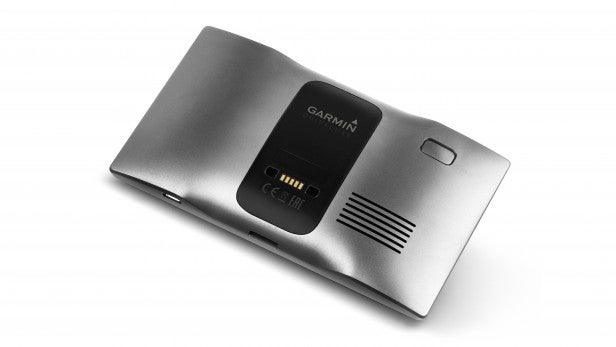 Garmin hasn’t majorly overhauled its menu system for some years, and the DriveLuxe has no innovations in this area. The initial screen shows two large icons that will either take you to the map or the destination submenu. Beneath this is a row of four smaller icons for less frequently used functions such as settings, the built-in apps, and controlling the volume.

Entering a destination within the Where To? submenu takes a keyword-based approach, but you can save a Home destination plus a list of Favourites, or browse your history. You can also browse for points of interest (POI) by category, and there’s a POI database from Foursquare included as well.

A multi-destination trip planner is available on this screen, too, and it’s also possible to add a custom shortcut. This can be a favourite keyword search, a POI category, one of your Favourites, or the ability to search for a junction, town or GPS coordinates. Overall, it’s a comprehensive and flexible menu, which provides all the main means of finding a destination. 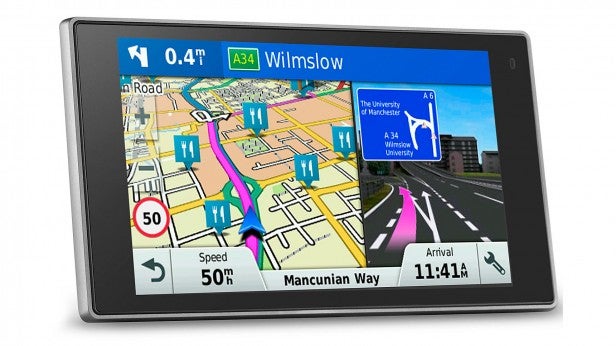 The DriveLuxe also incorporates Garmin’s capable verbal control system. Simply say “Voice Command” and you’re led through programming a destination by speaking. You can search by address, postcode, Point of Interest, Favourites and History. It’s an effective system, albeit not infallible, and much safer than trying to push buttons while driving.

The DriveLuxe version I tested came with maps of European countries, including Eastern Europe and Turkey, but not Russia, and there doesn’t appear to be a version with just UK and Ireland anyway. You probably wouldn’t buy a premium model like this just with one country. The maps come with a lifetime subscription to updates, which is virtually the norm these days.

The map view is another area that hasn’t changed hugely for some years in Garmin sat-navs. The route is shown clearly, with POI icons popping up along the route, which you can click on and reroute towards. The next turning is shown clearly in the strip at the top, including the name of the road you will be turning into, the distance to the turning, and the direction.

Safety camera information slides across in the bar at the top too, as well as warnings of potentially dangerous road features such as sharp bends. Your speed is shown at the bottom, turning red if you’re over the limit. The name of the current road you’re on sits at the centre, with your estimated arrival time on the right. 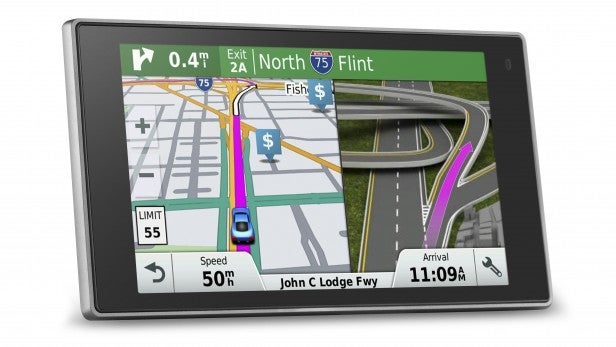 The bar on the right side shows any traffic along the route, courtesy of Garmin’s Digital Traffic delivered via DAB. This is supplied by INRIX in the UK, and other vendors elsewhere around Europe. The data on the right-hand side of the screen gives you an indication of how close you are to the incident and how long it’s likely to delay you, plus the option to try another route.

The system is reasonably effective, picking up all the traffic I encountered during testing. In my experience, Garmin’s Digital Traffic doesn’t quite achieve the detail of TomTom’s Traffic, but it picks up the main issues so you can avoid spending a lifetime trapped on the M25 or wherever. The subscription for Digital Traffic is for the lifetime of the device, too, across the whole of Europe.

The 5-inch screen provides a decent 800 x 480 pixels and is clear in most lighting conditions, automatically switching to dark colours at sunset. This is a capacitive screen, so it’s pretty responsive to your fingers. However, the bars top and bottom plus traffic on the right reduce the active map area quite a bit, making the view a little cramped.

On the plus side, the spoken commands are very detailed and descriptive, telling you which lanes to be in, for example. Garmin seems to have the edge slightly over TomTom in this particular area. With the Voice Command system, this is a sat-nav you don’t need to look at or touch very often if you don’t want to. 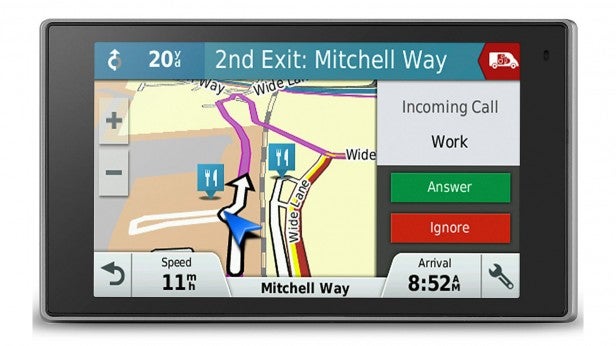 The DriveLuxe integrates all the “Smart” features of the lesser models in the range. It can warn you of driving fatigue at a regular interval, lets you know actively about changes in the speed limit along the current road, and also notifies you when you’re approaching a school zone and should take extra care.

You can also hook up the DriveLuxe to your smartphone via Bluetooth to use it as a hands-free device. If you install the Smartphone Link app onto your iOS or Android phone, you can receive weather updates on the DriveLuxe, and send a destination to the sat-nav from your contacts list. You can also subscribe to optional extra services such as Dynamic Parking (which includes pricing and space availability), or photoLive Traffic Cameras (which shows you what the road surveillance cameras can see, in real time).

Should I buy the Garmin DriveLuxe 50LMT-D?

The Garmin DriveLuxe 50LMT-D goes head-to-head with TomTom’s recently announced GO 5200. At £50 cheaper (at the time of writing), the Garmin offers better value, although it’s still not exactly a bargain. The traffic provision isn’t quite so effective as TomTom’s, but it will still help you avoid the main jams that could make your daily commute a misery. With a plethora of useful features and an attractive design, this is a very tempting premium sat-nav.

The Garmin DriveLuxe 50LMT-D is a feature-rich and attractively designed premium sat-nav.