What is the Garmin Dash Cam 35?

The Dash Cam 35 is the new flagship dashboard camera from Garmin. This is a market that’s becoming increasingly crowded of late, but with a Garmin device you’re at least getting a brand that has a lengthy history of products aimed at easing automotive journeys. So what does the Dash Cam 35 bring that less well known brands miss?

The video resolution options on the Dash Cam 35 aren’t particularly ground-breaking. The highest resolution available is 1080p Full HD, which is recorded at 30fps, with a fairly modest 8Mbits/sec data rate; the RAC 05 GPS has already gone beyond both that resolution and data rate. Footage is recorded to a MicroSD card, with a 4GB unit included in the box, although media up to 64GB is supported. The supplied media is enough to capture a little over an hour of footage.

You might not need a larger MicroSD card, because once the storage is full, the Dash Cam 35 will begin to loop, erasing the oldest video files and recording new ones instead. Files can be marked to be saved, so that they’re not erased in the looping process, and if the G-sensor detects an incident then those files will end up in another folder where they’re not deleted either. 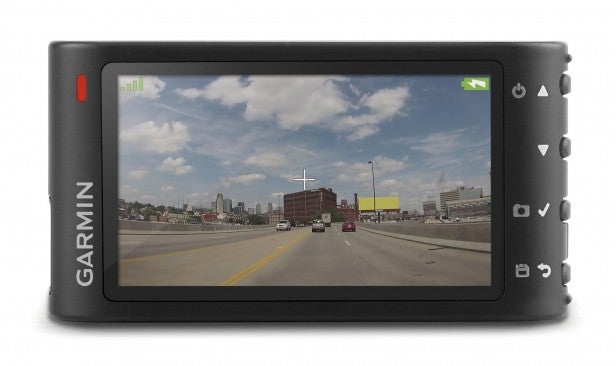 The Dash Cam 35 is released alongside the 30, with the primary difference being that the 35 is larger and sports a three-inch screen. The 35 is still quite small and light, though, at 112.7g. Nevertheless, construction is reassuringly solid, as I’ve come to expect from Garmin devices. However, the size hasn’t left much room for a battery, and there’s only enough juice for 30 minutes away from the power cable – although most dashboard cameras I’ve tested have similar limitations.

As with other recent dashboard cameras I’ve looked at, the Dash Cam 35’s safety features extend beyond merely recording your journey so any incidents are documented visually, albeit not that far beyond. Also available are safety-camera location notification and collision detection, which Garmin calls “Driver Awareness Warnings”.

The red light and speed camera warnings rely on the well respected Cyclops database, but only a trial version is included. If you want regular updates, you’ll need to purchase a subscription. UK coverage costs £16.99 a year, or £24.99 for the whole of Europe. You can also purchase a one-time download of the whole of Europe for £12.99, but this doesn’t provide any further updates after the initial set of files. 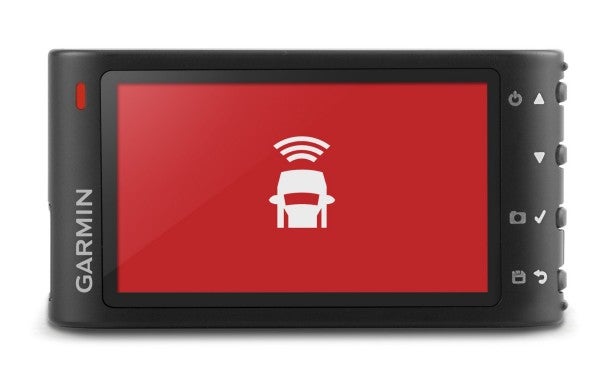 The forward-collision warnings use the camera to sense how close you are to the vehicle in front, notifying you if the distance is too little for your current speed. This then pops up a warning. Well, in theory it does. I didn’t manage to get it to trigger during testing, although I was careful to test this feature too much on public roads in case I provoked a road rage incident from another driver.

However, Garmin hasn’t included the plethora of warnings that some competitors are now offering. In my testing, these are a little flaky – such as lane-departure warnings – and aren’t therefore features I’d want to rely on. They could be more of a distraction than a help, and I’d rather that these were built in and fully tested for my vehicle. But if you do want them, the SnooperDVR-4HD offers them in spades.

In terms of installation, Garmin has moved away from the usual suction mount and used a circular adhesive patch instead. As a result, this device won’t be so easily swapped between cars as some, although a second adhesive patch is included in the box. I’m also not convinced you should leave any device in your car unattended, so making removal less user-friendly earns the Dash Cam 35 a black mark.

As with other dashboard cameras, a long cable is included so you can route power around your windscreen. Garmin has failed to supply something with which you can secure this cable around your windscreen, however. The power cable also ends in a captured car adapter, so if you want to run the camera alongside a sat-nav, you’ll need two car power sockets or a dual adapter.

Garmin has aimed to make operating the Dash Cam 35 as seamless as possible. As soon as it detects external power, it will begin recording video. I couldn’t actually find a way of turning video recording off, without turning off the device. There are four buttons on the right-hand edge of the device for controlling the on-screen menu. I found these needed quite a firm press to operate, too.

The top button turns power on and off, but a shorter press will call up the settings. The menu is then navigated using the two top buttons, with the third one selecting an entry and the fourth going back a menu level. There aren’t that many settings to configure, however, so there’s a good chance you won’t be accessing these very often anyway.

The Dash Cam 35 is essentially a plug-in-and-forget kind of device. But video quality is somewhere in the middle of the pack. I’ve seen better resolution from the RAC 05 GPS, although others exhibit less detail in their images. Otherwise, the picture quality is decent, and performance is good enough in low light (say, a night road with streetlights) to make out number plates.

The Dash Cam 35 has a built-in GPS receiver, so although it isn’t a sat-nav, it does record the coordinates of your current position, which are stored alongside the video files. Although it’s possible to watch the recorded videos directly from the memory card, you can access this location information via Garmin’s Dash Cam Player software, a free download from Garmin’s website. I found this much more stable and seamless than some other dashboard camera software I’ve tested recently. 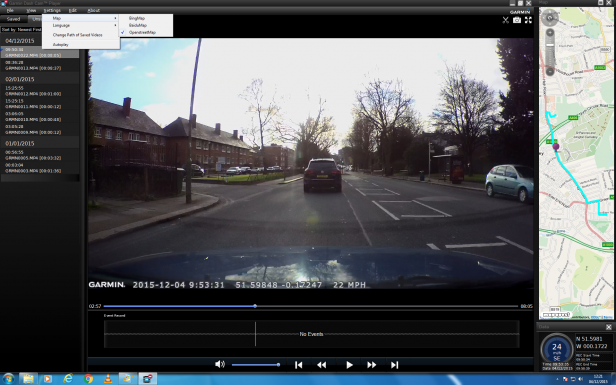 The software detects the files on the Dash Cam 35 once it’s hooked up via USB, and then is able to play these directly, with embedded date, time, GPS coordinates and current speed onscreen. It’s also possible to call up a BingMap, BaiduMap or OpenStreetMap to show the journey for the video file and whereabouts the current video play-head position represents along that journey.

Should I buy the Garmin Dash Cam 35?

The Garmin Dash Cam 35 doesn’t try to impress you with heaps of features that might be more of a distraction than a help. Video quality isn’t on a par with the RAC 05 GPS either, so it isn’t quite so easy to pick out number plates and other details from potential offenders. I’m not convinced by the mounting strategy either.

However, this is also a product that just works, which is what you want from this kind of device, making it worthy of  consideration. The Dash Cam 35 does live up to the Garmin brand quality.

The Garmin Dash Cam 35 may not be brimming with extra features, but it provides solid, reliable dashboard camera performance.