What is the Garmin babyCam?

The babyCam is an in-car camera designed to allow you to see someone sitting in the rear of your vehicle via the screen on your satnav. As the name suggests, this is primarily for those who have a baby strapped into the back seat of a car, who may even be facing backwards.

With the babyCam you can grab a peek at your little occupant with a press of a button, for reassurance, or if you’re worried that something might be wrong. Normally, you’d either have to pull over for a quick check, or crane your neck round, which means you wouldn’t be paying attention to the road ahead.

The babyCam itself is a relatively small, tubular device that’s mostly made up of its battery compartment. This takes a pair of AA batteries, although there’s also a mini-USB connection on the rear that can be used for power. The mount included is designed to attach to the metal rods of an extending head rest, so if your car doesn’t have such a fixing then you may struggle to find a suitable position to place the camera. 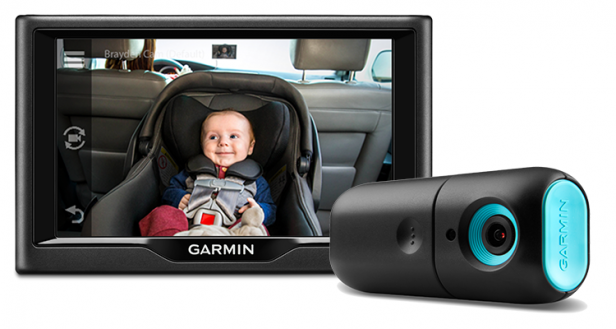 It will be no surprise to hear that in order to use the Garmin babyCam, you need a Garmin satnav as well. There are a number of compatible devices, too many to list here, so if you’re an existing Garmin owner then be sure to check the appropriate web page to see if yours will work. The range appears to span back to around late 2014.

Whichever satnav you have, the babyCam comes with a replacement car power cable that you use instead of your existing one. This includes a wireless receiver for the babyCam, but also an antenna for RDS-TMC traffic updates. So if your satnav already has traffic service via the FM radio signal, you won’t lose this when using the babyCam.

However, it doesn’t appear to enable the service on satnavs that support traffic, but which don’t have this included as standard – such as the nüvi 2519LM that I was sent for this review.

Once the babyCam is installed and the satnav plugged into your car power via the new cable, the two must be paired. There should be a menu option on the satnav for the babyCam under Settings  – as well as one for the Backup Camera range that Garmin also sells. Up to four cameras of either type can be paired.

This is a little more complicated than the documentation implies. I found that you have to put the satnav into pairing mode, then take the batteries out and put them back into the babyCam to cycle the power, so that it goes into pairing mode. Following this, the process is automatic, and you don’t need to enter a passcode – as with Bluetooth pairing – although you can give each camera a memorable name. 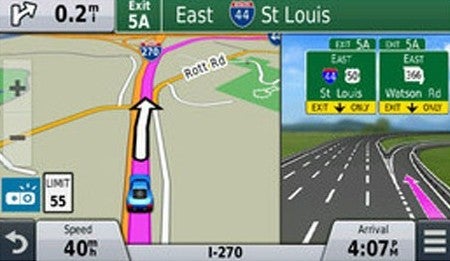 Once the satnav and babyCam have been paired, an icon appears onscreen for the camera. Slightly confusingly, on the menu screen it’s on the top right, but when navigating it’s towards the bottom left of the screen. It’s fairly large and obvious, however, so you’re unlikely to miss where it is. Simply touch this icon to call up a view from the babyCam.

The video is transmitted at 640 x 480 resolution and 30 frames per second. This is enough to see if little George is smiling or frowning, awake or asleep, but you probably won’t be able to pick out the algebraic expressions he has been writing on the notepad you gave him. Nevertheless, assuming your baby isn’t a child genius, the resolution will be fine for a quick check that everything is okay.

Once the video has been on-screen for a short while, it will automatically disappear again. You can set the duration to be 10, 20 or 30 seconds. This prevents you spending too long gazing at your loved one and not the road, although it probably still isn’t a good idea to be distracted by a screen for 30 seconds when driving. The automatic disappearance also means you won’t have to touch the screen again to return to the navigation map.

Low video resolution notwithstanding, I found the babyCam coped reasonably well in variable light conditions. You don’t need to worry when driving at night, either, because the babyCam offers a Night Mode too. This switches the camera into the infrared range, where it can pick up an image in almost complete darkness. This has the added benefit of not needing you to turn on the internal lights, which might disturb your sleeping beauty. 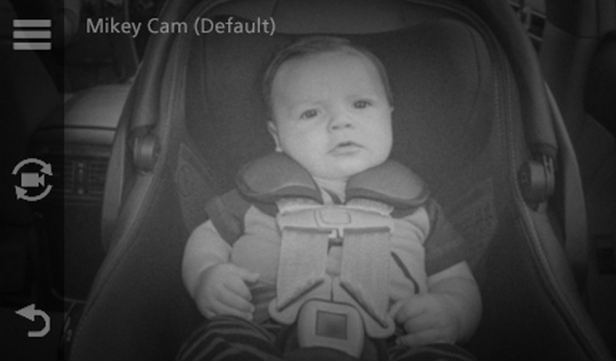 Although the babyCam is primarily intended to be battery powered, because routing power to your seat head rest could be a huge pain, Garmin claims a pair of AA batteries should last a couple of months of daily use. This is because the device spends most of its time in a low power mode, and boots up only when you request a look at the video. It powers down again when the feed disappears from the satnav screen.

As a final piece of assistance, when power is removed from the satnav, a pop-up message will remind you to check for passengers. Since there’s no power to the camera receiver cable at this point, you won’t be able to call up a view from the babyCam. But with a few real cases of people forgetting their children in their cars – with occasionally severe consequences – this is another reassuring feature. 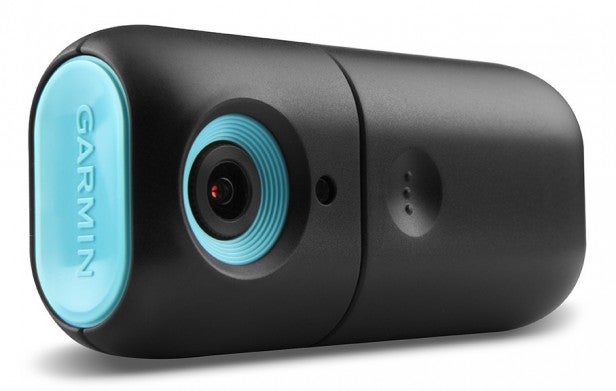 Should I buy the Garmin babyCam?

The Garmin babyCam does what it sets out to do, and integrates well with compatible satnavs. At around £130 it’s a little pricey for a device with only a single, very narrow usage. I’m also a little concerned that you’re supposed to leave this in your car at all times – it’s a little fiddly to take in and out – since it’s never a good idea to leave anything of value in an unattended vehicle.

Nevertheless, if you’re a Garmin satnav user (or don’t mind becoming one), drive a lot, and have a small child you want to keep an eye on when in the car, the babyCam will let you do so without having to crane your head around dangerously. So worried car-driving parents could gain a little peace of mind, for the princely sum of £130; satnav not included.

The Garmin babyCam lets you keep an eye on your kids in the back of the car, but since it works with only Garmin satnavs, it will appeal to only a select audience.