Smartphone and tablet gaming has achieved a huge level of adoption among owners of these devices in recent years, with people as young as five and as old as 80 easily getting to grips with the likes of Angry Birds and Fruit Ninja. Using a touchscreen for these types of games makes so much more sense than using physical controls – it is intuitive and means you don’t have to remember which button does what.

Of course, for some games and for some people, nothing will replace the need for physical controls and with only the Sony Ericsson Xperia Play so far offering inbuilt gaming controls, fans of old-school button bashing need to turn to third party add-ons, such as Fructel’s Gametel Bluetooth controller.

The Gametel is certainly not the first Bluetooth gamepad to come to market, with the iControlPad offering Android and jailbroken iPhone users physical controls since the middle of last year. Fructel’s offering, however, works with Android smartphones and tablets as well as the iPhone and iPad without the need to jailbreak your Apple devices, but can it offer the perfect combination of touchscreen and physical controls? Let’s find out. 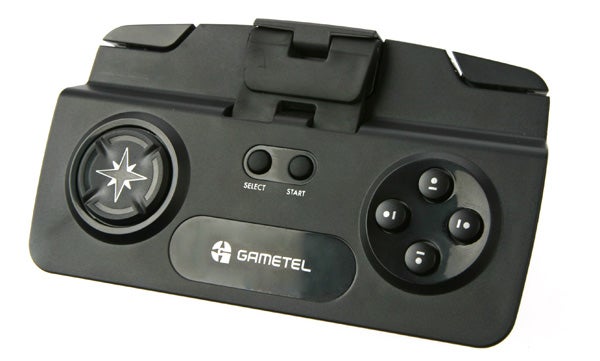 The Gametel looks similar to the iControlPad, its physical buttons accompanied by a spring-loaded clamp on the top of the device to allow you to secure a range of smartphones. Carrying the Gametel around won’t put too much strain on you either as the lightweight controller weighs just 81g and measures 116 x 65 x 15mm.

It is constructed for the most part of matt black plastic, with some glossy black flourishes around the buttons. While the device feels nice in the hand, a lack of weight and rather flimsy feel mean it doesn’t feel as premium as its £50 price tag suggests.

The buttons are laid out in typical controller fashion, with a four-way control-pad on the left, Select and Start buttons in the middle, and four action buttons on the right. These are complemented by two shoulder buttons on the rear. Unlike the Xperia Play and iControlPad however, there are no analogue pads to join these buttons, which could be a limiting factor in controlling some games.

We initially thought that the D-pad, with a strange compass-like logo in the middle, was an eight-way one, but unfortunately not. It’s 4-way only. The button itself feels relatively OK, with a nice solid action, but the up/down/left/right positions are not defined enough for our liking.

The action buttons don’t feel as solid, but in our testing worked well with no noticeable lag on screen. The best of the lot, however, are the shoulder buttons, which feel superb and offer just the right action, producing a distinct click when pressed.

On the bottom of the device you’ll find the microUSB port, which charges the 250mAh Lithium-ion polymer battery. The battery promises nine hours of game play on a full charge, and this was borne out in our testing. Unfortunately, unlike the iControlPad, you won’t be able to use some of the spare juice from the Gametel to give your dying smartphone the kiss of life. Alongside this port, you’ll find a red charge indicator LED and a green one which lights up when the Gametel is in use.

Mechanisms like the spring-loaded clamp are things that could easily be end up a complete fail in a device like this. However, Fructel has managed to make it feel solid and, with rubber flaps on either end, will hold your smartphone in place firmly and protect it from scratches. 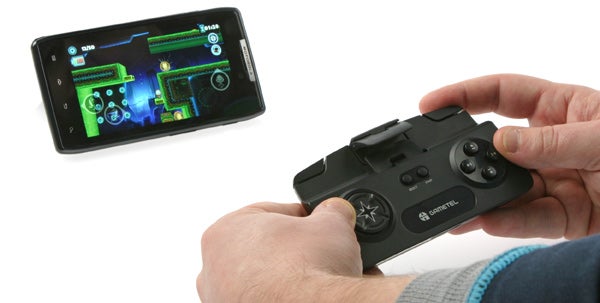 The clamp extends far enough (72mm) for you to fit in pretty much all current smartphones, like the Samsung Galaxy S II and Motorola Razr but  the monstrous Samsung Galaxy Note, which is pretty much the largest smartphone on the market at the moment. Fitting your phone is reasonably easy but at times the bottom flap doesn’t pop out and getting the phone in position can be a bit fiddly, as the clamp is constantly trying to retract.

Another thing to note is that on certain phones, the rubber flap at the top will sit on the volume buttons for the smartphone, and can volume level changes at random times. This can usually be solved by flipping the phone around, but some games don’t support this, making it quite annoying.

Of course the Gametel works over Bluetooth, and you don’t have to use the clamp. This means tablets – and by extension TVs – can happily be controlled by the Gametel. The plethora of Android tablets, as well as the iPad, can be used once they are in range of the controller.

Connecting your device via Bluetooth is slightly different depending on whether you’re using iOS or Android. For iOS, it’s a relatively straight-forward process – as long as you’re running iOS 4.0 or higher for iPhone or iOS 3.2 for iPad. Pressing the start button and left-hand action button together will force the Gametel to enter ‘iCADE’ mode. Then go to the Bluetooth menu on your iOS device, choose the Gametel when it appears and you’re done.

There is a Gametel app in the App Store but it’s not necessary to download it to get the gamepad working. However, it does offer you a list of compatible games and links to them in the App Store.

We had no problems connecting over iOS and once you are connected, to switch between the on-screen keyboard and the Gametel was simply a matter of pressing start and select together. In order to get the Gametel to work with certain games, such as No Gravity, you will need to go into the game menu and enable the arcade input mode. While this isn’t a major problem, it can be annoying having to do it every time you begin a new game.

Turning to Android, this time you will need to download the Gametel app from the Android Market and install it. Switching on your Gametel, you’ll need to enter Android Mode by pressing the start and top action button together for three seconds. Once you open the app it will ask you to enable the Gametel as the input method. And once this is done, you’re all set.

In Android, unlike iOS, you can add up to four Gametel devices to one smartphone/tablet through the app. We were unable to test out this aspect as we only had one test unit in the office, but setup seems fairly painless, though how many times you would use two or more Gametels on one smartphone or tablet is debatable.

One issue we did have with the Android set-up was that we were unable to switch quickly between the on-screen keyboard and the Gametel as we were able to do in iOS. This led to a lot of pointless and frustrating navigating of Android menus and something which took some joy away from the experience. 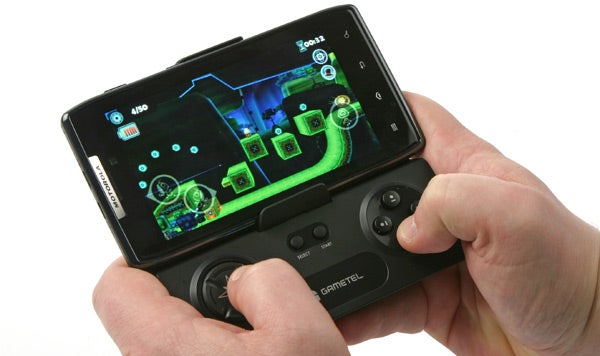 Because the Gametel uses Bluetooth, you don’t need to be within touching distance of the tablet or phone. The need for the controller to work anything past a few metres becomes a moot point as you would be unable to see the screen anyway. However, as you could hook up your phone or tablet to a big screen TV (via HDMI), you would need the controller to work from some distance. In our test the controller worked up to ten metres away from the device which should be enough for any situation.

Of course, no matter how great the controller is, if there aren’t any decent games you can play with it then, there is not much point to it really. And unfortunately, this is the where the Gametel fails most profoundly.

Looking first at iOS, the Gametel supports hundreds of Atari iCADE games including such ‘classics’ as Missile Commander, Asteroids, Centipede, Pong, Super Breakout, Lunar Lander and Warlords, which are all pretty old and ropey, but if that’s the type of gaming you’re into then there are enough of them to keep you entertained. 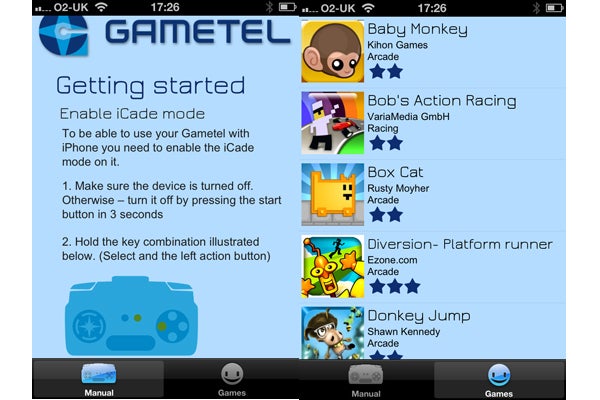 Alongside these retro titles, the Gametel supports some other games (28 at the time of publishing) that you’ll find listed on the Gametel app for iOS or on its website. These range from basic games like Frogger to more ambitious titles like EnbornX.

Android devices fair little better, with 50 or so titles available in the Market. These again range in quality from the old school Radiant Lite and R-Type games to 3D racing titles like Reckless Racing and Asphalt 5 HD. While the Gametel works well with these games, there is simply not enough support for most people to justify spending £50 on the Gametel.

Until widespread support for peripherals such as these becomes a reality, controllers like the Gametel will have a limited appeal due to a lack of support for mainstream games on all platforms. Fructel representatives told us the update to Android 4.0 should open up the Bluetooth API and should ensure that all games will be able to be played using physical controls, and all developers will need to do is add a line of code to the game for this to work. It sounds promising, but we wait to be convinced at this point.

The Gametel’s ease of use, cross platform support and solid build should make this Bluetooth controller a must-buy for mobile gamers. However, its high price and the short list of games that support this controller mean that it will only really appeal to a niche audience of people who can’t do without physical controls for mobile gaming.