What is the Gaggia Naviglio Deluxe?

The Gaggia Naviglio Deluxe is a coffee machine for those wanting a bean-to-cup espresso, but who don’t want to pay through the nose for it. Although the £399 entry price may appear expensive, it’s one of the cheaper bean-to-cup machines currently available.

It may not have the jaw-dropping features to distinguish it from the likes of De’Longhi, for example, but it’s a solid choice for those who don’t like the idea of a manual espresso machine. 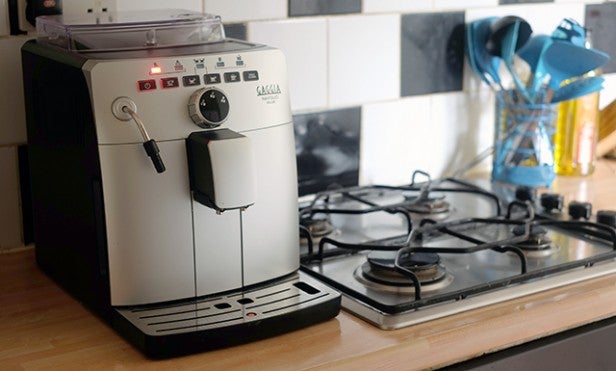 The Gaggia Naviglio Deluxe appears to be a new machine, but it’s largely a rebrand of a Philips Saeco HD8750 from 2014. I’d advise against jumping in with both feet just because you like the Gaggia brand.

The Gaggia Naviglio Deluxe comes across as a little more basic than the majority of bean-to-cup machines. There’s no display, just a series of buttons and knobs. So once you’ve fine-tuned a few settings to your liking, making a cup of coffee is simply a matter of pressing a button. Bliss. 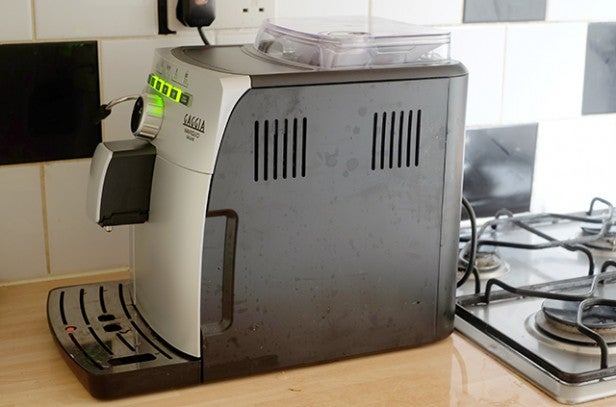 Given the Gaggia Naviglio Deluxe’s front looks fairly neat, I see no major downside to the lack of a screen.

A rather more serious consideration is how “bean-to-cup” the Gaggia Naviglio Deluxe truly is. The basic models simply turns the beans into a cup if the hot stuff – the milk preparation has to be done manually, but it’s not difficult. However, on the Deluxe version there’s a little steam spout attachment that draws milk from a separate pot.

It’s a far less involved system than that on some coffee machins, and a little tacked-on. However, the difference in price between the two models is relatively small too (as little as £20).

While the shape of the Gaggia Naviglio Deluxe is fairly tower-like, this height means that much componentry is crammed into a relatively small footprint. It’s big, but doesn’t demand a huge amount of worktop space. 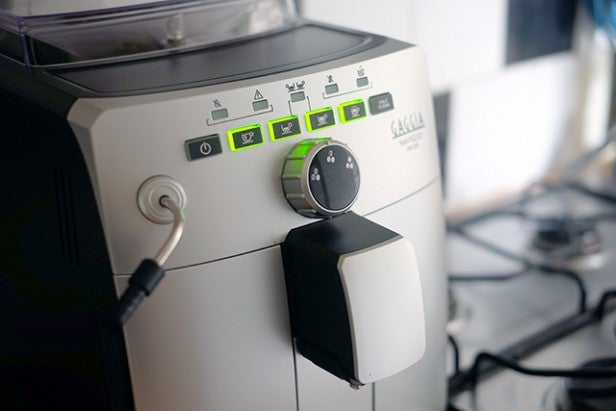 How is the Gaggia Naviglio Deluxe to use?

The part I appreciate most about the Gaggia Naviglio Deluxe is the sheer convenience it offers. Its 1.5L reservoir is large and front-loaded. It’s the silvery part that sits to the left of the spouts. Just pull it out and re-fill. Demonstrating smart design symmetry, the part to the right of the spout is the container for discarded grounds. They’re excreted as little pucks. Clean and compact – simply pull out this right drawer every now and then to fling its contents into the bin.

Following months of fiddling around with machines with rear reservoirs, chosen for reasons of aesthetics, it’s refreshing to return to a more sensible front-loading unit. 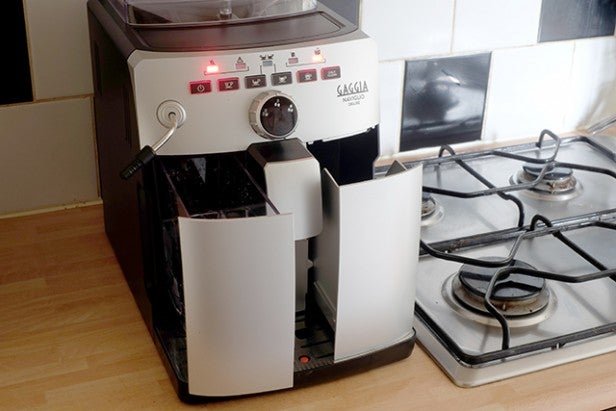 The drip tray, too, doesn’t rile; it runs the whole length of the Gaggia Naviglio Deluxe. I’ve used the machine for days before it’s needed emptying, with the added bonus that actually helps to add a bit of stabilising weight to the machine. Not that it’s worrying light when empty, though.

Further low maintenance comes in the form of the Gaggia Naviglio Deluxe giving itself a quick rinse out on power-up and power-down, and automatically switching itself to standby mode after about 25 minutes left idle. There’s also a button on the front to make the machine perform a more thorough clean. 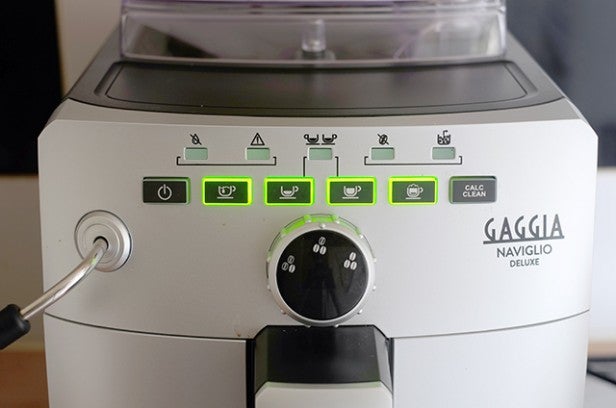 What the Gaggia Naviglio Deluxe doesn’t offer is any fine tuning when it comes to the composition of the coffee it outputs. There’s a dial on the front that lets you choose how much coffee is used, but there’s no control over the temperature of the brew.

There are really only two coffee presets. One gets you an espresso; the other a long coffee. The other buttons on the Gaggia Naviglio Deluxe alter the output to steam and  hot water, both of which are expelled via the movable wand on the left. The lack of precise control is made up for somewhat by the Naviglio Deluxe’s ability to make tea and hot chocolate too. Note, too, that the coffee spouts are high enough to accommodate all but the largest mugs. 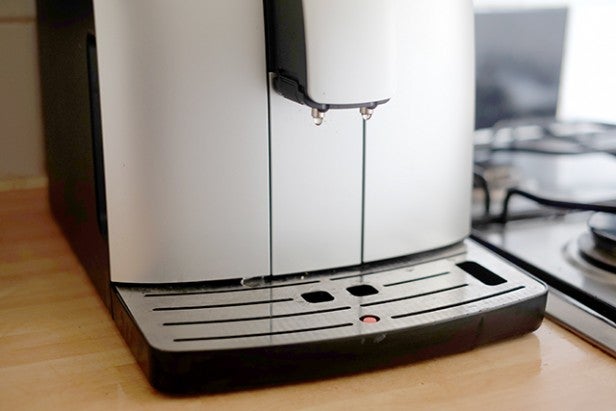 There’s decent control of the grinder setting, although since it’s adjusted in the beans compartment using a tool, it isn’t something you’re meant totweak every time you try out a new blend.

The Gaggia Naviglio Deluxe covers the basics without too much ceremony, and the simple interface is great for those who hate the idea of a flashy menu system that feels like a miniature computer. 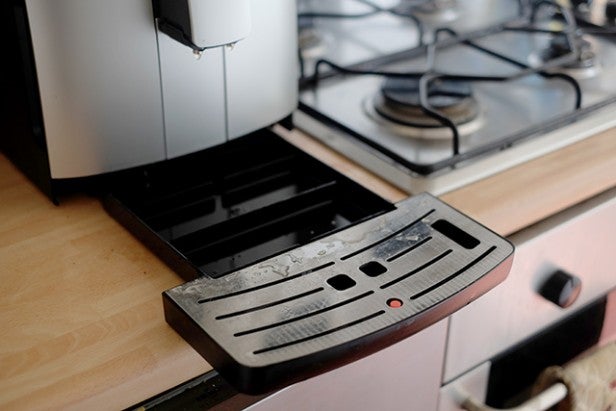 There are benefits to be had with more control, though. For example, I find that the Gaggia Naviglio Deluxe’s long coffee setting isn’t quite long enough, meaning I have to often  top up my Americano with hot water. And since this machine has a single boiler, rather than separate units for the steam and coffee outlets, there’s a slight wait between coffee and water output.

It’s not too grating, however, and when the Naviglio Deluxe gets started, the feed of both water and steam is fast and steady.

When delivering a single hit of espresso (a double-shot measure), the Gaggia Naviglio Deluxe’s output is a little timid compared with what you might get out of a full-on manual espresso machine. However, for those who like their coffee strong, a double-press of either the long coffee or espresso buttons delivers two hits in sequence. Watch out, though: max out the coffee dose dial and you can really give yourself a pretty severe buzz. 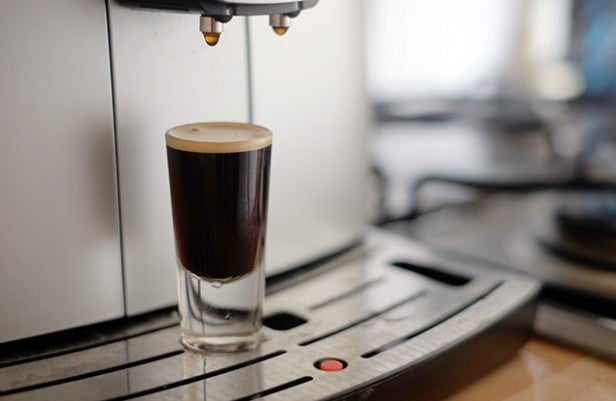 This is all a question of taste, of course. Stepping away from personal preference, though, the Gaggia Naviglio Deluxe’s coffee is solid. You get a consistent, dark crema. The feed is consistent enough to avoid drips ruining it, even though the coffee spouts are higher up than those on other machines. 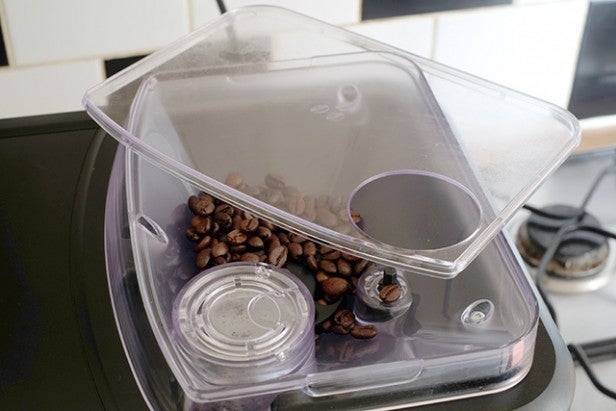 The secret to getting the most out of the Gaggia Naviglio Deluxe is really working with the dosing dial and the single or dual-brewing options. If you’re a fan of a stronger brew then a little tweaking will be required – but you can certainly get there.

The only remaining question is: to Deluxe or not? These two models  appear to be much the same aside from the milk frother accessory, designed to stop you from scalding your milk. However, unless you find a good deal for the Deluxe version, I’d suggest schooling-up on YouTube and doing the job yourself. The Deluxe model doesn’t get you one-button lattes, and the milk frother attachment is pretty much the lone fiddly part of this machine. 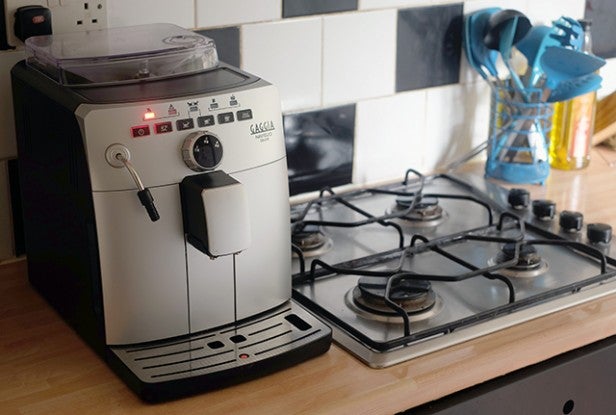 Should I buy the Gaggia Naviglio Deluxe?

The best thing about the Gaggia Naviglio Deluxe is how convenient it is. Virtually every part of the unit has been designed to avoid causing annoyance. From the high-capacity, easy-to-empty/fill reservoirs to the refuse bin and generously sized drip tray. Operating this machine is simple and straightforward.

I did find that to produce a good strong Americano, similar to what you might get in a high-street coffee shop, you need to apply a few tweaks. But it’s otherwise delightfully simple, offering an alternate take on the bean-to-cup espresso machine where drinks are customised with a screen rather than a dedicated button press.

The Gaggia Naviglio Deluxe’s main problem is that there are currently very good deals available for machines such as the De’Longhi Magnifica ESAM4200, which offers similar features and finer control for less money.

A simple and wonderfully convenient bean-to-cup coffee machine for those who don’t want the effort involved with a traditional, manual model.