I admire what FX Tec has done with the Pro 1. And while it’s not necessarily a device I can see selling a huge amount of units, it’s great to see something a bit different.

If you’re bored with the majority of phones all being black slabs of metal and glass and long for the days when Blackberry’s ruled the smartphone world, then the FX Tec Pro 1 might very well be for you.

London startup FX Tec might have only been founded in 2018, but it’s already gearing to launch its first flagship phone – and it’s a rather interesting device.

The Pro 1 is an Android phone with a full, physical horizontal QWERTY keyboard hidden beneath the 5.99-inch OLED display.

Instead of the vertical physical keyboard, the kind of which Blackberry once made its name for, the Pro 1 uses a horizontal pad, very much like the Psion organisers of the 80s and 90s.

Push up firmly on the display and the 66 key backlit keyboard will appear with the screen sitting at a comfortable 155-degree angle – almost like a mini laptop. The device makes quite the opening impression simply by being so different from anything out there. 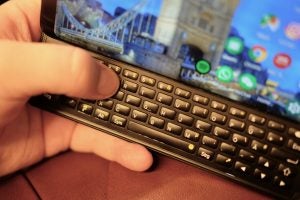 The keys are as spacious as you could expect for fairly small phone and there’s a nice ‘clack’ when you press down – it’s satisfying, even if I’m a lot slower typing on physical keys rather than on a screen.

As the keyboard is used horizontally, you need to hold the phone with two hands to type, which isn’t ideal if you’re trying to knock out an email on the move, and it feels much better if you’re sitting down. The good thing about physical keyboard-toting Blackberry devices was that you could type a message with one hand.

The keys also double as quick shortcut keys and each of these is user-configurable. A long-press on the W key, for instance, could take you to WhatsApp or F to Facebook. Some apps will even let you use PC shortcuts, like CTRL + C in Google Docs.

Even with the physical keyboard and all the moving parts that it involves, the FX Tech Pro 1 feels well built and sturdy. Apparently, the mechanism is good for over 100,000 uses. I can see dirt and debris getting inside though, and there’s a very thin cable that’s visible when it’s open that looks a bit delicate.

With the keyboard stowed away the phone feels less interesting. It’s thick – hardly surprising – with a matte plastic body and a slightly curved 18:9 display on the front. It’s a nice enough FHD+ OLED panel with vivid colours and enough detail. Actually, pop open the keyboard and you’ve got a handy stand for propping the phone up and watching films on a train. 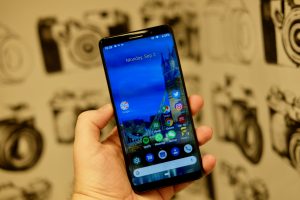 With the keyboard put away

Around the side you’ve got a flush fingerprint scanner, dedicated camera shutter key, 3.5mm headphone jack and a USB-C port for charging. It’s nice that FX Tec has used this extra space afforded by the design to include as many ports as possible.

Powering the phone is a Snapdragon 835, 6GB RAM and 128GB (expandable via microSD). Hardly the power you’d expect from a £649 in 2019, but enough to get the job done. There’s a 3200mAh battery inside too, and I was assured this would hold 2 days worth of juice.

The unit I was using was running an unfinished version of the firmware which affected the camera, so I’ll save my thoughts on the optics for our full review. But specs-wise you’re looking at a main 12-megapixel Sony IMX363 sensor with an f/1.8 aperture paired with a 5MP depth sensor. There’s an 8-megapixel camera on the front, too. 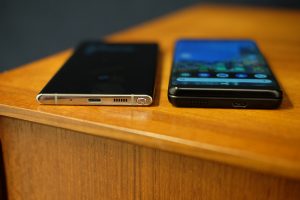 FX Tec has done very little with the software here, instead sticking to a very clean version of Android 9 Pie (with Android 10 coming later). This is far from a bad thing. It’s tweaked to allow the home screen to display in landscape, and that’s about it.

Speaking of landscape viewing, you’ll find some apps don’t like this – Instagram being a prime example. I was told there was a way to avert this, but it made the app look odd, so the idea was ditched. 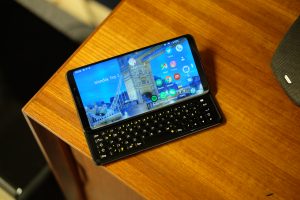 I admire what FX Tec has done with the Pro 1. And while it’s not necessarily a device I can see selling a huge amount of units, it’s great to see something a bit different.