The launch of Windows Home Server (WHS) has opened the floodgates on a wide range of new storage appliances but the Fujitsu Siemens Scaleo Home Server has to take the biscuit for sheer size. This mighty great slab of black plastic is similar in dimensions to a compact desktop PC and comes out fighting at a hefty 8.4kgs.


Nevertheless, if you want a WHS appliance in the home that simply can’t be overlooked then this is the one for you. Build quality is to the same high standard we’ve seen with this manufacturer’s servers and workstations and design looks good as well with the chassis sporting a smart steel mesh waistband that functions admirably as an air grill.


The reason for the Scaleo’s size becomes apparent when you undo the two thumbscrews at the back and slide off the top cover. Underneath is a large tray and the 1900 model on review has a pair of 500GB Seagate Barracuda SATA hard disks with room for two more. Fitting extra drives is simple enough as the vacant trays are fixed to a bracket that swings up for easy access, with power and SATA cables ready and waiting inside. 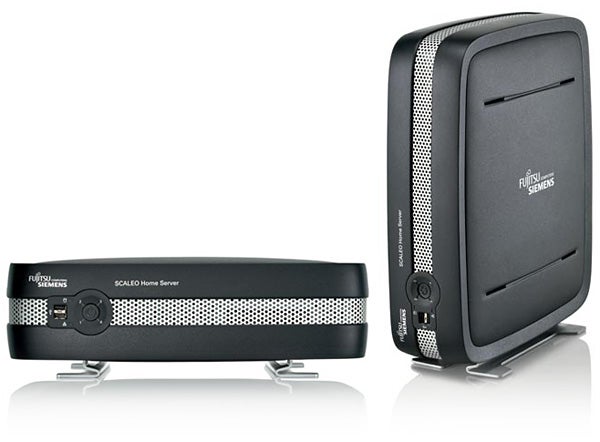 The Scaleo sports a 1.6GHz Celeron 420 processor, 512MB of DDR2 memory and a 256MB IDE Flash module. A Gigabit Ethernet port is provided at the rear and you also get pairs of USB 2.0 ports fore and aft and a couple of eSATA ports as well. The chassis is equipped with two main cooling fans with another smaller one for the power supply, and after the initial power up phase they settled down and were almost inaudible.


WHS is not designed to be managed with a web browser so you start at your first network client and run the CD-ROM based setup utility. This takes you through naming the appliance and providing an administrative password which must contain at least three choices from uppercase or lowercase characters, numbers or symbols. Don’t lose this password otherwise you’ll have to run the appliance recovery procedure and start from scratch again.


Installation is only carried out once on the first client. Subsequent clients are asked for the server’s password and the install process loads the server console and automatically configures the backup facility to run daily between midnight and 06:00am and copy the entire contents of all available volumes. Rather than allow you to select specific folders on each client for backup it will only let you create an exclusion list.

The server console is a cheerful affair that’s very easy to navigate. You can view all attached computers and configure backup settings for each one, set up user accounts and create shared folders. You are covered in the event of a disk failure although rather than use RAID, WHS employs folder duplication where, if selected during creation, it simply creates a mirror of a folder on the second hard disk.


Fujitsu Siemens has added a few extra touches itself as the appliance comes with a TwonkyVision MediaServer add-in that enables you to stream multimedia content to digital media receivers. We tested this on a Vista PC using Windows Media Player and Nero ShowTime and found it worked well enough. The Scaleo power management is another preinstalled add-in and this lets you set daily schedules that determine when the appliance is to be woken up. Once outside these times the appliance will be placed in a hibernate mode to save power. 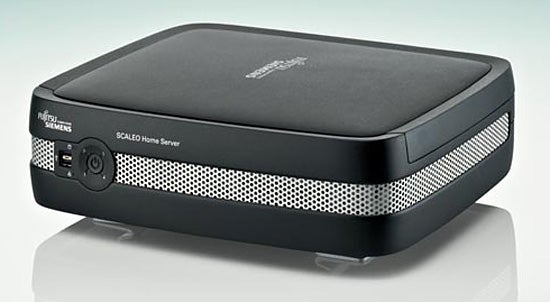 You can add extra services, too, as along with a selection of commercial add-ins, there is a burgeoning community that’s churning out free ones. Installing them is easy enough as you copy the relevant .MSI file to the Add-In directory on the Scaleo, select the settings option in the console and load them from here.


For testing we loaded the free FTP Manager add-in that lets you configure the IIS FTP component in WHS. This adds a new menu option to the server console for adding new sites and stopping and starting the FTP services. However, after adding a new site it wouldn’t appear in the server console. Although not to be fully recommended, we got round this by gaining full remote administrative access to the Scaleo over RDP and configuring the new FTP service from there, which subsequently appeared in the server console.


The Scaleo delivered a mixed bag of results in our real world performance tests. Copying a 690MB video file over Gigabit Ethernet returned average read and write speeds of 40.5MB/sec and 14MB/sec. Folder duplication appears to have no noticeable overheads as we ran the same test using a non-duplicated folder and saw similar speeds. FTP speeds were also identical as copying the same file using the FileZilla utility returned precisely the same read and write rates.


When compared with the ever increasing number of desktop NAS appliances, the Scaleo 1900 comes up well short in the features department. However, if you want nicely automated client backup, media streaming and the biggest WHS box currently available then the Scaleo Home Server is worth checking out.

(centre)”’Make sure you don’t forget your password otherwise you’ll have to restore the OS.”’(/centre)

(centre)”’The appliance can be accessed remotely using a Remote Desktop Connection but be careful what you do.”’(/centre)