The Tablet PC format hasn’t really taken off to the degree that Microsoft was hoping for, although a lot of this is down to the devices that are available. The format attempts to offer the best of both worlds by offering the benefits of hand written notes and a keyboard in one unit. However, early tablet PCs were under powered and had poor battery life, but these issues have been corrected over time.


Running Windows XP Tablet PC 2005, the Lifebook T4010 is the latest Tablet PC from Fujitsu-Siemens. The core specifications are comparable to that of a mid to high-end laptop, with a 1.8GHz Pentium M processor, 512MB of PC2700 DDR SDRAM, Intel 855GME chipset and Intel 802.11b/g wireless networking. Using the full set of Intel hardware also means that the Lifebook T4010 can boast a Centrino sticker. Add to this a 60GB hard drive, a DVD writer – which writes to dual layer DVD+R media at 2.4x, DVD-R/+R at 8x and DVD-/+RW at 4x – and you’ve got some pretty good base specs.


In addition, Fujitsu-Siemens has added a wide range of extra functionally. Bluetooth is the least obvious, as it is tucked away alongside the Wi-Fi functionality and shares the same antenna. Of the more obvious features, at the front of the laptop there is a memory card reader for Memory Stick, Memory Stick Pro, SD and MMC cards. This is also where the headphone and microphone sockets are located together with the speakers. The left hand side is home to the single Type II PC Card slot, a smart card slot for optional security cards, a four pin FireWire port, a single USB 2.0 port and finally an on/off switch for the wireless antenna.


Working our way around to the back, the D-SUB connector and the Gigabit Ethernet port are both hidden behind a protective flap. Next to is an IrDA port as well as a second USB 2.0 port, the 56k modem connector and finally the power connector. On the right hand side is the removable optical drive, which can be swapped for a second battery so you can keep working for longer.

The keyboard is very comfortable to type on, even during extended periods of time and having used the T4010 for five days at CeBIT I wish more notebooks this size had as good keyboards. The touchpad is as good as you would have expected it to be from Fujitsu-Siemens.


The display is however the main focus of the Lifebook T4010 as it is more than something to look at for once. The 12.1in screen, with 1,024 x 768 resolution, might seem small at first, but the Lifebook T4010 only measures 293 x 244 x 37.5 mm (W x D x H) which implies certain restrictions to the screen size. The whole thing weighs 2.2kg with the optical drive fitted, so it just about fits into the truly portable category.


As the Lifebook T4010 doubles as a tablet PC, the screen has only one hinge, mounted in the middle. This enables the screen to be swung around 180 degrees. A latch can also be rotated round to lock the lid into position once in tablet mode an the display switches automatically from landscape to portrait mode when the display is turned around. 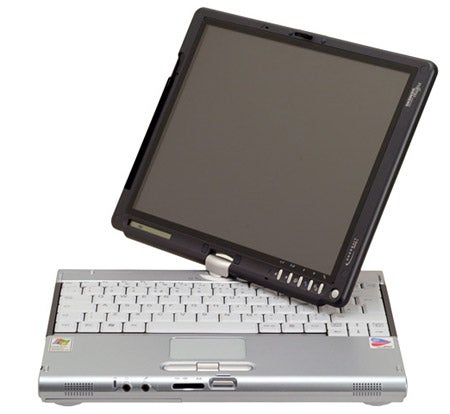 The closest I can describe what the T4010 is like to use in Tablet PC mode is to compare it to an overgrown PDA. Windows Journal is the main application that you would use in Tablet mode, which enables you to scribble down notes. This is really useful in meetings or press conferences, as you can draw doodles and pointers to go with your text. I found it frustrating that I was unable to convert a whole document hand drawn in Journal into text in one stroke but it was great to be able to write on the screen in my own handwriting without paper and have it all fully searchable.

The stylus fits into a slot on the left hand side of the screen when not in use. The stylus is pretty average, both in look and feel, but it is functional. A set of replacement tips are provided, but a spare stylus would have been a good addition in the box. Fujitsu-Siemens also supplies a strap that can be attached to both the stylus and the side of the screen, to secure the stylus to the laptop. The stylus is used much in the same way as on a PDA, although it has an extra button on it that can be set up to act as the right mouse button or to bring up the virtual keyboard. The touch sensitive screen and stylus actually employs Wacom technology, so it is all tried and tested.


There are six buttons along the side of the display which consist of the power switch and five quick access buttons. Two of the buttons enable you to scroll up and down, since this isn’t easy to do with the stylus. The third one enables you to change the screen orientation, while the last two double up as Fn (function) and Alt keys. The same buttons are also used to enter the PIN code , necessary if you take advantage of the BIOS security features that Fujitsu-Siemens has incorporated.


As with several other Fujitsu-Siemens laptops the T4010 had an integrated LCD display at the base of the screen that gives you an indication of the status of battery life, if Wi-Fi is enabled, if the power cable is attached and so on. This is a handy overview feature that I’d like to see on other notebooks.


Looking at the benchmark numbers, the T4010 performed quite well. The battery managed three hours and 27 minutes, not quite up meeting the “up to five hours” claim, but still pretty good. The overall SYSmark 2002 score of 213 is also quite impressive, but our review model shipped with 1GB of memory so the benchmark numbers will be better than the standard machines that ship with 512MB RAM, leaving the second slot free for upgrades. The PCMark 2004 scores highlight the integrated graphics and the 4,200rpm hard drive as low points, but apart from this there is little to criticise about the T4010s performance.


Whether you like the Tablet PC concept or not is a matter of personal preference and you should try and use one yourself before buying, but the T4010 has definitely made me warm towards the format. Having used the T4010 ‘in the field’ I have to say that this is an excellent laptop for anyone on the road. The price is steep considering the specs at £1,514.58 including VAT, but you can virtually think of it as getting two machines in one.


The Fujitsu-Siemens Lifebook T4010 has converted me to the Tablet PC format. The ability to draw directly on the screen is a powerful benefit and it also acts as a fully-functional conventional notebook. Considering the overall features and spec the T4010 should definitely be considered if you are notebook that can do more than the average portable.