Ever hear of this little something called the Eee PC? Yeah, us neither. Seriously though, as most of our readers probably know by now, the EeePC sparked a revolution and pretty much single-handedly created a whole new portable computer category: the netbook. People seem to like it.


Though there have been more entries than I care to count into this sector recently, and from most of the big players, there’s still no end in sight to the new models arriving. The biggest of these is undoubtedly HP’s much-anticipated Mini 1000, but meanwhile, we’re taking a look at another Mini; specifically, the Fujitsu-Siemens Amilo Mini Ui 3520. 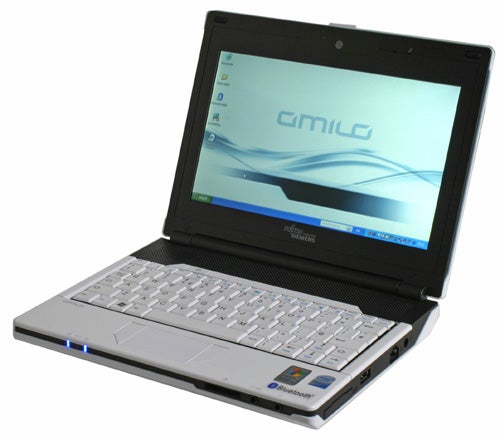 Nearly every netbook on the market uses an Intel Atom N270 CPU, the GMA950 graphics chip and features a similar set of outputs – Fujistu-Siemens’ effort is little different. It also has the usual 1GB of RAM and utilises Windows XP, leaving only things like screen size, hard drive type/capacity and the physical build to distinguish between it and the rest of them.


An 8.9in 1,024 x 600 display puts the Amilo Mini into the same class as the Asus Eee PC 901, Dell’s Inspiron Mini 9 and Acer Aspire One. In terms of build quality, it easily matches the best of these thanks to a remarkably solid feel with no sign of unwanted flex or creak. Similarly to the white Samsung NC10, the finish is the ideal balance between glossy and matte, being fingerprint resistant without appearing dull. 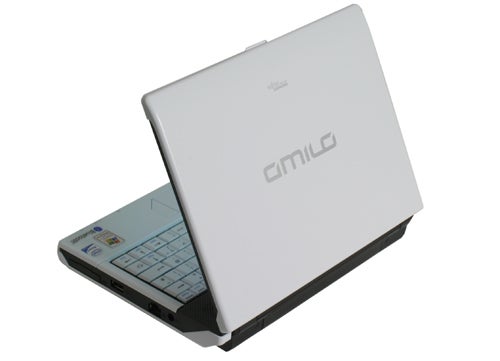 When it comes to looks, the Amilo Mini is quite distinctive; combining industrial angles with curves and semi-matte white with matte black finishes. It’s a look that’s very much a matter of taste and though few would call it stylish, it’s not exactly ugly either.

Don’t like the Amilo Mini’s white lid? Well, this little netbook is uniquely customisable. You see, instead of bringing it out in a range of different colours, Fujitsu-Siemens has various colours of lid-cover you can attach to the netbook, much like on those Nokia mobiles of a few years ago. Except here, rather than removing the netbook’s default lid, you simply clip the new one over it.


Installation is thus really simple. Getting it off again is also easy – sometimes a little too easy, as opening the netbook up can result in the clip-on cover inadvertently coming off. However, with a little care it’s solid enough. A Burgundy Red cover comes with the Amilo by default, but you can also purchase black, blue or pink ones, which come with an additional transparent cover for around £20.

This transparent cover is particular unusual, since it’s designed to let you insert your own design or photograph, a ‘feature’ that sets this Fujitsu-Siemens machine apart from its competitors. So now you can walk around proudly displaying the TR logo on your netbook, with the hand-written words ‘My Favourite Website’ scrawled underneath…


Clearly this is a somewhat gimmicky feature, but if you enjoy customising your possessions this is an added bonus and those that don’t care either way can safely ignore it.


Other optional accessories include a slim external DVD Writer drive for a pricey £100 and a slip case for a far more reasonable £14. While it’s true that many netbooks, such as the MSI Wind, Eee PC and even NC10 come with cases, here you get that Burgundy cover instead.

Moving on, the Amilo Mini’s connectivity is pretty much what you’d expect from a netbook, consisting of VGA and USB on the left, a memory card reader supporting SD/SDHC, MS/MSPro and MMC and 3.5mm audio jacks headphones and a microphone at the front. Another USB port, an Ethernet port and power socket can be found the right. There is also the unexpected and pleasant surprise of a 34mm ExpressCard slot, something very few netbooks offer. 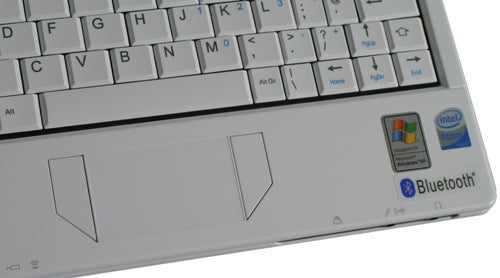 Moving onto the keyboard and touchpad, unfortunately, does much to dispel earlier positives. The touchpad is an okay size and has a pleasant smooth surface, but as with the ill-fated HP 2133 Mini Note and indeed the Acer Aspire One, its buttons are located to the sides. Personally, I don’t find this too much of a problem, especially since the Amilo Mini’s are slightly easier to use. Unfortunately, the reason these buttons were located at the sides on the aforementioned machines was to make room for excellent keyboards, while the keyboard on the Amilo is frankly rubbish. 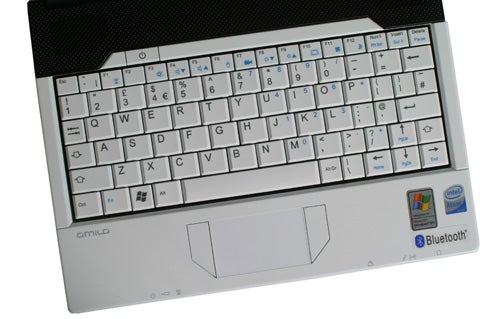 To put it simply, this is the virtually the same keyboard as that found on my 7in Eee PC 701! Despite good feedback, it has those same small, cramped keys that many will find difficult to hit and that same lousy placement of the right-Shift key beyond the upward cursor key. Fujitsu-Siemens hasn’t even come close to utilising the available chassis space, although this is a crime shared with the Dell Mini.

Above the keyboard is a large speaker section, meaning that hopefully the speakers at least will be a strength of the Amilo Mini. And I must admit they’re slightly better than average for a netbook, though that’s not saying much. As long as you keep them at a reasonable volume though, they’ll do a good enough job for even the occasional film; since you’re already watching it on an 8.9in screen, they’ll provide an audio experience to match. 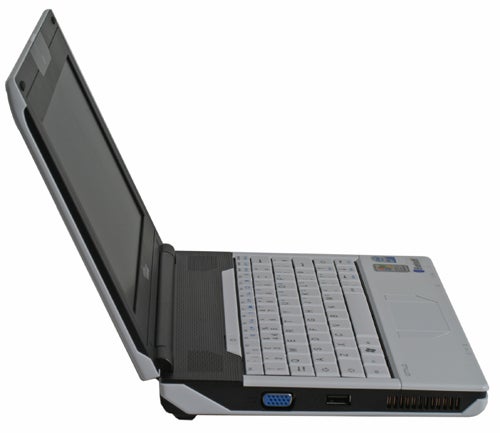 Speaking of the screen, it’s fairly good. Though text isn’t the sharpest and greyscale performance is only just above average for a netbook, there’s no sign of backlight bleed and despite some marked contrast shift viewing angles are really very impressive for this category. It’s also easy to view in sunlight.


Getting into the internals of the machine, as mentioned before we have the usual Intel Atom N270 processor running at 1.6GHz on a 533MHz FSB. This power-frugal unit does a good job of everyday tasks like word processing and standard definition video, though encoding, gaming and high-quality HD video are best left to more capable CPUs. 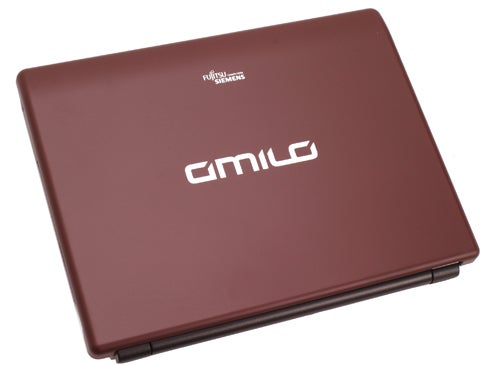 This is, as usual, backed up by 1GB of DDR2 RAM, which again is plenty for a netbook’s target tasks. Unlike some models which either use or offer the option of flash-based storage, the Amilo Mini comes with a 60GB hard drive. While on the small side compared to the competition (the Acer Aspire One, for example, comes with 120GB), the amount of permanent storage usually isn’t as important on a netbook and Fujitsu-Siemens has indicated 120GB models will be available before year’s end. Unlike the Aspire One, Fujitsu-Siemens’ netbook does have Bluetooth on hand and of course WiFi is also present, though it’s not of the Draft-N variety.


A last noteworthy feature of the Amilo Mini is its Silent Mode. Activated through a keyboard shortcut, this clocks down the CPU and GPU to make for a quieter machine during light workloads, a feature that’s especially welcome on a small low-power machine like this.

As far as software goes, there’s not much to say other than it runs Windows XP Home and comes with Cyberlink YouCam, Norton Security Suite and Fujitsu-Siemens Systems Diagnostics. The latter can be used to extensively check the hardware of your entire system, including hard drive, memory, CPU, etc. Having an office suite pre-installed would have been nice, but at least Open Office is competent and free to download. 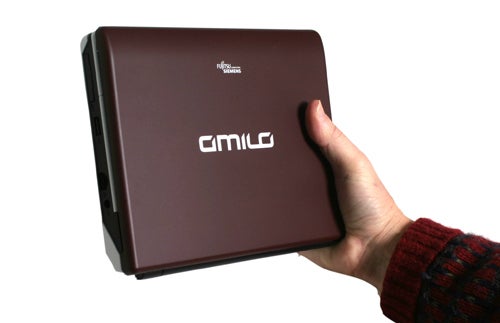 Onto that all-important battery life, things are fairly par for the course, though the Amilo Mini does do slightly better than Dell’s Inspiron Mini 9. Fujitsu-Siemens has provided a 2200mAh battery, which managed three hours of playing back video at 50% brightness and with wireless turned on. More conservatively, doing general tasks at a very usable 20% brightness with wireless turned off, the Amilo managed a decent four hours and 20 minutes. Good news is that Fujitsu-Siemens has indicated availability of six-cell batteries by the end of this month.


So is the Fujitsu-Siemens Amilo Mini Ui 3520 worthy of your hard-earned 260-odd quid? Though perfectly competent, unless you really need an ExpressCard slot or Bluetooth, go for the Acer Aspire One instead. For around the same outlay you get a netbook that’s styled more attractively, has twice the hard drive capacity and for which six-cell batteries are already available for around £60. And though it’s not quite as solid and weighs around 100 grams more than the Amilo Mini’s 1.14kg, it’s also slightly smaller. 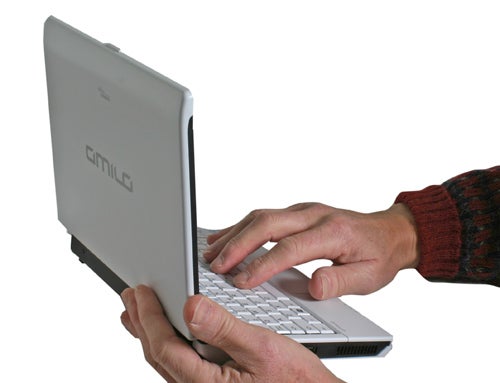 Most importantly, it has a keyboard that’s so much better it’s in a different league altogether. Also, if you’re cash-strapped and don’t mind Linux, going for the Linpus Linux edition of the Aspire One will save you £30. If, on the other hand, you can afford an extra £40 and don’t mind a few extra grams and centimetres, the Samsung NC10 (which won our Best Netbook of 2008 award) beats them both in almost every regard.


Aside from the dreadful keyboard, there’s nothing particularly wrong with Fujitsu-Siemens’ stab at the netbook and if you’re the type that likes changing your tech’s colour regularly it’s the only choice. But in a market as crowded as this that’s no longer enough for most consumers and there are better alternatives than the Amilo Mini Ui 3520.