The very first plasma TV I ever saw was a Fujitsu. Back in 1997 while I was still working at PC Pro magazine, I found myself huddled in a meeting room with some guys from the now dead Home Entertainment mag, while the techs from Fujitsu unpacked a then massive 42in plasma. Of course back then the resolution was nowhere near high definition and the lifetime was laughable by today’s plasma standards, but it didn’t stop me and everyone else in the room trying to figure out where they could get almost £12,000 to buy one. 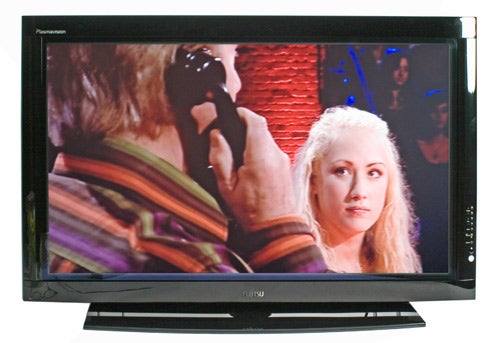 Despite the gargantuan price tag, Fujitsu assured me that it had already taken many orders for the screen, highlighting one particular customer who had ordered one for his house and another for his yacht! It’s therefore somewhat strange that even though Fujitsu pioneered plasma technology, it’s not a name that jumps into most consumers’ heads when they think of plasma TVs.


The reason that Fujitsu isn’t as prevalent in the consumer space is because the company concentrated heavily on the public information sector. If you think back to the late nineties, you’ll remember that most big train stations and airports switched their information boards to 42in plasmas, most of which were supplied by Fujitsu. So, although there was nothing stopping a consumer from putting a Fujitsu screen in their living room, it wasn’t as obvious a choice as say a Panasonic or Pioneer. And even if you did consider a Fujitsu, the screens just never looked as living room friendly as the competition. 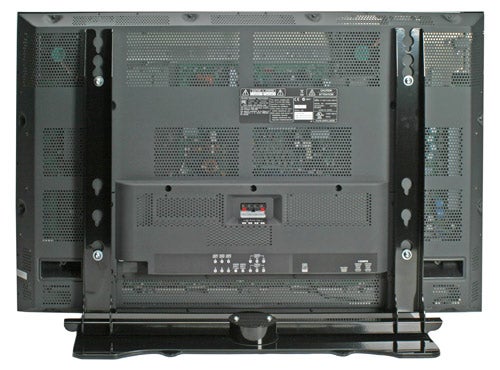 Fujitsu is obviously aware that it has been missing out on a big market, and is attempting to address the above issues with its new 58 series, which ships in 42in and 50in varieties – it’s the 42in version that I’m reviewing today. The first thing that’s plainly obvious when you unbox the P42XHA58 is how good it looks – there’s no way that you could mistake this screen for a public information display! The entire bezel surrounding the screen is finished in glossy black, or piano black if you like. Coupled with the glossy black pedestal stand, the effect is stunning – this is undoubtedly one of the best looking TVs that I’ve ever seen!


So, Fujitsu has shaken off its non-consumer focussed image when it comes to design, but it hasn’t quite gone the whole hog because this isn’t, in the true sense of the word, a TV. You see the P42XHA58 doesn’t actually have a tuner. Whereas some TVs may be lacking a digital tuner, this one has neither a digital or analogue tuner. This situation is compounded by the fact that this Fujitsu also lacks any built-in speakers! All this makes it clear that Fujitsu expects its screens to be used as part of a serious home cinema installation, rather than a stand alone TV, and if you’re in the market for such a set up, the P42XHA58 has a lot going for it.

This Fujitsu may not have a tuner, but it has no shortage of inputs. You get two HDMI inputs for digital high definition sources like a Sky HD box, HD DVD or Blu-ray player or even a PS3. If you do need more HDMIs, you can always go for an HDMI switcher, with Belkin’s three port switcher available for around £80. That will give you a total of four HDMI inputs, which should be sufficient for even the most well equipped AV enthusiast. Unusually you also get two component video inputs for analogue high definition sources like the Xbox 360, or standard definition progressive sources like the Nintendo Wii. There’s also a D-SUB input for hooking up a PC, along with S-Video and (God forbid) composite video. There’s no sign of any Scart sockets though. Curiously, there are also three audio inputs, despite the lack of speakers. This is because you can connect external speakers – there are speaker terminal outputs at the rear of the screen.

This Fujitsu ticks all the HD Ready boxes and then some. As well as having the required inputs, it has a native resolution of 1,024 x 768 and will accept the required 720p and 1080i input signals. Even more impressive is that this screen will accept a 1080p signal via both HDMI and component connections. If you’re wondering about the native resolution being resolutely 4:3 rather than 16:9, don’t worry. This is common on plasma screens, where the pixels are slightly elongated to give a widescreen aspect ratio. It’s interesting to note however, that the 50in version of this screen sports a native 16:9 resolution of 1,366 x 768.


Dipping into the menus, it’s clear that this screen is aimed at the serious home cinema enthusiast, with many settings that would confuse the average consumer. That said, once you’ve set things up properly, there shouldn’t be much need to adjust anything unless your room is very bright in the daytime and very dark at night. But Fujitsu has thought about that too, since this screen has an integrated ambient light sensor, which will adjust the luminance level according to how bright the room is. 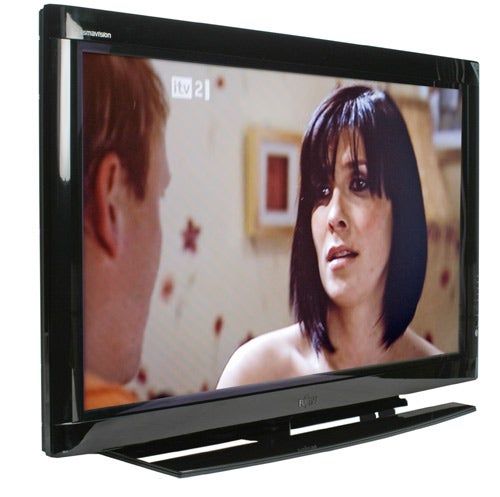 Standing out in the list of adjustment options are both signal and drive contrast, although the latter will obviously be affected by the ambient light sensor. There are also five preset picture modes – Natural, Fine, Effective, Conventional and Still. I found that the Fine setting gave the best results for movie and TV watching, with the screen producing very natural colour tones, but not at the expense of vibrancy. You can also adjust the black level to suit your taste, as well as adjusting the gradation between lights and darks.

There’s also 3D noise reduction and MPEG noise reduction – Fujitsu calls the latter CODEC noise reduction, but it’s fair to say that any CODEC you use will be based on some form of MPEG. Whatever you call it, it should reduce the appearance of blocking and mosquito noise. Another interesting inclusion is the Progressive Scan setting, which optimises the de-interlacing of input signals. Here you can choose to optimise the screen for 24fps (the speed that movies are shot in) or 30fps (for NTSC based source signals) – strangely there’s no optimised setting for 25fps PAL, but maybe Fujitsu feels that the 24fps setting is close enough. All this image processing is wrapped up into Fujitsu’s AVM II (Advanced Video Movement) package, and as picture processing goes, it does a pretty good job – with high definition sources at least. 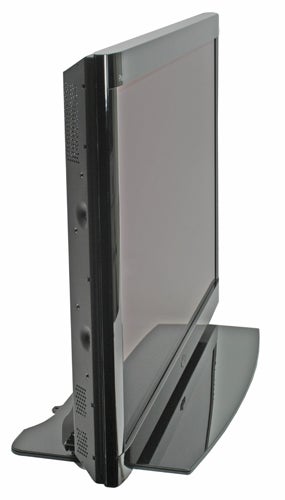 Feeding the P42XHA58 a diet of top quality high definition source material produces some of the best results I’ve seen on an HDTV. I hooked up Toshiba’s high-end HD-XE1 HD DVD player (a full review of which will appear soon), and the results were very impressive indeed. I set the HD-XE1 to output 1080p and the Fujitsu had no problem accepting the signal over HDMI. The P42XHA58 produced a crystal clear image when watching Superman Returns – jumping to the scene where the man of steel saves the plane and space shuttle, the Fujitsu produced a stunningly sharp image, even with masses of movement, flames and a healthy serving of black smoke to contend with.

With fast motion and extremely bright images failing to faze this screen, I threw some dark and moody content at it. Miami Vice may be a God awful movie adaptation of the iconic 80s TV show, but it’s great for separating the wheat from the chaff when it comes to black levels and low light detail resolution. Again, the P42XHA58 took things in its stride, producing truly deep black levels, while maintaining minute details in dark areas – a truly stunning performance, although still not enough to make me ever want to watch the movie again!

Things proved just as impressive over a component video connection. I connected up an Xbox 360 and set the output to 1080p – again the Fujitsu had no problems dealing with the signal. Firing up Gears of War was a revelation – with a game that’s as dark and gloomy as Gears, the superb contrast and black level performance on this screen really showed off Epic’s masterpiece. 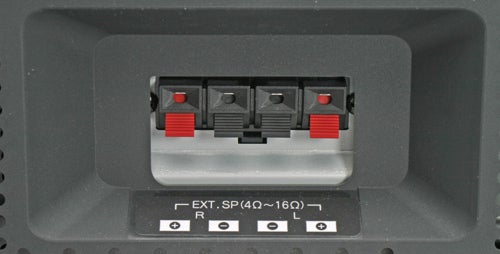 So, the P42XHA58 excels in the area of picture quality? Well not quite, because truly stunning as its high definition performance is, things aren’t nearly so good when you feed it a less than perfect standard definition source. It seems like all of that awesome picture processing that’s going on with HD material just goes to sleep when you throw standard def content into the mix. With a poor SD signal, the P42XHA58 produces pictures that suffer from compression artefacts and generally look dirty and grainy, which is a shame considering this screen’s HD performance.


Of course it could be argued that this type of screen is likely to be coupled with the best quality high definition sources, and to be fair, that’s a fairly sound assumption. In fact, I’d hope that whoever specs this screen as part of their home cinema installation also specs a high-end universal remote, because the remote control that Fujitsu supplies with this screen is truly horrible!

Another factor that places the P42XHA58 firmly in the serious home cinema install category is the price. The best price I could track down for this screen is £2,399, which is a lot to pay for a 42in plasma TV, let alone one that doesn’t feature a tuner or any speakers! In fact, you can pick up a the Pioneer PDP-507XD 50in plasma for under £1,800 now – and you’re getting a digital tuner and speakers thrown into the bargain!


It’s a shame that Fujitsu has chosen to price the P42XHA58 so high, because if you’re looking for a top quality high definition performer for your AV install, this really is a superb screen. If however, like most consumers, you’re looking for a good all round TV that can handle standard definition as well as HD, you’re going to have to look elsewhere. Especially if you don’t use an external tuner and speaker setup already.