Few if any manufacturers can claim to have as much experience in the plasma TV game as Fujitsu. In fact, it might fairly argue that it made the first commercially available plasma TV to hit the UK: 1997’s PDS4201E-H – a snip at just £11,600! So why then, you might wonder, isn’t Fujitsu such a household AV name as Sony or Panasonic?


The answer is simply that like NEC, whose 42XR4 TV we checked out a few days ago, Fujitsu has tended to focus its plasma efforts on the corporate/business presentations market rather than home users.


That’s not to say that many of its previous screens haven’t worked admirably as domestic goggle boxes – indeed, we believe one David Beckham has a Fujitsu plasma tucked away somewhere in one of his mansions. But in terms of features, connections and points of sale, Fujitsu has definitely not really yet trodden on the plasma shoes of the mainstream consumer electronics brands. 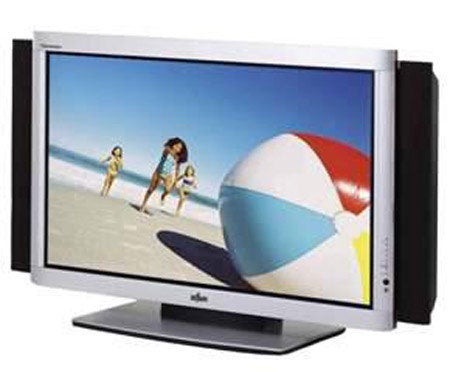 Until now. Its new 42in P42TA51ES is every inch a domesticated plasma device, apparently designed from the ground up to perform in the living rather than the board room.


The proof of this starts to appear as soon as you take the TV out of its box, as Fujitsu’s usually rather plain styling is enhanced by a new bezel that combines economy of size with elements of razzle dazzle such as a subtly metallic finish and curvaceous side panels. It’s not as in your face as some of today’s popular designs, but if you’re after a screen that’s big but won’t dominate your room, the P42HTA51ES fits the bill perfectly.


The P42HTA51ES doesn’t have any speakers built in, but fear not, for you get an external pair included in the very reasonable £1,995 price, offering you the flexibility of either fastening them to the sides of the screen or positioning them elsewhere in your room. We’ve come across these speakers – or some like them – before with previous Fujitsu screens, but on those previous occasions they’ve been pricey optional extras rather than included in the screen’s price.

Fujitsu generally has little truck with such TV ‘niceties’ as Scarts and built-in tuners, but the P42HTA51ES has both. Admittedly there are only two Scarts, and the tuner can only receive analogue broadcasts. But hey – any Scarts and tuner are better than no Scarts and tuner, right?


Other connections happily include the HDMI and component video inputs demanded by the AV industry’s HD Ready spec list, and there’s a D-Sub input for attaching a PC. More signs that this Fujitsu’s interest in normal TV duties is perhaps a bit reluctant, though, can be seen in the P42HTA51ES’s lack of any dedicated 4-pin S-Video or RCA composite video inputs – though you can at least get both these lower-quality signal types into the TV via the Scarts if you really need them.


Other key specifications of the P42HTA51ES include a respectable claimed contrast ratio of 3000:1, and a rather odd looking native resolution of 1024x1024i. This comes about from the TV’s use of Alternate Lighting of Surfaces technology, or AliS for short. 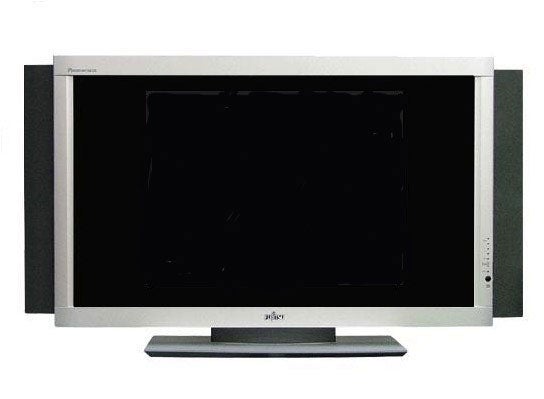 For a full explanation of how ALIS works check out our recent review of the Hitachi 42PD9700. But if you’re happy with a short answer, it would be that ALIS screens share their horizontal electrode strips (512 of them, in this case) between two phosphor lines rather than the customary method of using an electrode strip for each single line. The screen’s then alternate the electrode’s power between the two lines so fast that your eye can’t perceive the change and so is ‘fooled’ into seeing twice as many continuously lit lines as there are genuine electrode lines.


If the previous paragraph has left you bewildered, don’t worry; all you really need to know about ALIS is that it makes this Fujitsu’s native resolution high enough to qualify for the HD Ready logo.


As befits any self-respecting home-centric plasma TV these days, the P42HTA51ES sports a suite of processing systems designed to make its pictures better. Subsumed under the catch-all title of AVM II can be found MPEG noise reduction, mosquito noise reduction, and systems for making colours look more natural and contours less jagged.

As might be expected of such an affordable 42in plasma, other features are pretty thin on the ground. In fact, the only things warranting a mention here are a white-screen system for tackling plasma’s screenburn problems, separate drive and signal contrast adjustments, and a couple of movie-friendly picture presets.


Unfortunately it doesn’t take long in the company of the P42HTA51ES’s pictures before a feeling of depression sets in, as they fall prey to a single but crushing problem: horrible colour tones.


This affects the picture in four separate ways. First, greens look grimy and artificial. Second, reds look orangey and unnatural. Thirdly, skin tones sometimes make actors look more like orcs than real people. And finally colours tend to look more subdued than we’re used to seeing from today’s plasma TVs. What this all adds up to is a plasma picture that looks like a TV from at least two or three years ago rather than something circa 2006. Not good.


What’s especially demoralising about these multiple colour hiccups is the fact that in other ways the P42HTA51ES’s pictures are perfectly respectable. Other ‘old-style’ plasma problems like fizzing noise over motion and colour banding are pretty well contained, and fine details are acute enough to do decent justice to the increased sharpness and texture of high definition sources. Black levels are adequate too, giving pictures some sense of depth and solidity in spite of the TV’s lack of colour vibrancy.


Sonically the P42HTA51ES is no slouch either. The speakers are likeably powerful and deliver a clean, dynamic and distortion-free sound. But ultimately all of the P42HTA51ES’s strengths have to play a distant second fiddle to the general colour unpleasantness.


While Fujitsu has proved that it can do the business with much bigger screen sizes, this 42in offering is way off the pace being set by most rival brands these days.