As photographers, we all like a challenge, so when I was asked if I’d like to attend the FIA World Endurance Championship at Silverstone in Northamptonshire, to try out the new Fujifilm XF 100-400mm f/4.5-5.6 R LM OIS WR lens, I jumped at the chance. However, as I step out of the car into a deep puddle and glance up at dark clouds, I think, ‘This isn’t how I envisaged my day starting’.

After donning my cagoule and making my way to the press centre, I decided to accept the conditions for what they are. Today’s assignment is not only going to be a demanding test for the lens, but also for the Fujifilm X-series cameras in my bag, which I admit I’ve been slightly sceptical of using for motorsport and fast-paced action in the past. Would this be the day that changes my perception of the speed and response of autofocus on the X-series cameras?

After picking up my press tabard, I prepare to shoot the first practice session of the day by coupling the lens to the front of my Fujifilm X-T1. Although I have an X-Pro2 at the bottom of my bag, I opt for the X-T1 because I find it handles better with larger and heavier lenses, and feels more DSLR-like when it’s raised to the eye with its centrally positioned EVF. 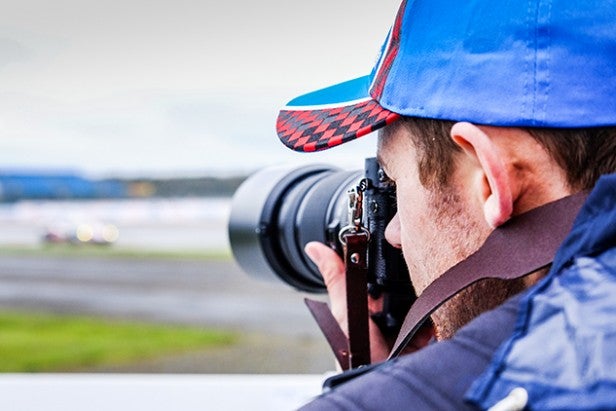 The first advantage I become aware of is the weight saving. Compared to my Canon EF 100-400mm f/4.5-5.6L IS II USM that I typically use for motorsport, the lens is 265g lighter. This might not sound like a huge weight saving, but trust me every gram you can save is a bonus when you’re lugging kit around a track all day. One way Fujifilm has managed to shed weight from the lens is to use high-quality plastic in the construction of the barrel, rather than metal. Needless to say, it doesn’t feel quite as solid as a telephoto zoom with a metal body, and for the price I would have liked to see the switches made from metal rather than plastic. These points aside, it’s a good-looking lens. 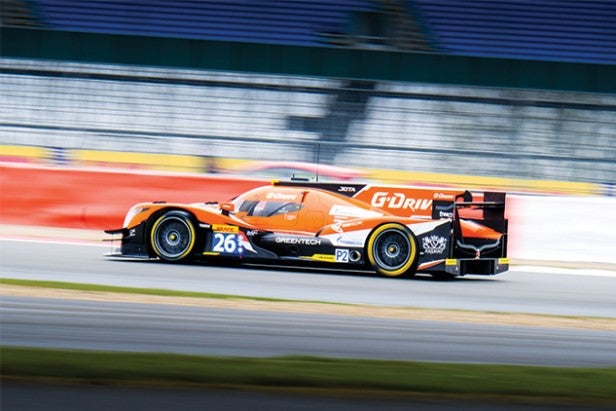 Prior to heading trackside, I attach my vertical battery grip to the X-T1, which improves the balance and handling of the lens when it’s attached to such a compact body. I take up my first vantage point close to the pit-lane entrance and use the next few minutes to familiarise myself with the position of the switches on the barrel. The lowest of the three is used to engage and disable the optical image-stabilisation system. Above it are two further switches. The first appoints manual aperture control via the aperture ring that’s located behind the focal length markings. The aperture ring offers excellent feedback and notches into position when it’s rotated. The switch above limits the focusing range, with the option to set it from the minimum focus distance (1.75m) to infinity or 5m to infinity. 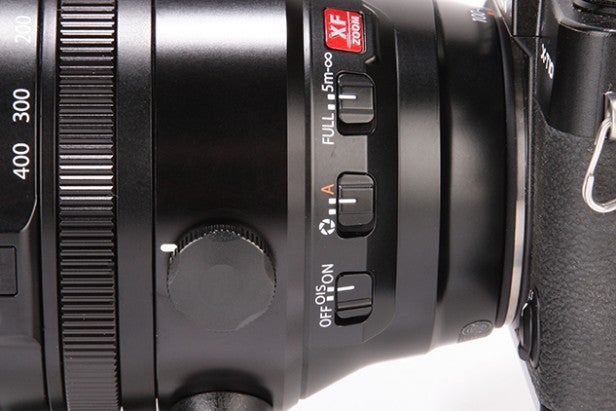 Unlike many telezooms, there’s no MF/AF switch on the barrel. Instead, single, continuous and manual focus modes are controlled via the body of the camera. After knocking back the zoom-lock switch, I attach and secure the plastic lens hood, which is large enough to prevent raindrops hitting the front element and locks with a reassuring click.

It’s at this point I notice the hood is equipped with its own hood-release button and filter-slide window – the latter being a useful feature for those wishing to rotate polarising filters effortlessly without the need to remove the hood altogether. Setting the X-T1’s drive mode to continuous, AF to continuous and the AF mode to zone, I’m all set up and ready to use the lens. 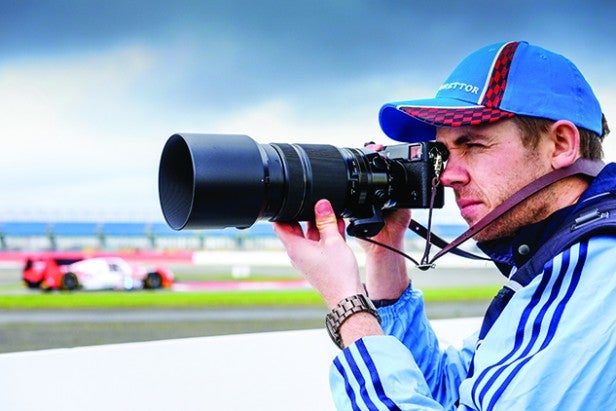 The finely grooved rubberised zoom ring is falling nicely to hand, and loosening off the tripod collar allows me to upturn the small mounting plate and attain better purchase of the barrel. The zoom operates across its 100-400mm focal range (equivalent to 150-600mm in full-frame terms) in less than a quarter turn, and provided your left hand supports the lens directly beneath it’s possible to extend the lens to full telephoto with a short, sharp twist of the zoom ring. The motion is fluid across its extensive focal range, yet it requires some physical effort to shift the optics – the result of a complex lens configuration that’s made up of 21 elements in 14 groups. A quick glance at the aperture in the viewfinder tells me it closes to f/5 at 200mm and continues to gradually close thereafter, operating at f/5.6 between 350mm and 400mm. 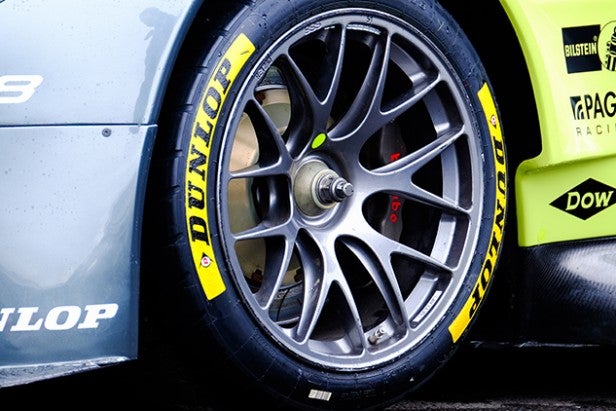 My first attempt at panning results in a few blurred frames and the speed of the cars is taking time to adjust to. Refining the shutter speed to 1/125sec improves my success rate of pin-sharp shots, and to find out how well the X-T1 and lens can continuously focus on cars travelling directly towards the camera at over 100mph I relocate to a faster corner on the track. Even with the shutter speed set beyond 1/1000sec and the smaller central group of nine AF targets selected in zone AF mode, the subject is proving too fast for the autofocus to keep up. Inspecting a burst of 11 frames at 8fps reveals I’m getting one or two frames sharply in focus. This less-than-ideal rate forces me to prefocus on a precise area of the track in single AF before locking the focus to MF. Firing off another continuous burst at 8fps doesn’t see my success rate improve. It’s time for a rethink. 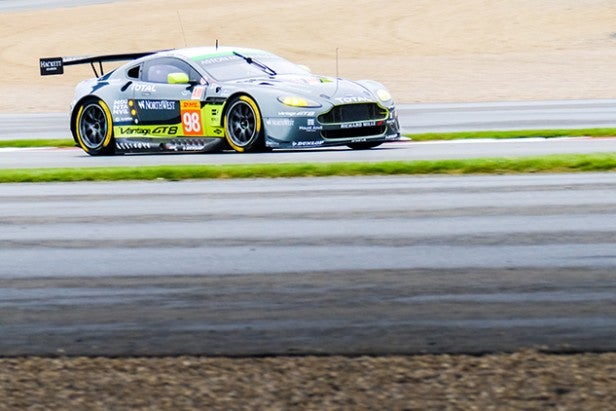 As I open my bag to find a lens cloth, I glance down at the X-Pro2. Would this be the answer to my focusing woes? It turns out that substituting the X-T1 for the X-Pro2 was the best decision I made all day. After setting the X-Pro2 to continuous focus, the focus range of the lens to 5m-infinity and setting up the central group of nine AF targets in zone AF mode, I rattle out another burst to capture cars travelling directly towards the camera. This time, I shoot 12 frames at 8fps. A quick magnified inspection on the screen reveals at least six are sharp and usable – a much better success rate. I’ll admit the lens isn’t handling as well with the X-Pro2, but for today at least this is a compromise I’m prepared to make. 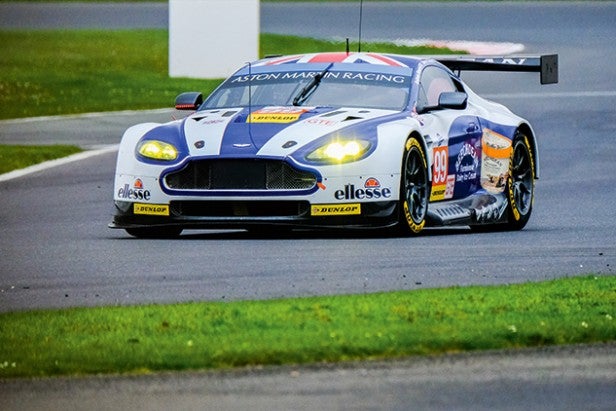 In between races, I download my shots and inspect them closely on my MacBook. It doesn’t take long before I realise the image quality produced by the lens is excellent. Sharpness from 100-300mm, even at the lens’s widest aperture, is impressive across the frame. Towards the telephoto end of the zoom, some signs of softening were noted at f/5.6, with diffraction also softening the finest detail beyond f/11. Vignetting is handled exceptionally right through the focal range, and the same can be said about chromatic aberrations, which were absent from all images on the day and subsequent test images I captured in brighter conditions a couple of days later. 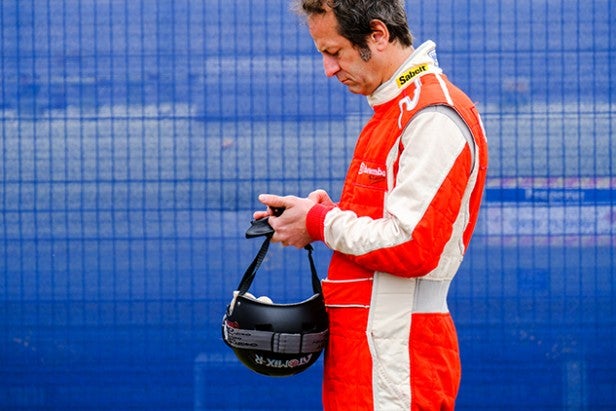 In the afternoon, I spend a considerable amount of time testing the lens with Fujifilm’s 1.4x teleconverter (£329), which effectively converts the lens into a 210-840mm telephoto zoom in 35mm-equivalent terms. The extra length enables me to fill the frame tightly with my subject for greater visual impact, but what with the converter reducing the maximum aperture of the lens to f/6.3-8 I have little choice but to push the X-Pro’s sensitivity up to ISO 3,200 or beyond to achieve a fast enough shutter speed to freeze the cars in their tracks. I also find that the autofocus speed remains brisk with the 1.4x converter attached. 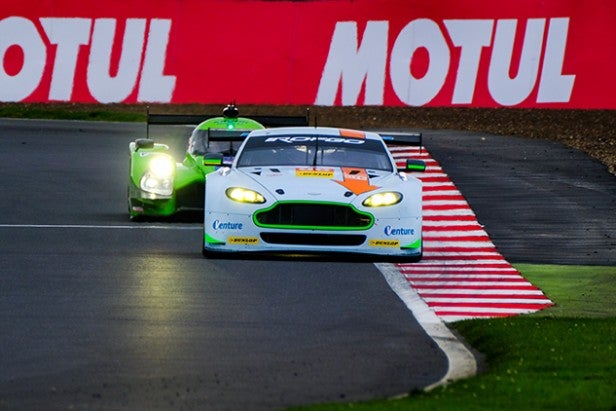 The OIS abbreviation in the lens name indicates it is equipped an optical image-stabilisation system. This is controlled via the OIS switch on the barrel beneath the focus-limit and manual-aperture control switches. However, unlike some telezooms that provide more than one mode to ensure intentional panning and tilting isn’t mistaken for camera shake, there’s no second mode on this lens – it’s set to either on or off. 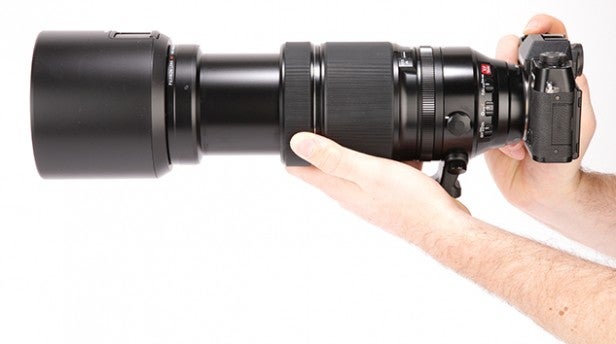 The image-stabilisation system is effective to 5 stops, and in between shooting I had the chance to catch up with Fujifilm’s motorsport ambassador, Dirk Bogaerts, who uses the OIS system for every shot he takes, including panning shots. Dirk also recommends keeping the IS mode set to continuous from the camera’s menu, which constantly stabilises the lens all the time OIS is switched on. Extending the zoom to 400mm and carrying out a test in between races confirmed the IS system’s effectiveness. I was able to shoot sharp shots at as slow as 1/30sec handheld. Pulling back to 100mm and repeating the same test revealed it’s possible to achieve sharp shots at a slower 1/8sec shutter speed, but you need a steady hand. 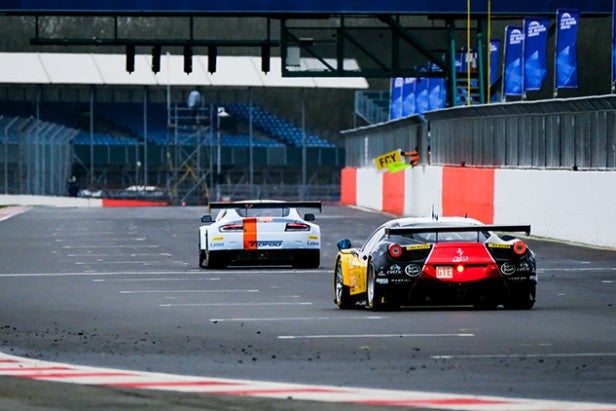 After a full day’s testing, I can say the XF 100-400mm f/4.5-5.6 R LM OIS WR is a lens that fulfils the appetite of those who’ve been waiting patiently for a longer zoom in Fujifilm’s line-up of XF lenses. It doesn’t have the metal build we typically expect to see from a zoom of its pedigree, but as I discovered, this plays a vital role in keeping it as light as possible. It’s a lens that can be carried over the shoulder for long periods without discomfort, and its image-stabilisation system is so effective that it doesn’t always require the use of a monopod or tripod. 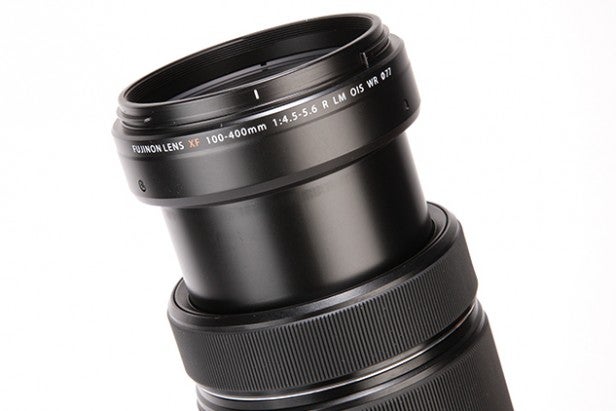 I went the whole day supporting the lens in the palm of my left hand and didn’t find myself calling upon my monopod once. The lens’s weather resistance and fluorine coatings give you the confidence you need to use it without any form of protection, and it continued to work without fault after a drenching and many persistent showers. 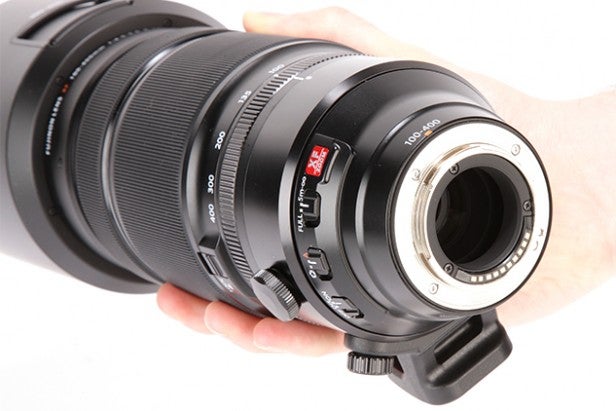 My visit to Silverstone turned out to be a demanding workout, not only for the lens but also for my two Fujifilm X-series cameras. The lens handled superbly and looked the part coupled to the X-T1, but swapping to the X-Pro2 was the turning point of the day – the excellent response and accuracy of its autofocus system increased the number of sharp shots I was able to capture in quick succession. If Fujifilm can combine the X-T1’s handling with the hasty AF performance of the X-Pro2, then wildlife, action and sports shooters will have the perfect partner for the XF 100-400mm f/4.5-5.6 R LM OIS WR.