Fuji's smallest, lightest instant camera ever is more of a digital camera with a built-in printer, albeit one that still uses Instax format film. You compose with an LCD screen, not a viewfinder, and if your shots don't look too hot you don't have to print them, which is less wasteful - if not quite as charming as a true instant camera. The digital versions it saves aren't particularly detailed or high quality, but audio recordings add extra novelty, and its smartphone companion app is second-to-none. No other Instax can slip into a pocket like the LiPlay can, and it's reasonably priced too. It's not perfect, but it is the best hybrid around right now.

With the retro appeal of instant photography seemingly here to stay, the pressure is on for Fujifilm to stay on top – it is named after the stuff, after all. The Instax Mini LiPlay follows the latest trend of combining instant with digital, sticking with the film format that Fuji does better than anyone, but also adding Bluetooth support for smartphone fans and filters for the Snapchat generation.

It’s an evolution of the part camera, part portable printer Fujifilm Instax SQ20, only in a much smaller package, so you don’t have to think twice about taking it with you when leaving the house. 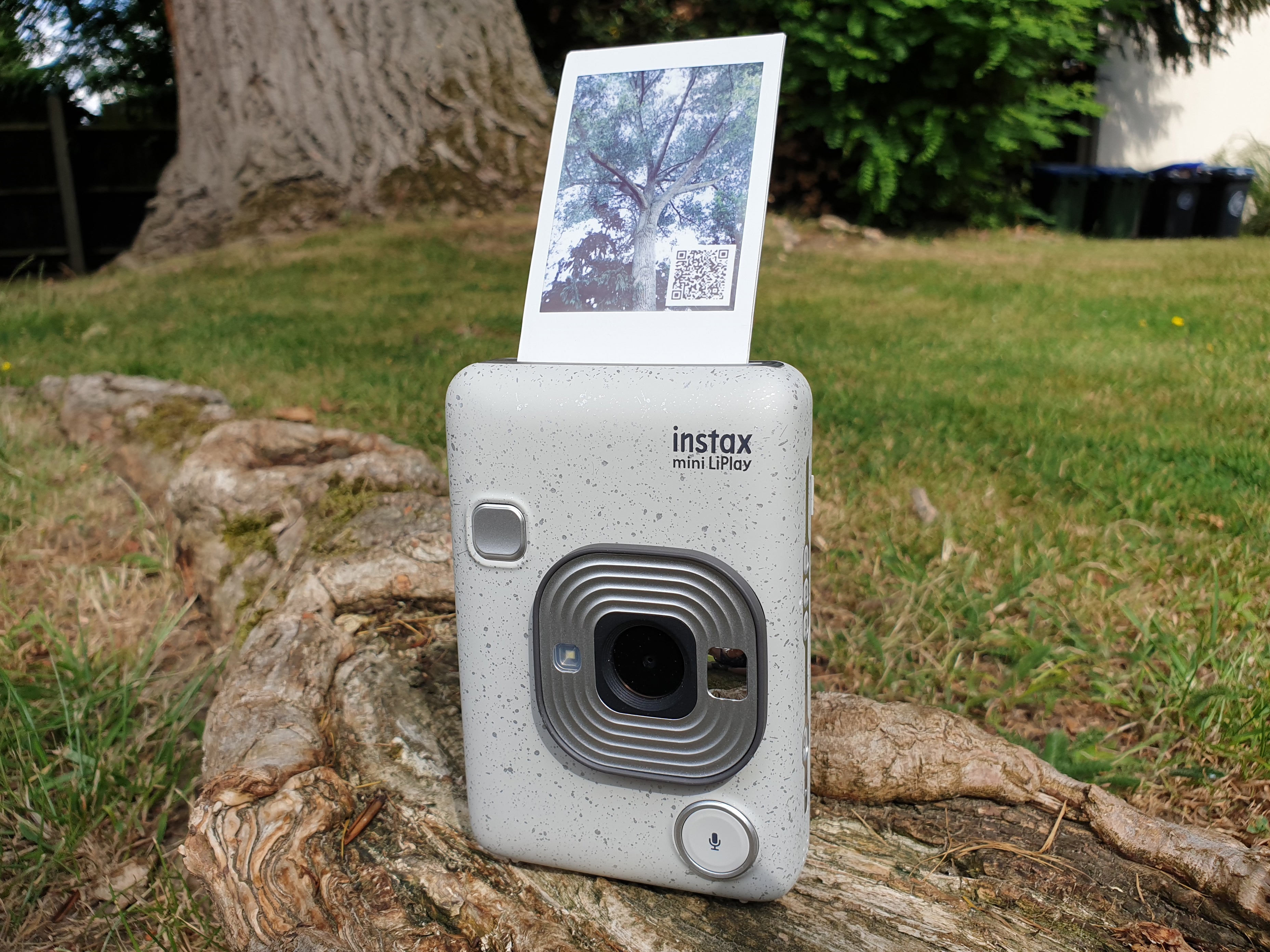 An extended feature list now includes audio recordings, which are uploaded to the cloud through a much-improved companion app and linked to in your prints using QR codes, proving Fuji knows instant cameras need to put fun above just about everything else.

While it may not be a true instant camera, it captures the spirit of instant while adding a modern spin on the idea – and does it better than any of its rivals.

Design and features – Instax cameras just don’t get any smaller, or more feature-packed

The Instax Mini LiPlay isn’t really an instant camera, as it doesn’t expose its film directly – a digital sensor sits between lens and film, which helps shrink the whole thing down to a much more pocket-friendly size. It’s comfortably smaller than any other Instax camera, and about on par with rival Zink-format instants like the Canon Zoemini S and Polaroid Snap Touch.

The textured plastic construction is reassuringly weighty once you’ve loaded a pack of film into the rear door, although the button placement isn’t the most straightforward. The shutter button is on the front, above the lens, while the menu controls are on the back and it’s shortcuts keys on the side. It’s very much a camera to use two-handed, in spite of its size. 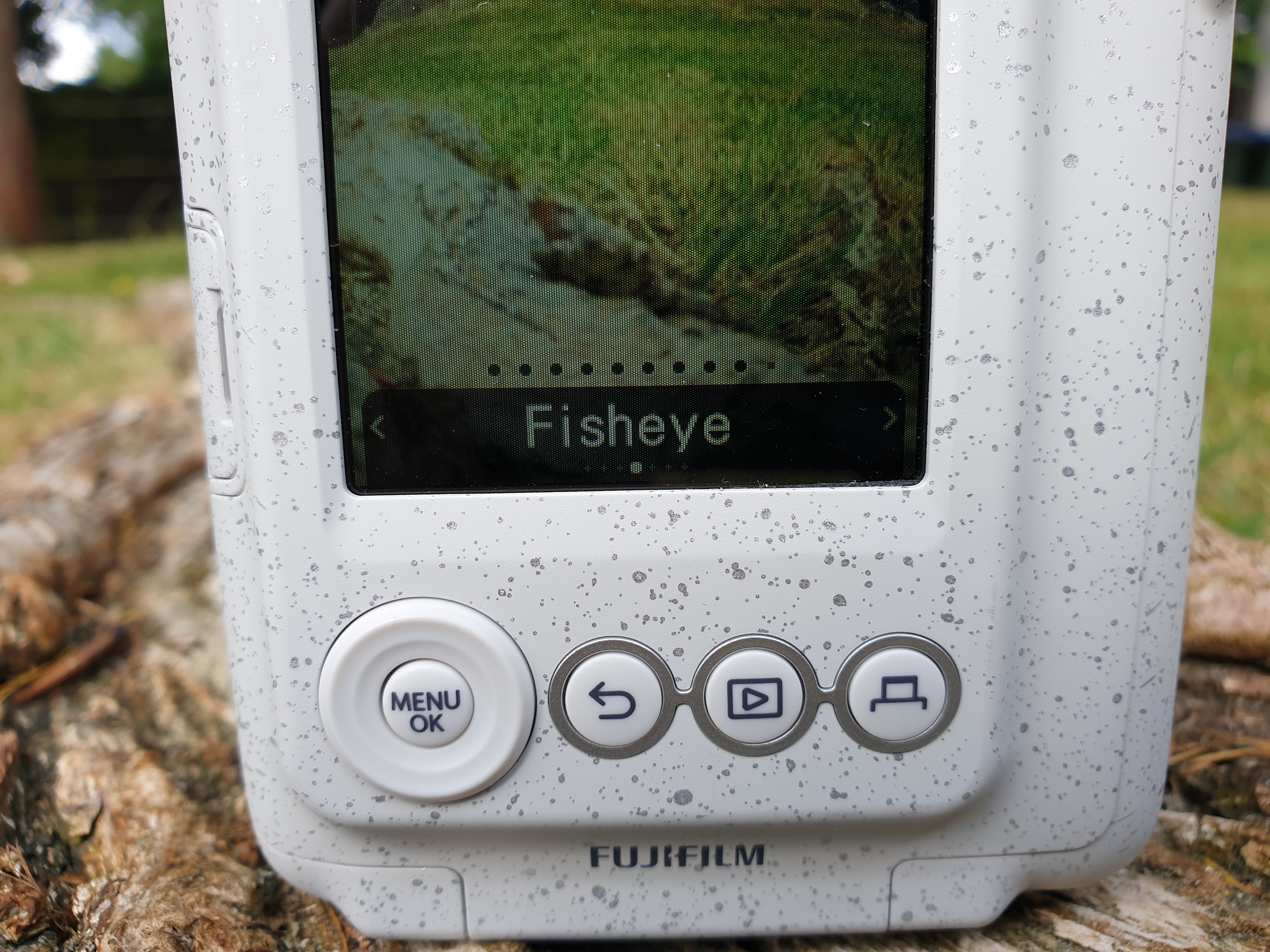 With no viewfinder, you have to use the LCD screen to line up your shots. It’s not particularly bright, which can make it hard to see outdoors, and its low resolution, and reliance on buttons instead of a touchscreen, reminds you that this is a fairly inexpensive camera – but what you see onscreen does largely line up with the finished print.

The interface is even more basic than the Instax SQ20, with just a selection of filters and frames to add to your photos. These filters stay applied between power cycles, so you’ve got to remember to turn them off unless you want your next shot to also have a fisheye effect, for example. It doesn’t have any way to shoot double exposures, create collages, pull an image from a short video clip or generally edit your saved photos – but it does gain audio recording. 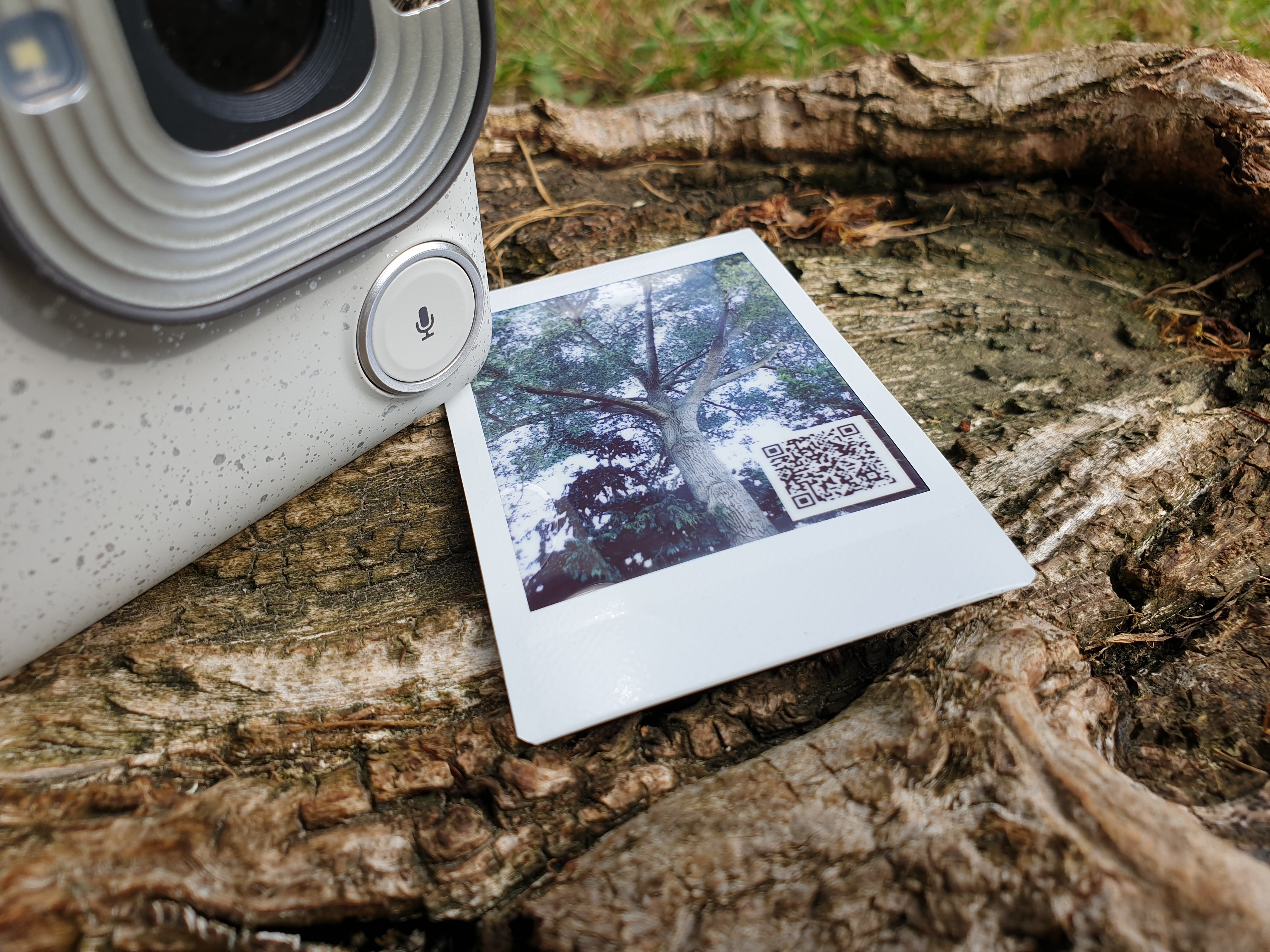 Before printing any photos with sound, you can pick which corner the QR code appears on, so as not to cover up a crucial part of the image – or place it dead centre to make it the focus of your shot

Press the microphone button on the front of the camera and the LiPlay captures 10 seconds of sound around the next photo you take, then embeds a QR code into the image that can be opened using any smartphone. The camera itself doesn’t have built-in Wi-Fi, so you’ll need to pair it to Fuji’s companion app for the sound to upload, otherwise the QR code link will just direct to an empty page.

The good news is the app is excellent, eclipsing even some of Fuji’s professional DSLR companion apps. It pairs quickly and automatically whenever you turn on the camera, lets you control the shutter remotely (complete with live view), set up the shortcut keys to automatically add a filter or sticker overlay to your photos, and print directly from your phone. In fact, that last function works so well that you might find you print more photos taken with your smartphone than you do from the camera itself.

Battery life is disappointingly low if you print off as many photos as you take. I saw between 25 and 30 shots before it ran out completely – although because you can snap as many photos as the internal memory (or a microSD card) has room for without having to print them all, you should still be able to last an entire day on a single charge.

If you only care about the quality of your printed images, the LiPlay doesn’t disappoint. Each credit card-sized Instax Mini print looked detailed and crisp than the much cheaper Fujifilm Instax Mini 9, which could be down the LiPlay’s superior glass lens, or the fact it is only exposing the paper to a digital sensor, rather than the entire scene. Certain digital filters look more impressive onscreen than they do when you print them off, with only marginal differences visible on the Instax paper

Instax photos deliver punchier colours than Zink ones, but do sometimes take things too far in terms of contrast, either losing clarity in the darker parts of a scene or washing out the brighter parts. The LiPlay is exactly the same, although you can tweak exposure compensation in the menus to adjust for it.

That means even this hybrid approach can become expensive while you learn its quirks: each photo costs around 75p, although this is admittedly the least expensive kind of Instax film. Otherwise well-lit shots can end up with a lack of detail once printed, as the Instax process tends to crush blacks and ramp up contrast – this can be used to your advantage to create more artful images

With only one autofocus point in the centre of the frame, you’ll need to lock focus then reframe your shot for an off-centre subject. There’s also no white balance or ISO controls in-camera, so certain lighting conditions can prove trickier here than in other hybrids. 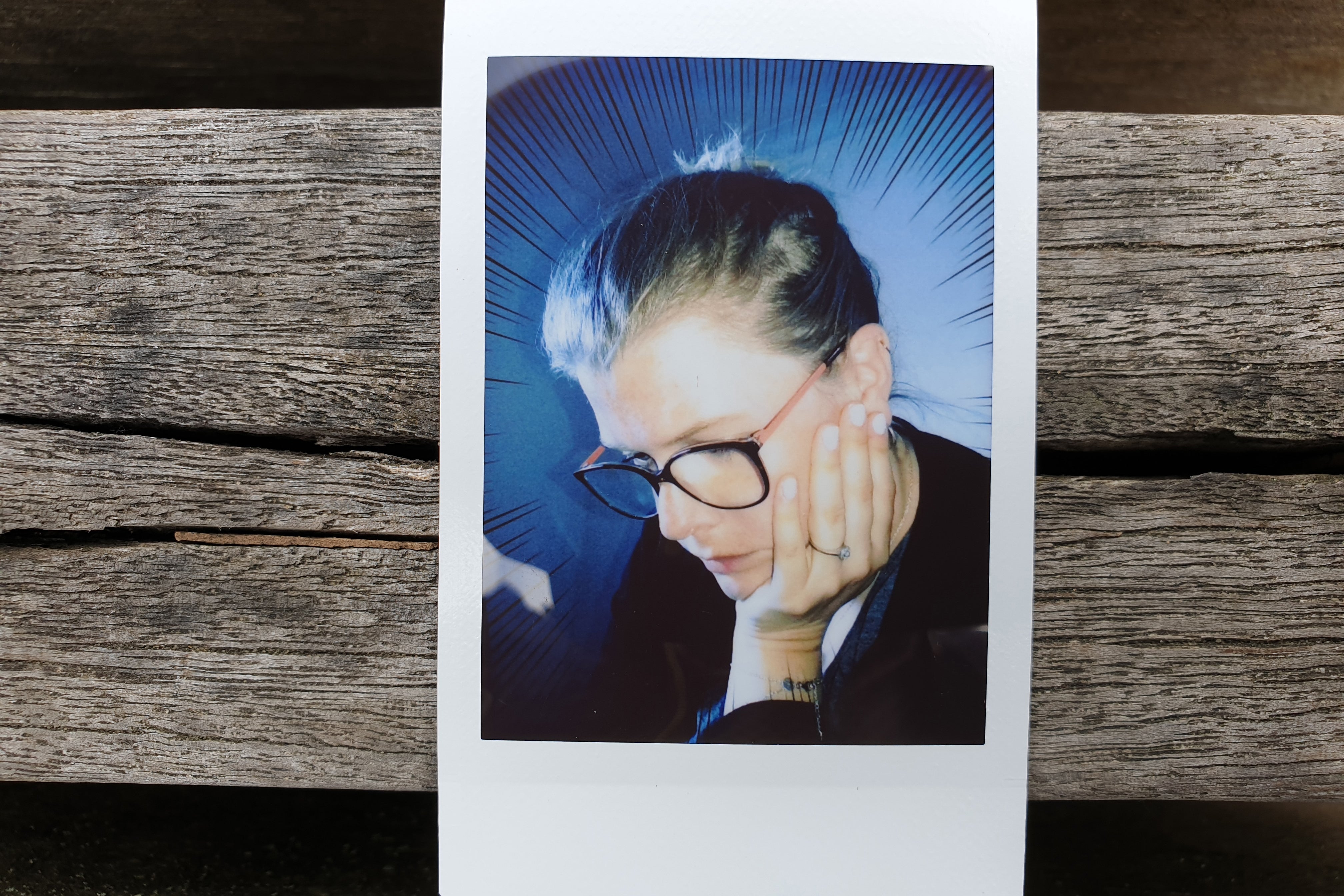 There are only a handful of digital frames and sticker overlays to choose from in-camera, but the smartphone app has more that can be rotated in and out as you please

There’s no easy way to get your digital photos off the camera’s built-in memory, as it doesn’t appear as a disk when hooked up to a PC and you can’t share them to a paired smartphone. Use an SD card (and card reader) and you’ll see results that are no better than you’d find on an entry-level smartphone. The small sensor also struggles with noise, especially in low light.

But to expect better would be to miss the point – digital snaps come a distant second to the Instax prints the LiPlay spits out.

Should I buy the Fujifilm Instax Mini LiPlay?

It isn’t quite the most compact hybrid camera out there, but the Mini LiPlay is as small as it gets for Instax film. This is the only way to get such vibrant colours and the authentic developing process of Instax in your pocket, while still keeping luxuries like an LCD screen and wireless printing from a smartphone. Even if the digital-first approach is kind of cheating. 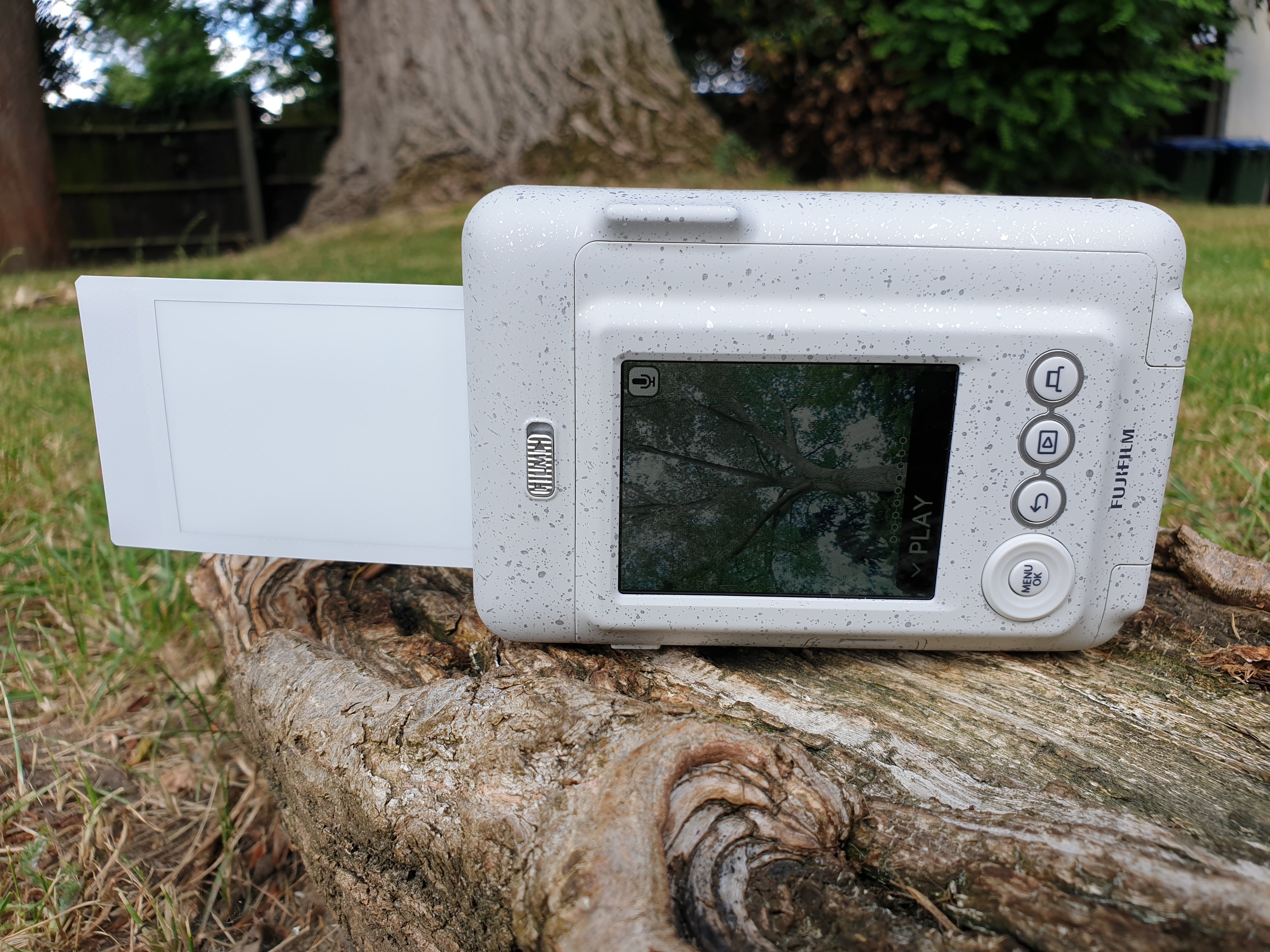 The Canon Zoemini S is even smaller still, but relies on a viewfinder rather than a screen, with no way to review your photos on the move. It also uses Zink zero-ink photo paper, which effectively prints your images rather than letting them develop like a true instant. Fuji’s own Instax SQ20 shoots on larger form at paper, but costs more and is far bulkier, making the LiPlay the smarter choice.