When electronic manufacturers in general, and camera manufacturers in particular, launch new models in any colour other than black, beige or silver, you know that somewhere along the line from drawing board to store shelf someone whose job title includes the word “marketing” has decided that they need to appeal to a particular type of consumer who they believe isn’t buying enough of their product. 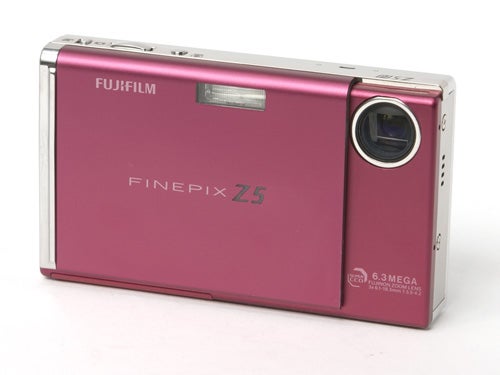 Therefore I have to wonder exactly which section of the community this new Fujifilm FinePix Z5fd is targeted at, because although it may be described as “Raspberry Red” in the brochure, they’re not fooling anyone with that. This camera is pink. Not just pink, in fact, but bright metallic semi-gloss fuchsia pink. After just using it for the past few days I’ve found myself considering a new career in hairdressing. I’ve even thought about buying a New Beetle.


In design as well as décor the Z5fd is born for the clubbing lifestyle. Measuring a trim 92.8 X 55 X 19.4mm and weighing only 148g it’s small and light enough to qualify as ultra-compact, and will slip unobtrusively into a handbag or shirt pocket. When not in use the lens is protected by a sliding cover that doubles as the on/off switch, so it’s not going to be easily damaged if it has a close encounter with your pink Motorola RAZR or the lighter for your menthol cigarettes.


Despite the number in its name, the Z5fd is a 6.3-megapixel model featuring Fuji’s SuperCCD HR sensor, with an internal 3x zoom lens and a high-resolution 230k pixel 2.5-in LCD monitor. It is available in a slightly more butch silver or a positively macho “mocha brown” as well as the eye-catching colour of my test sample. 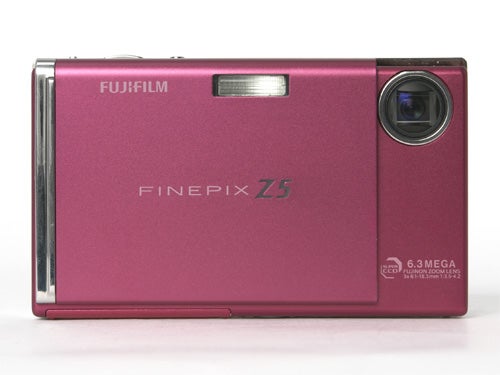 The build quality is up to Fuji’s usual high standard, with a strong aluminium body that feels reassuringly solid despite the camera’s low weight. The sliding cover operates smoothly, although it is a little bit too loose for my liking. I found it sometimes came open in my pocket. The lens doesn’t protrude from the body at all, but it is in a very exposed position when the cover is open, and the front element is prone to getting smeared with greasy finger marks if you grab the camera from the wrong end. Since the camera has a very symmetrical shape this is easily done. 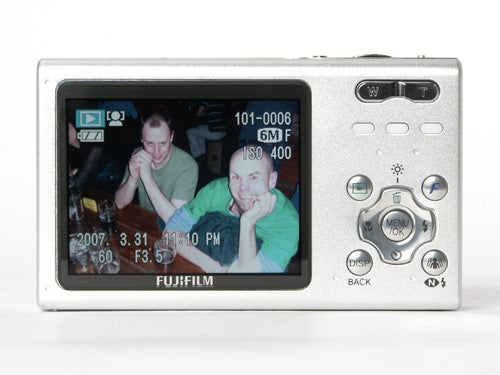 Apart from this minor quibble I found that the camera handled very well. There is a slight raised edge on the sliding panel which serves as a finger grip when it is open, and the rear panel controls are arranged so as to leave plenty of room for your thumb, with the zoom control sensibly located for quick and easy use. The shutter button is quite small, and is flanked by the button to activate the face detection mode and the slider switch to select movie mode, but in practice it falls neatly under the trigger finger. It is a bit over-sensitive though, and on a night out in a busy pub I did accidentally take one or two shots of my shoes or the ceiling, although after a few pints this was a fairly accurate description of my state of mind.


The Z5fd is a simple snapshot camera, and its feature set reflects this. It has a “manual” mode, which allows the user to adjust ISO, exposure compensation, white balance and AF mode, and an “auto” mode, in which these adjustments are disabled and only continuous shooting mode, colour mode and picture quality can be changed. As well as these, there are 16 scene modes, including a “natural light” mode that selects higher ISO, and all the usual modes such as portrait, landscape, sports, night scene, fireworks, sunset, snow etc. As the “fd” in the name indicates, it also has a face detection mode, but like most such systems it is not completely reliable, and really only works when the subject is not more than a few metres away and is looking straight and level at the camera. Things like dark sunglasses, partial face coverings, large beards and some hats will confuse it. 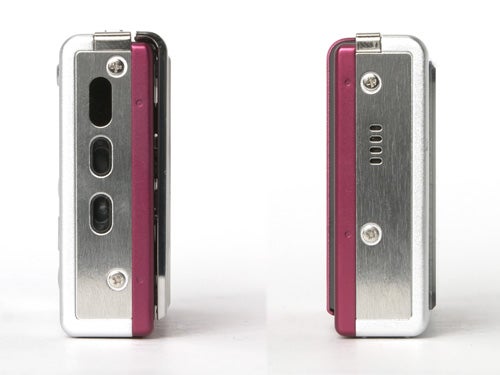 In terms of overall performance, the Z5fd starts up in around 1.8 seconds when the cover is opened, and shuts down almost instantly when it is closed. Like most Fuji cameras it has three continuous shooting modes; two burst modes that fire at two frames a second but only record either the first three of last three frames, and a long-period setting that can shoot until the card is full but at a rate of one frame every 1.7 seconds. This might sound slow but it does check focus for every shot, although the flash is automatically deactivated. In normal single-shot mode the camera can take a shot about once every two seconds, or once every three to four seconds if the flash is used.

One concern is battery duration. The Z5fd is powered by a relatively small 750mAh Li-ion battery, for which Fujifilm makes no particular claim, but I found that I was only able to take 145 shots, about half with flash, before it ran out. However this was on its first charge, and Li-ion batteries do improve their performance a little after a few charge cycles. 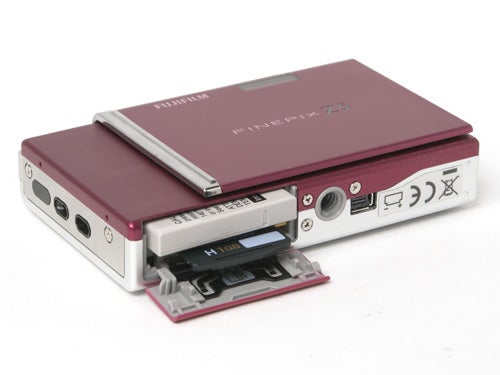 Focusing is extremely quick even in very low light. It had no problem coping with a dimly lit nightclub for instance. The Z5fd has no AF assist lamp, so it can’t focus in total darkness, but it performs better in low light than many cameras I’ve tested recently. Like most of the latest Fujifilm cameras the Z5fd has extremely good high ISO performance, producing excellent picture quality right up to 800 ISO, and acceptable quality at its maximum setting of 1600, so shooting in low light without the flash is at least possible if not really recommended. 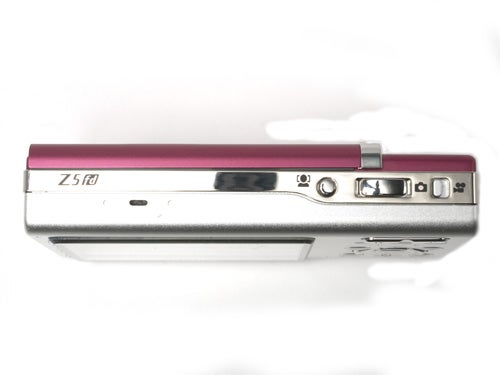 Although it is clearly designed for social snapshot photography, the Z5fd acquits itself well shooting normal photographs in daylight as well; in fact I can only describe the picture quality as outstanding. Despite its size the lens performs brilliantly as long as it’s kept clean, with minimal distortion or chromatic aberration, and even the usual Fuji bugbear of purple fringing is almost completely absent. The level of detail is excellent for a 6MPcamera.Colours reproduction is rich and vibrant, and thanks to 256-zone metering exposure is seldom less than perfect even when shooting in awkward lighting situations. It’s just a pity that it’s hardly ever likely to be used for the kind of photographs of which it is capable.

Proving that you should never judge a book by its cover, the party-oriented Fujifilm FinePix Z5fd is a very accomplished little camera, capable of producing excellent results both indoors and out in a wide range of lighting conditions, as long as you keep your grubby fingers clear of the lens. It is stylish, well made, performs and handles well, and is very easy to use. The only real issue is the limited battery life, but if as long as you keep it charged up this shouldn’t be a problem. 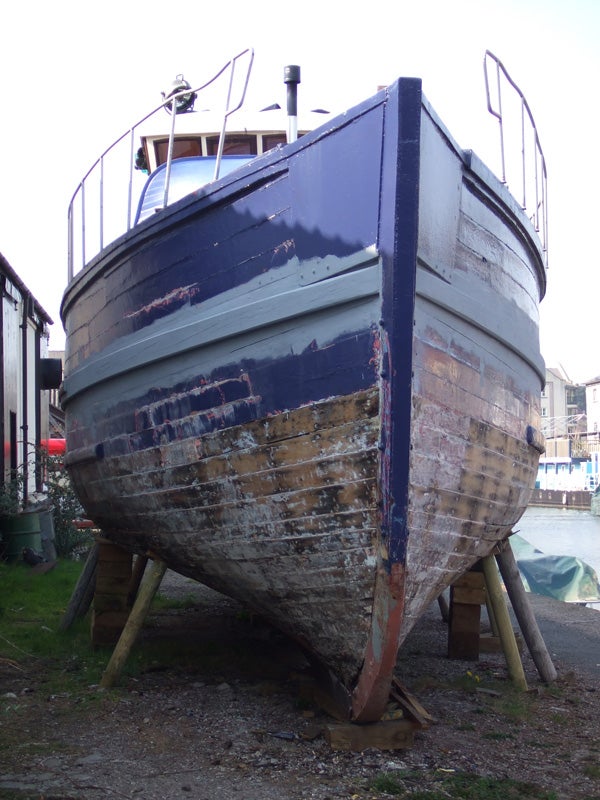 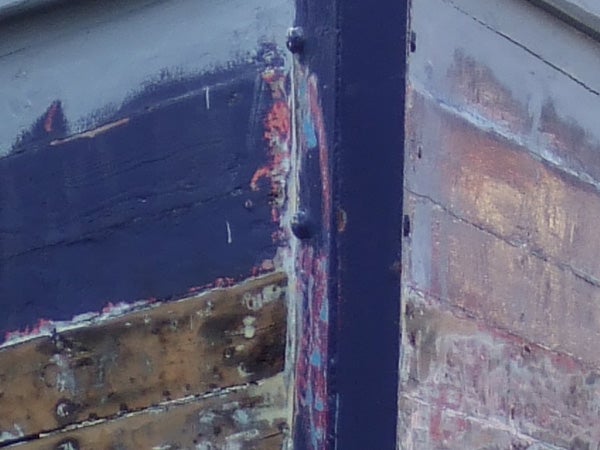 At the minimum sensitivity of 100 ISO, the image quality is excellent. 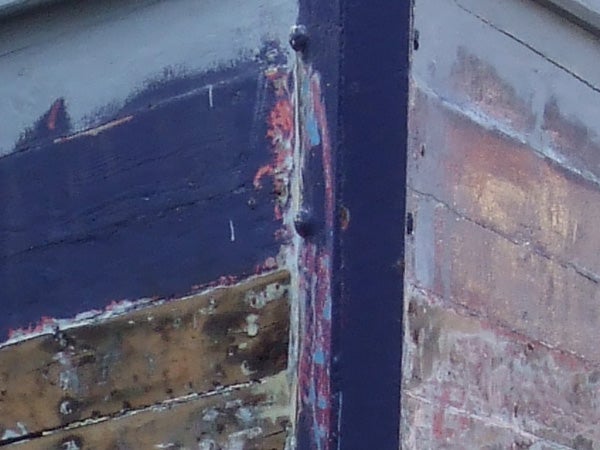 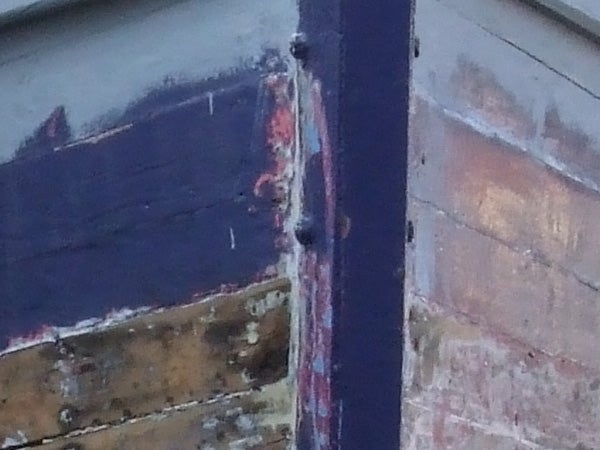 400 ISO and there is the slight hint of some mid-tone colour distortion, but only if you look really hard. 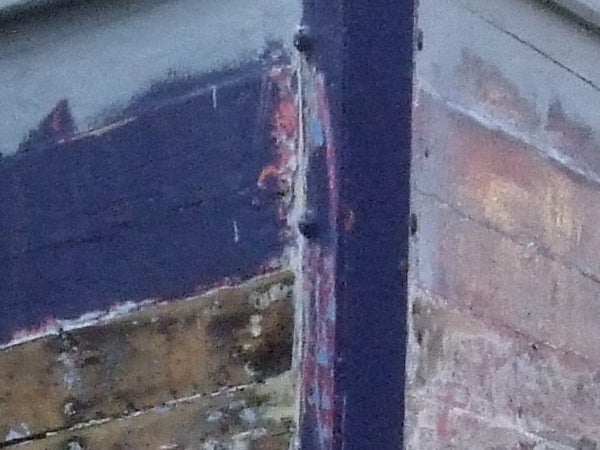 At 800 ISO the noise reduction really kicks in, reducing some fine detail to keep the image largely noise free. 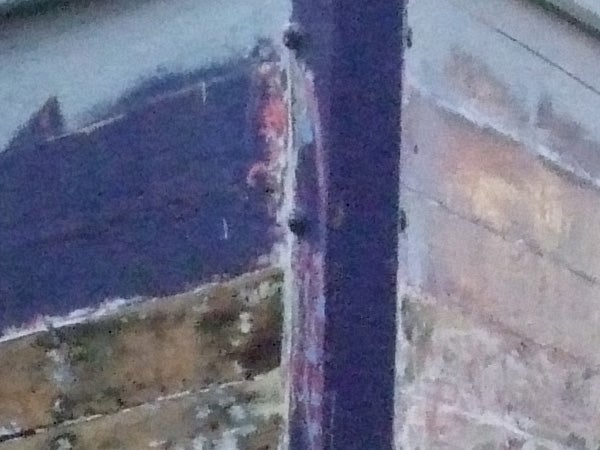 At 1600 ISO more detail has been lost, but colour and exposure are still accurate.

”A range of test shots are shown over the next two pages. Here, the full size image has been reduced for bandwidth purposes, and in some case a crop taken from the original full resolution image has been placed below it in order for you to gain an appreciation of the overall quality.


Full-sized versions of some of the following images can be downloaded by clicking on the sample shots as indicated. However be aware that the average file size is around 3.0 MB, so those on very slow connections will experience some delay.” 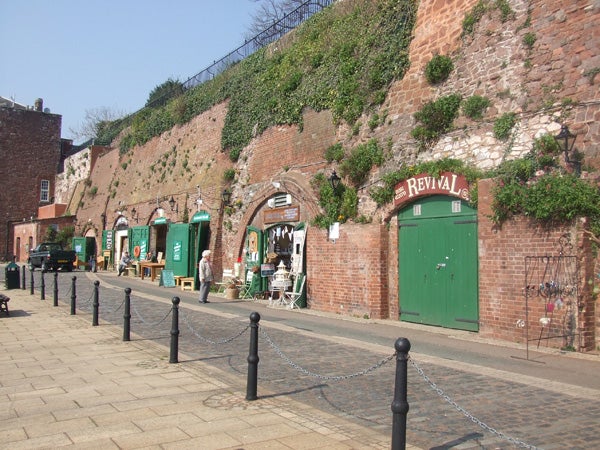 The Z5fd has a very nice lens, despite its diminutive size. This wide-angle shot has excellent detail and corner sharpness. Focal length is equivalent to 36mm. 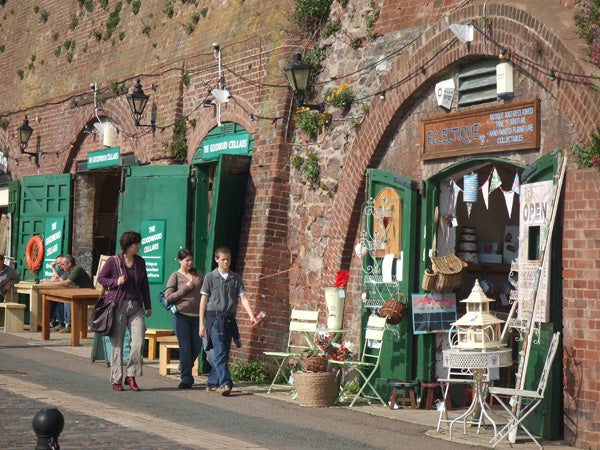 Taken from the same position as the shot above, this shows the effect of the telephoto end of the zoom, equivalent to 108mm. 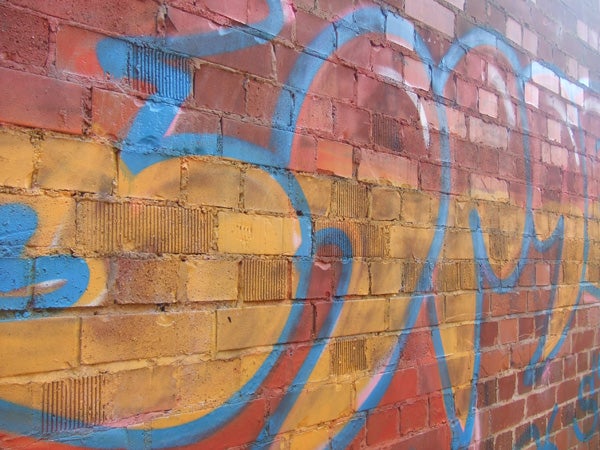 There was a little bit of dirt on the lens for this shot, which has caused the slight mistiness in the top right corner, but other than that the exposure, colour and level of detail are superb. 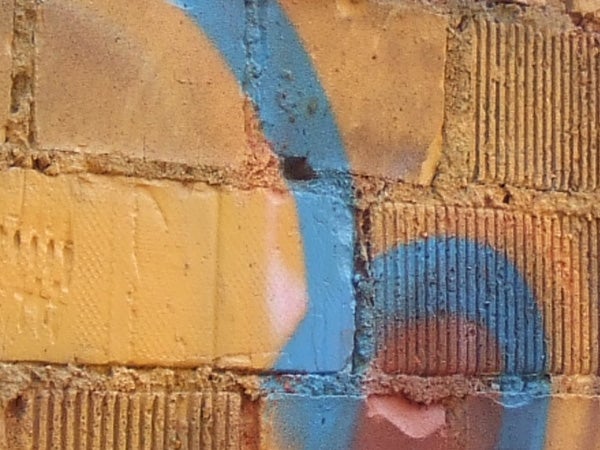 This is a full-sized crop of the centre of the image above, showing the high level of detail. 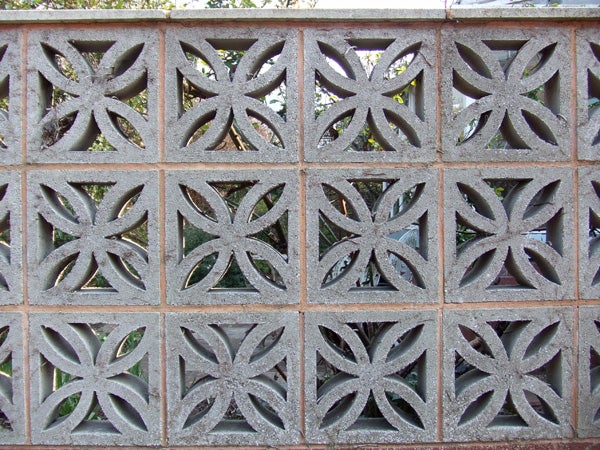 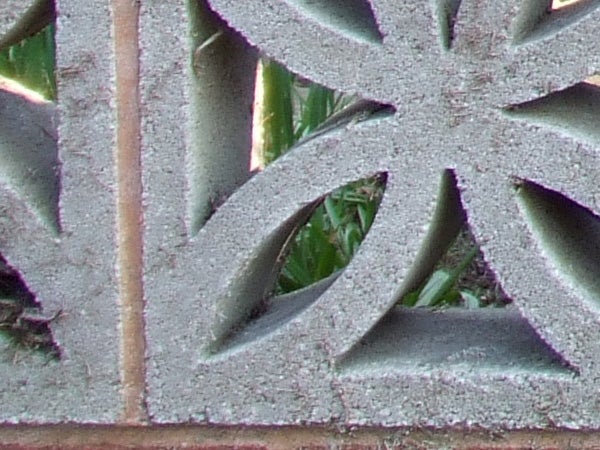 This is a full-scale crop from the bottom left corner of the image above, showing good corner sharpness and minimal chromatic aberration, although some slight purple fringing is visible. 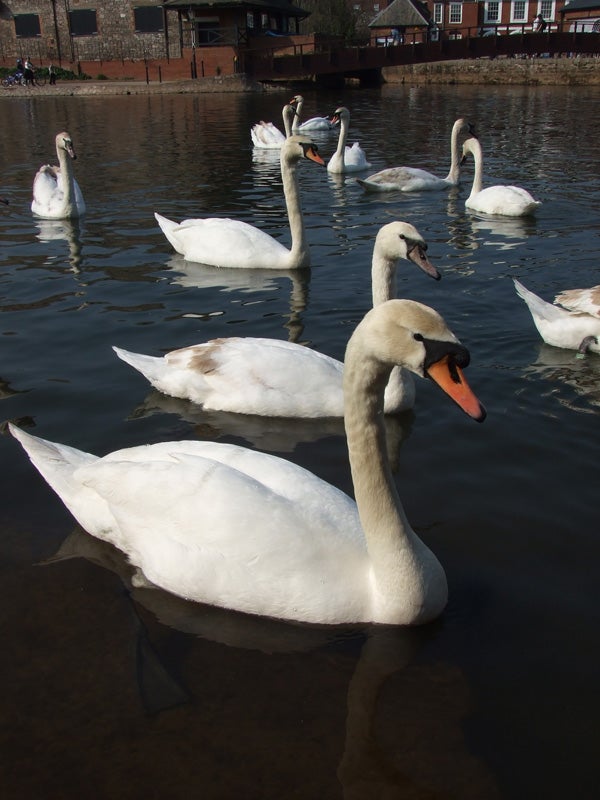 This shot shows just what superb quality the Z5fd can produce. The exposure is perfect, and the focus precisely accurate. 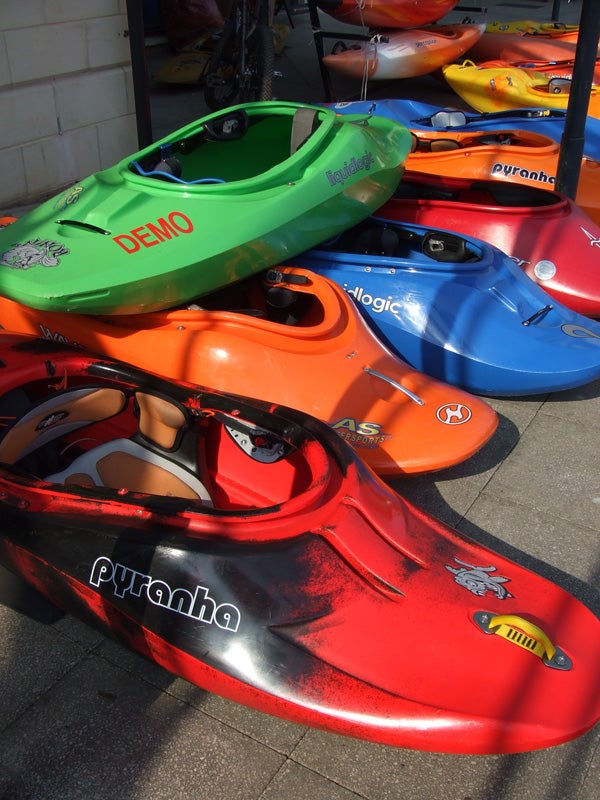 In normal colour mode the colours are rich and bright… 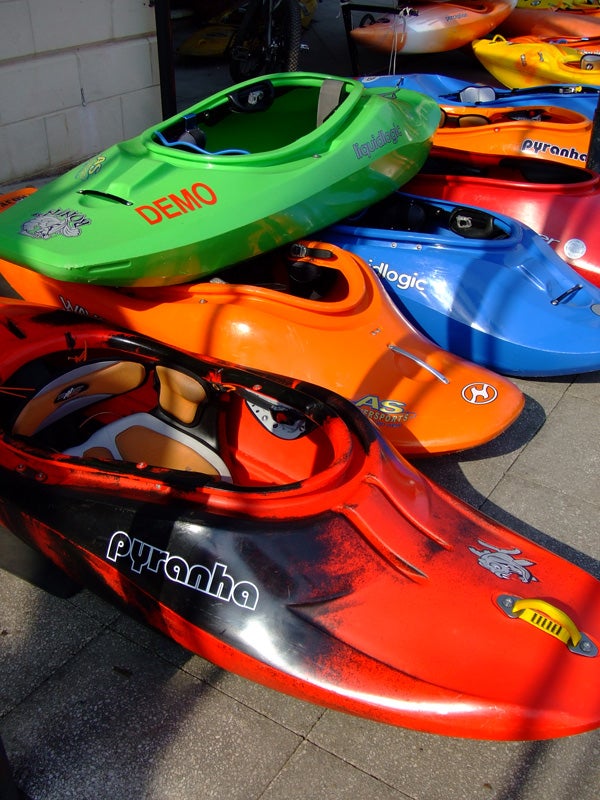 …while in vivid mode they almost leap off the screen. 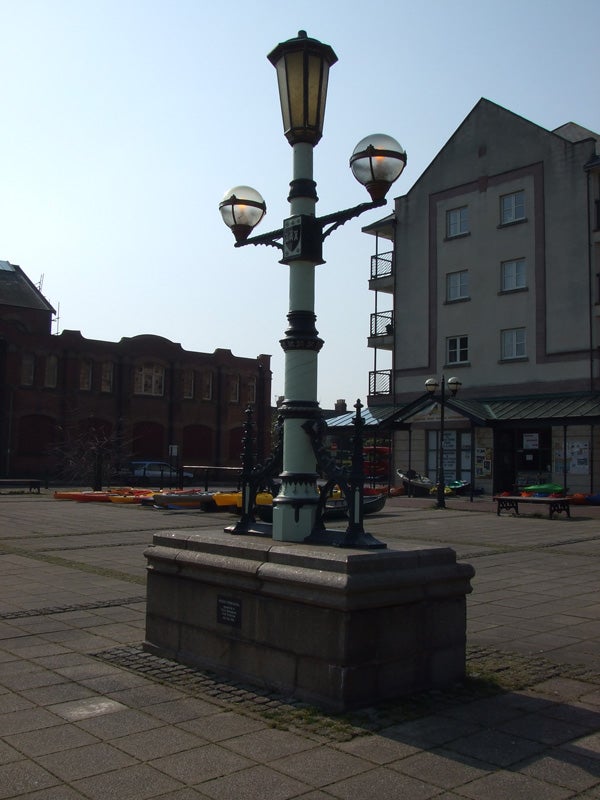 Even shooting into the sunlight the excellent exposure system and SuperCCD HR sensor has managed to capture both highlight and shadow detail in this tricky shot. 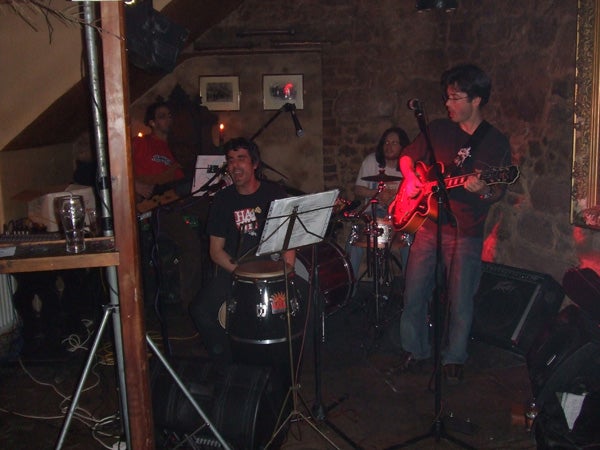 The flash isn’t the most powerful thing you’ve ever seen, but at least the frame coverage is good.