If you’re looking for a stylish but ultra-compact digital camera, the decision is going to be a hard one because you’ve got plenty to choose from. All of the major manufacturers have entire ranges with dozens of highly desirable premium-priced cameras featuring cutting edge technology and fashionable design. Canon has its Digital IXUS range; Nikon its Coolpix S series; Sony is represented by the Cyber-shot T series, and Samsung has both its NV range and its new i-series models. For Fujifilm its premium style range is the FinePix Z-series, and one of the latest is this, the Z100fd. 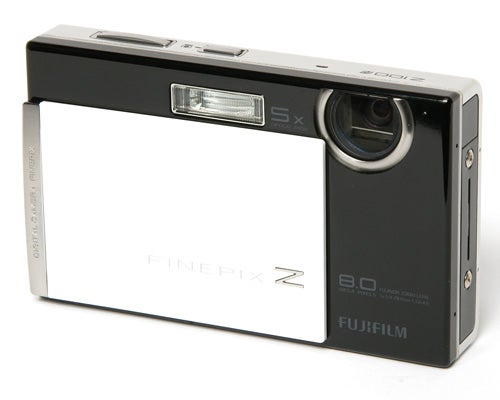 The Z100fd is an 8-megapixel ultra-compact camera featuring a 2.7-inch 230k monitor, 5x zoom internal lens (equivalent to 36-180mm) and moving-sensor mechanical image stabilisation. At just 19.8mm thick it is one of the slimmest cameras on the market to feature this technology. Like most style-oriented compact cameras the Z100fd isn’t cheap. It is currently selling for around £160-£170, but this looks a lot more reasonable when you compare it to similarly-specced models from other manufacturers, such as the Canon IXUS 860 IS (£210), the Panasonic Lumix FX-55 (£225), the Olympus mju 830 (£185) and the Sony Cyber-shot DSC-T200 (anywhere between £210 and £320). 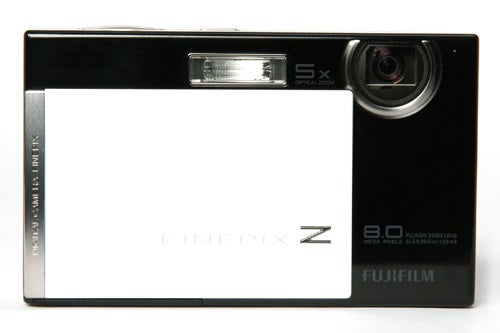 The external design of the Z100fd is certainly distinctive, although it seems to have been designed more for its aesthetic appeal than ease of handling. It has a manually-operated sliding cover over the lens and flash, which is nothing new, but just to be different this one slides diagonally, and the ‘Z’ logo lights up for a few seconds when the camera is activated. The body is all metal, and comes in a range of colours, including “Shell pink”, “Satin silver”, “Cappuccino brown” and the colour scheme of my review sample “Tuxedo black”, which has a contrasting white cover. The other three have a brushed-metal finish, but I found that the glossy enamel finish of my review sample was quite slippery to hold and showed up fingermarks very easily. The lens is positioned very close to the top edge of the body, and the glass covering the front element is almost flush with the front surface of the camera, and I found that care had to be taken to avoid smearing fingermarks over this as well, resulting in blurred pictures. Despite this quibble, the build quality is excellent, and the camera feels solidly expensive. Even the tripod bush is metal, which is unusual enough to be worth mentioning.

The position of the controls on the back is also laid out for visual symmetry rather than convenience, and I found that the camera was hard to grip without my thumb occasionally pressing the ‘up’ direction on the D-pad, accidentally switching off the image stabilisation. The pad could easily have been positioned much lower, leaving room for a thumbgrip that would have improved the camera’s handling, but then it wouldn’t look as nice. The zoom control is symmetrical with the two buttons at the bottom of the control area, and these too are designed for visual appeal rather than function, which unfortunately means that the zoom control is very small and fiddly. Fuji has dispensed with the usual “F” button menu, and instead has put all of the camera’s main shooting modes and 16 scene modes on one big 22-entry rotary menu controlled by the rotating D-pad, and the main camera options menu is selected as one of these options. This is something that you’ll either love or hate; personally I found it tiresome having to go through seven button presses just to get to exposure compensation or ISO setting. Since the Z100fd is very much a point-and shoot camera, the range of menu options is fairly limited. ISO, white balance, drive mode and image quality are adjustable, but the only image adjustments are monochrome or the usual high-saturation “chrome” mode. 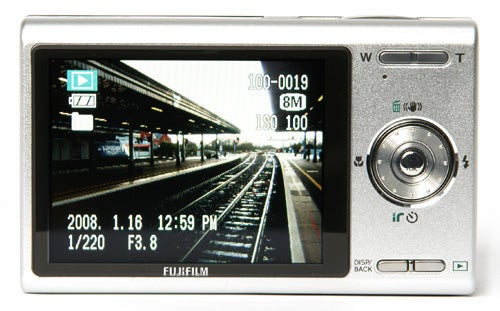 While the shooting modes may be limited, the Z100fd’s range of clever tricks is extensive. As well as the now-obligatory face detection portrait mode, and the less-common but not unique automatic face-detection-based red-eye correction function, it also has an infra-red communication system called IrSimple, which allows pictures to be transferred wirelessly between the Z100fd and any other camera or device that is also equipped with IrSimple or the earlier IrDA system. Infrared communication is used on a number of mobile phones and some older laptops, but I can’t help thinking that the radio-based Bluetooth would probably have been a more sensible option for wireless file sharing. One sensible option however is the dual-format memory card slot, which can accept SD, SDHC and xD-Picture cards. 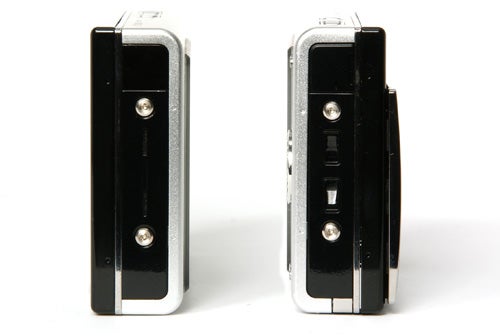 The actual photographic features are also useful. Obviously the mechanical image stabilisation is a major selling point, and it is a very effective system, allowing stable hand-held shots at shutter speeds as low as 1/15th of a second. The face detection system works well too, although it suffers from the usual limitation that subject faces have to be looking straight at the camera, and unobscured by such things as pints of beer, broad-brimmed hats, beards or large sunglasses. The scene modes include a fairly nifty auction mode which can composite up to four shots into a single 640 x 480 image, ideal if you get the sudden urge to sell something on eBay. The natural light mode, also seen on some other Fuji compacts, takes two photos in rapid succession, one with and one without the flash. The flash itself has Fuji’s Intelligent Flash System, which balances the flash output to the ambient light even at close range, resulting in pleasant fill-in flash in daylight, or balanced night portraits.

The camera’s performance is, unfortunately, a bit of a weak point. It takes three seconds to start up, which is a bit slow by comparison to other high-spec compacts. Shot-to-shot time is also rather sluggish at an average of three seconds in both single-shot mode and in long-period continuous mode. It also has top-three and final-three continuous modes which can manage 1.4 frames per second. When using the flash, the shot-to-shot time is around eight seconds, which is a also slower than average. The AF system however is very good, focusing quickly and accurately on virtually any target even in very low light conditions, despite the camera not having an AF assist lamp. One major concern though is battery duration. The camera is powered by a 740mAh Lithium-ion rechargeable battery of a type used in a number of similar cameras. However in the Z100fd it has to power a lot of technology, and I found that on a full charge I was only able to take just over 100 shots, about a quarter of them with the flash, before it ran out of juice. This was with a brand new battery, and Li-ion batteries do improve slightly after a few charge cycles, but even allowing for this, it is still a very poor performance.

Fortunately, the Z100fd does have the saving grace of reasonably good image quality, although it isn’t perfect. Despite its unusual zoom range and configuration, the lens produces a virtually zero distortion and good corner sharpness with a minimum of chromatic aberration, although it has to be said that the overall level of detail could be higher. The Z100fd has a conventional 1/2.5-inch CCD rather than Fuji’s more sophisticated SuperCCD, and so it doesn’t have the high-ISO capabilities of cameras such as the F40fd. The noise reduction system is a bit heavy-handed and images look over-processed from 200 ISO upwards, and although the level of detail and colour balance remains usable up to 800 ISO, there is visible noise in the mid-tone areas even at 200 ISO. High contrast edges in many shots also show that traditional Fujifilm problem of purple fringing. Despite these problems, the Z100fd is capable of taking good snapshot photographs in most social situations, and will look cool and stylish while doing so. 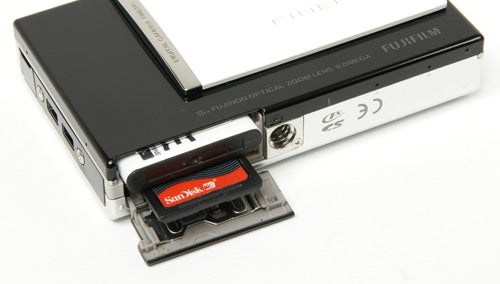 As style-conscious snapshot cameras go, the Fujifilm FinePix Z100fd offers a lot of advanced features for a lot less money than most of its competitors. The 5x zoom range, mechanical image stabilisation and ultra-compact size combined with its good low-light focusing and good flash exposure system make it an ideal social snapshot camera, while its bold appearance is sure to draw admiring looks. Its performance is quite slow however, and the very limited battery life is a big disadvantage. 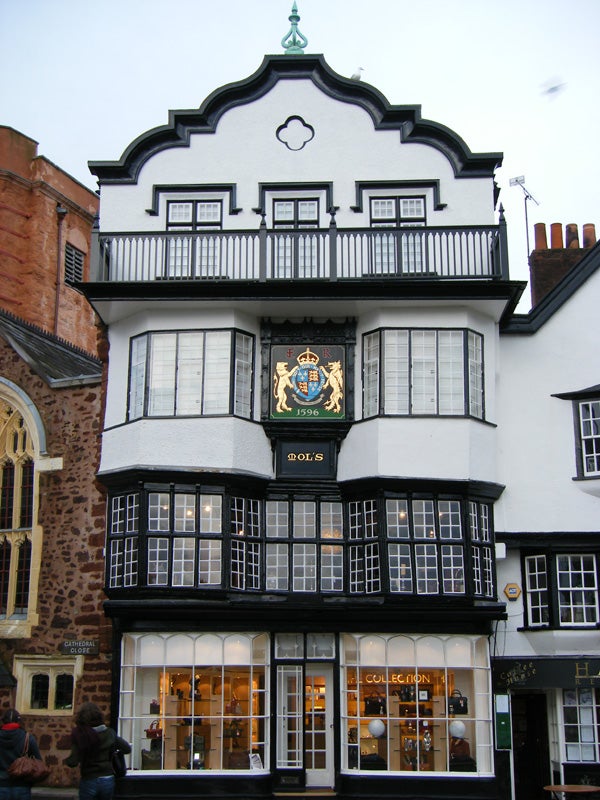 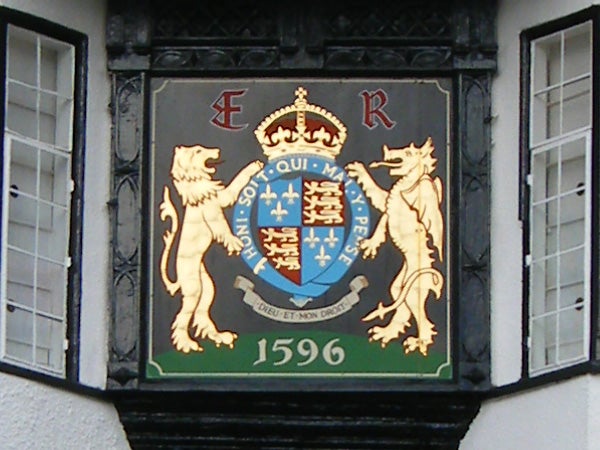 64 ISO, no image noise but the image could be a bit sharper. 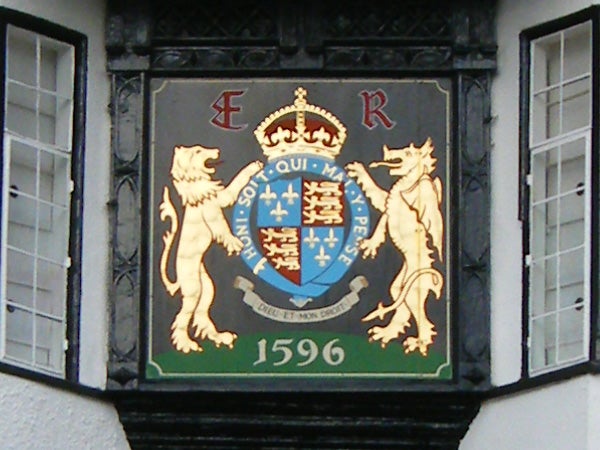 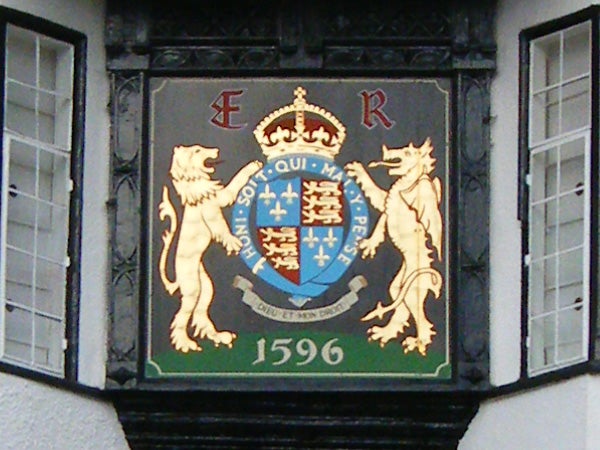 There is a bit of mid-range noise at 200 ISO, but image quality is still pretty good. 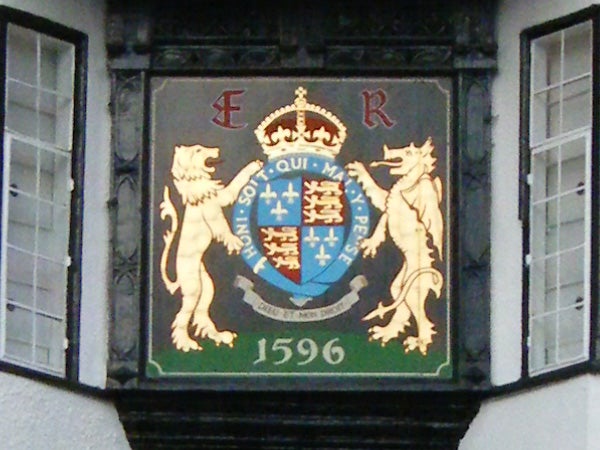 400 ISO isn’t much worse, and the picture would print well. 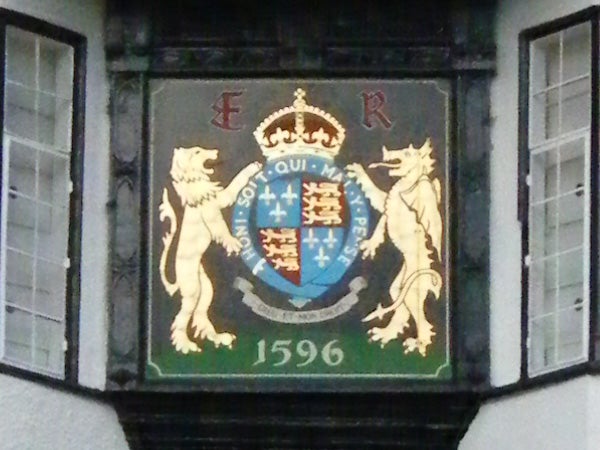 The noise reduction has scrubbed out a lot of fine detail at 800 ISO. 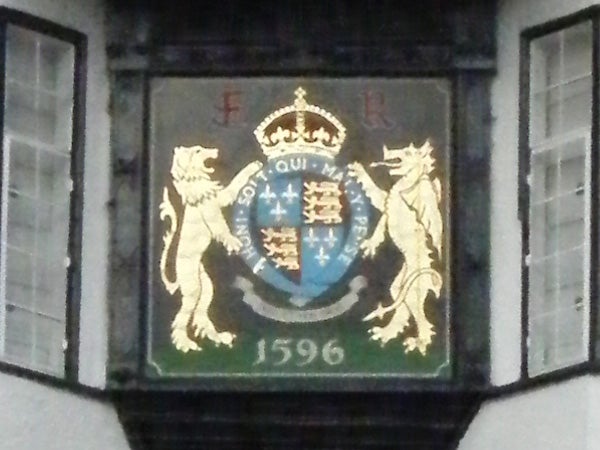 Image quality at 1600 ISO is quite poor, but the colours are still clear. 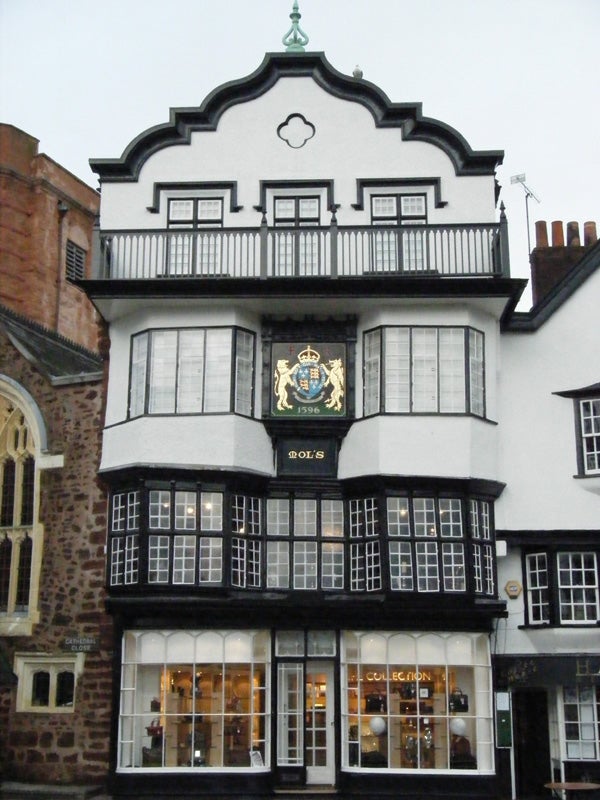 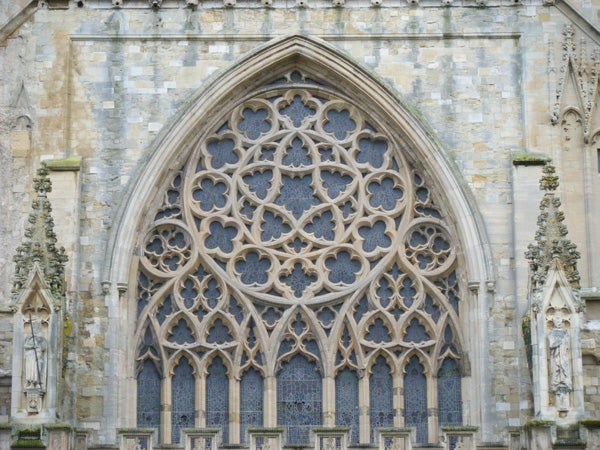 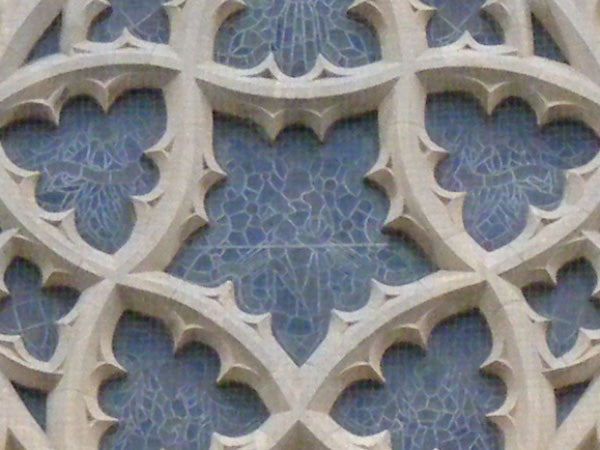 The level of detail isn’t great even for 8MP, but this was shot on auto ISO at 400. 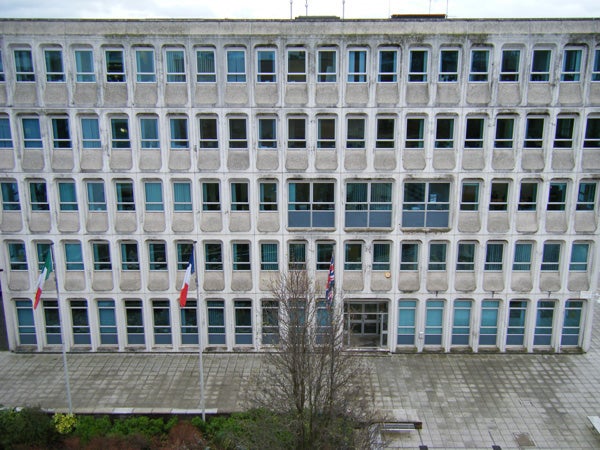 The lens produces virtually zero barrel distortion at wide angle. The next two images are partial crops from this frame. 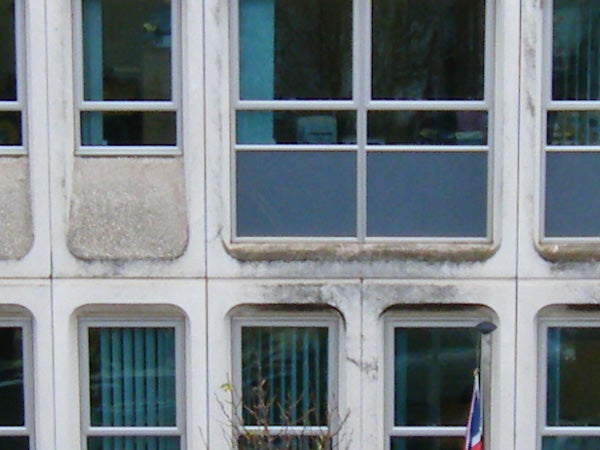 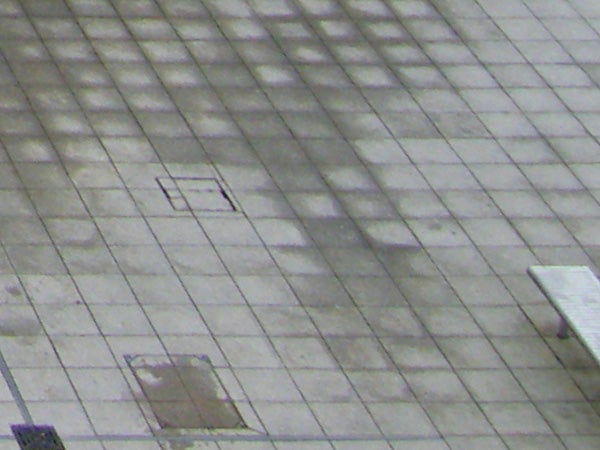 Corner sharpness is also good, but there is a little chromatic aberration. 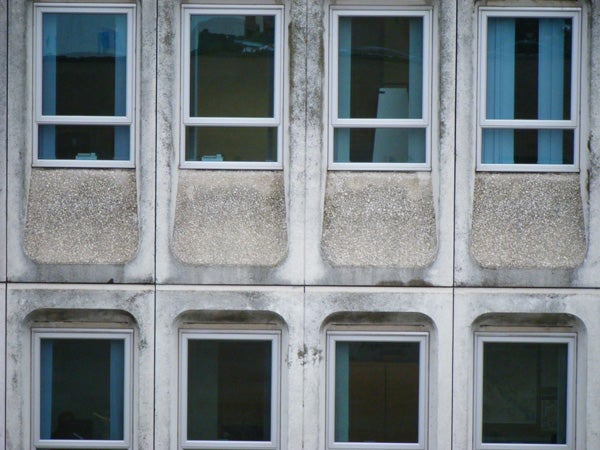 No pincushion distortion at the telephoto end. 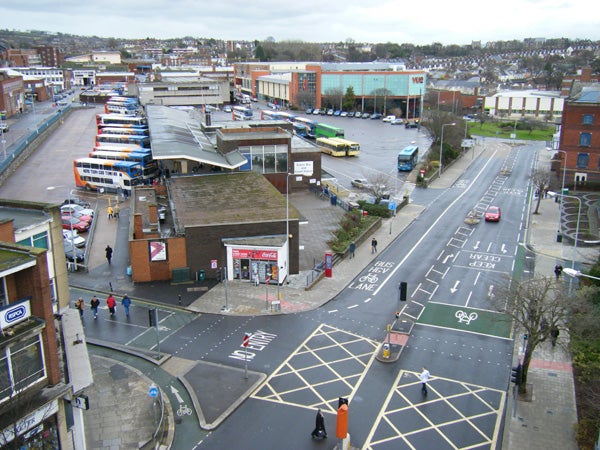 This was taken at the wide-angle end of the zoom, equivalent to 36mm. 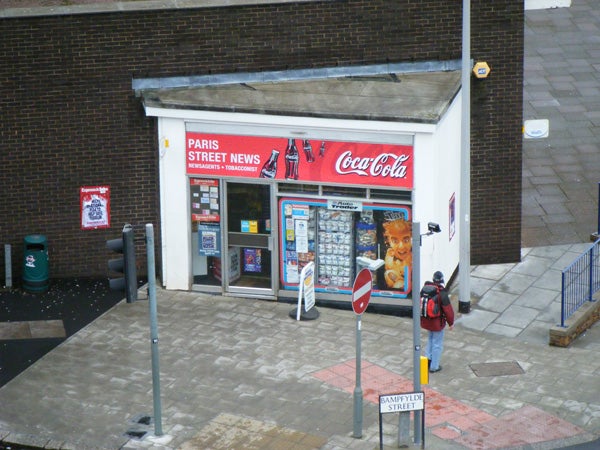 The telephoto end of the 5x zoom is equivalent to 180mm. 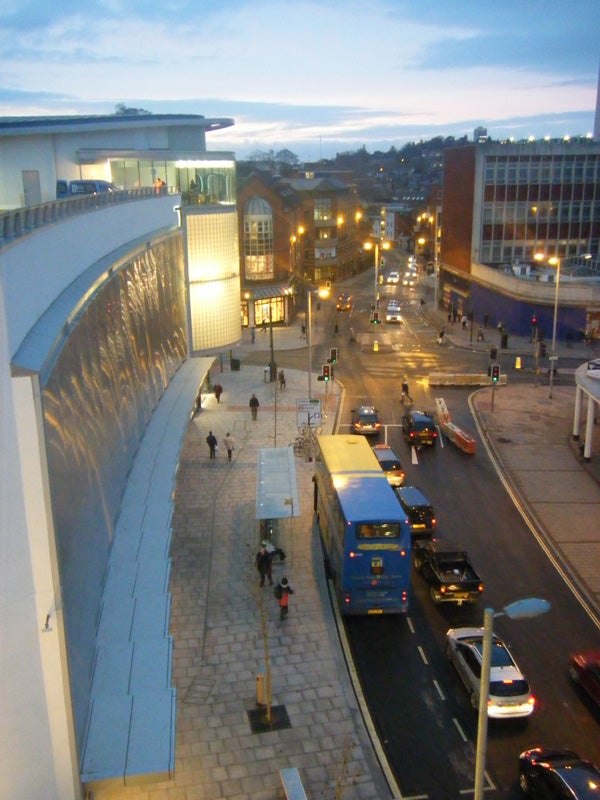 Colour reproduction is good, but I think the lens was a bit dirty for this shot, a permanent hazard given its position. 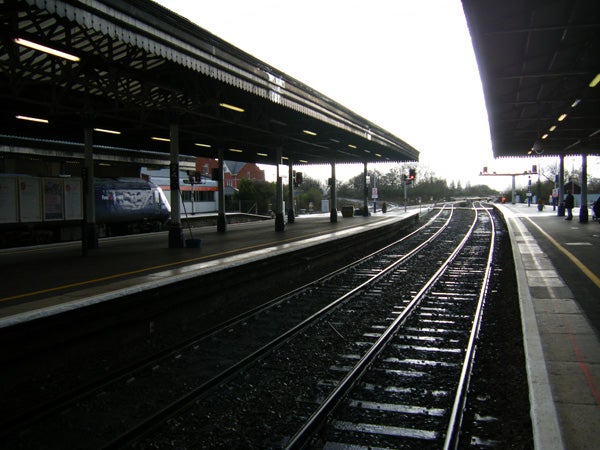 This high-contrast shot shows purple fringing along the dark edges. 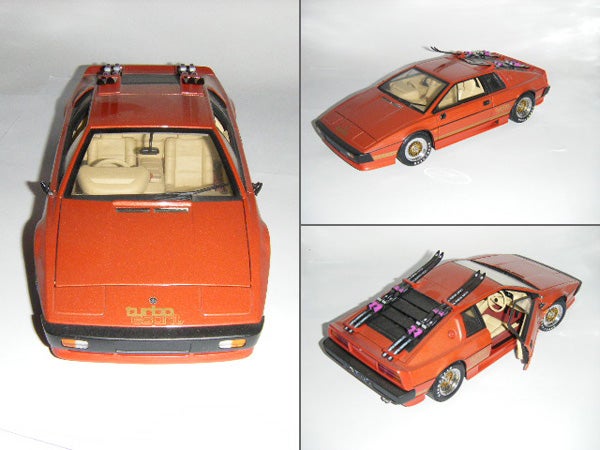 The Auction mode produces a composite shot ideal for websites such as eBay.