There are a lot of budget-priced cameras on the market; you see them in supermarkets and mail-order catalogues all the time, and if you’re sensible you’ll avoid them, or at least the vast majority of them. Most of them are cheap plastic tat, manufactured in some anonymous Chinese factory and imported under any one of half-a-dozen brand names. However there are a couple of exceptions: some of the big-name manufacturers also have budget-priced ranges to cater to the supermarket and catalogue trade, and one or two of these cameras are not too bad. 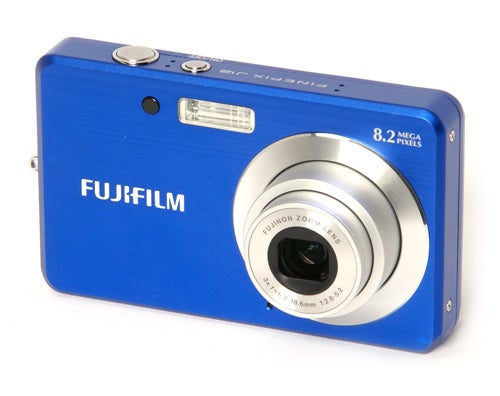 One such manufacturer is Fujifilm, which along with its professional DSLRs, feature-packed super-zoom bridge cameras and advanced compacts also has its J-series of stripped-down, cut-priced compact cameras. The last one I looked at was the FinePix J10, back in May of last year. The J10 is still available, but Fujifilm has nonetheless launched the J12, which I’m looking at today.


The J12 is very similar to the J10 in many ways. It is exactly the same weight and virtually the same size. As far as I can tell it shares exactly the same body, although according to the spec sheet the J12 is actually 3mm thicker. Unfortunately I don’t have the J10 around for a direct comparison, so I’ll have to take their word for it. 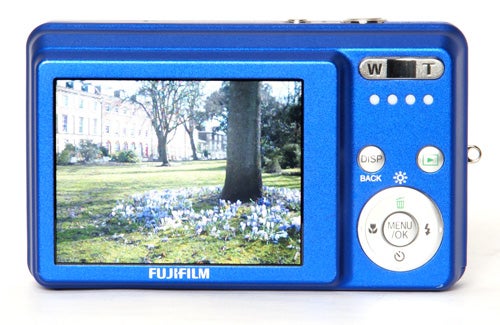 For such a cheap camera the J12 is surprisingly well made, and certainly looks more expensive than it actually is. The body is all aluminium, and feels solid and reasonably robust. It is available in two colours, either the metallic blue shown here, or a bright metallic pink. It only has the bare minimum of controls, but they are sensibly laid out and despite its small size the camera handles reasonably well. Some sort of textured thumb-grip area would be an improvement, but would probably push the price up by 12p.

Like the J10, the J12 is an incredibly simple camera with a very basic specification. It has a 1/2.5-inch 8.2MP sensor, a 3x zoom lens with a focal length range equivalent to 38-113mm, and a rather small (by current standards) 2.5-inch LCD monitor with a fairly restricted viewing angle and a resolution of only 114k dots. It has none of the advanced features that we’ve come to take for granted, such as image stabilisation, contrast enhancement or face detection, or even basic things like a choice of metering modes or autofocus options. It practically goes without saying that of course it has no manual exposure or focusing functions. 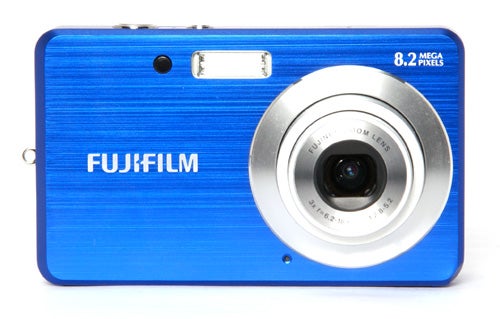 User control is limited to a few simple menu options, including white balance, ISO setting, exposure compensation and burst mode. It doesn’t even have a proper continuous shooting mode, offering instead a simple three-shot burst. However at least the menu system and the D-pad used to navigate it are less fiddly than on the previous model, and operate smoothly. 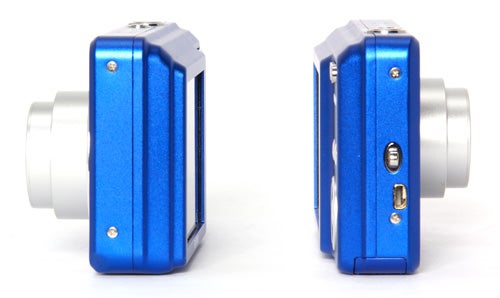 There’s not much else I can say about this camera that wasn’t already covered in my review of the J10. The zoom control is still a rocker switch and is still stepped, with six increments between minimum and maximum. Like most recent Fujifilm cameras it has a multi-purpose card slot that can take SD/SDHC as well as xD-Picture cards.

The similarities between the J12 and J10 extend to the camera’s overall performance. It starts up quickly in around 1.6 seconds, and shuts down again in about the same. Shot-to-shot time is a little over two seconds, which is fairly respectable for a cheap camera. The three-shot burst mode however is quite slow, at over a second per shot.

Naturally if you’re only prepared to pay £70 for a camera you shouldn’t expect miracles, and the J12 does have a couple of major weak spots. The first is the autofocus system, which is patchy at best. It’s only the second camera I’ve ever seen that wouldn’t immediately focus on my Cathedral-window test shot. It actually too three or four tries to lock on to this well-lit, high-contrast subject. It also doesn’t work well in low light, and lacks an AF assist lamp, so it’s going to have problems in a lot of social situations.


The second weakness is overall image quality. Although it seems to have lost the vignetting problem of the J10, it has a couple of new problems all of its own. First, the automatic white balance is inconsistent and unreliable, and second, every shot I took seemed to lack contrast and saturation, leaving shots looking pale and washed-out. I thought at first that I’d somehow got dirt on the lens, but I checked and cleaned it, and still got the same results.


Although the J12’s 8.2MP sensor is capable of capturing a fair amount of fine detail the lens quality is quite poor. Even in the centre of the frame the images look generally soft, while the corners of the frame are badly blurred. It also produces significant barrel distortion at wide angle. 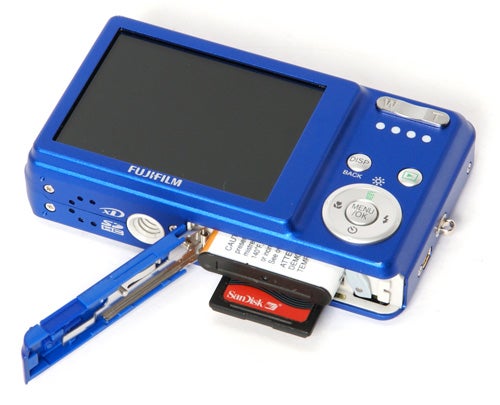 Noise control is actually not too bad, and shots taken at 400 ISO are good enough for small prints if you’re not too fussy. Even shots taken at the 1600 ISO maximum setting could be used on a web page or blog without too much embarrassment.

Although it lacks just about every advanced feature from the past two years, has serious issues with its autofocus system and has less than ideal picture quality, the Fujifilm FinePix J12 is still probably the best camera you’re likely to find at this price point. Build quality, design and overall performance are quite acceptable, and it does have the advantage of being very easy to use. However it would probably be a better idea to save your pocket money for another couple of weeks and get something a bit more advanced. 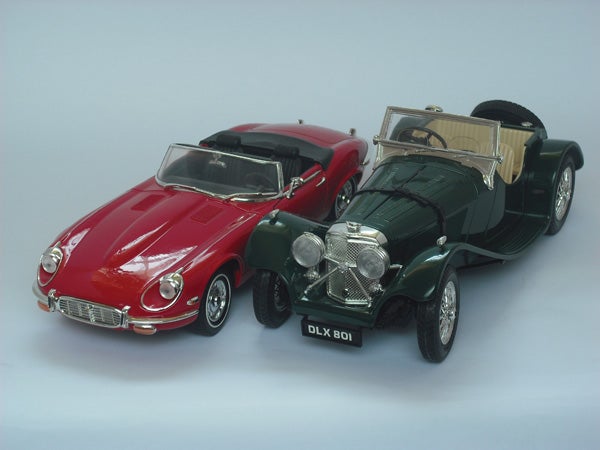 This is the full frame at 64 ISO. As you can see the auto white balance as not gone well. 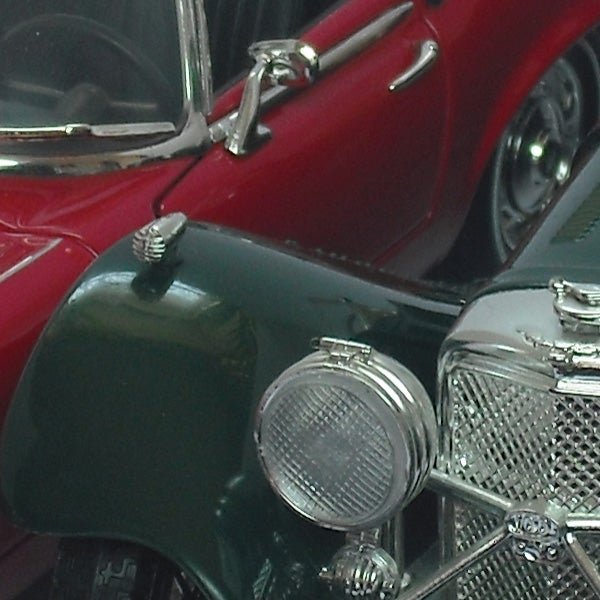 Despite the lack of contrast or saturation, there is very little visible noise in this 64 ISO shot. 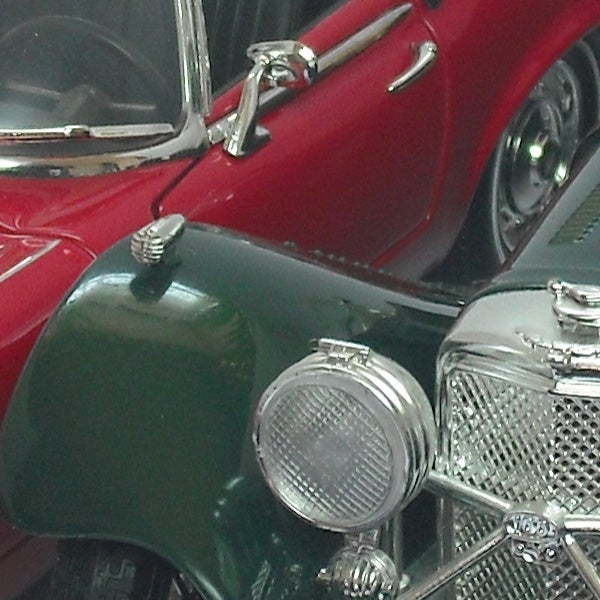 Slightly more noise at 100 ISO, with some blotchy colour patches. 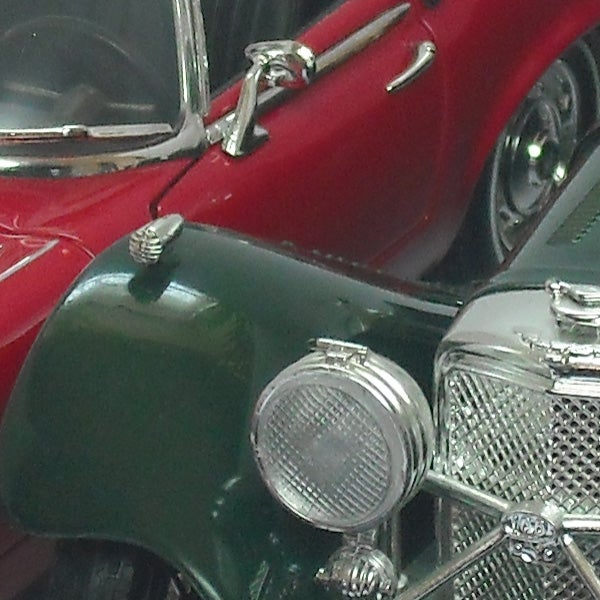 200 ISO, and the noise reduction system has cleaned the image up somewhat. 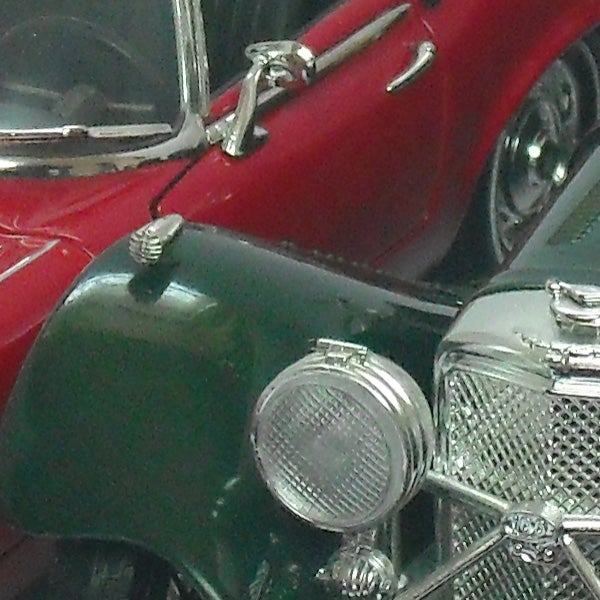 The blotches are back at 400 ISO, and they’ve brought their mates with them. 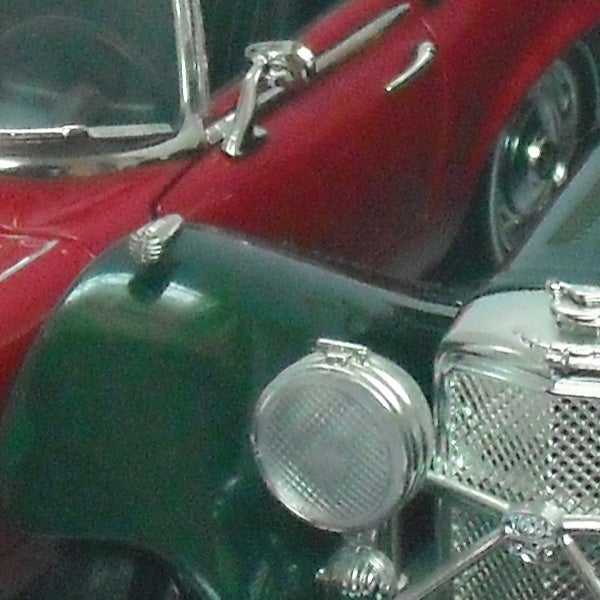 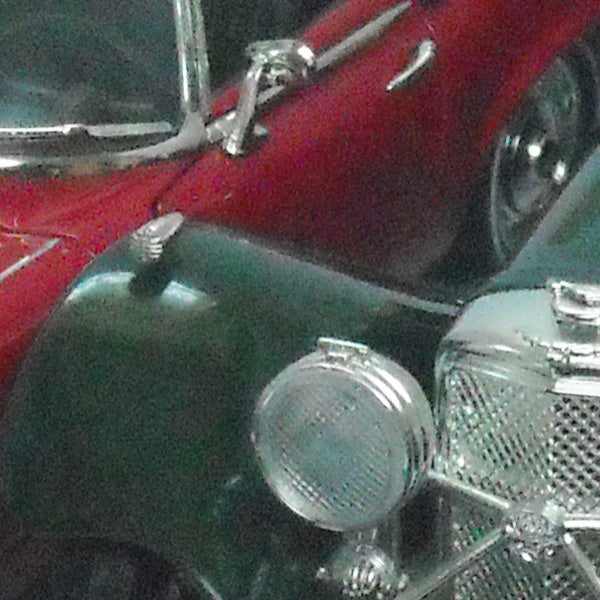 1600 ISO, and despite the noise the colour balance is actually not too bad. 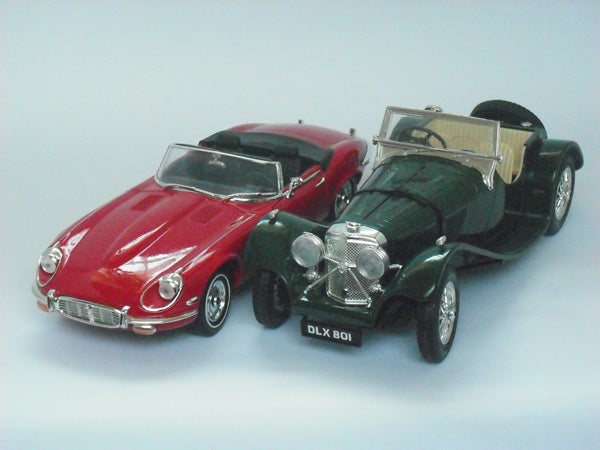 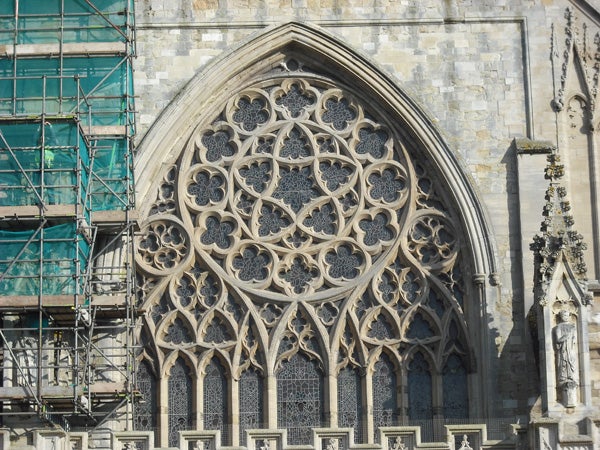 Here’s the usual detail test shot of the West Window of Exeter Cathedral, for you to compare with other cameras. See below for a full res crop, or click to see the whole picture. I hope they’re not going to cover the whole front with that green stuff; what will I photograph? 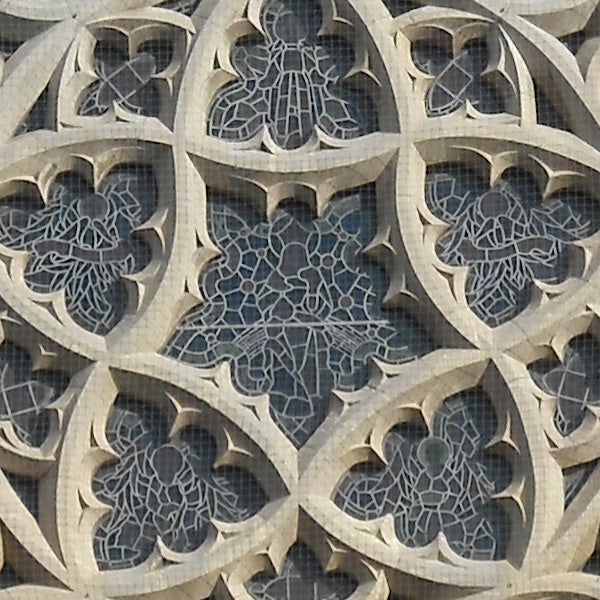 The J12 actually captures a fair amount of fine detail, but the picture looks slightly soft. 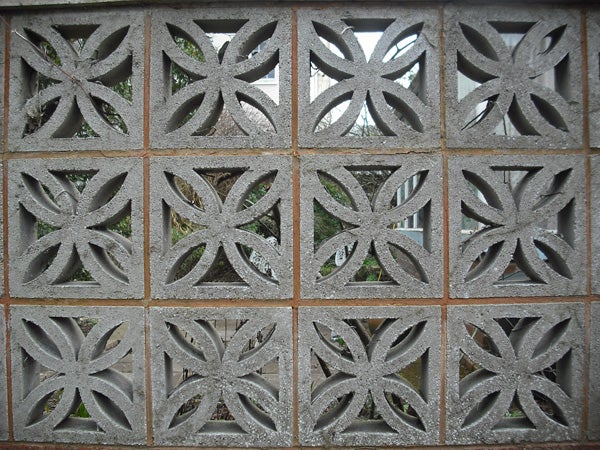 The lens produces quite significant barrel distortion at wide angle. 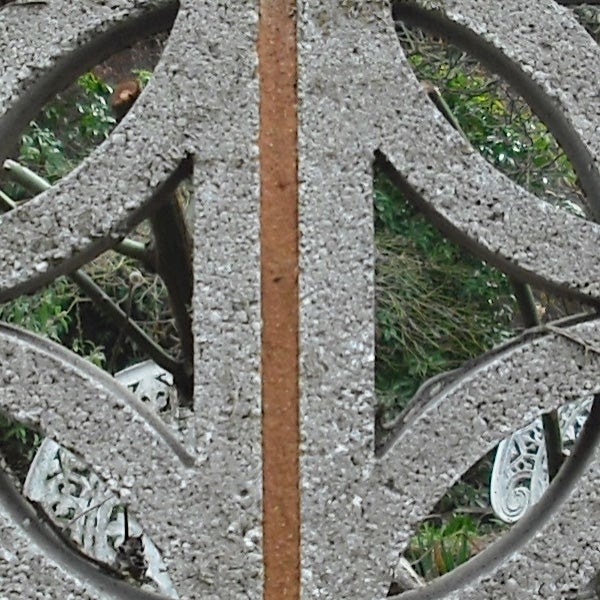 Even in the centre of the frame the image lacks sharpness. 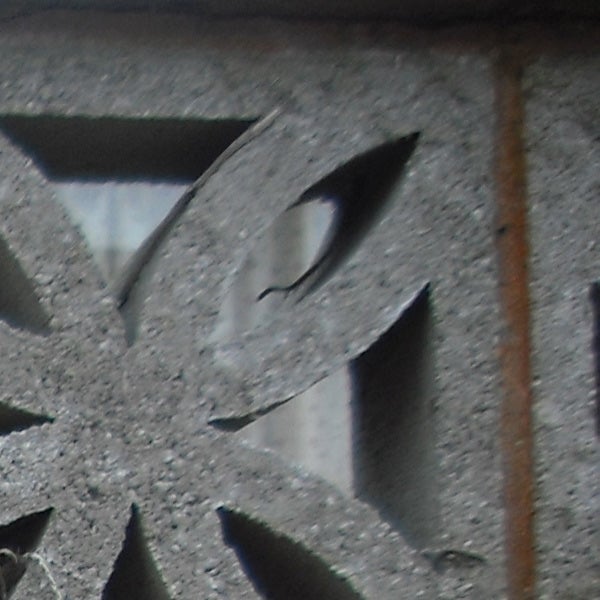 There is severe blurring in the corners ofthe frame. 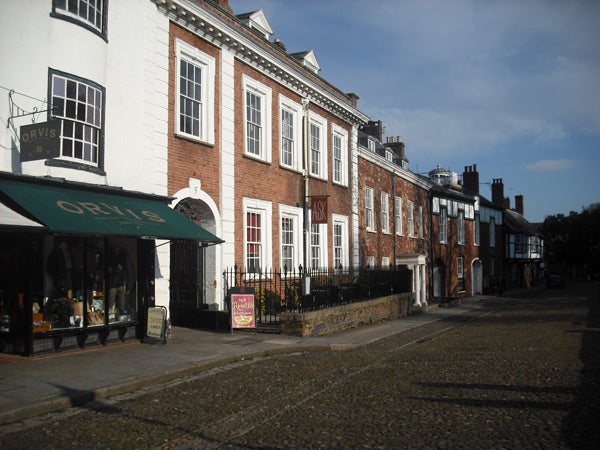 The wide-angle end is equivalent to 38mm. Also this shot lacks dyanmic range. 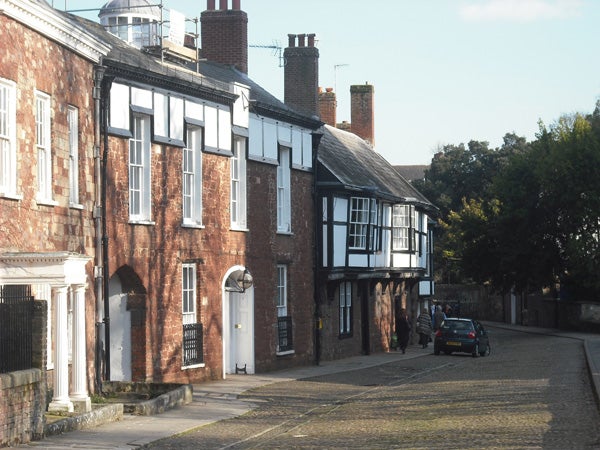 The telephoto end is equivalent to 113mm. 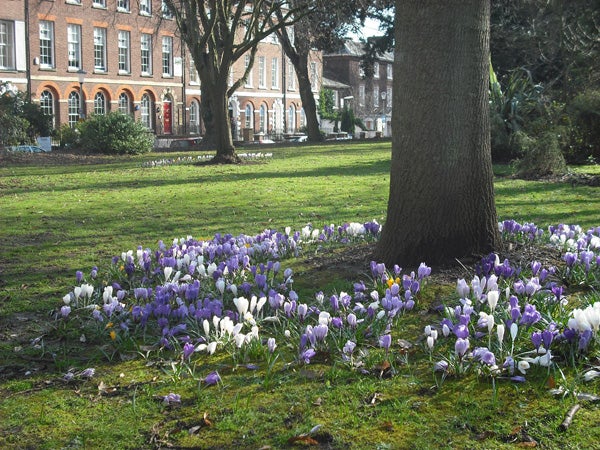 The colours in this shot lack depth and saturation. 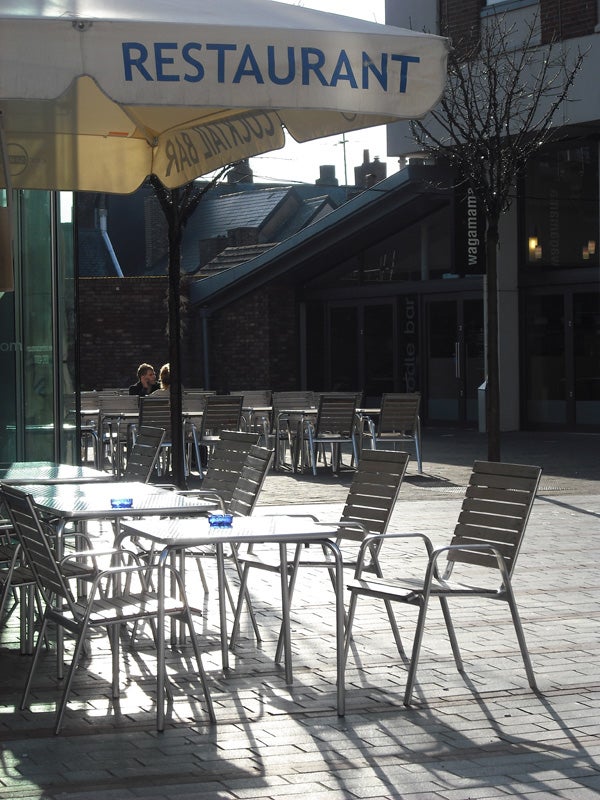 This high-contrast shot shows the lack of dynamic range.