Back in September I reviewed the Fujifilm FinePix F30, and gave it high marks particularly for its market-leading low light and high ISO capabilities, which at the time were unmatched by any other camera on the market. It seems I wasn’t alone in my admiration of the F30, because it went on to win the TIPA (Technical Image Press Association) award for best compact digital camera of 2006, and positive reviews from other photography magazines and websites. It has proved to be an exceptionally popular model. 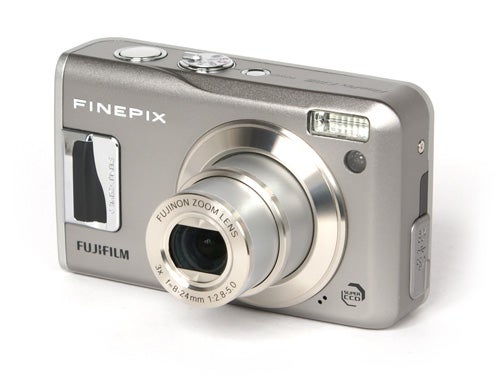 Naturally Fujifilm was keen to capitalise on this success, so in November it launched the FinePix F31fd, which is based on the F30 but features the addition of the ultra-fast hardware-based Face Detection technology first seen in the FinePix F6500fd, reviewed here in October. Its current list price is £259.99 but it is widely available from online retailers for under £200. 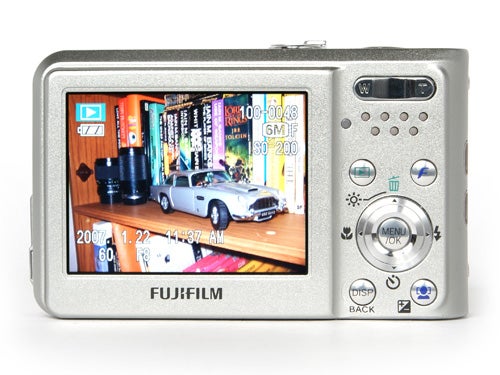 In appearance the F31fd is, unsurprisingly, virtually identical to the F30, with only the addition of a small rubberised grip on the front panel detailing, and an extra label on one of the rear panel buttons – which activates the Face Detection system – to tell the two models apart. It has the same strong all-metal body finished in a attractive anodized semi-matt texture, the same 3x zoom f/2.8 – f/5.0 Fujinon lens, and the same 230,000 pixel non-reflective 2.5in LCD monitor as its older sibling.


Internally as well the F31fd shares its main components with the earlier model. It is equipped with Fuji’s excellent Real Photo Processor II, the technology that makes the Face Detection system possible, and the Super CCD HR VI sensor. 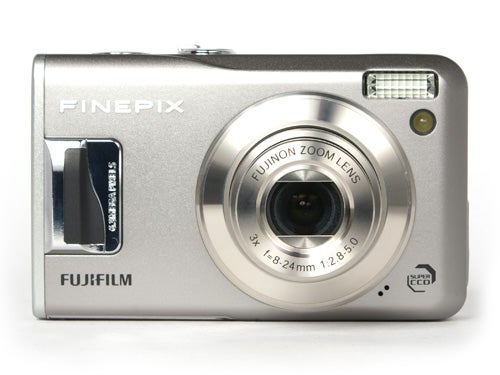 As I’ve noted before, Fujifilm has always insisted, quite correctly, that superior image processing, a good lens and an efficient sensor are far more important for final picture quality than simply cramming more and more photo sensors onto the CCD. Other manufacturers and the buying public appear to be coming belatedly to the realisation that there is little real advantage to be had from a 10-megapixel compact, when the quality of most compact zoom lenses simply cannot match that kind of resolving power. 10MP sensors are also more prone to image noise and have relatively low dynamic range. It is generally reckoned that with current lens technology, between six and seven megapixels is the optimum resolution for compact cameras.

The F31fd has a resolution of 6.3-megapixels, and with Fuji’s Super CCD technology, with its large octagonal sensor cells arranged in a diagonal pattern rather than the perpendicular chequerboard pattern of smaller square cells used in a conventional CCD. This provides the advantage of a larger area to capture light, usually giving slightly better dynamic range and colour depth than an equivalent conventional CCD.


Despite the addition of new technology, the F31fd’s performance results are identical to the F30. It starts up in approximately 1.5 seconds, which is quicker than most, and its shot-to-shot times are also excellent. In single shot mode it can manage a shot every two seconds, which is quite respectable. It has three continuous shooting modes; in the long period mode it can shoot a frame every 1.4 seconds and keep it up until the card is full. The other two modes fire at two frames per second, but then only save either the first or the last three shots of the sequence. 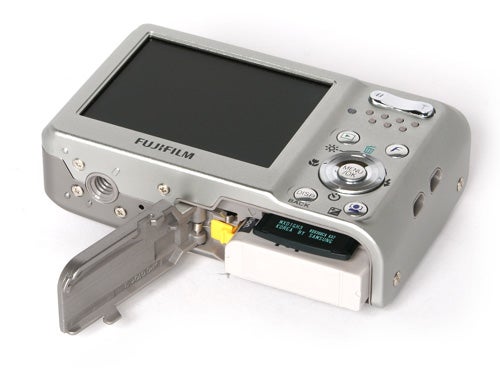 It has the same fast AF system as the F30, locking on to a subject in under half a second even in low light, thanks to a powerful AF illuminator with a range of about four metres.


Like the F30 the F31fd is powered by a very large 1800mAh Li-ion battery, the largest I’ve seen in a compact camera, which Fuji claims is good for am extraordinary 580 shots on a full charge. I took more than 250 shots with it over three days and the charge meter didn’t move from registering full.


At maximum resolution and quality it produces JPEG files averaging around 3MB, and a 1GB xD-Picture card is enough for approximately 341 shots, or 14.9 minutes of video shooting at 640 x 480 resolution and 30fps. 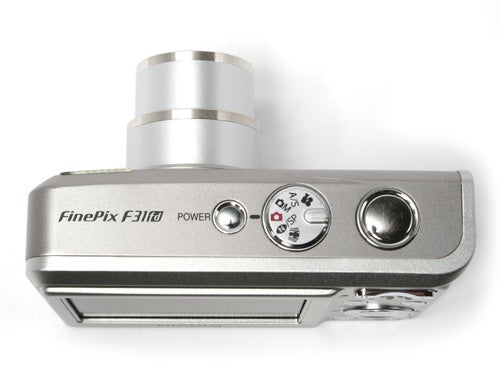 I’ve yet to be convinced that face detection technology is anything more than a gimmick. I suppose it could have its uses if you’re shooting a portrait against bright backlighting, but then a good matrix metering system should cope with situations like that, and if it doesn’t then any camera sufficiently sophisticated to have FD technology probably also has spot metering as well, as indeed does the F31fd, which is specifically included to cope with difficult lighting conditions.

Gimmick or not, it has to be said that Fuji’s FD system is very good, as far as such systems go. It will detect any face in the central two-thirds of the frame almost instantly, including faces in photographs or on TV and even my Star Wars action figures. However it only detects faces that are looking directly at the camera, and even a slight angle is enough to confuse it, as is strong side lighting. Also for some reason it will sometimes recognise cats’ faces, but doesn’t seem to like dogs. 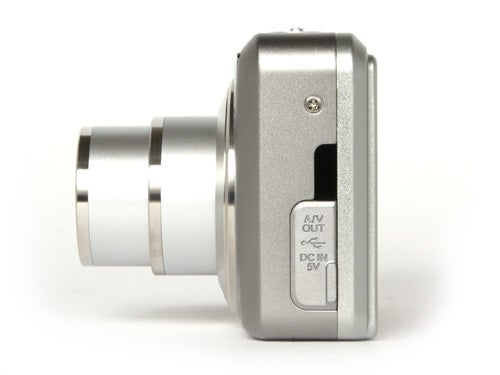 Face detection systems work by pattern recognition, detecting the relative positions of eyes, mouth and nose to the general shape of the face, so anything that obscures part of the face, such as a broad-brimmed hat, a scarf or large sunglasses will also usually confound it. Since FD systems aren’t infallible and are so easily confused, it’s not a good idea to rely on them.


Face Detection aside, the F31fd has the same major selling point as the F30, namely its exceptional high-ISO performance. It has a maximum setting of 3200 ISO at full resolution, and while that setting is quite noisy, at 1600 ISO it performs better than most other cameras do at 400, and is effectively noise free at 800 ISO. Combined with its excellent low light focusing ability this makes it an ideal camera for social snapshot photography, able to take photos in dimly lit rooms or outdoors in twilight conditions without the flash. 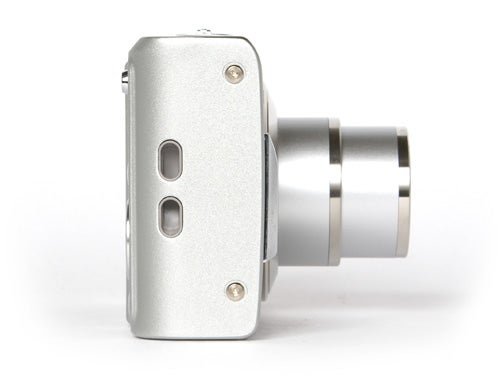 Image quality is also very good. The lens produces excellent corner-to-corner sharpness, and has virtually no wide-angle barrel distortion. Exposure metering is outstanding, and colour reproduction is also faultless. The only criticism, and one that I’ve made before about Fujifilm cameras including the F30, is a higher than usual level of purple fringing on high-contrast edges, especially next to very bright highlights. This isn’t unique to Fuji cameras, but is worse than some competing models.


All in all the F31fd is an extremely good camera, capable of producing outstanding results in circumstance that would defeat most other models. The only question is whether you think that the addition of FD technology is worth the price. If not, then the F30, currently available for £154, may be a better option.


Like its predecessor the F30, the Fujifilm FinePix F31fd has the best high-ISO performance on the market, as well as a number of other useful features, not least of which is class-leading battery duration. Build quality, style, performance and photographic results are also as good as anything else on the market. However the Face Detection technology is probably not enough to justify the relatively high price compared to the outstanding F30. 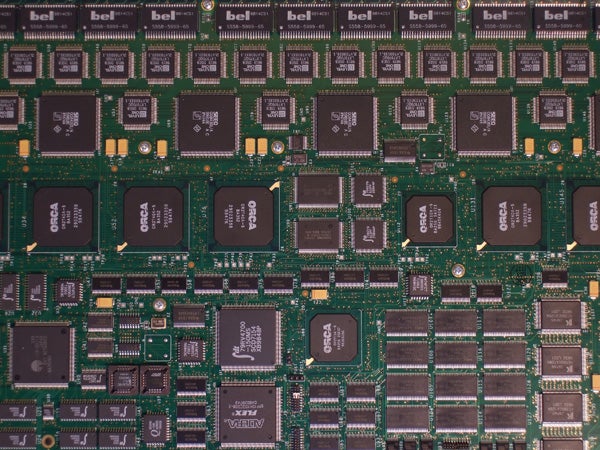 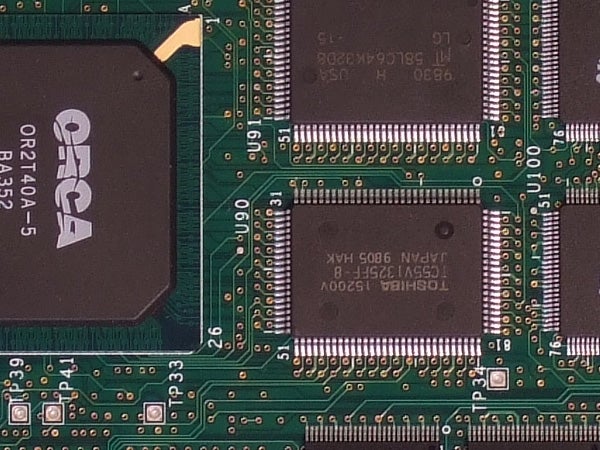 At the lowest ISO setting the image quality is predictably flawless, with not a trace of image noise, although the shot is under-exposed by about half a stop. 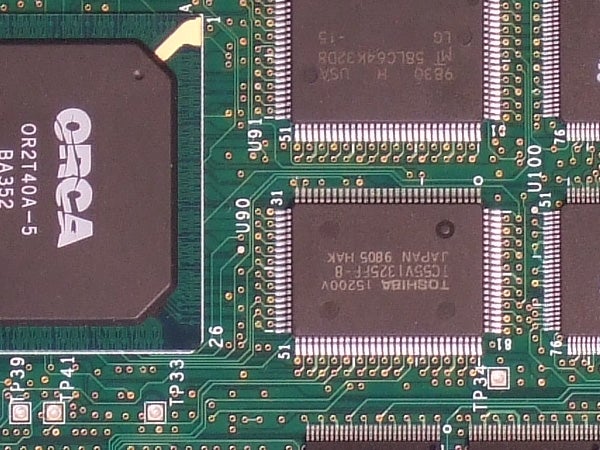 This time the exposure is spot on, and the picture is still totally noise free. 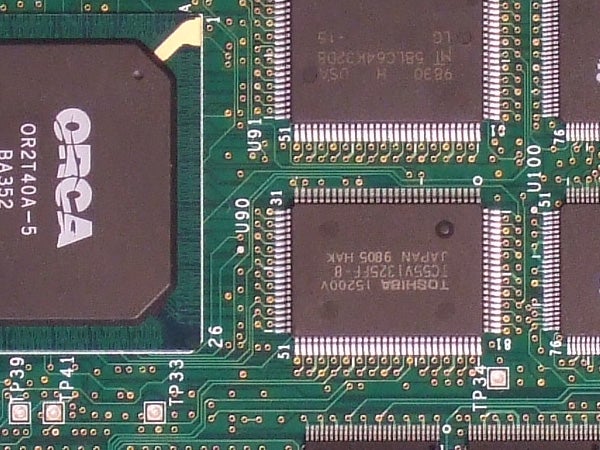 At 400 ISO most cameras are showing significant image noise, but with the F31fd this shot is virtually identical to the previous one. 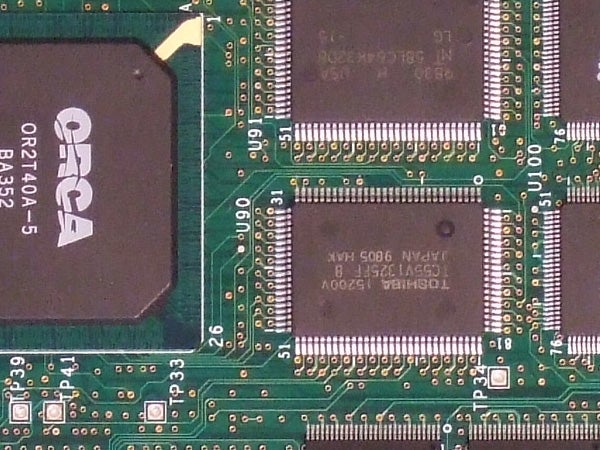 At 800 ISO there is still virtually no visible image noise, although the noise reduction system has sacrificed some fine detail to keep it that way. 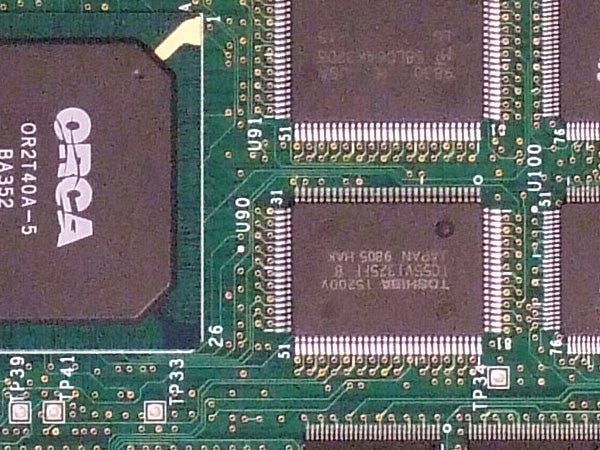 At 1600 ISO there is some image noise visible, but less than most other cameras would be showing at 400 ISO. Again some fine detail has been lost, but colour rendition is excellent and the picture would make a good print. 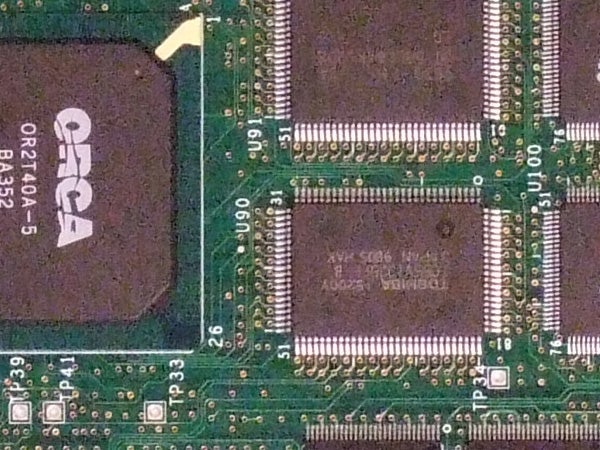 At the maximum ISO setting there is now quite a bit of noise visible, and some colour saturation has been lost, but the overall image quality isn’t bad and the picture could still be printed at snapshot size. 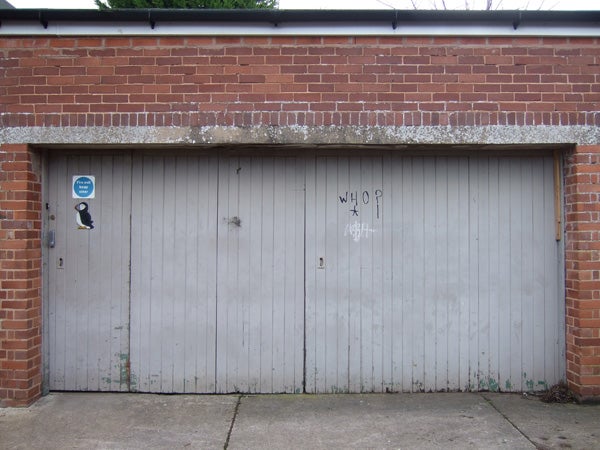 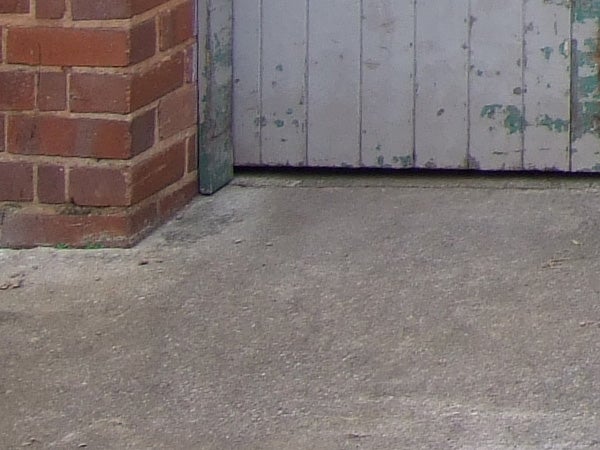 This is a 100 percent crop from the corner of the previous image, showing excellent corner sharpness. 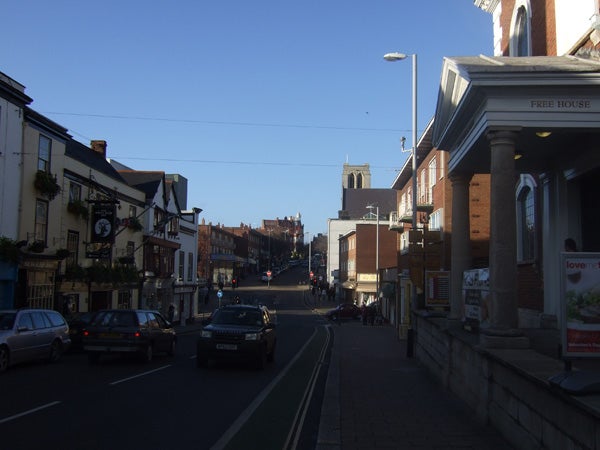 The wide end of the F31fd’s zoom range is equivalent to 36mm, slightly wider than average for a compact. I think that blue stuff at the top of the picture may be the sky. 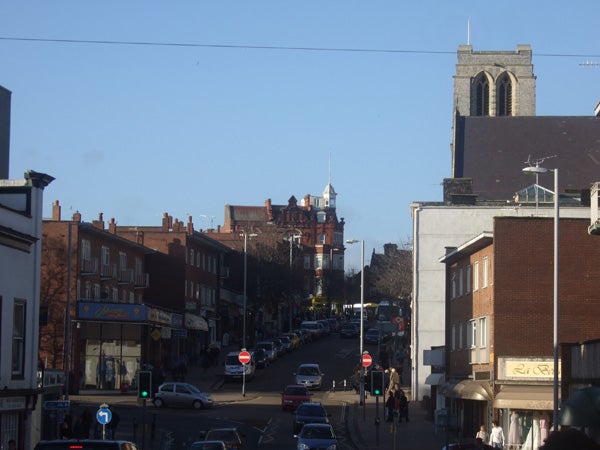 Taken from the same spot as the picture above, this demonstrates the telephoto end of the zoom range, equivalent to 108mm. 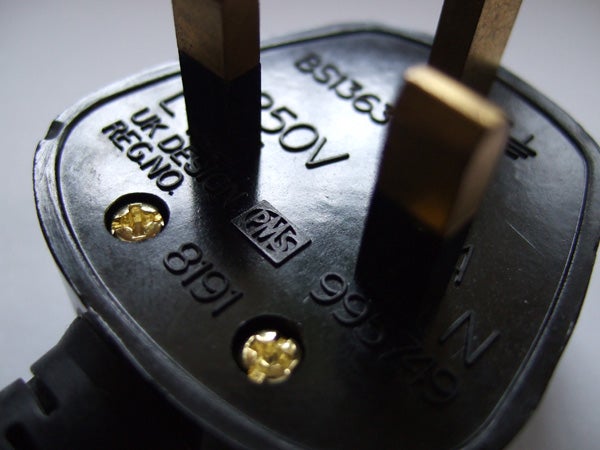 The lens has a minimum focusing distance of 5cm in macro mode, good enough for some extreme close-ups. 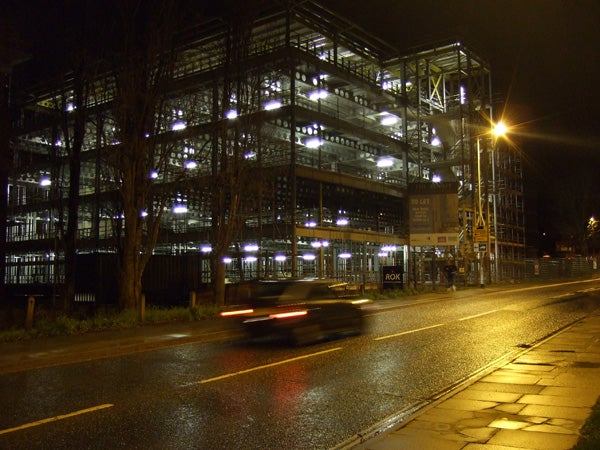 The F31fd really comes into its own after dark, when its exceptional low light abilities set it apart from other compacts. 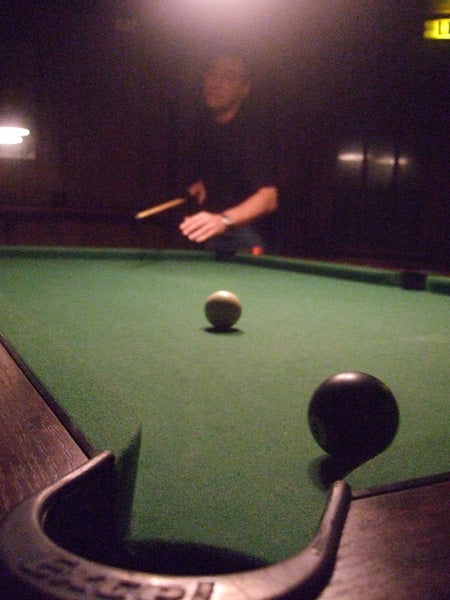 This shot was taken at 3200 ISO, giving a shutter speed of 1/200th of a second in the usual dim pub lighting. It’s quite noisy but the colour rendition and exposure are good. Can’t believe I missed that shot. 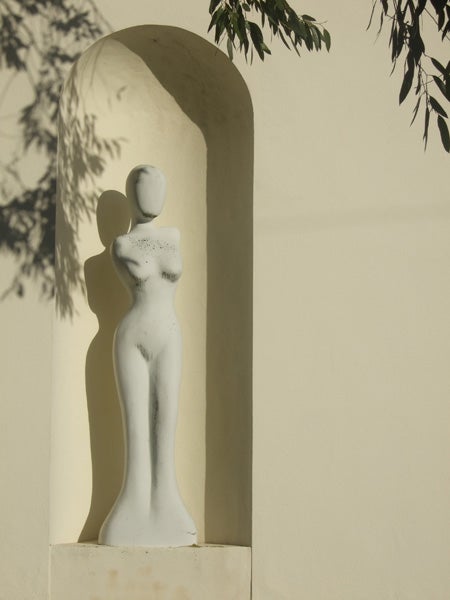 The AF and exposure systems had no problem with this relatively low contrast shot, although for some reason the Face Detection system didn’t work. Oh, wait…