To anyone else who’s a keen photographer and gadget nerd like myself, reviewing digital cameras for a living must seem like the ideal job. I get to play with all the latest toys, sometimes before they’re even available in the shops, the hours are flexible enough for me to go out taking photographs whenever I want, and I get to work from home. On paper at least it sounds like paradise. 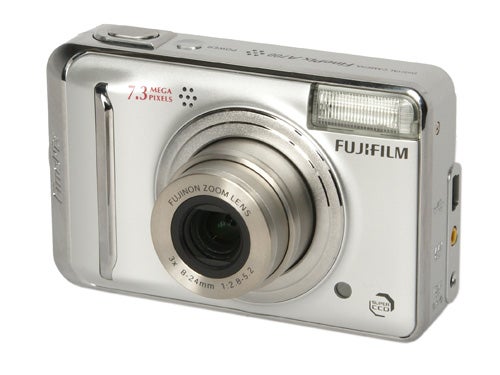 To be sure it is very cool and I wouldn’t willingly trade jobs with anyone except Angelina Jolie’s masseuse, but some weeks it just plain sucks. Right at the moment it’s pouring with rain, dark, windy and freezing cold outside, but I’ve got to go out and try to take some decent photos with today’s camera, the Fuji A700, while anyone with an ounce of common sense would stay at home with the central heating turned up, have a nice hot cup of tea and curl up in front of the TV.


It gets worse. When I’ve done the photos and my fingers have thawed out, I’ve got to sit down and write 1,000-odd words about it. That may not sound like a major problem, but you haven’t seen this camera. It takes the concept of a simple point-and-shoot and runs clear out of the building with it. If it were any simpler it would squirt water instead of taking photos. Would anyone notice if I only wrote 200 words about it and then filled up the rest of the space with lightbulb jokes? ”(yes; now get on with it – ed)” 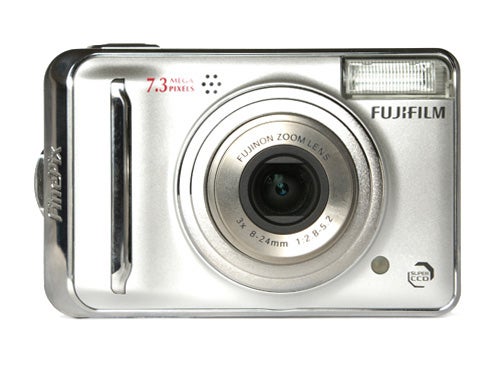 Launched in September last year, the A700 is the most powerful of the four models in Fujifilm’s A-series of point-and-shoot compact cameras. It features a 3x zoom lens, 2.4in 112k pixel LCD monitor, 400 ISO maximum sensitivity and a 7.3 megapixel 1/1.6-inch Super CCD HR sensor. It’s strictly a budget camera, and currently retails for around £110, although some online stores are selling it for as little as £95.


There aren’t many cameras that can compete with the A700 in terms of bang-for-your-buck. The closest contenders are probably the Olympus FE-170 at £95, the Sony DSC-S600 or the Pentax Optio E-20 both at around £100, although all of those cameras are only six megapixels.

Despite its low price, few corners have been cut in build quality or finish. The A700 has a part metal, part plastic case in a matt silver colour that doesn’t show up finger marks, with some shiny chrome parts that do, but it is well made and feels solid and robust. Measuring 93 x 60 x 30mm it’s not a particularly small camera, and weighing approximately 190g including two AA batteries it’s none too light either, so it’s not really one to carry in your shirt pocket. However the lens has an automatic cover and folds flush with the body, while the minimal controls are all smoothly rounded, so it’ll live comfortably in a coat pocket or handbag. 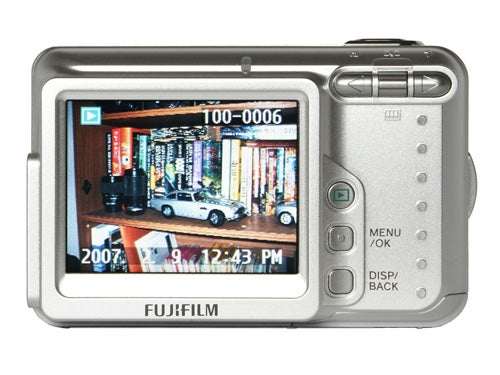 Just make sure you don’t have too much pocket lint in there too though, because the USB, mains adapter and A/V out sockets on the side of the camera are uncovered, making them vulnerable to dust and dirt.


With such a simple specification the controls are of course very limited. However this doesn’t excuse the awful combined zoom and menu navigation control, something which I had hoped Fuji had abandoned several years ago. The zoom lever is nothing more than a rocker switch, and the zoom action is stepped in nine increments from wide to telephoto. The left and right controls on either side of it control the macro and flash modes, but the left-hand one (macro) is awkwardly positioned against the monitor surround, and is difficult to press.


Not surprisingly for such a budget-priced camera, the A700 isn’t exactly bursting with features. Even in the ironically-named “manual” mode, the menu options consist of only shooting mode (full auto, portrait, landscape, spot or night), image quality (6 choices), self timer (10 or 2 secs), ISO (100-400), exposure compensation and white balance. In auto mode this choice is even more limited, since white balance and exposure compensation are not available. There is the usual selection of flash modes, with red-eye reduction and slow sync for night shooting, and a slightly lacklustre macro focusing mode with a range of 10cm at wide angle. The movie mode is extremely poor, offering a maximum of 320 x 240 pixels at a slow and jerky 10 frames a second, with mono audio. 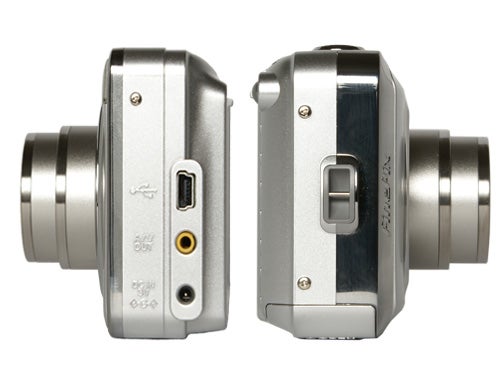 In playback mode there are some limited image editing options, including cropping, voice memo and DPOF printing, and the ability to view pictures as a slideshow, but that’s pretty much your lot. To be fair this specification is enough to cope with most everyday casual photography, but it really is the very barest of minimums.


Performance is also rather notable by its absence. The camera takes a sluggish four seconds to start up and another three to shut down again. There is no continuous shooting mode, but firing single shots at maximum resolution it could only manage an average of one shot every four seconds, which is very slow indeed. Image playback is also slow, taking around two seconds to flip from one image to the next.

The autofocus system isn’t going to win any races, but it’s not too slow, focusing in good light in about a second. It slows down a bit in low light, but it will usually find a focus within two seconds even is a candle-lit room. However at light levels a little lower than that it gives up completely. It has no AF illuminator, so focusing in the dark is not an option. 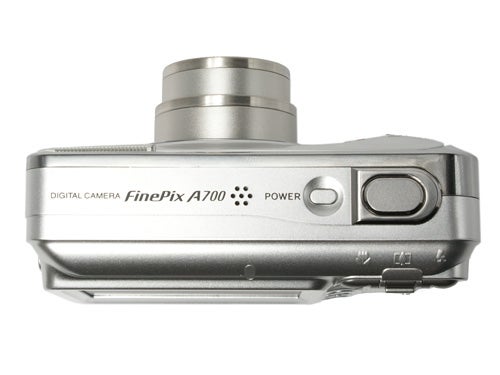 One concern is battery life. The A700 uses two AA batteries, so actual performance will vary depending on the brand and type used, but using 2100mAh Ni-MH rechargeables I was only able to take around 50 shots on a fresh charge, so you’ll need to pack some spares.


Fortunately the lack of features or performance is compensated by decent picture quality. The Fujinon lens provides good edge-to-edge sharpness, although it does suffer from some uneven barrel distortion at wide angle. The 7.3 megapixel HR sensor produces a good level of detail, roughly the same as some other similarly-powered cameras I’ve tested recently. Contrast is a little lacking in my test shots, but as I’ve already indicated they were shot an a very rainy and overcast day, go results in good light will certainly be better. Colour rendition was also a little muted, although probably for the same reason. 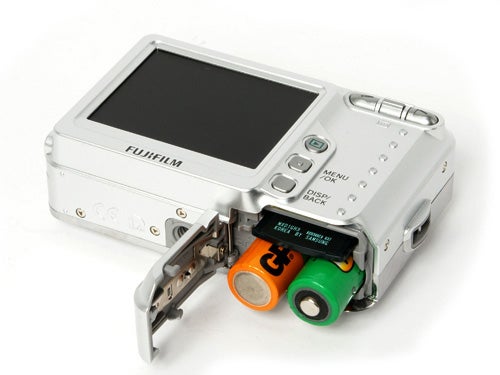 The built-in flash provided good colour and coverage and was well metered. With a stated maximum range of 3.8 metres it is powerful enough for most social situations.


With an ISO range of only 100-400 noise shouldn’t be a major problem, and ISO 100 shots are very smooth with good detail and contrast. However ISO 400 shots did show a significant amount of it speckling, although not enough to ruin the picture.


The FinePix A700 is so lacking in features and performance it’s hard to believe it comes from the same company that makes the F31fd and S9600. As budget-priced snappers go though, it isn’t too bad. It’s well made, incredibly easy to use, and is capable of producing reasonably good results under normal circumstances. Non-existent low-light focusing, terrible movie mode and low maximum sensitivity are handicaps however. 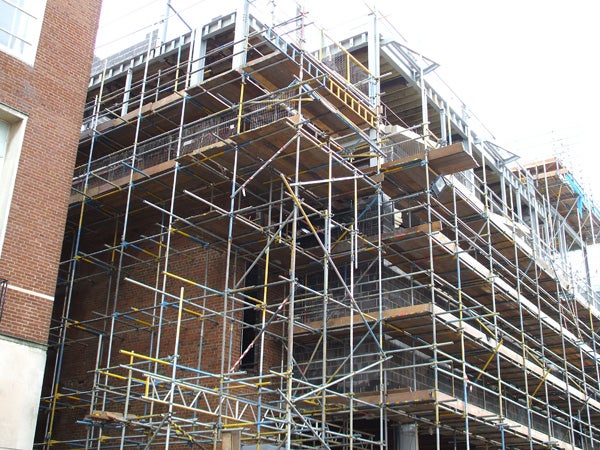 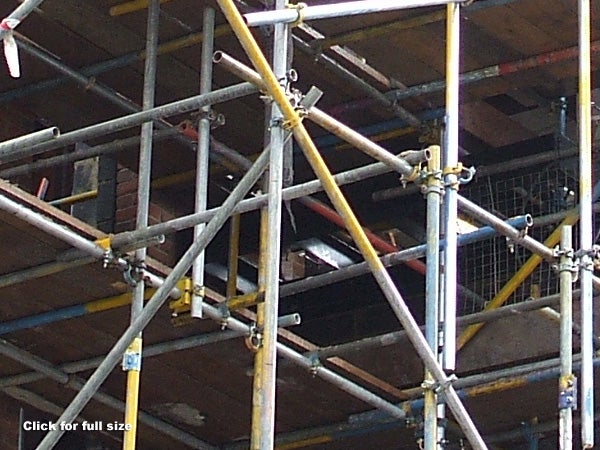 At the minimum ISO sensitivity setting, the picture is clean and sharp with a good level of detail, although it is a bit lacking in contrast, probably due to the appalling weather. 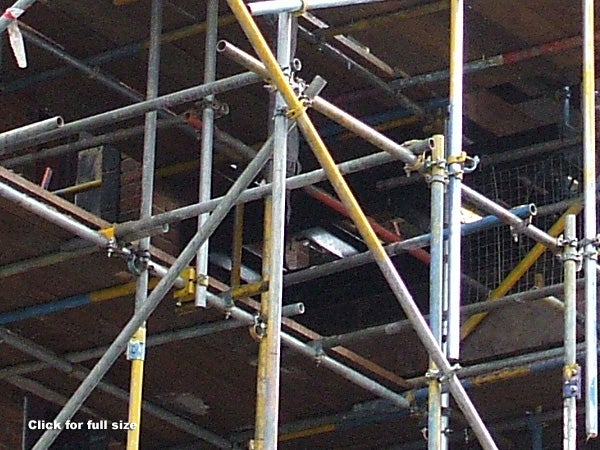 At 200 ISO there is a little image noise visible, but overall picture quality is still good, with virtually no loss of detail. 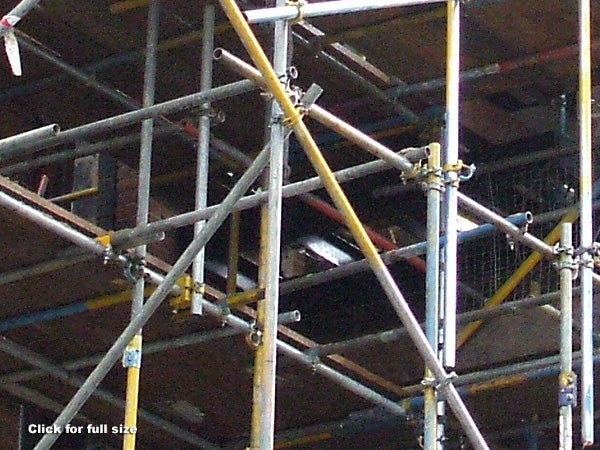 At the maximum ISO setting of 400, there is visible image noise in all but the brightest areas, some colour speckling, and some of the fine detail has vanished into the haze.

”A range of test shots are shown over the next few pages. Here, the full size image has been reduced for bandwidth purposes, and a crop taken from the original full resolution image has been placed below it in order for you to gain an appreciation of the overall quality. The following pages consist of resized images so that you can evaluate the overall exposure. For those with a dial-up connection, please be patient while the pages download. 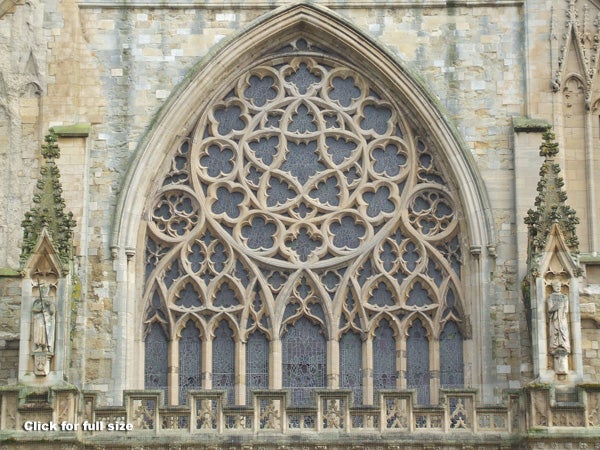 This is the standard shot that I use for detail comparisons. See below for a full-size crop, or click on the image to download the original version. 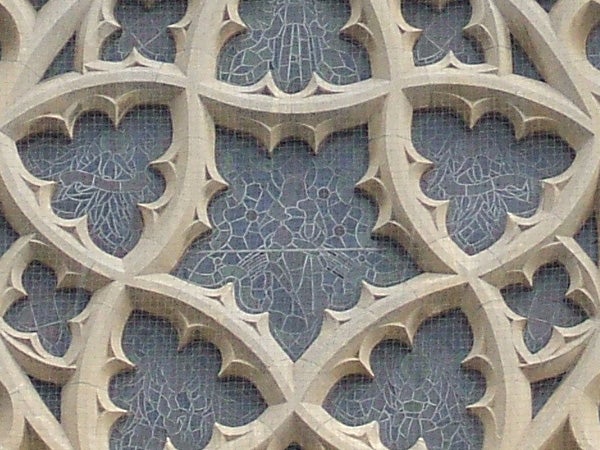 For those of you with slow connections, here’s a 100 percent crop of the centre of the picture above, so you can see the level of detail. It’s about the same as most of the recent 6MP compacts I’ve tested. 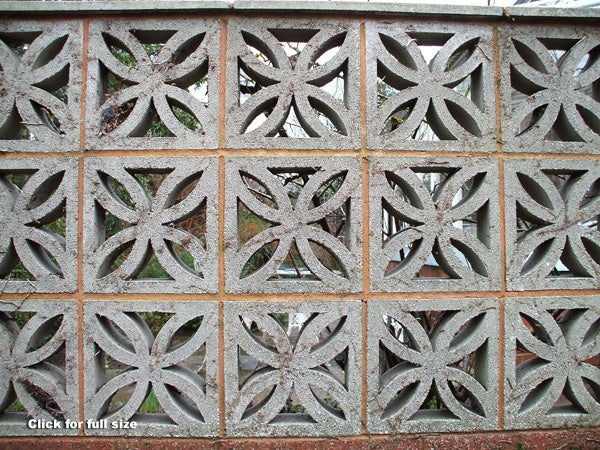 The A700’s lens produces some very oddly shaped distortion at its widest setting. 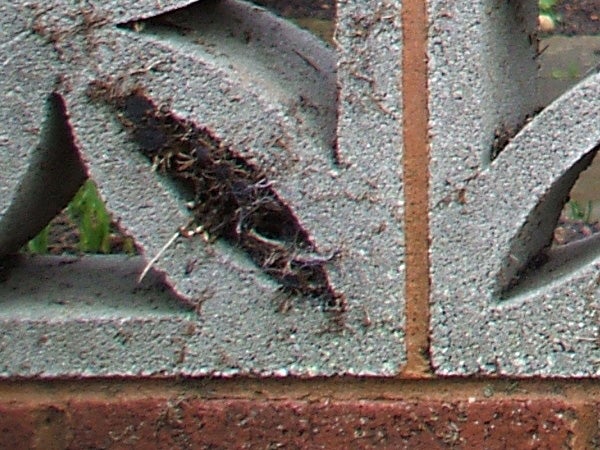 Corner sharpness is quite good for a budget camera, with minimal chromatic aberration. 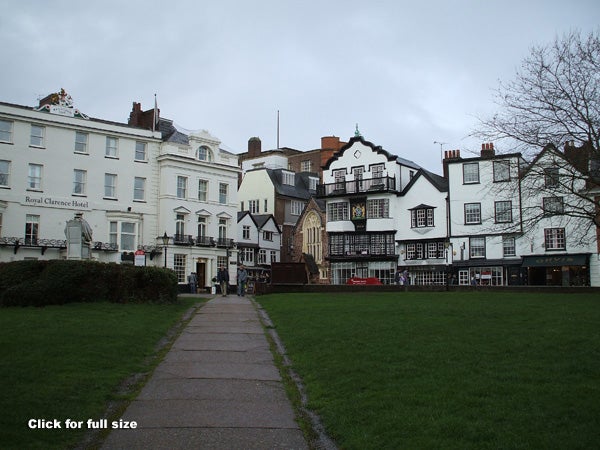 The A700’s maximum wide-angle setting is equivalent to 36mm, which is a little narrow but wide enough for most snapshots. 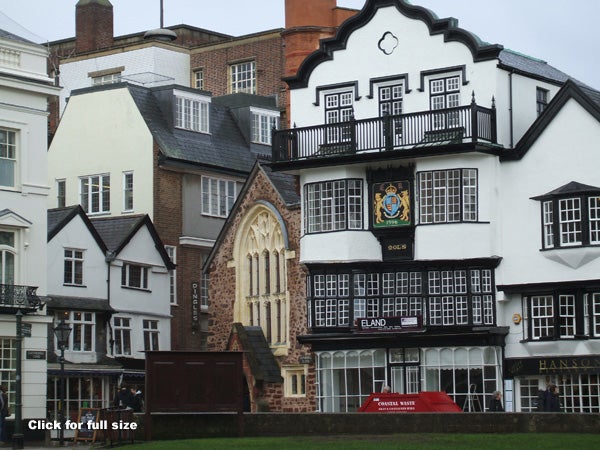 Taken from the same position as the shot above, this demonstrates the telephoto end of the zoom range, equivalent to 108mm on a 35mm camera. 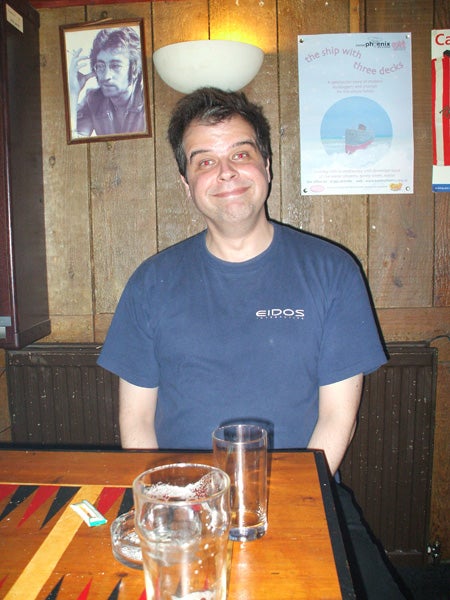 The A700 has a decent built-in flash with good exposure control and frame coverage. Red-eye can be a bit of a problem though.