What is the Fuego Element?

The Fuego Element F21C is what you get when a former Chief of Design for Apple decides to cook with gas. As you might expect from those origins, this is a smart, good-looking barbecue. It manages to have a tiny footprint while offering a large grilling surface.

Does it knock Weber, the current king of barbecues, off its lofty perch? I know I’d rather have the Fuego Element adorning my patio, but it’s not quite as easy to use as some less attractive competitors.

Weighing 41kg without the gas tank, the Fuego requires a strong back and a safe pair of hands to get it into the garden.

The box isn’t too big, though, and there aren’t many pieces to put together – around a dozen or so, ranging from the battery-powered ignition (one AA included) to the body shell and thermometer. 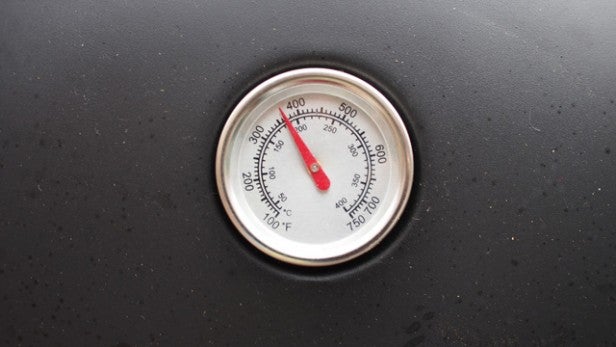 The big claim is that the Fuego can be set up in less than 30 minutes. It took me three hours and an electric screwdriver to put together my last charcoal barbecue, so I was apprehensive to say the least. That all changed when I saw just 12 screws in the box. 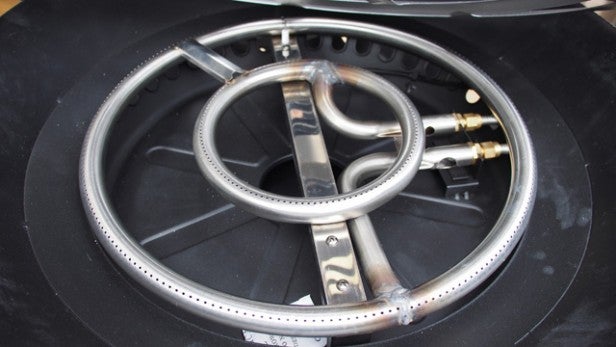 I managed to build the Fuego on my own, and without rushing, in just 25 minutes. Much of it was already put together, such as the lid handle and casters, and all the screws fit the panels. You’d expect that to be the case at this price, but I’ve had problems with other expensive barbecues in the past.

All that’s needed is a screwdriver – Phillips or flathead will do – and a little dexterity to get to four screws that are a tad obscured by the frame. Aside from that there’s a typical quick-coupling valve to attach to the gas tank (which you need to source yourself) that’s simple to connect.

Everything fits well and feels solid. All in all, simple stuff. 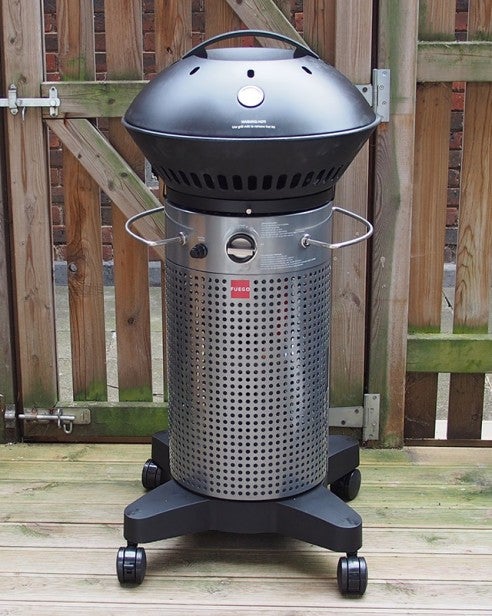 The Fuego Element is also dead easy to wheel around, even when lit. This is a well-made product, but the hinged door that hides the gas cylinder didn’t quite fit flush on my unit. The top snaps to an upper magnet, but the bottom has a gap that means the second magnet can’t quite pull it in. The rest of the Fuego’s design is so clean and slick that this annoys me to irrational levels.

The other area that needs some work is a chain that attaches the lid to the body. The Fuego’s lid lifts off entirely – there are no hinges – and slots into one of the shiny metal grips on the side.

This keeps it handy when you want some al fresco grilling, but if you’re clumsy like me then even a little knock with an elbow sends it toppling. The chain is there to keep it from hitting the ground. Unfortunately the links are far too flimsy and mine broke immediately. I’ve already dropped the lid three times, the first one being the worst, where I managed to snap the plastic handle. 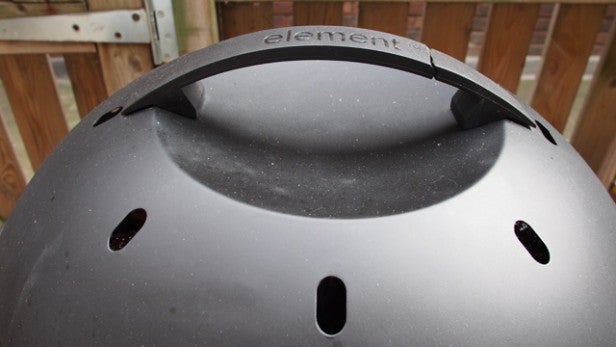 It’s a real shame, since in every other way the Fuego Element is a beauty and a real design triumph. The stainless steel wraparound (also available in carbon steel) looks great and the casters are mobile yet stable. The cast-iron grill is heavy and heats up quickly.

The thing that impresses me most, though, is its size.

The Fuego Element has a tiny footprint and can fit on even the most modest of gardens or patios. Best of all is that you actually get an impressive 50cm-diameter cooking area. That’s just 4cm less than my behemoth charcoal barbecue and only 17% smaller than the far chunkier Weber Spirit Original E210 Gas BBQ. 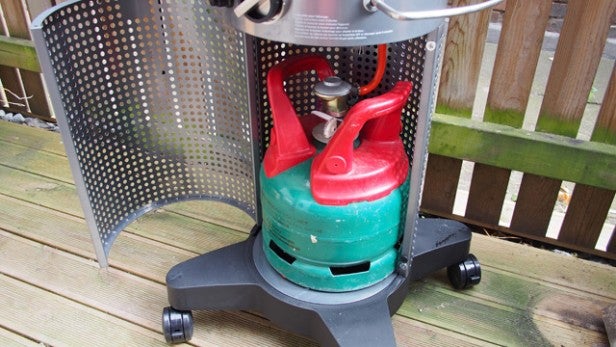 What this means is that you can get plenty of food cooking at the same time. I managed to get two racks of pork ribs, eight pieces of pork belly and six sausages with space to spare. Take care, though – most barbecues have a recessed grill, but the Fuego Element doesn’t. This makes it look cool, but there’s nothing to stop a rolling sausage slide right off. I had one close call, but haven’t dropped anything quite yet.

So there’s plenty of surface area for cooking burgers, but does the Fuego Element cook them well? The short answer is yes. It does a good job of caramelising the outside while keeping the inside nice and moist.

The sturdy metal knob lets you finesse the clear blue flames that come out of two circular tubes. You can decide to either cook with both or just the larger outer ring. If you want to slow cook a big chunk then you can place it in the middle and let the outside flames do their work indirectly. 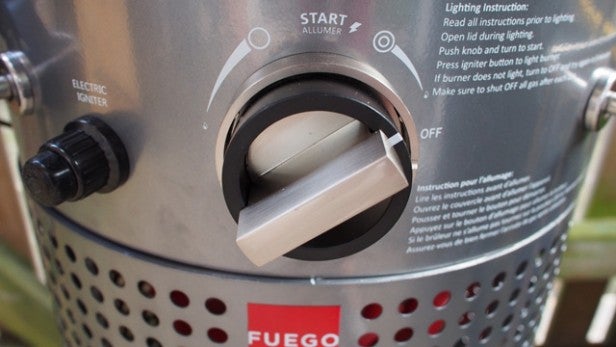 The middle doesn’t seem to get quite as hot as the edges, so I do find myself having to move items in and out to get them to cook at the same time. This may be a sign that the centre gas ring needs to be a little more powerful. 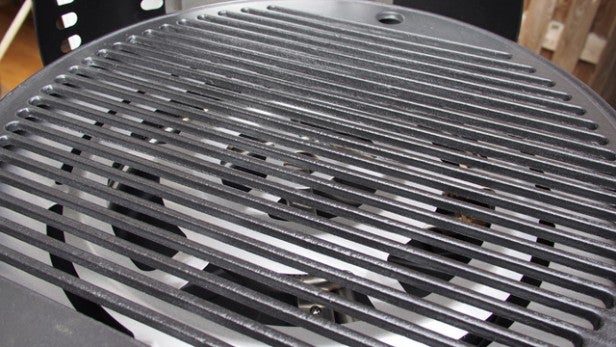 The lid is low and keeps heat in well while letting air circulate, thanks to plenty of vents located both on the base and in the lid. It doesn’t take long at all to get to 200ºC – around 5 minutes at full pelt with the lid on. I find myself grilling a lot more just because of how quick and easy it is to use when compared to a charcoal burner.

The shallow lid keeps the heat close to the grill and uniform, which ensures well-cooked meat throughout. You can forget about the age-old British tradition of charred-on-the-outside, raw-on-the-inside sausages. Then again, some traditions are vastly overrated. 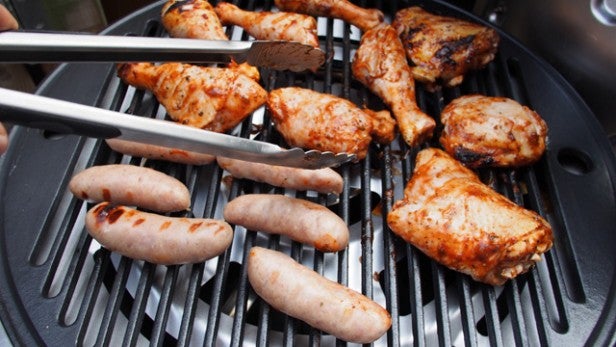 Unfortunately its shallowness also means the Fuego isn’t quite as versatile as some other barbecues. Beer-can chicken is one of my barbecue favourites – you rest a whole chicken on a half-full can of beer which evaporates into it, providing succulent, well-cooked meat. The Fuego Element doesn’t have the clearance for that recipe, but it will accommodate most barbecue fodder, as well as thick briskets or shoulders of lamb. 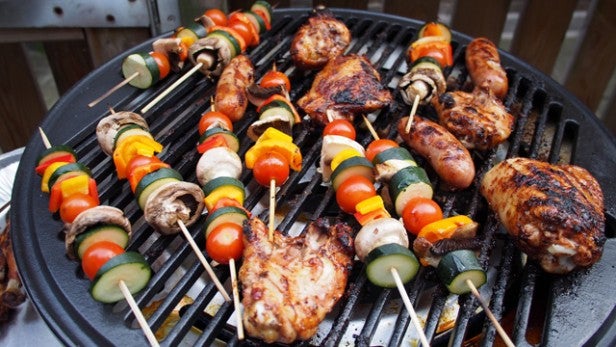 The Fuego lacks a smoker – a small area you can add wood chips to that gives that more traditional smoky-grilled flavour. I’m not going to go into the virtues of barbecuing with gas or charcoal here, but suffice to say that marinades are essential to imbue some flavour that odourless gas flames can’t provide. 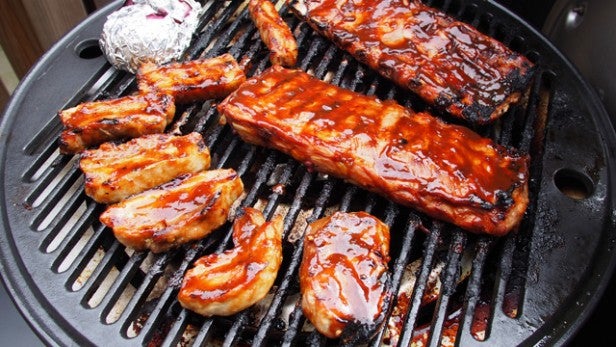 For those who like specs: I managed to get the Fuego Element up to 300ºC at full blast on a moderate summer evening. Using the adjustable knob, it’s easy enough to get it from 100 to 300 and everything in between. That means you can cook a pizza in the Fuego, too.

It also seems efficient. I’ve grilled for more than 15 hours and there’s still plenty of butane in the tank. (It’s also compatible with propane.)

One of the reasons I don’t barbecue as much as I’d like to – aside from the British weather – is the cleaning up afterwards.

I barbecued five times on the Fuego without doing anything more than scraping the grill each time. That meant an awful lot of fat and crusty bits left behind to help me test out how easily it scrubbed up.

To clean it you first need to put the Element on full blast and let it burn for a good 15-20 minutes. There was so much grease and crud that I actually managed to get a full-on bonfire going.

Once cool I removed the heavy cast-iron grill and used a plastic brush with soapy water. This did a half-decent job, but a wire brush is the way to go. 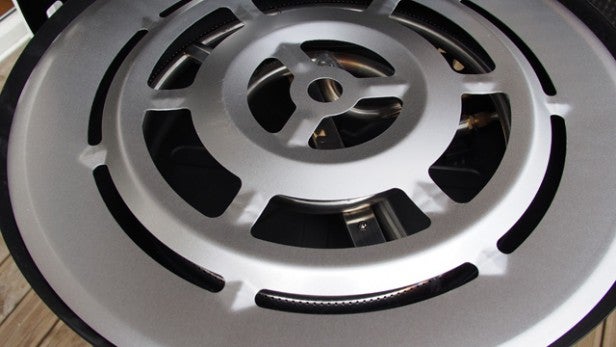 The ring guard that protects the gas rings is stainless steel and needs to be treated carefully – no wire wool. The areas that get scorched scrape clean easily enough with a plastic utensil, but the areas around the side, which don’t get hit by direct flames, are trickier to clean. Still, I found 10 minutes of elbow grease got it spick and span. 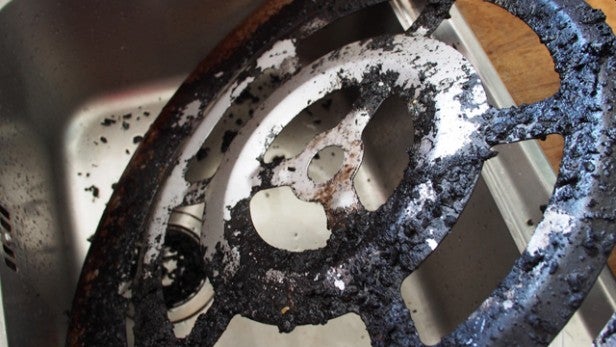 The Fuego Element has a grease trap to catch overspills. It only captures dirt that hits the centre of the barbecue, the rest stays under the rings and is a bit of a pain to clean up. Since you can’t pull it apart, I brushed as much dirt to the centre as I could, so it fell into the grease trap. It a little fiddly, but I got there in the end.

Overall, the Fuego is no harder to clean than other gas barbecue I’ve used, and is a lot less messy than trying to get rid of charcoal ash. The ring guard, in particular, is a godsend – I’ve often found that the small gas-pipe holes clog on other grills.

Should I buy the Fuego Element?

If you’re looking for a handsome gas barbecue, the Fuego Element is the way to go. It’s good-looking enough to be at home in the grandest of settings, yet compact enough to adorn a small patio.

Its accessories are also great. The folding, detachable side table is the most solid of its type I’ve seen, while the cover looks good and protects the Fuego from the elements.

As a meat griller it’s not perfect, though. The removable lid that makes it look like a Star Wars droid is also tricky to manage – a hinged lid would make life easier. I’d also like the option of a smoking box to get some extra flavour and aroma into my food.

Slick, stylish and compact, the Fuego Element oozes class. Just a few tweaks and improvements to the quality of some components and it could become the perfect gas griller.