FTL (short for Faster Than Light) is one of those rare things: a Kickstarter that actually delivered all the backing it got. The developers set realistic goals, met them and produced a fantastic game at a fair price that became one of the best indie hits of 2012/2013. Now it’s back with a new free Advanced Edition for PC and Mac and, even better, an iPad version. And in doing so, developer Subset Games has produced among the very best games you can play on any portable device, let alone the iPad. 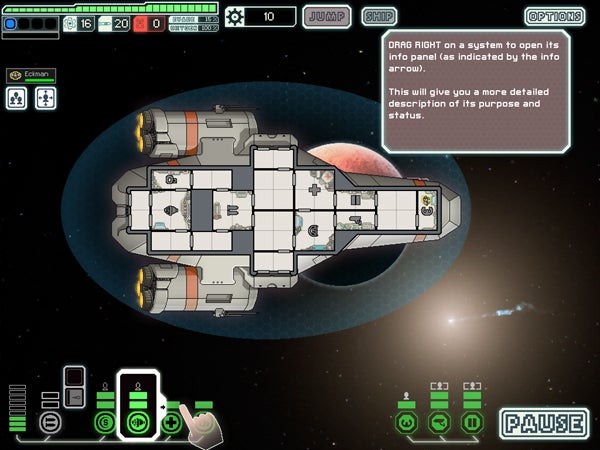 If you’re a newcomer to FTL, it’s a top down, real-time strategy game
set in space. It has elements of roguelike RPGs courtesy of its basic
graphics and randomly generating galaxy that refreshes on each play
through.

Your mission, which you have no choice but to accept, is to
pilot your Federation ship back to your base eight ‘sectors’ away as the
‘evil’ Rebels pursue you all the way. You carry information vital to
defeating the rebels… and you know what, all this isn’t especially
important. 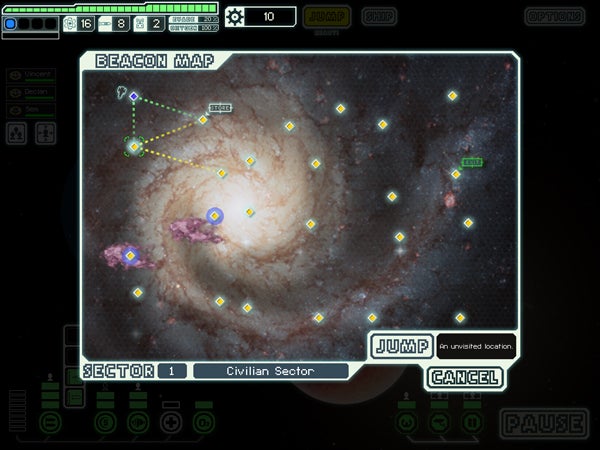 What’s important? That FTL is endlessly fun, challenging and varied. The randomly generated galaxies ensure no single play through is the same, and you can get from beginning to end in two hours or so (or die and start again within 10 minutes).

There are 10 ships to unlock, each with three different layouts and weapon and personnel load outs that demand you play differently. Indeed, this is the true beauty of the game. There is no ‘right’ way to defeat FTL, merely a huge number of ways to approach the same problem. 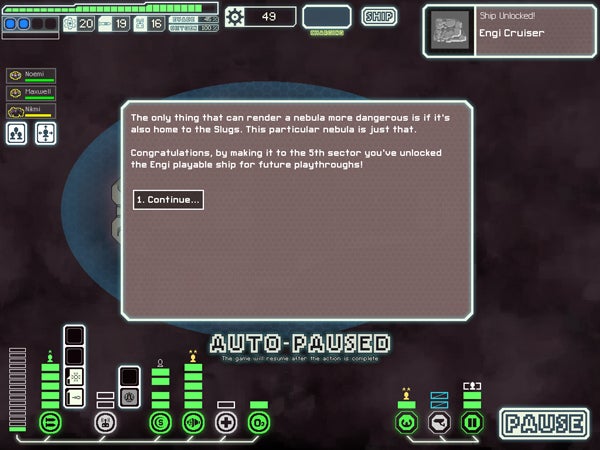 You can set yourself up as a war machine, heavy on lasers and missile launchers to pound the enemy into submission, or you could be a stealth ship that uses hacking to neutralise enemy systems.

Feeling a little evil? Acquire a teleporter and send your crew to kill the enemy and strip it for extra rewards. Feeling extra evil? Use firebombs and fire impervious Rockmen (one of six common races in the game) to burn them alive. 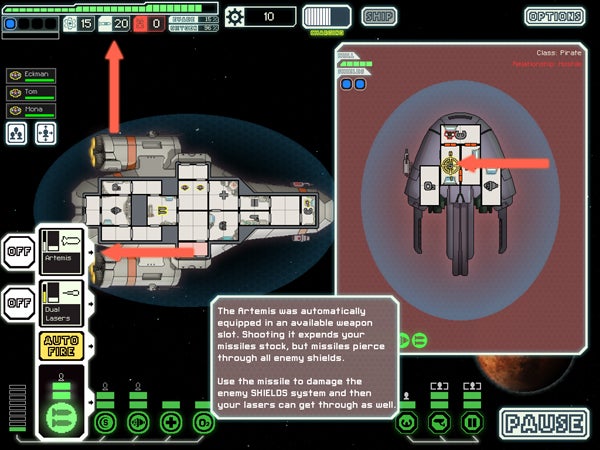 The six main races are just one of a huge number of variables to consider in the game. All but the humans (we are boring, apparently) have unique strengths and weaknesses; Engi can repair systems faster, but are weak in combat; Mantis are strong combatants but no good at DIY; Rockmen move so, so slowly, but have extra health and are impervious to fire. All these and more contribute to create one of the most replayable games you’re likely to find, and you could play it for 50 hours and not unlock all the ships and their layouts.

It’s also hard. Not brutal… or not most of the time at least. But every time you play is a game of risk and reward. Roll the dice and you could gain an extra crew member or an awesome weapon, or could you be boarded and have your favourite crew member brainwashed and turned against you. When you do finally ‘beat’ the game, however, the sense of satisfaction is immense and the desire to try again in a different way is irresistible. 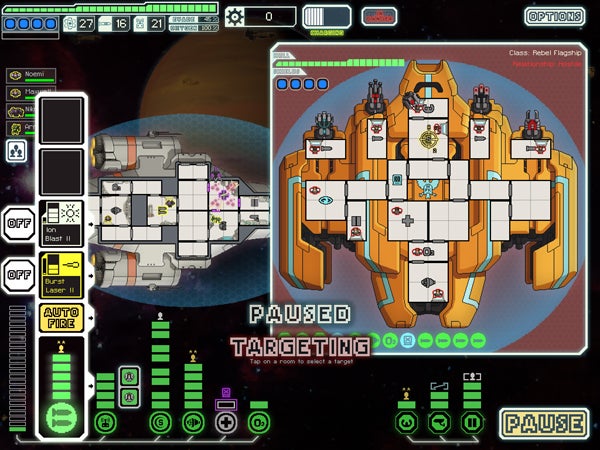 For seasoned FTL fans, FTL for iPad includes the Advanced Edition content that’s free to existing FTL owners on PC and Mac. It’s turned off by default, but if you know what you’re doing the new features make an already varied and challenging game even fresher.

There are numerous new weapons, augmentations, drones and abilities to spice up your approach to the game, including a new race, the Lanius. You can now man the blast doors and sensor rooms, too, adding a free upgrade to those system when manned, and there’s a handy ‘Return to Stations’ shortcut for when your crew is scattered to all parts. There are also new random events to deal with, though the six-legged horses remain. 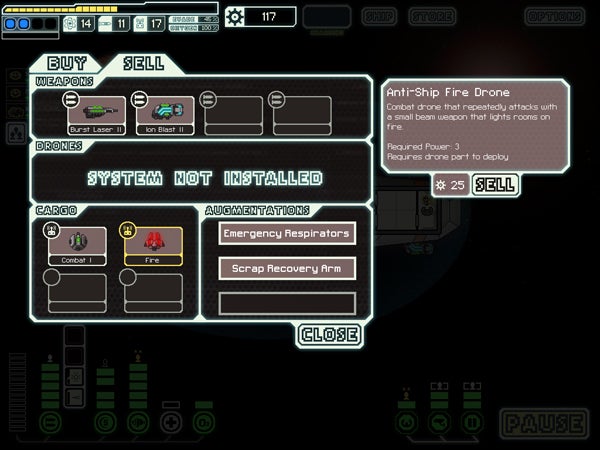 Vitally, FTL on iPad is incredibly easy to play. Subset Games has done a fantastic job making it easy to control using a touchscreen, so much so that iPad owners are unlikely to want to play the game any other way. Performance is faultless, too, though that’s hardly surprising given the graphics are deliberately basic.

A final word must go to the soundtrack, which includes a selection of extra tunes to punctuate the familiar ones from the original. It’s outstanding, so wear headphones. 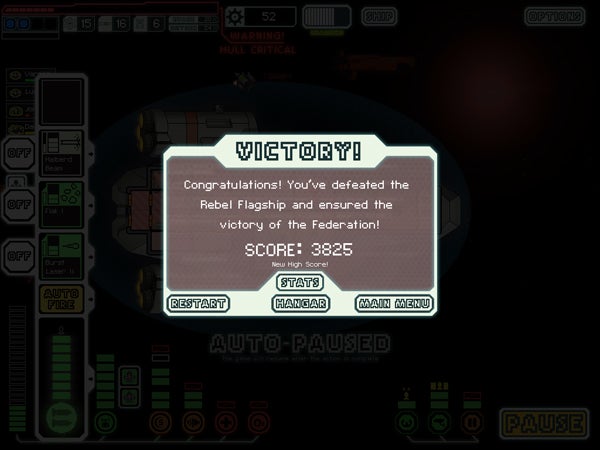 If you own an iPad and have any passing interest in gaming, FTL is a must buy. Even iPad owners who own the PC version should, particularly as FTL’s short battles make it perfect for quick ten minute plays whenever you feel like. It’s oh so easy to pickup for a short session and end up still playing hours later, though, which is precisely why it’s such a damn good game.