Frozen Synapse 2 is, ostensibly, a game about optimisation. In reality, it’s about the game’s PRIME button, and the terror it instills in everyone that clicks it.

There’s a cadence to the game’s tactical stage: as a player, you’ll plan and confirm a five-second turn in unison with either another player or the AI. The glowing figures lurking in the vivid blue battlegrounds below are yours to command or destroy, but whatever weird half-life these figures have, it can be ended in a second if you make a tactical faux pas. So, as a player you’ll replay the five seconds, again and again, optimising your plan, trying to idiot proof the next five seconds so that none of your friendly green figures die.

Then you click the button. PRIME. The turn unspools, and you find out that your plan was not idiot proof, and that people are dying. It’s probably your fault.

Unexpected failure, and occasionally unexpected success is Frozen Synapse 2’s bread and butter. It’s a unique selling point, and the thing that will keep you up late into the night, tweaking and replaying. 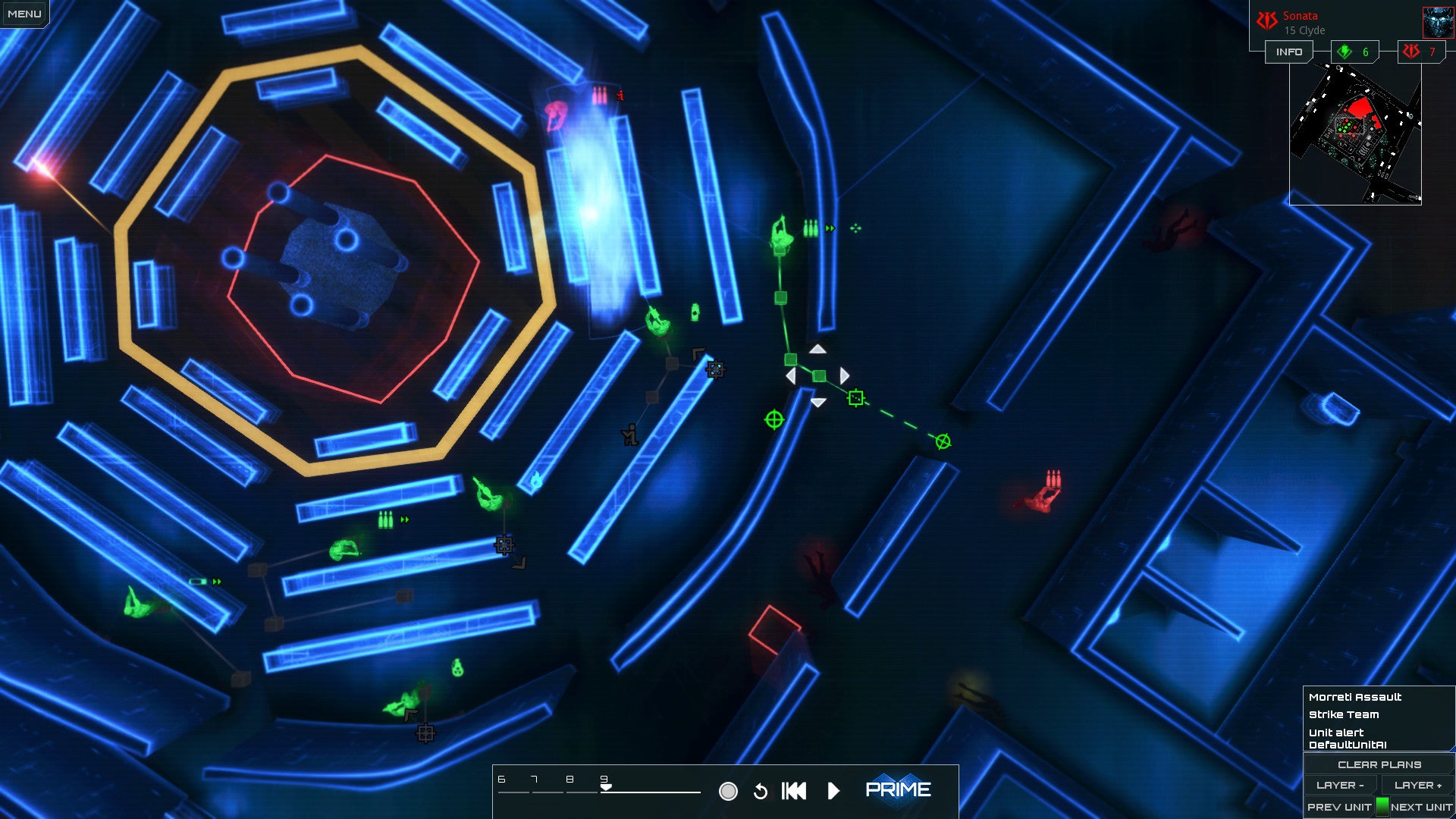 This isn’t dissimilar to Frozen Synapse, the tactics game launched by the same team all the way back in 2011. However, it’s been refined here, environments have evolved into blue-hued urban arenas instead of vivid blue virtual battlegrounds and they’ve added an XCOM Apocalypse-esque city-map for you to wage war over.

The cityscape is a bold reinvention of Frozen Synapse’s single-player content, tasking you as a faction on the brink of outright war. Your job, if you choose to follow the story – which is strictly optional – is to try and beat back the wave of Sonata incursions, a hostile force that shows up and alternates between massacring civilians and converting them, somehow, into Sonata troops.

The game layers its systems on you as you play. At first, you scuffle with Sonata, and factions will reward you for showing up and dealing with the chaos promptly with increased funding. Dawdle, and the inverse is true, leading to a cut in finances. Soon after this, factions will ask you to take sides, and you start to see that the factions are at each other’s throats, all grasping desperately for power. Who you take sides with will affect your bottom line, but could also make you a target. 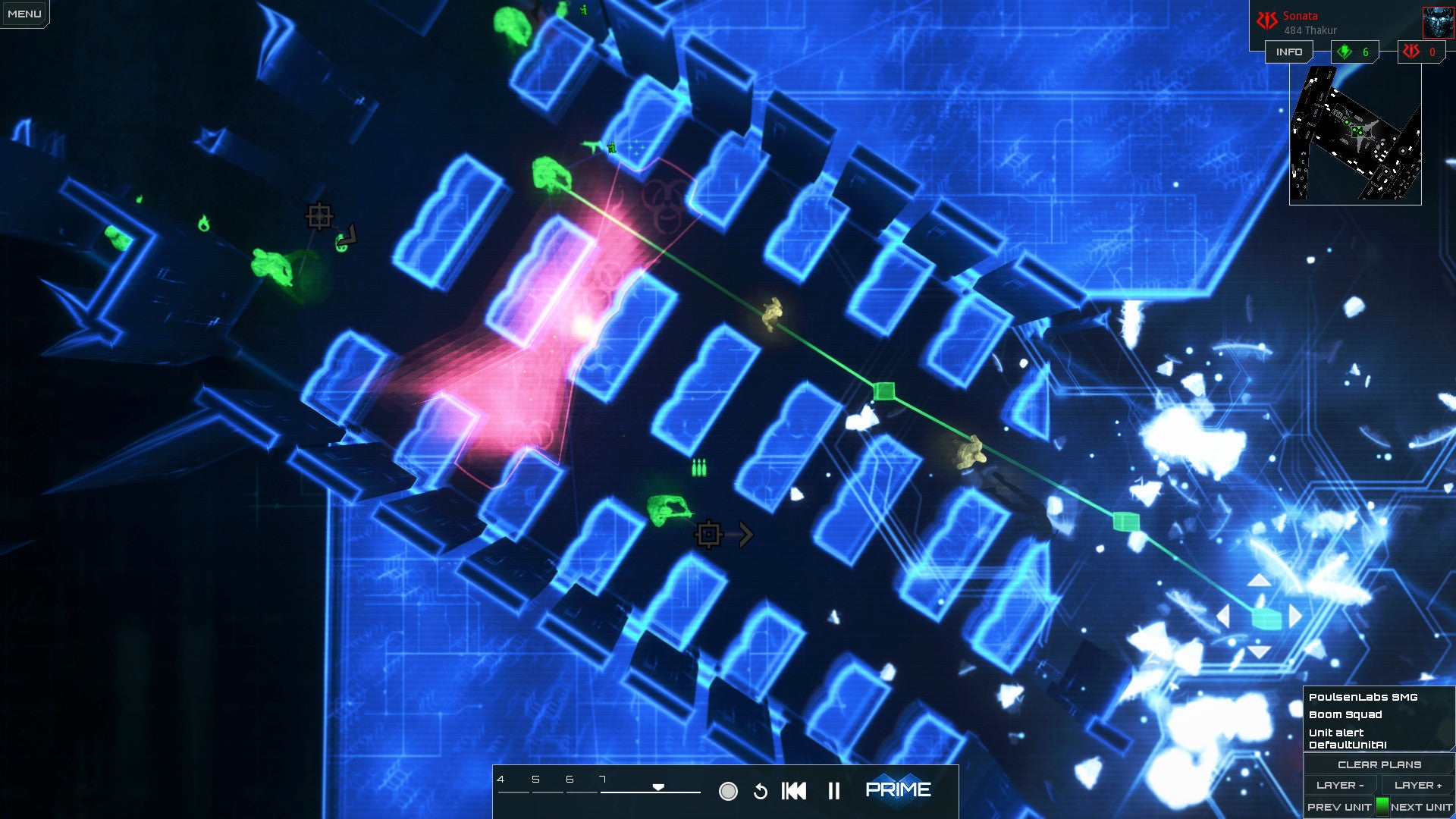 Then the game throws a curveball into the mix. Sonata can be controlled by whoever collects a certain amount of ‘relics’, dropped at the site of the Sonata incursions. This touches off the city-sized powder keg and suddenly every faction is attacking the others, the Sonata incursions and you, trying to get these relics for themselves. You’re also in it for the relics too, realising that with control of Sonata you can bring peace to the city and end the threat.

Against this backdrop you’re hiring mercenaries with a variety of different weapons, signing supplier contracts for things like ammunition, rockets, fuel for your vehicles and even biomass – essential for regrowing dead mercenaries – in addition to buying new buildings to use as bases and in some cases even taking aggressive action against the other factions in the cities to clip their wings, limiting their power.

It’s an involved and complicated game, hampered by a confusing cityscape UI. These challenges aren’t signposted very well and this can lead to a fail state which can force you to restart. In addition, the city doesn’t have a wealth of depth, and so you can often be left simply fast-forwarding time, whether this is because you’re waiting for your soldiers to regrow after death as you’re too weak to fight, or because there’s simply nothing going on for you to actually do.

Despite the city’s missteps, The tactical combat is as good as it’s ever been, and the addition of several new unit types means there’s more tactical depth than before. In some cases, as with the toxic grenades, flamethrowers or miniguns, this creates fascinating strategic opportunities to be taken advantage of against both other players and the AI. However, in a couple of cases, it pairs with the game’s reasonably bad interface and some clunkiness to frustrate. 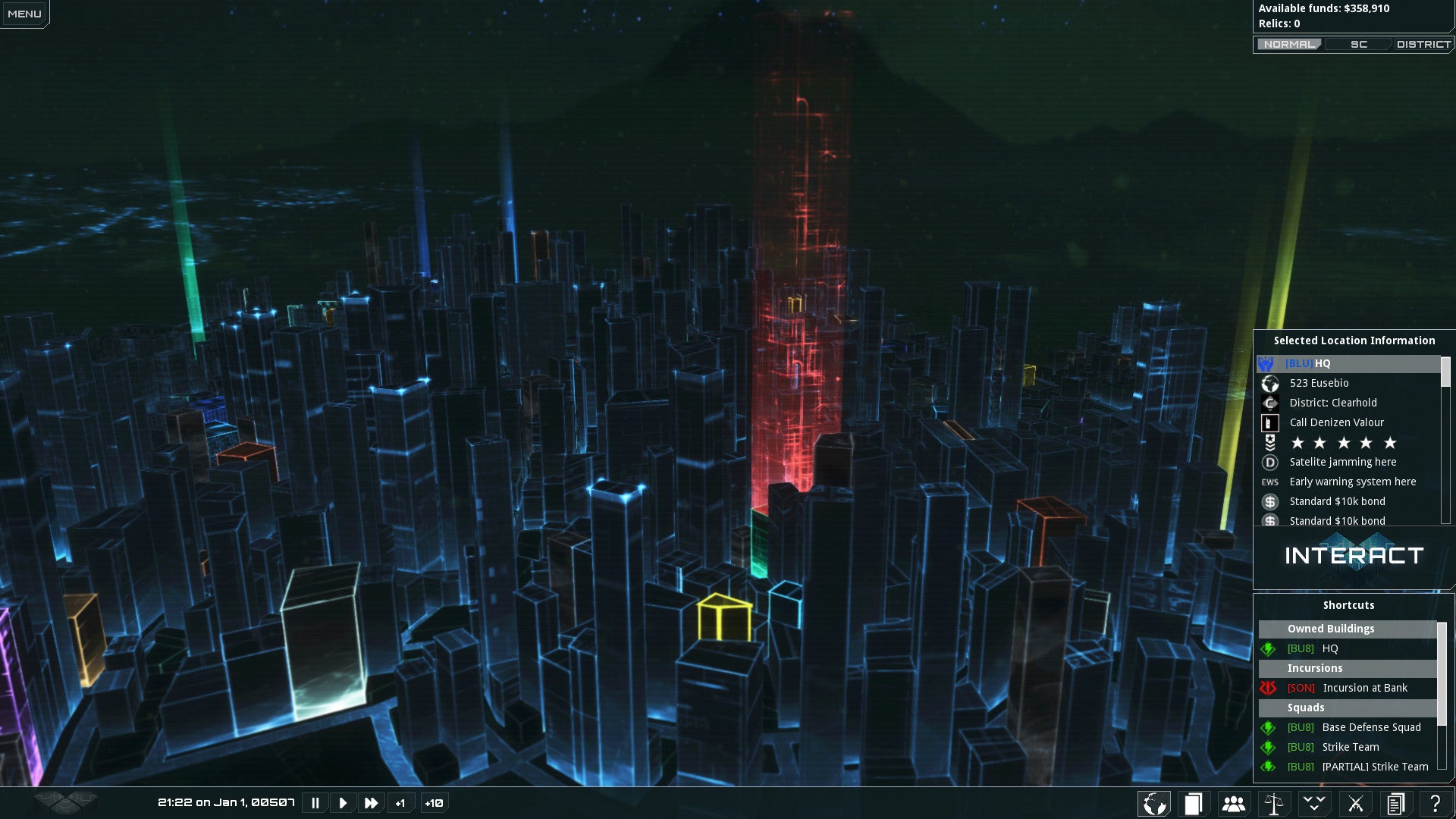 This is primarily the case with the knife-wielding soldiers, which can run incredibly fast to a location and deliver an instant killing blow to whoever they come into contact with. However, you can’t turn them loose, as you need to give them the same rigidly defined paths as the rest of your troops. Because of the simultaneous turns, by the time your knife attacker has reached the point where they were, it’s now empty space, and often this leads to them getting shot down by their would-be victim, safely standing three steps away.

The music underpinning the game is sublime, and the aesthetic of the game sets it apart from many others in the tactics genre, unfortunately, the actual interface is confusing and filled with options. These options all have a function and an optimal time to use them, but it means the learning curve for the game is close to vertical.

Frozen Synapse can be clunky, frustrating and terrifying in equal measure. The tactical level is tightly balanced and, when played competitively provides a real spectacle, even when it’s your soldiers that are getting wrecked.