This is AVM’s attempt to break the mould. Having produced a slew of highly competent routers with integrated DSL/cable modems, the German company is now branching out in the mobile spectrum. As the name suggests, the ‘6840 LTE’ connects to a wireless 4G signal rather than a fixed line and – despite a substantial price tag – AVM hopes it will help usher in a new era in networking.

No-one could accuse AVM routers of lacking character and the 6840 LTE continues the company’s fine line of distinctive red and silver Thunderbirds-style designs. At 210 x 155 x 25 mm it is surprisingly compact, but in every other regard this is a typical AVM bit of hardware.

The good news is that extends to the solid build quality, though the flashing green activity lights are a bit old fashioned and we aren’t fans of the company’s decision not to include a dedicated WPS button. Instead AVM has a wireless on/off button that you hold down to activate WPS – it is needlessly obtuse.

Despite this, overall the 6840 LTE is a decent looking router that continues the AVM tradition of trying to look a little different, even playful. 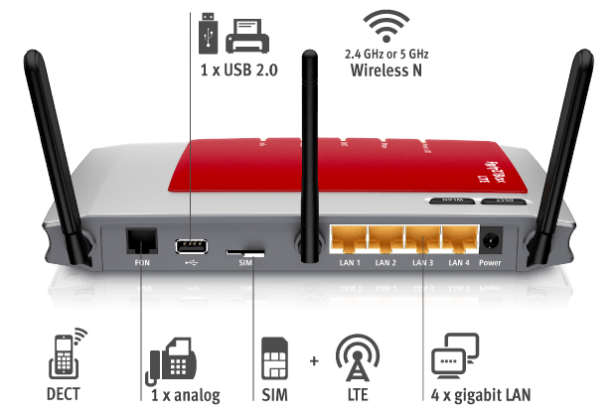 The obvious headline aspect to the 6840 is its LTE connectivity and thankfully AVM has employed triband support which covers the full UK spectrum (800-2600MHz). In short: if 4G is available in your area (and that will depend on your particular network) the 6840 LTE should find it. Furthermore the router is not locked to any particular network and it takes a standard, full size sim.

Elsewhere, however, the 6840 LTE starts to come unstuck. Basics like WPA/WPA2 security, IPv6 support and four Gigabit Ethernet ports are in there along with a single USB 2.0 port, but its wireless implementation leaves a lot to be desired.

For starters AVM has fitted the 6840 LTE with only 802.11abgn rather than the newer (and increasingly ubiquitous 802.11ac) which is a surprise at this price point. Furthermore while the router supports 2.4GHz and 5GHz bands it cannot use both simultaneously instead defaulting to 2.4GHz if both 5GHz and 2.4GHz devices are connected.

In AVM’s defence LTE speeds shouldn’t exceed the peak performance of 802.11n 2.4GHz, but as a fixed router with a dedicated power supply it greatly limits performance at range and also means you cannot stream local content on different bands simultaneously.

For the record you can get the 6840 LTE to return to 5GHz by changing the router’s settings (‘advanced view’, ‘WLAN’, ‘Radio channel’, ‘Adjust radio channel settings’) but that is a faff and means your 2.4GHz devices cannot connect. We’ve never seen this either/or system in a dual band router before and we hope never to see it again.

Strangely, despite implementing such limited WiFi, AVM has then equipped the 6840 LTE with DECT functionality for pairing a home phone or FAX. Personally we’d have happily foregone this to see more spent on better wireless.

Despite being highly impressed with past FRITZ!Box routers, we have long found setup to be their Achilles heel and this is again the case with the 6840 LTE.

In a nutshell: it is far too complex. For example, by default guest access and the USB port are disabled by default. This is less infuriating than other models which also limit Gigabit Ethernet to Fast Ethernet and use a single SSID by default (splitting the latter is impossible with the 6840’s wireless implementation), but it still means digging around in the complex UI for some time.

The basic setup itself isn’t flawless either. You connect to the router (inevitably switching your WiFi off once or twice trying to enable WPS) then manually open your browser and type in either http://fritz.box or 192.168.178.1 which begins the setup wizard. The wizard is perfectly fine, but again it doesn’t let you know about all the standard functionality that is disabled – you discover that through trial and error.

None of which is to say the AVM user interface is limited. In fact the opposite is true: it is amongst the most detailed and comprehensive we have seen. The problem is it is also one of the most impenetrable we have seen for a standard user and its standard/advanced views do little to help that. Compared to the UIs from D-Link and Linksys in particular the FRITZ!Box range urgently needs updating.