Introduction
No sooner had we arrived back from IFA 2012 than we were dragging ourselves out of bed at stupid o’clock to head to a London breakfast meeting with free-to-air UK satellite broadcaster Freesat. But we really didn’t mind, for on the agenda was our chance to get a first look at Freesat’s brand new ‘catch up’ service.

Dubbed Freetime, Freesat’s catch-up system essentially seeks to deliver the same ‘rewind your electronic programme guide’ functionality for satellite viewers that the recent YouView box delivered to Freeview viewers. In other words, it lets you look back seven days on the EPG as well as looking seven days forward, so you can easily find, and stream from the internet, programmes you might have missed. 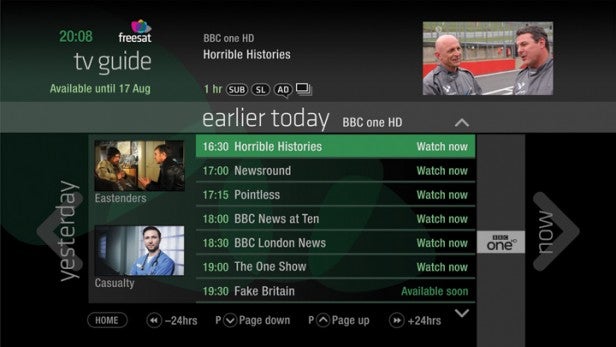 During the launch demo only two broadcasters were supporting Freetime: the BBC and ITV, via their respective iPlayer and ITV Player services. But channels 4 and 5 are both set to launch their catch-up support as well before Christmas. Freesat is also promising to have some subscription services – the likes of Netflix and LoveFilm – live on the platform at some point.

Humax again
The hardware Freetime is being launched on is, seemingly inevitably, built by Humax. It’s a surprisingly large box, but is saved from ugliness by a very glossy black finish and some striking if slightly random curves and bulges in its sculpting.

The box supports DLNA multimedia playback and playback of photo, video and music files from USB sticks alongside its expansive new satellite catch-up features. It also sports a very healthy 1GB of built-in recording memory, as well as a further 256MB of flash memory.

No Wi-Fi
However, as with the first-gen YouView box, rather bizarrely the Freetime box doesn’t carry built-in Wi-Fi. You can add Wi-Fi connectivity via an optional USB dongle or by investing in a powerline Ethernet system. But surely any box that relies on internet connectivity for a fundamental part of its functionality should have Wi-Fi as standard these days?

Focussing next on the real meat of Freetime, its onscreen menus, things look up considerably. Right away, for instance, we were struck by the service’s clean, uncluttered presentational style. It’s really nice, too, to find Freesat colour coding each of the numerous menu options, helping you always be aware of where in the menus you are at any given moment.

The size of the text is perfectly judged, meanwhile, allowing a decent amount of information, and channel choices, to appear onscreen at once without anything becoming illegible. Then there’s the impressive layout, as the menus manage to juggle without looking messy a smaller version of the picture alongside plenty of channel information and some extremely well considered navigation links.

User-friendly shortcuts
These links include stuff like ‘Showing Again’ searches for a programme for when you have, say, just missed the start of the current screening. It’s touches like this that take huge amounts of legwork out of the user’s experience, as well as making it more likely that users will engage with all the features the box has to offer.

Particularly impressive during our hands-on with the new Freetime box were the key next/past EPG and a ‘Showcase’ area. The EPG works quickly and seamlessly in allowing you to delve into the past as well as the present and future, with the streaming kicking in so quickly if you select an archived programme that you don’t really feel aware of the IP ‘join’. Excellent.

Now/Next option
The introduction of a Now/Next EPG option is also a great touch, recognising the ‘spur of the moment’ approach more and more of us now take to our TV viewing.

Series link is supported, naturally, and the box will automatically inform you of HD options for a programme you’re interested in as well as recording clashes.

The bottom line with any catch-up box EPG is that it should make the difference between live and internet-delivered content as invisible to the end user as possible. And it’s hard to see how Freetime could have achieved this seamlessness any better. 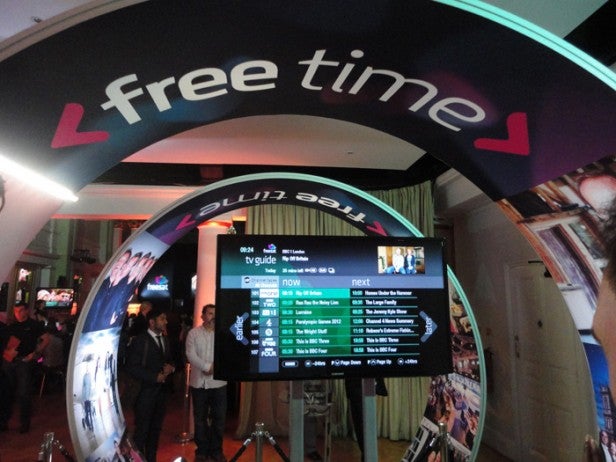 The Showcase section is much better developed than most similar services tend to be. The programme options we were presented with were much more likely to interest your average TV user than the obscure ‘sponsored’ stuff sometimes seen on rival ‘showcase’ systems. The sheer flexibility provided over how you consume or timeshift the showcased items is impressive too.

No TiVo – but fair enough!
All that’s missing, really, is some kind of learning system whereby your recommendations can become more tailored to your viewing preferences. But this, of course, would shift you into TiVo territory, and this was never likely to appear on a box that costs £279 with no extra subscriptions.

Aside from the missing built-in Wi-Fi, we came away from the Freetime launch feeling seriously impressed with what Freesat’s new box of tricks can do. We’d been having a few doubts lately about the long-term viability of Freesat now that Freeview is so widespread and offering HD, but thanks to Freetime, Freesat is not only very much back on our agenda but something that Sky might need to get seriously worried about.