What is the Francesco Pellisari Zemi Aria?

The Francesco Pellisari Zemi Aria is a luxury wireless speaker. As much a piece of striking lounge furniture as audio hardware, it’s no wonder this speaker has been welcomed into the Apple Store catalogue.

It costs £499, and is among the pricier wireless speakers on the market. The quality matches the price in most respects, but this speaker isn’t going to be the perfect fit for everyone, particularly Android owners. 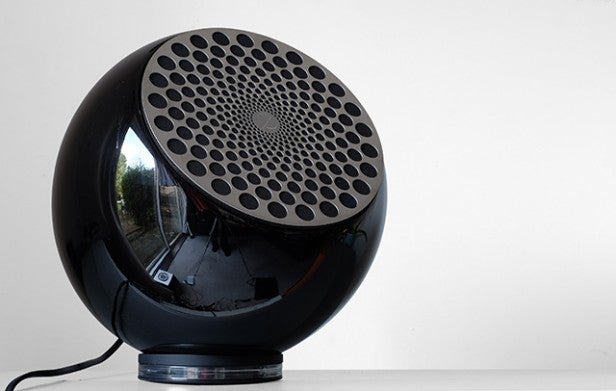 The Francesco Pellisari Zemi Aria is one of the most striking speakers you can buy right now. I recently reviewed the Naim Mu-so Qb, which I described as something of a sophisticate; the Zemi Aria makes it look like a wallflower.

It’s the speaker equivalent of Eero Aarnio’s iconic Ball Chair from 1963. Just Google it to see what I mean.

The ball part isn’t attached to the base, which is a ring of vibration-absorbing foam and acrylic. You can carry the Francesco Pellisari Zemi Aria under your arm like a very big, very expensive bowling ball if you like. A separate base lets you angle its shiny face to the best position in your lounge. 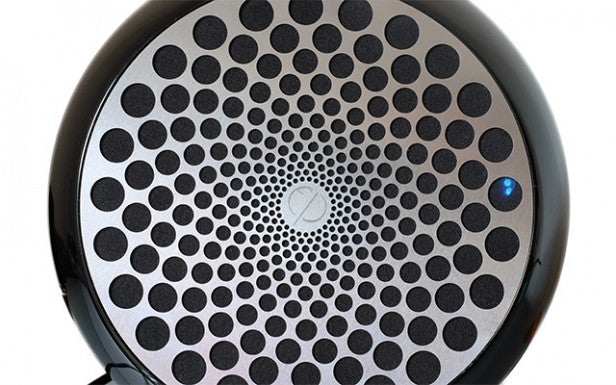 That eye-catching grille is the one part of the Francesco Pellisari Zemi Aria’s exterior that is metal. The actual “ball” is made of high-gloss piano-black plastic. Pellisari told me there’s a seam on it, but you’d be hard-pressed to find it. This is a spectacular-looking speaker, much as I can imagine some of you being turned off by the sheer “look at me” factor of it.

The Francesco Pellisari Zemi Aria can be toned down, however. Its silvery grille is held in place by magnets, sitting atop a much plainer fabric grille. Remove it and the Aria will blend in a little more.

It’s possible to take of this fabric grille, too, to reveal the drivers, but it doesn’t look as good and is a sure-fire way to end up damaging a tweeter. 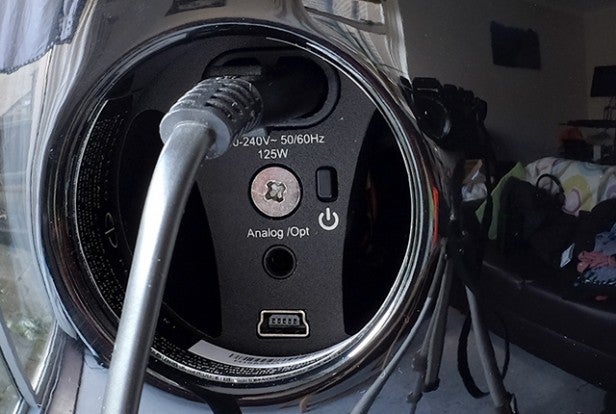 The Francesco Pellisari Zemi Aria’s connections all sit at the rear of the ball. There’s a clever cut-out that holds the figure-of-8 adapter socket, the power button and the 3.5mm aux input that will take both analogue and digital cables. This is a speaker you could plug into a TV or other, older audio devices if need be.

Wi-Fi and Bluetooth with aptX feature on the wireless side, but it’s here that the Francesco Pellisari Zemi Aria slips behind much of the competition at this price. Wireless abilities are quite basic.

To hook up your phone over Wi-Fi you need to a USB adapter – which is included in the box – to physically connect your iPhone or iPad to the ball and then share the network access details using iOS. It’s simple enough to do, but it feels a little dated compared to the offerings of other speakers – and it doesn’t work with Android. 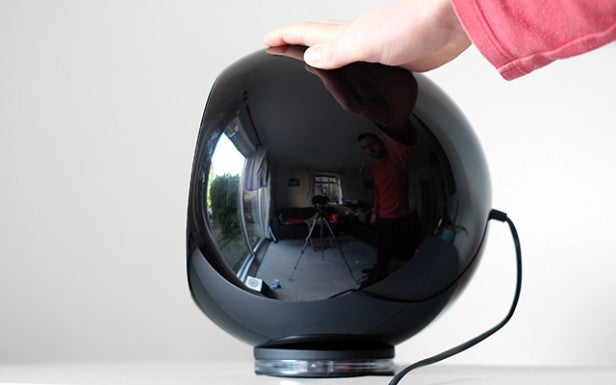 Android and Windows phone users have to use Bluetooth instead, which offers lower-quality, more rudimentary streaming – even with aptX. The Francesco Pellisari Zemi Aria is a speaker made with iOS devices in mind.

In addition, there’s no app, no multiroom functionality, no possibility of stereo pairing – and to actually get to maximum volume using any input you have to use the included metal remote. This isn’t ideal when the “standard” loudness isn’t actually all that loud.

While the remote has a similarly expensive vibe, with a thick aluminium shell and just three buttons on its top, design-wise it doesn’t live up to the speaker itself. The company logo sits on a sticker rather than the actual remote, for example. 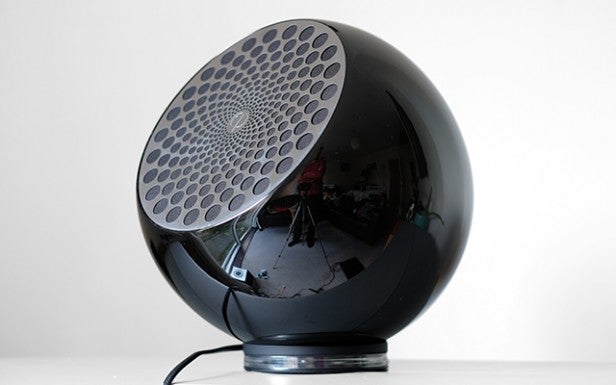 Today’s trend among wireless speakers is to use a whole army of drivers and passive radiators, each responsible for different parts of the frequency spectrum, but the Francesco Pellisari Zemi Aria is more like a traditional speaker. There’s one large driver in the middle that claims the “ball” as its speaker cabinet, and a pair of tweeters that are angled inwards.

As many clever engineering tricks have to be pulled off to make a style speaker such as this work, the Francesco Pellisari Zemi Aria uses fewer “cheats” than most wireless speakers. There are pros and cons to this style. 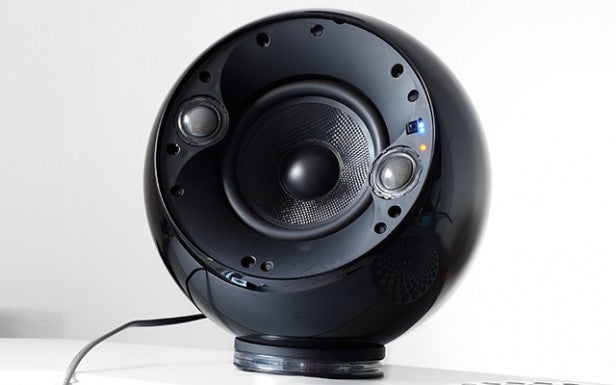 At the right volume, the Francesco Pellisari Zemi Aria sounds great, and doesn’t suffer the issues that some of the alternatives display with pushing out mid-range information. This is one of those speakers that sounds better when you start working the driver a little, something that’s generally true of most “proper” hi-fi speakers.

It can also achieve loud volumes without sounding strained, with its sense of energy only increasing as the volume is cranked up. Tonally it’s solid too, aside from perhaps a little extra mid-bass that can obscure the texture of some vocal tracks at certain volumes.

However, it’s much less of an all-purpose speaker than many of its rivals. At lower volumes it loses much of its energy, lacking some of the dynamics and bass clout you’d achieve from a speaker using passive radiators. Aside from making it possible to get good bass out of a small box, radiators also let you maintain a decent level of bass without working your main drivers too hard. 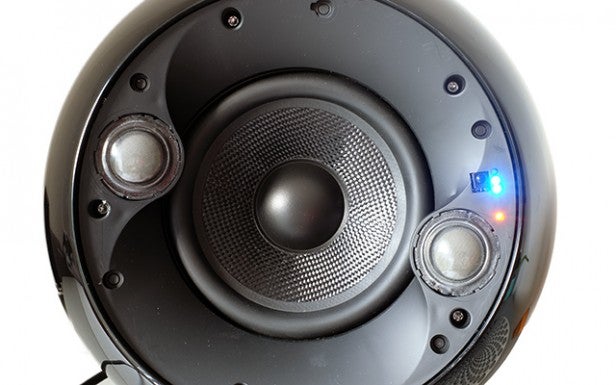 At the sort of volumes at which you may choose to listen when unwinding, the Francesco Pellisari Zemi Aria sounds a little ordinary, lacking the instrument separation you get at higher volumes.

The Francesco Pellisari Zemi Aria is also one of the most positional wireless speakers in this class. Where the majority of wireless sets apologise for not being stereo by firing out sound in all directions, it isn’t hard to pinpoint where the Zemi Aria is sitting in a room.

This results in the sound lacking width and scale, until you raise the volume to a decent level. It’s more obviously “mono” than I’d like to hear from a £500 speaker in this class. Side by side with the Naim Mu-so Qb, the latter sounds far fuller, more powerful and less constrained at low volumes. With dance music, for example, there’s very little power behind the beat in the Zemi Aria at low volume, where the Qb can get you wanting to move even at volumes over which you could hold a polite conversation. 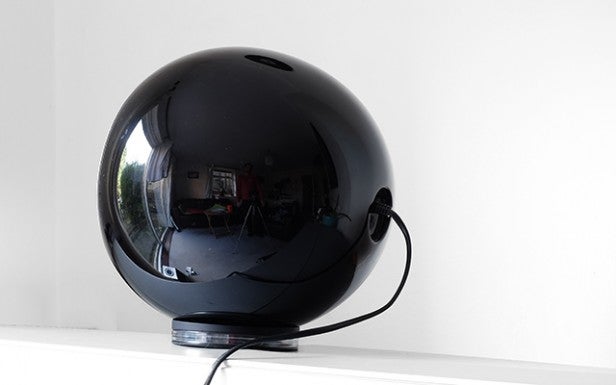 Should you buy the Francesco Pellisari Zemi Aria?

The Francesco Pellisari Zemi Aria is a speaker made by a speaker maker rather than a designer. From this end at least, it tries to make as few compromises as possible, and can sound great if you’re able to turn up the volume a little.

However, there are a few too many compromises at the buyer’s end to make this among the best wireless speakers available, particularly at £500.

It lacks any advanced features and offers only minimal support for devices outside of Apple’s catalogue. And, more importantly, its sound quality varies a little too widely depending on the volume. If you have to keep things at a reasonable volume, the Zemi Aria just can’t muster the scale and punch of most other units at this price.

The Francesco Pellisari Zemi Aria makes a true visual statement  – but fails to capitalise on the technological developments that have been seen in wireless speakers in the past five years.