Last week we reviewed the Foxconn Blood Rage Gti that costs £223 and now it’s time to move our sights below the £200 mark as we take a look at the Foxconn Flaming Blade. The main difference between the two models is that Blood Rage and Blood Rage GTi support four PCI Express 2.0 graphics slots. Blood Rage offers 16 lanes of bandwidth per card if you employ dual ATi or Nvidia cards although that figure drops to eight lanes per card if you pack out the board with four graphics cards. 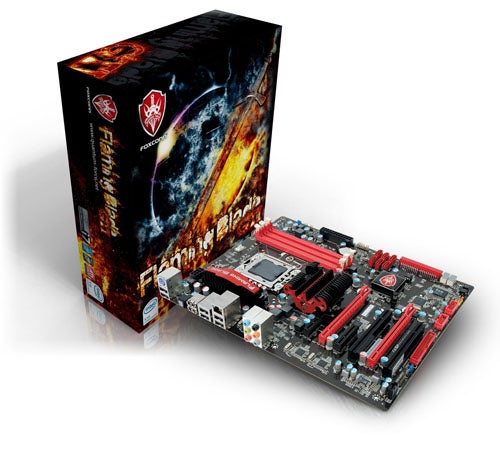 
That’s the most obvious difference between Blood Rage GTi and Flaming Blade but you’ll spot other changes if you look closely. For instance, Blood Rage GTi comes with a Sonar X-Fi audio riser card that connects to a dedicated header on the board while Flaming Blade takes the more conventional route as it uses an on-board Realtek ALC888 chip. This makes the I/O panel look considerably more cluttered than the lean Blood Rage GTi as Foxconn has added six analogue mini jacks alongside the eSATA, eight USB ports, dual LAN, keyboard PS/2 port and the digital audio connection. 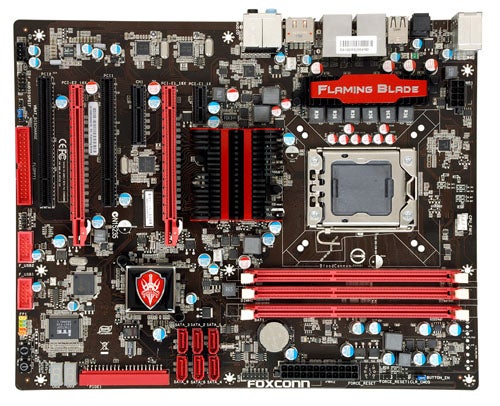 This is where we start to see detail changes between Blood Rage GTi and Flaming Blade that have no apparent reason but which may well affect your buying decision. In this case Blood Rage GTi has a coaxial S/PDIF connector on the I/O panel while Flaming Blade has an optical connector. We’re not especially fussed whether a manufacturer offers optical or coaxial digital, although we’d be happy to see both types on every motherboard. What does concern us, though, is the lack of consistency implies that Foxconn isn’t especially fussed which type of connector it uses just so long as it can slap a ”digital audio” logo on the box.

Something similar has occurred on the other side of the board where the positions of the SATA and IDE connectors have been swapped around and once again we can’t quite follow the logic. On Blood Rage GTi both the IDE and SATA connectors are laid down and as a result you can connect the cables with the minimum of fuss. Flaming Blade moves the IDE connector down the board and as it is laid down it remains simple to use however the six SATA connectors have been changed to the older type that stands vertically. At least the SATA connectors on Flaming Blade are located above the primary graphics slot where they are out of harm’s way and while we prefer the convenience of laid down connectors we have to admit that both approaches work. The problem, once again, is that it suggests that Foxconn doesn’t have a firm view on the subject unless it is merely a way of saving a few cents on the cost of components.


One clear sign of cost cutting is the change in power regulation hardware between the two models. Blood Rage and Blood Rage GTi have 12+2 power phases with nine phases up the side of the CPU socket and five across the top with the passive cooling system covering all of the hardware. By contrast Flaming Blade (the GTi model doesn’t appear to be on sale in the UK) has six phase power up the side of the CPU socket with two more phases near the Northbridge. This change means that the chipset cooling system on Flaming Blade is more compact than the one on its big brother and it uses one less heatpipe. That must shave the cost a little and it also opens up the area at the top of the board around the eight-pin EATX power connector but the use of less sophisticated hardware also reduces performance a tad. The Flaming Blade ran our Core i7 965 Extreme at a base clock speed that was 10MHz lower than Blood Rage GTi with the result that the CPU speed was 3.78GHz instead of 4.05GHz. Not, we must confess, a huge difference, but it’s enough to be noticed. 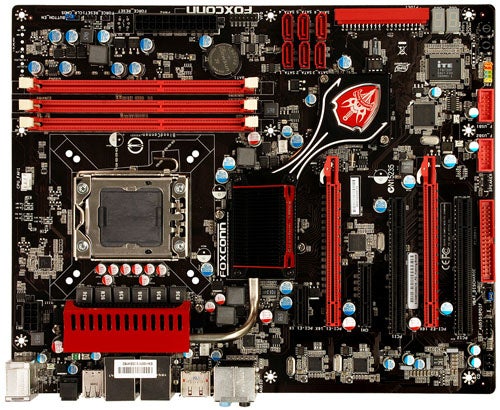 Some of the other features that we liked about Blood Rage GTi have been carried over to Flaming Blade including the illuminated Power and Reset buttons down by the LCD POST debug display. You also get the illuminated Clear CMOS button on the I/O panel and the Force Reset button that clears failed overclocking attempts. During our testing we were sent a revised BIOS file by Foxconn that took the board from version P05 to G25 – no, we have no idea how Foxconn’s BIOS numbering system works either. The release notes for the revised BIOS make for dull reading and include such gems as:


However we took note of the change that flags up the imminent Core i7 950 processor.


It feels as though Foxconn is polishing the BIOS of Flaming Blade and isn’t making any dramatic changes so you probably shouldn’t expect any leaps in performance in the near future.


Flaming Blade is a relatively cheap Core i7 motherboard that packs in enough features to appeal to serious gamers without including the sorts of luxuries that raise the price sky high.