Foxconn’s Destroyer arrives in a hefty box that includes the ATX motherboard, manual, driver disc and a stack of IDE, floppy and SATA cables. It also comes with a number of intriguing extras such as a clear plastic board that is drilled to accept the supplied brass motherboard mounts. Fit the mounts and you can plug your Destroyer together for a dry run on the bench before you install it in your case. Most motherboards will happily sit flat on a table top but the Destroyer needs support to raise it slightly thanks to the second accessory. 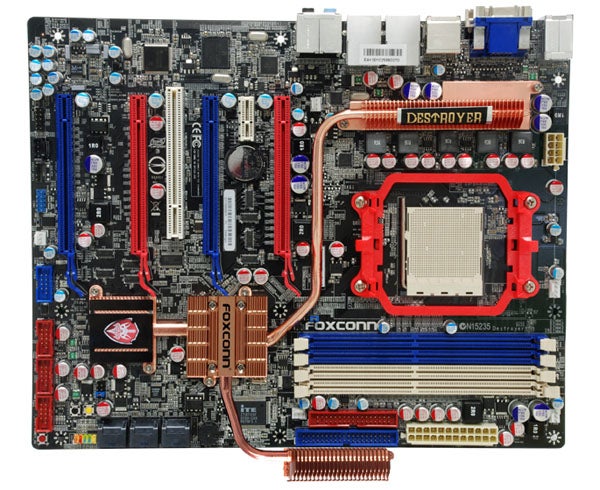 This is the Heat-Pipe expansion module which screws to the Northbridge cooler and then hangs off the back of the motherboard behind the power and IDE connectors. We’re all in favour of extensive passive cooling systems that help to keep the chipset and power regulation hardware under control but this is the first time we’ve seen an add-on that sits outside the footprint of the motherboard. The reason is simply that there is nowhere else for Foxconn to locate a cooler as the layout of the board is dominated by four PCI Express 2.0 slots. There’s not much space around the CPU socket but even so it appears that Foxconn might have included a cooler along the lines of the Gigabyte EP45 Extreme or it could have taken a leaf out the book of the MSI K9N2 Diamond.


Having said that the Heat-Pipe expansion module (couldn’t they do something about that name?) is effective and helps to keep the chipset reasonably cool. If the cooling needs some assistance you can reach for the third extra in the box which also suffers with a lousy name.


This is the Quantum Flow-GPU blower which is a 120mm case fan with a neat mounting bracket that attaches to one of your graphics cards to blow cooling air across the motherboard. The fan runs at high speed and made so much noise that we felt obliged to add a fan controller. Once we’d done that the results were very impressive. 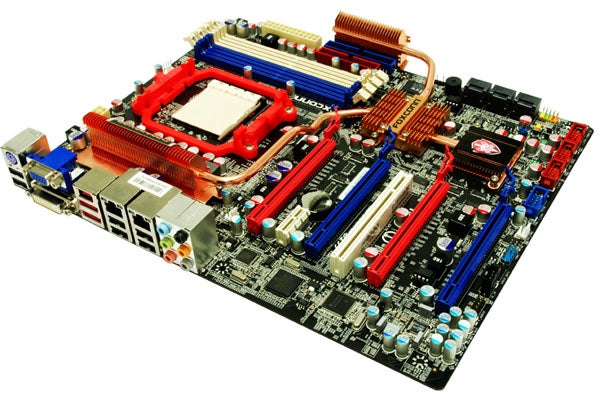 The fact is that these add-ons all have their root with Nvidia. The 780a chipset is relatively toasty yet the four PCI Express slots for Quad SLI mean that the chipset cooler has to be incredibly low in profile to ensure that you can pack in the graphics cards without problem.


That’s an impressive range of options but it highlights that the key feature of the Destroyer is the combination of SLI graphics with a Phenom processor. Quite simply, Intel rules the roost in terms of CPU performance so why would anyone use a slow CPU when they’re using four graphics cards? This is ultra-high-end computing so it should use all the best stuff, surely? The only possible answer to that question centres on a clique of AMD fan boys who refuse to use Intel no matter the strength of the evidence.

The layout of the Destroyer is dominated by the graphics slots while the I/O panel has to give up a certain amount of space to the VGA and DVI-D ports that are connected to the integrated 780a graphics. We don’t want to sound like we have a downer on Nvidia but the inclusion of integrated graphics on a high end motherboard to enable HybridPower feature seems like a complicated way to save power. The way it works with a limited range of graphics chips from GeForce 9800 onwards is annoying.


The inclusion of the two graphics ports means that the I/O panel is completely filled by six USB 2.0 pots, two eSATA, one Firewire, one PS/2, six audio mini jacks and dual Gigabit LAN. In fairness that’s not a bad selection of ports but Foxconn has included optical and coaxial S/PDIF ports on one bracket and two USB and a mini Firewire on a second bracket, just in case.

We can’t complain about the list of features but the performance of the Destroyer left us cold. We used a Phenom X4 9750 in testing which is a locked, quad-core processor and found that the maximum change we could make to the base clock was an increase from 200MHz to 210MHz. That is no reflection on Foxconn as the Quantum BIOS is very well specified for overclocking. The problem is that – in our experience – Phenom doesn’t respond to overclocking unless you link it to the latest AMD chipset with an SB750 Southbridge so by definition that excludes the Nvidia 780a. An unlocked Phenom X4 9850 would undoubtedly have delivered more performance but the extra heat that this processor generates is unwelcome.


When we reviewed the MSI we had to consider Core 2 as the main competition to Phenom even though Core i7 was on the roadmap. We have to confess that we’ve had the Destroyer on the test bench for some time but it was put on hold by the arrival of Core i7. That’s important because it changes the context of the Destroyer, in particular because Core i7 can work with SLI. 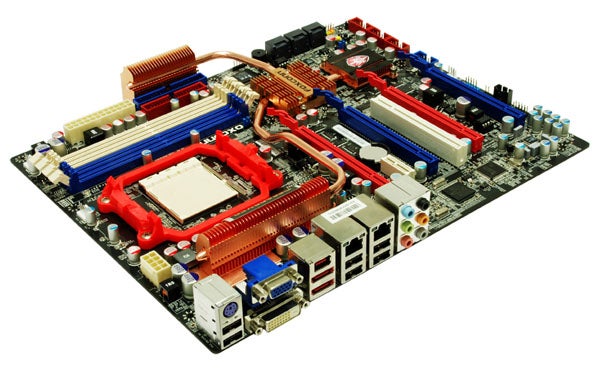 
If you’re determined to build a Phenom gaming rig we recommend the Asus M3A79-T Deluxe as the AMD chipset gives some scope for overclocking, it supports a more sensible but still plentiful number of graphics cards and the price is right. If, however, you want SLI graphics it’s Core i7 all the way.


On paper the idea of combining Phenom with SLI may look promising but it doesn’t work well in the real world. The cost is high while performance is low and that’s a horrible combination.