You won’t guess it from the model code but the Foxconn A7DA-S uses the new AMD 790GX chipset. This is an interesting piece of silicon that you can think of as a 790X chipset with the addition of the Radeon HD3200 graphics core from the 780G. Adding a relatively feeble graphics core to a chipset that is capable of CrossFire may sound like a strange idea, but there is method to AMD’s apparent madness as the 790GX effectively offers you two motherboards in one. 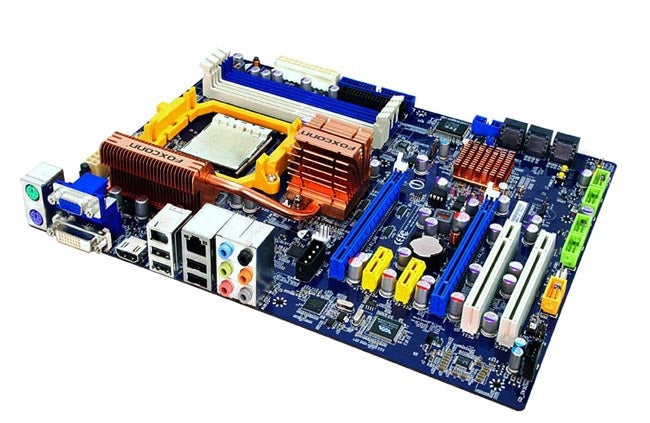 If you’re building yourself a Media Centre, office machine or a relatively basic home PC then you can use the integrated graphics without the need to splash out on a dedicated graphics card. Indeed, though specification of the Radeon HD 3300 graphics core appears identical to the HD 3200 core in the 780G chipset as it has 40 Unified Shaders, a 32-bit memory controller, supports DX 10.0 and runs at 500MHz, AMD claims that HD 3300 offers up to 30 percent more performance than HD 3200. How can this be?


In this case the answer lies in the graphics memory. 780G/HD 3200 uses shared system memory that GPU-Z reports as running at 500MHz with bandwidth of 4.0GB/sec. By contrast HD 3300 memory runs at 700MHz with bandwidth of 5.6GB/sec, but as we understand it that isn’t entirely true. 790GX adds a feature called SidePort, which is on-board memory for the graphics. In the case of the Foxconn A7DA-S (the S suffix stands for SidePort) it’s 128MB of DDR3, however early samples of the Biostar TA790GX A2+ have 64MB of DDR3. If you buy the basic Foxconn A7DA you don’t get SidePort, but as things stand that doesn’t matter as the current crop of ATi drivers don’t support SidePort and in our testing 790GX had exactly the same performance as 780G. 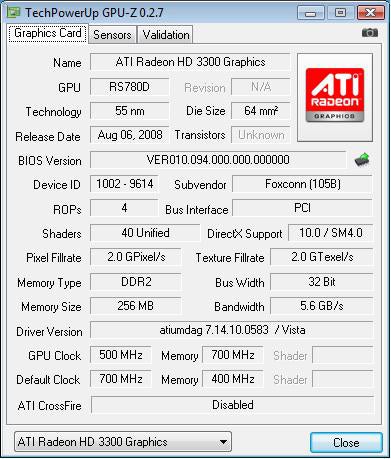 That’s something of a let-down, but we were encouraged when we plugged in an HD 3450 graphics card to test the Hybrid CrossFire feature and found it was enabled by default. Previously you had to install the graphics card and then enable CrossFire but with 790GX it’s a one-step operation. At present you can only use an HD 3400 series graphics card in Hybrid CrossFire as per 780G, but you have to assume RV710 and 730 will also be included once they have been launched.


Other features of 780G are carried over to the 790GX so you get ATi’s superb video decoder, a choice of display outputs – on the Foxconn there are VGA, DVI and HDMI – and you can install any AMD dual, triple or quad core desktop processor.

So the first shiny new feature in 790GX doesn’t currently work but thankfully there’s another new feature to maintain our interest: the SB750 Southbridge. Ordinarily we’d say that a new Southbridge is as dull as ditchwater as it typically adds USB and SATA ports to the previous version.

That’s very useful but you could hardly call it exciting, so we’re thankful that SB750 has a couple of tricks up its sleeve. The first is the addition of RAID 5, which puts AMD RAID on an equal footing with Intel and presumably keeps the AMD Marketing people happy – even if we think you’d be mad to consider RAID 5 in a desktop PC. If you’re dead set on using integrated RAID you’ll find AMD’s RAIDXpert utility will help you set up your array.


The second change from SB700 to SB750 is the Advanced Clock Calibration Link for AMD OverDrive – ACC for short. The idea is that the new Southbridge connects to unused pins on the Phenom processor to allow you to change clock timings and thus increase the processor speed. This is where the other side of the 790GX comes into play as you can use it to build a gaming PC that ignores the integrated graphics and instead opts for performance all the way. 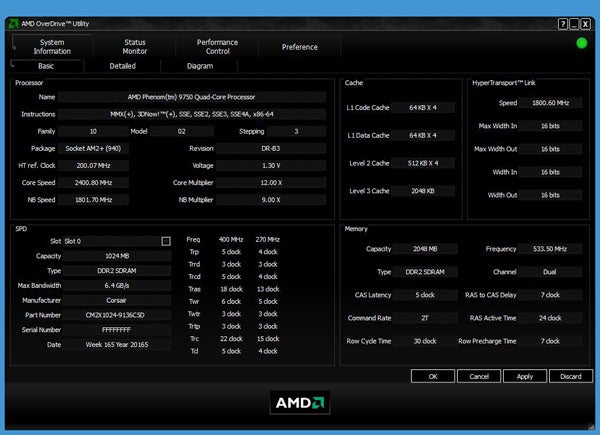 We installed AMD OverDrive v2.1.2 that we downloaded from the ATI website, since Foxconn didn’t provide it on its driver disk.


AMD claims that ACC will allow you to overclock your Phenom by 200-300MHz more than you could previously achieve. In the past we have had pathetic results overclocking Phenom, so we plugged in a Phenom X4 9750 and got to work. This is a 2.4GHz processor that is multiplier locked and runs at 12x200MHz, so our only option was to raise the 200MHz reference clock and ACC or no ACC we couldn’t budge the speed at all. 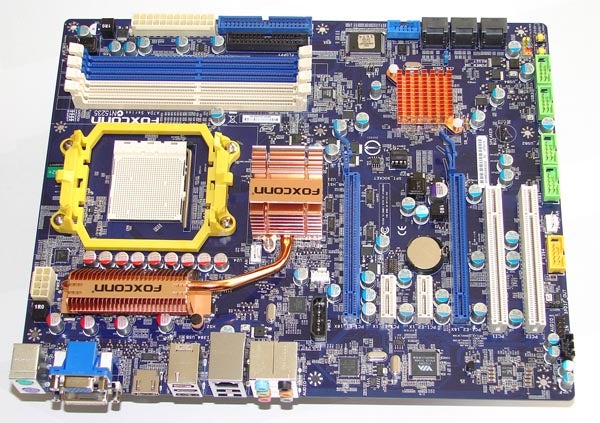 We then switched to a Phenom X4 9850 Black Edition, which costs the same £129 as the X4 9750 but runs at 2.5GHz and more importantly it is unlocked. We had no trouble raising the speed to 3.1GHz, which is an epic amount for a Phenom, but we were also able to do it with ACC disabled so we have no idea if the credit should be laid at the door of AMD for its chipset or for the latest version of OverDrive or perhaps it’s all thanks to Foxconn.

You’ll have spotted how the vast majority of this review has dwelt on the AMD chipset and that’s because there is surprisingly little to say about the Foxconn A7DA-S. The layout is very tidy with the main power, ATA133 and floppy connectors next to the memory slots and the six SATA connectors are laid down to avoid connection problems. Foxconn includes one eSATA port on a bracket so you can convert one of the ports from internal to external duties.

The front panel headers are colour coded and sit next to the Power and Reset micro buttons and there are four USB headers across the foot of the board. Turning to the I/O panel there are two legacy PS/2 ports for mouse and keyboard, the HDMI, DVI and VGA ports for the HD 3300 graphics, six mini-jacks for audio, Gigabit LAN, four USB 2.0 ports and one Firewire port. Having a mere four USB ports is disappointing and the lack of digital audio output is also a bit of a shame, but you can undo most of the damage if your case carries a few front-mounted USB ports. The dual graphics slots are widely spaced and will present you with no problems with any CrossFire configuration you may wish to use. 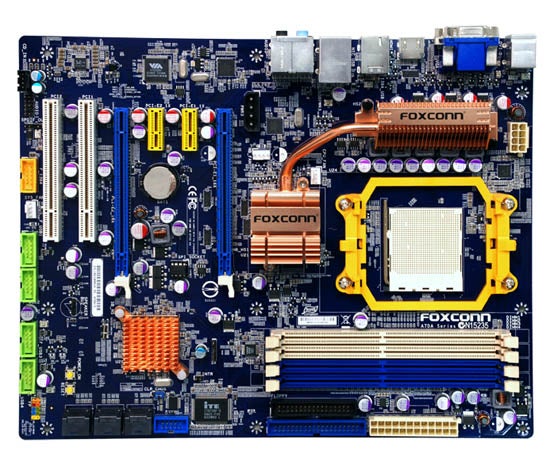 
Foxconn has used the new AMD 790GX chipset in a workmanlike motherboard that will successfully overclock a Black Edition Phenom processor. So, though the price is a little steep and some of the new features are awaiting driver support, if you’re after more overclocking headroom on such a processor then it’s a good place to start. 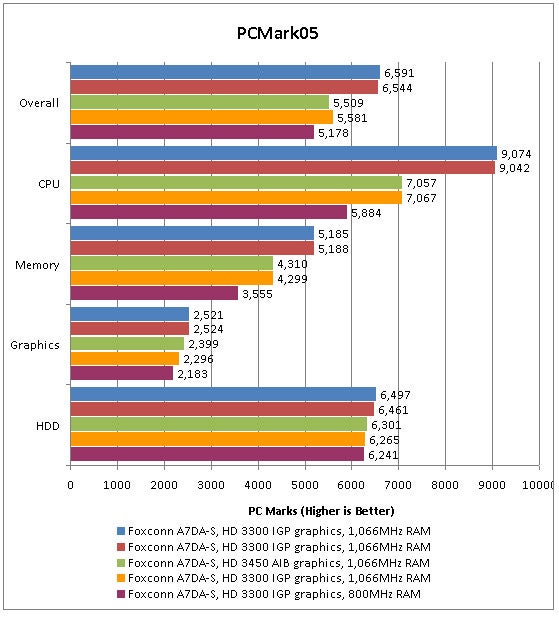 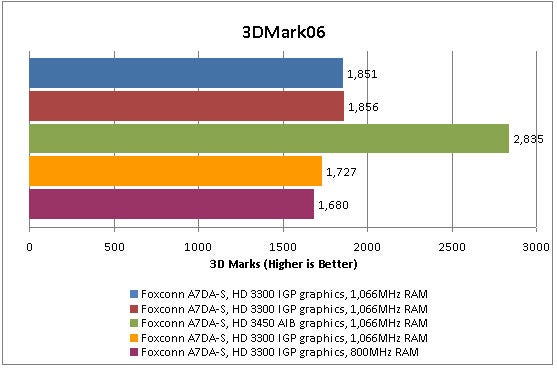 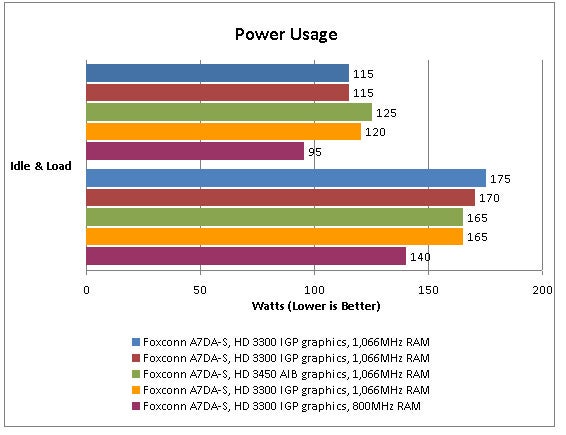