Oculus Rift, Project Morpheus, HTC Vive, Samsung Gear VR, Google Cardboard… What does that tell you about virtual reality headsets? Well, that there’s already a lot of them. Every tech company seems to be making one. But that’s not deterred Fove, a company founded by a former Sony Computer Entertainment Japan game producer and a facial-recognition technology expert. The small outfit truly believes it’s come up with something much better than what Sony, HTC and company currently has to offer.

The Kickstarter-funded Fove headset’s special feature is a set of eye-tracking sensors to help create a more immersive virtual reality experience. That could mean aiming a gun with your eyes or even making eye contact with virtual characters in a game for a greater emotional connection.

SEE ALSO: Why SteamVR and the HTC Vive will win the virtual reality war 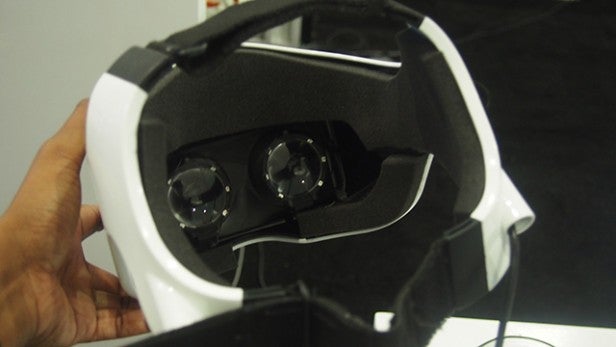 Another benefit is that it helps reduce the number of awkward head movements you need to perform to select things, which can often contribute to the motion sickness issue with VR headsets. Fove hopes there will be other uses for its headset outside of gaming as well and has already spoken to people within the medical industry about them utilising the technology.

So how does it work? At first glance, it doesn’t look all that different from the current crop of headsets. The predominantly plastic piece of kit sits on your head, with elasticated fabric to tighten at the back and get the right fit. It weighs 400g, so it’s heavier than the Gear VR before the Note 4’s slotted in. Having only worn it for around 15 minutes, it’s tough to know how we’d cope with extended periods of use. 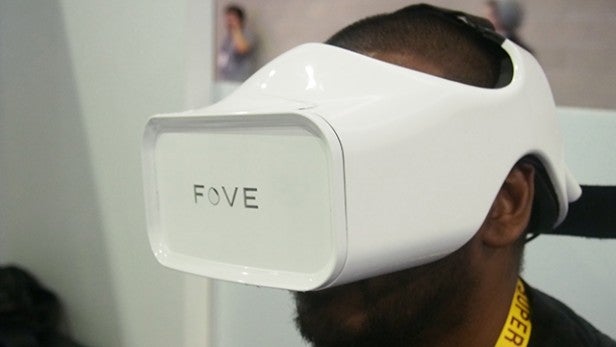 It currently only works with PCs and is powered via USB, so there’s no external power source. You can also connect it via DisplayPort, but currently there’s no Bluetooth or Wi-Fi support. Fove said it could add wireless connectivity in the future.

Up front is a large 5.7-inch screen with a 2560×1440 WQHD-resolution screen, giving it a higher resolution than the HTC Vive, Morpheus and Oculus. It also offers an impressive 100-degree field of view, matching the best in the business.

When you glance inside you’ll see two lenses, but it’s not until you get the headset on and plugged into a PC that you’ll notice it also packs in a series of IR sensors and tiny cameras for each eye to capture the eye movement. To get the optimum experience, you’ll need to go through a short calibration process, which requires staring at a small green dot from different directions. 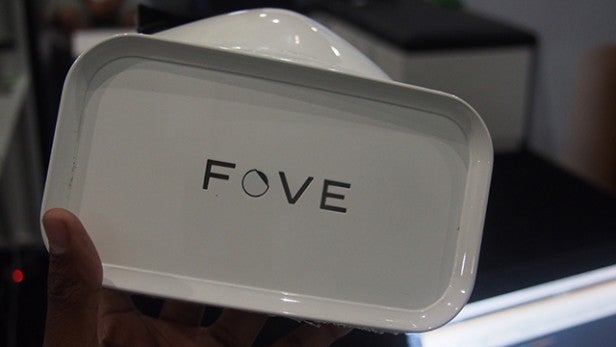 When it comes to content, there doesn’t seem to be a lot of it at the moment. I tried a very simple shooting game where you use your eyes to aim and fire at spaceships. Despite an issue with the headset sitting too high above my eyes and affecting the calibration, I could aim with ease and it didn’t feel at all nauseating to use.

The current software developer ktt (SDK) has the capability of integrating content from Unity, Unreal Engine and Cryengine, which means there’s the capability to convert existing virtual reality games. Fove has also recently announced it’s adding support for OpenVR SDK and the Steam VR platform. Now it’s down to the developers to decide if they want to take advantage of Fove’s unique technology. 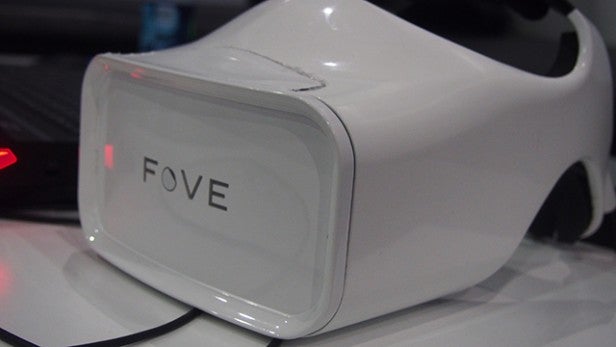 The Fove VR headset shows great promise, but I’d need to see more captivating content to be convinced that it has a future. It has all the core elements in place to create a great virtual reality experience, including the resolution and that headline eye tracking. Fove says it’s going to get the latter to an accuracy of 1/5th of a degree, and if it does, that opens the door for uses such as simulating depth of field and contextual feedback.

Our other main issue is the comfort and fit of the headset. Fove has assured me it’s a problem they’re well aware of and addressing by adding a better mechanism at the back to secure it in place and generally just make it nicer to wear.

But there could be more. If the company hits its $700k stretch goal on Kickstarter, it’ll explore adding support for Valve’s
laser-based Lighthouse technology to its development kits, potentially bringing body
tracking to the Fove, just like the HTC Vive has.

The Fove headsets, which will cost $350 if you pre-order now or $500 at retail, are not shipping until 2016. That means Fove has time to address the issues. If it can sort them out, it could offer up a truly special alternative to the big names.