What is the Fossil Q Explorist?

The Fossil Group, owner of watch brands such as Michael Kors, Diesel, Kate Spade and Skagen, is still very much putting its eggs in the smartwatch basket. The Fossil Q Explorist is just one of many watches that falls under its third-gen range. The Michael Kors Access is another such watch we’ve recently reviewed.

Like the Access, The Fossil Q Explorist sits at the fashion-focused end of the smartwatch scale, prioritising a traditional watch design over some of the standard smartwatch tech.

In this case, it means some of the more advanced features are absent – notably GPS and a heart rate monitor for sports, and NFC for contactless payments. While the former isn’t a big miss, the latter is a somewhat significant omission in terms of smartwatch convenience.

The Fossil Q Explorist is the third-generation successor to the likes of the Fossil Q Founder and Fossil Q Marshal, and its design traits are similar to those models.

Like the Q Marshal, this is a big watch that sports a far more masculine design. Its face is a wrist-eclipsing 46mm in diameter and is 12.5mm thick. With that said, thankfully, it doesn’t feel particularly heavy on your wrists.

The model I have here for review has a silver bezel accented against a blue watch case. The user-replaceable 22mm leather strap strap comes in an attractive brown with white stitching – and, out of the box, I found it far more supple than the Q Marshal’s strap. 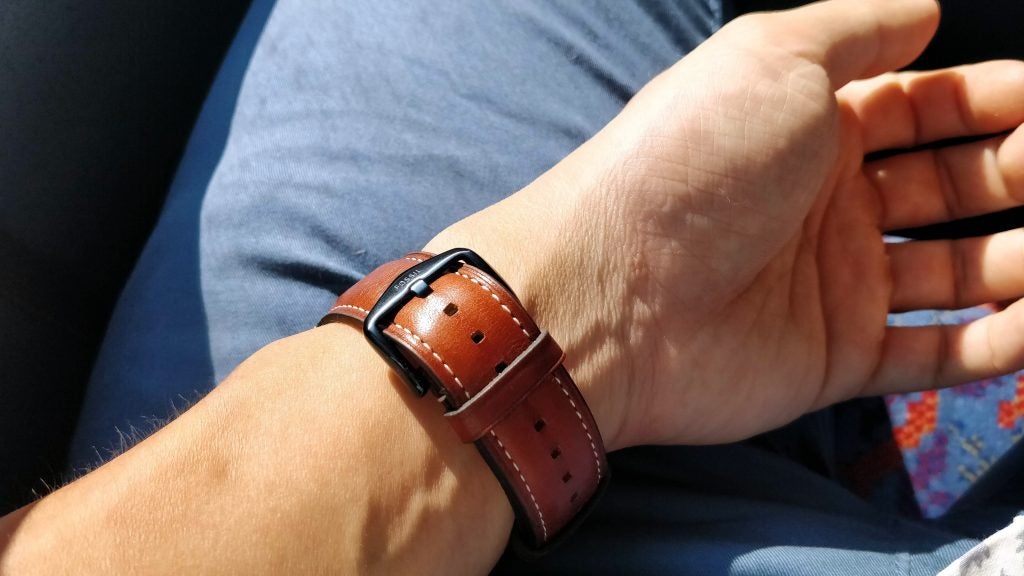 As a fashion-focused smartwatch, I much prefer the design of the Q Explorist to the previous generation models. It looks and feels like a premium watch, ignoring its underlying ‘smart’ capabilities.

If a leather strap isn’t your thing, there are also slightly more expensive metal-strapped models available in a range of colours. Between the leather and metal strap options, this watch comes in six different finishes.

There are three buttons on the right side of the watch face, with the middle button also acting as a rotating crown, similar in execution to the Apple Watch. The crown button is a little spongy in feel, making it difficult to know if you’ve pressed it correctly. The two flanking buttons can be customised as shortcuts to any Wear OS app you have installed. 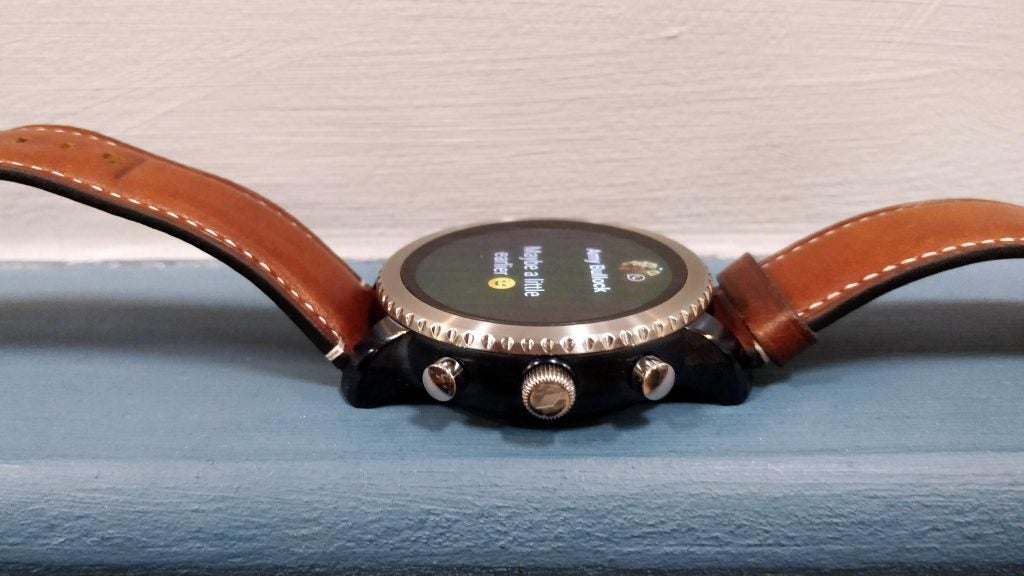 The Q Explorist is IP67-rated for water-resistance, so it can survive being submerged to 1 metre for 30 minutes without any issues. You’ll probably want to keep the leather-strapped models out of the water, though, since that’s a sure-fire way to ruin the leather.

Flip the watch over and you’ll notice the lack of that heart rate monitor. Considering this isn’t a particularly sporty watch, it didn’t feel like a huge omission. Having said that, if you’re looking to pick up a smartwatch that doubles as a fitness tracker then you might well miss the extra insight into your resting heart rate throughout the day.

While the design isn’t a massive departure from previous Fossil smartwatches, we welcome the changes to the display. The 1.4-inch 454 x 454 resolution AMOLED display now takes up the entirety of the watch face. Goodbye ‘flat tyre’. That little cut-out on the Gen 2 watches felt archaic, especially considering so many smartwatches had now managed to go ‘full display’. 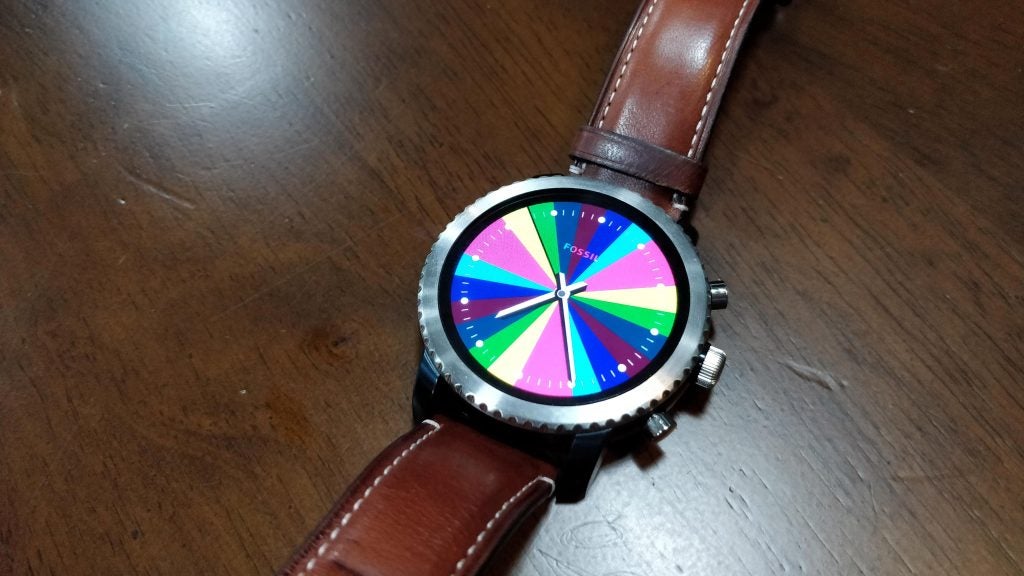 It means that watch faces now look far more attractive. Everything appears nice and sharp on the display, and the colours are equally vibrant. There’s also an always-on display mode, which shows a low-powered watch face when in standby. This still has a negative impact on battery life, however.

The Q Explorist can’t reach the ridiculously bright 1000 nits of the Apple Watch Series 3 or Fitbit Ionic, so it can occasionally be a bit of a struggle to see the display under particularly sunny outdoor conditions. It isn’t as bad as some smartwatches, at least.

There’s also now automatic brightness, which was oddly missing on the Fossil Q Marshal. I found it did a good enough job adapting to changing light conditions. 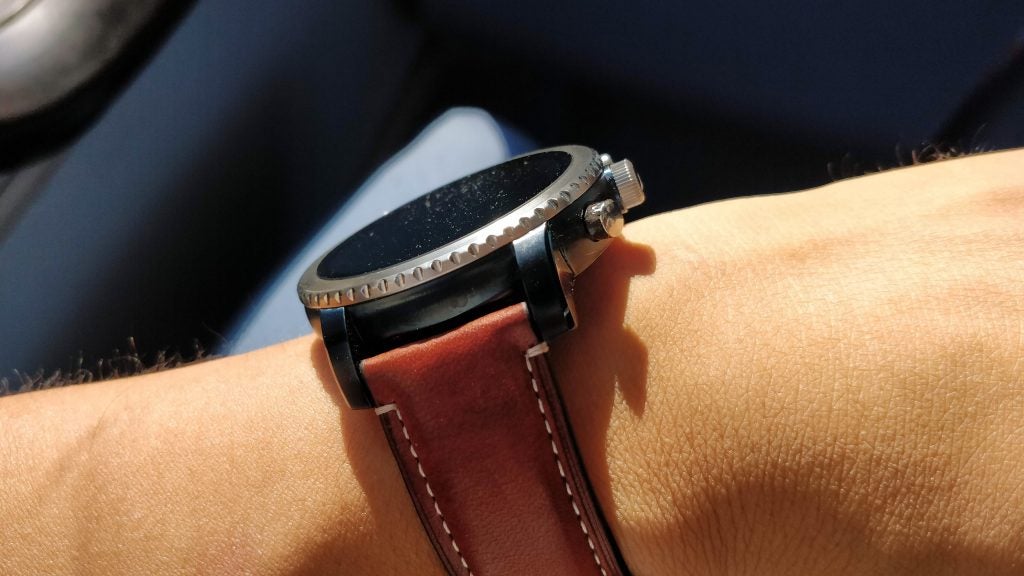 The same bugbear of the display taking a little too long to wake when rotating your wrist remains, and this is something we also experienced with the Michael Kors Access. When you simply want to check the time, that delay not only slows you down, but on occasion you’re left unsure as to whether the watch has actually detected you rotating your wrist at all.

As for interacting, the rotating crown is a welcome alternative to using the touchscreen, since it means you don’t have to obstruct the display when swiping through menus or your incoming notifications.

The Q Explorist runs the latest Wear OS and there isn’t really much to set it apart from other Wear OS smartwatches. Fossil has included simple ‘Maze’ and ‘Bolt Bot’ games, but these aren’t particularly fun. Also available at you fingertips is the Fossil Q app, which is the top shortcut button by default (which I swiftly swapped out).

The overall Android Wear experience is pretty standard, right down to the Qualcomm Snapdragon Wear 2100 processor, 512MB of RAM and 4GB of storage specifications powering it all. In general, performance feels snappy and responsive.

Google Assistant is present, available by pressing and holding the crown button. The microphones proved adept enough to take commands and everything works as well as you’d expect. 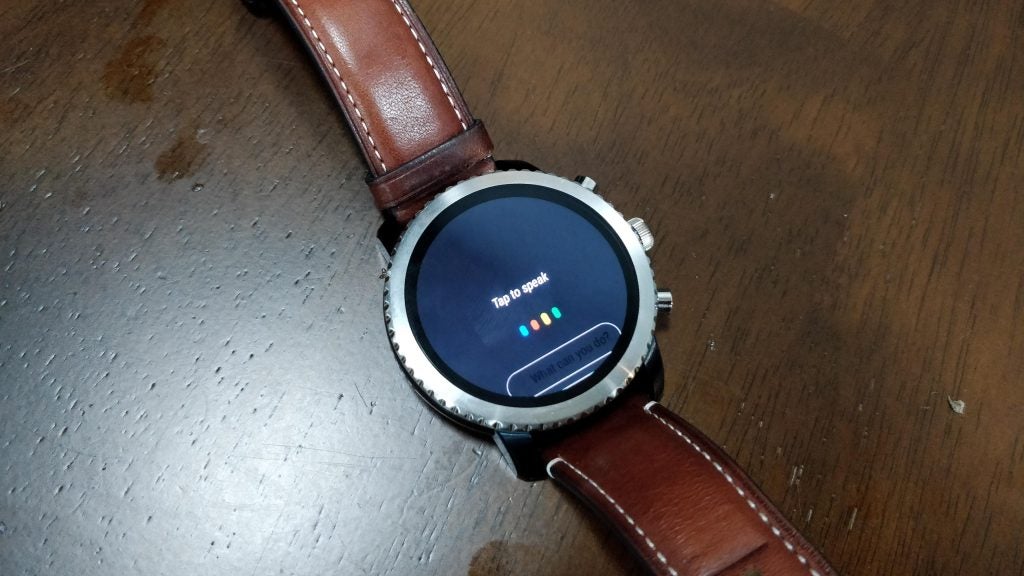 It’s all very par for the course. For anyone looking for fitness functionality, there isn’t a great deal available beyond basic step-counting and simple activities from Google Fit. Without GPS or a heart rate monitor, a lot of the more advanced functionality is missing. But then this isn’t likely to be a smartwatch that the more sports-inclined would opt for

The big omission is NFC, which means there’s no Google Pay support for contactless payments. That’s a real shame and one of the more convenient aspects of owning a smartwatch. 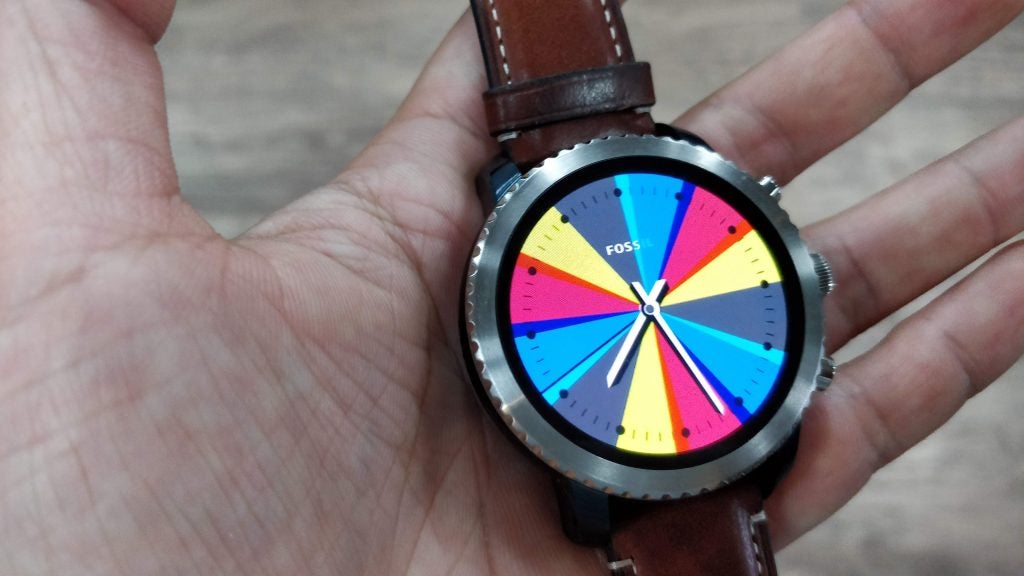 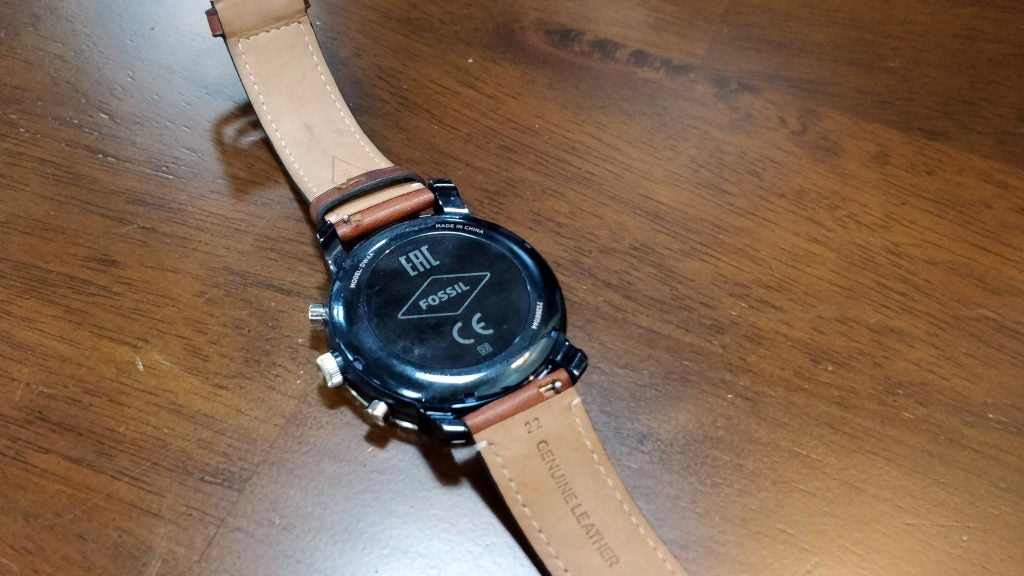 Battery life when using an iPhone or Android phone is also another area where the experience differs. With the iPhone, I was barely making it towards a day of battery life. With an Android phone, I could almost get to two days from a single charge with always-on display turned off. With it on, it would die about halfway through the second day.

Charging is via a magnetic charger that attaches to the rear, much like the Apple Watch. However, the magnet is much weaker. As such, it’s easy to misalign, often resulting in a watch that doesn’t charge.

Why buy the Fossil Q Explorist?

If you’re won over by the design and only have basic needs when it comes to smartwatch functionality, there’s a lot to like about the Fossil Q Explorist. Considering people used to, and still do, buy watches based purely on design for a premium price, the Q Explorist checks the right boxes.

It’s well made, looks good and delivers most of the fundamental smartwatch experience. It’s just a shame there’s no Google Pay support. If you’re looking for something for sports, however, then this isn’t the watch for you.

At £259, it’s pricey – but at time of writing, we’ve seen it for less. As such, if you can pick it up slightly cheaper then it gets a stronger recommendation.

An attractive fashion-focused smartwatch that almost delivers all of the smartwatch basics.