Many of the most heinous crimes in the history of games development have been perpetrated in the name of tie-ups with films. Over the decades, games-of-films have become synonymous with hopelessly rushed development periods and a general lack of any reason to exist other than as box-ticking exercises for film company marketing departments with too much cash to burn. So it’s refreshing, at least, to see Microsoft and Universal trying something different with the clunkily titled Forza Horizon 2 Presents Fast & Furious.

At least it avoids the most obvious movie tie-up trap, since it is based on the thoroughly excellent Forza Horizon 2, rather than being cobbled together from scratch with the backdrop of an impossibly tight deadline. At launch, at least (until April 10), it is a free download, and there’s nothing gamers love more than free things. Since, essentially, it’s an item of downloadable content for Forza Horizon 2 but, unusually, is designed to operate even if you don’t own the original game. And it will never cost more than a few quid. And it’s perfectly good fun to play. What, then, could possibly go against it? 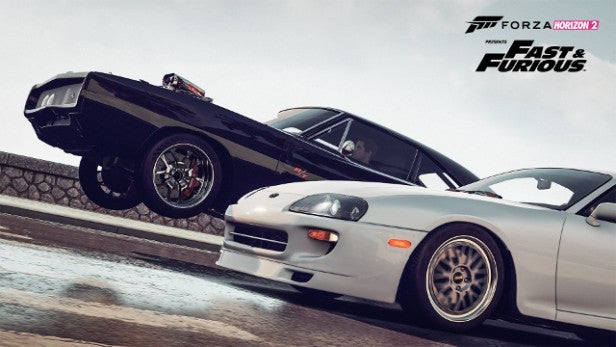 Well, it’s another movie-game crossover whose raison d’etre is distinctly questionable. As you will find out when you finish playing through it, it’s a sort of Trojan Horse designed to suck you in with its Fast & Furious branding, show you the charms of Forza Horizon 2 and then sell you that game, like some sort of very elaborate advert.

Unforgivably, when you finish Fast & Furious, you’re invited to click through to Microsoft’s store and buy a digital download of Forza Horizon 2, the cheapest version of which is on offer for £44.99. Whereas the most cursory trawl around the web will show you that a physical copy of Forza Horizon 2 can easily be obtained for less than £25.

FH2 Presents Fast & Furious doesn’t even have a vast amount to offer those who have just watched Fast & Furious 7 at the cinema. It kicks off with a montage from that film, showing a bunch of things that we’d love to be able to do in a driving game, such as being at the controls of cars parachuted to Earth, or jumping from one Dubai skyscraper to another. But none of that sort of action is on offer. It merely plonks you in Nice – where the original game kicked off – and tells you via voiceover that you need to acquire ten cars by winning races in the vicinity. 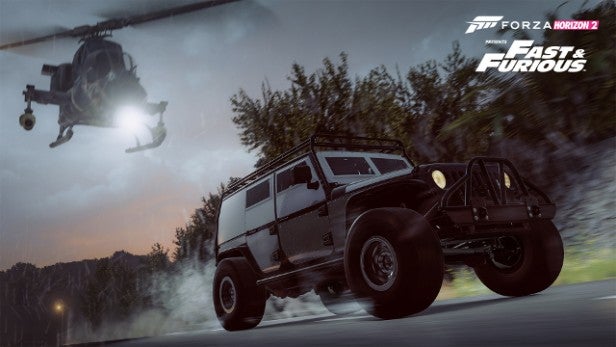 Those cars, naturally, are the ones featured in the film, and they do include some highly desirable sheet metal (none of which is front-wheel drive, happily). There’s a bias towards souped-up classic American muscle cars, including a customised Dodge Charger R/T and Plymouth Road Runner, plus the likes of a Bugatti Veyron and McLaren P1, as well as the armoured Jeep Wrangler from the film.

In order to get those cars, you generally have to finish in the top three in races (both on the streets and cross-country). At least Fast & Furious shows the diversity of Forza Horizon 2, by mixing things up with time-trials and challenges that, for example, encourage you to string together style-moves like burnouts and drifts. There’s one challenge which involves smashing a certain amount of advertising boards within a time-limit, which brings back memories of Codemasters’ Dirt games. 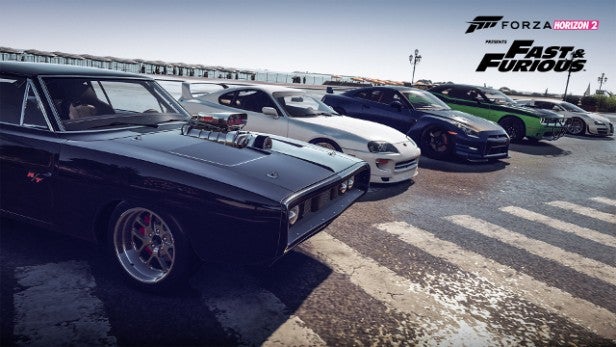 There are also five “Bucket List” cars to acquire, a “Barn Find” which involves a modicum of detective work followed by another timed challenge, and 20 hoardings dotted around Nice for you to smash. But that’s it: it’s entirely possible to complete everything within Fast & Furious in less time than it takes to watch the film. You can replay all the missions and challenges to your heart’s content, but getting stuck into the full game would represent a much more rewarding use of your time.

There’s only one thing that Fast & Furious offers those who already possess Forza Horizon 2: some new Achievements, which can all be harvested very quickly. As for its target audience – those who have seen Fast & Furious 7 – it does constitute a very effective advert for Forza Horizon 2 which, if anything, has tightened up its cars’ handling since launch (even if you’re at the helm of a beast of a Yank-tank with 800bhp being directed through the rear wheels) and looks as magnificent as ever. 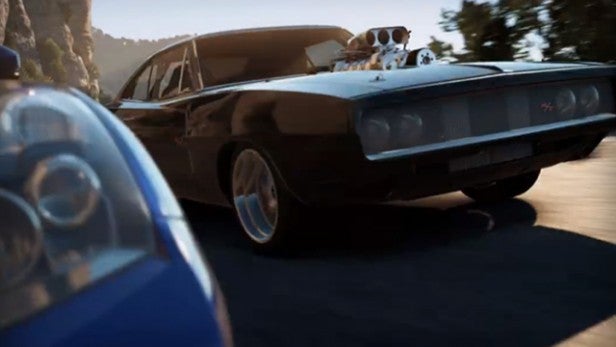 But if they are expecting an experience that feels like being dropped into the middle of the film itself, they will end up feeling short-changed, and the way in which Fast & Furious tries to sell gamers an overpriced digital copy of Forza Horizon 2 after its completion is nothing short of criminal.

Verdict
It seems churlish to visit a barrage of negativity on a free game, but one sincerely hopes that Forza Horizon 2 Presents Fast & Furious isn’t the harbinger of a new trend in the games industry.

Fun though it may be to play – while it lasts – it eventually reveals its true colours as an utterly cynical marketing exercise, designed to generate a sales spike for an ageing game by cashing in on the popularity of one of the most enduring of movie franchises.

What really rankles is the lack of any visible effort, beyond recreating the cars from the film, to make it truly Fast & Furious 7-specific. Hopefully, if any similar game-movie crossovers crop up in the future, whatever their ulterior motives, they will at least make more effort to emulate the movie franchise on which they are piggy-backing.