If recent history is anything to go by, movies, TV shows and games don’t have an all too accurate record when it comes to predicting the future. The notion that we should all be flying around in cars and jumping on hoverboards by now as predicted by Back to the Future 2 is a well worn one, yet Marty McFly and co. are by no means the only ones to make a muddle when it comes to predicting years to come.

Hopefully Fortress: Destroyer will prove to be equally inaccurate, given that if it’s not, we’ll all be living underwater at the mercy of bands of pirates in about 50 years time. That’s well in advance of Busted’s eerily similar forecast for the year 3000, too, though minus any mention of a great, great, great Granddaughter looking “pretty fine”. Nevertheless, Fortress: Destroyer is an equally harrowing prospect.

It’s your job in this somewhat dystopian vision of the future to try and take the seas back, taking charge of an ever expanding band of battle ships to take down the Blackwater – a fleet of malevolent ships intent on suppressing what remains of the Earth’s population and nabbing the planet’s resources for their own gain. Doing so is a question of setting out on short and sharp missions within contained battlefields, freeing cities around the globe from the Blackwater’s grip. 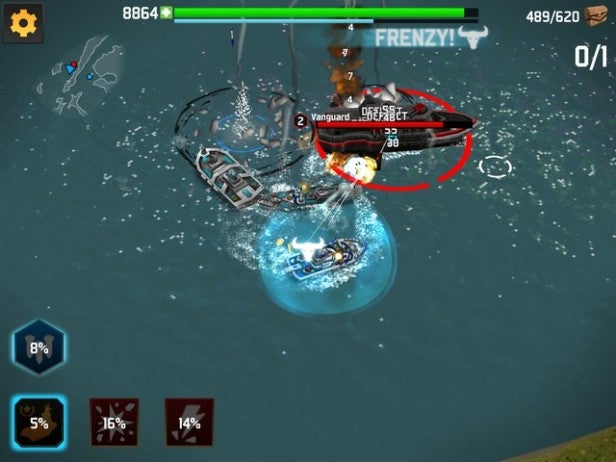 Controls are about as simple as they get. Viewed from the top down, moving your ship is a case of tapping on the screen where you’d like it to go, with the idea being to keep placing new targets as your craft nears any existing ones in order to keep it moving. Attacking rivals is handled in the exact same way – tapping on any enemy ship or BLANK will see you fire at it, with repeated taps the best way to take it out. As a result, battles in Fortress: Destroyer become tap-happy contests where your finger bobs up and down on the screen in quick time. You also have a band on power-ups at your disposal (depending on which ship you set sail with) enabling you to do everything from call on short bursts of air support to surround yourself with additional ships to help you survive when you’re fenced in.

Some stages come with a ticking clock and specific challenges (such as taking over bases, handled in a capture the flag style manner, or retrieving enemy data from, all while holding off wave after wave of attacks), while in other levels simply clearing the seas of all enemy ships is the goal. The more you play, the more upgrades you unlock and the better equipped your fleet becomes, enabling you to head into deeper waters (metaphorically speaking) and take on ever trickier tasks. All of the above missions are tied to a global map that gradually unfolds to show new cities the more you play, with the most pressing encounters earmarked for your consideration. 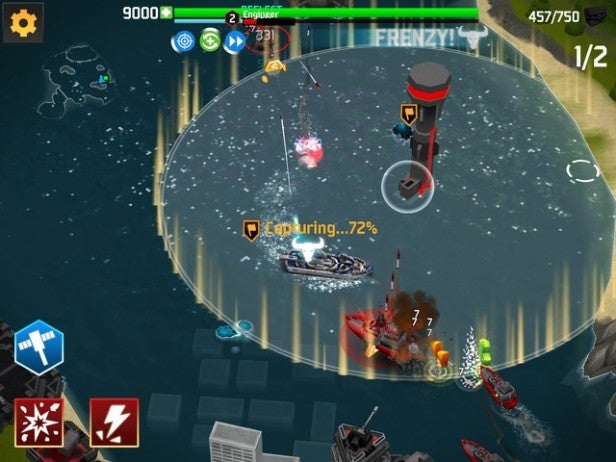 Very quickly Fortress: Destroyer falls into a set cycle, with missions enabling you to upgrade your ships in order to take on yet more missions. While the battles themselves are fun enough, if a little simplistic, the sense that you’re simply grinding through a series of largely identical stages with no real end goal in sight is undeniable. Fortress: Destroyer’s menu systems also leave a lot to be desired (upgrading your ships, for instance, is full of unnecessary button presses and finger drags that needlessly complicate the whole process) and though the game attempts to hand you free rein over which stages you take on and when, the whole thing feels like it’d be better suited to a more linear approach, adding some semblance of progression to levels that quickly start to feel like disconnected encounters.

Either way, though Fortress: Destroyer leans more towards the superficial side of the strategy genre, there’s no denying that its intentionally no-nonsense approach to naval combat delivers fun in spades. If you’re not looking for anything overly deep but fancy firing off missiles aplenty and barging into any boats daft enough to stand in your path, then it’s hard not to recommend Fortress: Destroyer as your perfect port of call, though developer Ninja Kiwi would be advised to streamline the universe it sits in if it wants its water world to be anything other than a quick fix.

Verdict
Exciting in short bursts, Fortress: Destroyer’s tap happy take on real-time strategy packs in a lot of concise action but suffers a little when it comes to the narrative that strings it together. Those looking for some maritime based marvellous that doesn’t take itself too seriously, however, will find little to complain about.