If Sega published a new Sonic the Hedgehog platformer each and every year, but upon start up it became clear that it was the exactly same game as the previous release save the ability to play as a few new characters, gamers would be outraged. Yet, when it comes to some genres, we appear entirely happy to part with cash on an annual basis for what is, to all intents and purposes, is the same game.

Sports sims are particularly guilty of such crimes, and it puts those charged with reviewing games like Football Manager Mobile 2016 in a somewhat tricky position: SEGA and Sports Interactive alike have, once again, served up a more than proficient football management sim, but when you boil it down to its core ingredients, it’s especially hard to spot just what’s new or different in this release that was missing from previous outings.

Before delving into what’s wrong with Football Manager Mobile 2016, however, it would be remiss not to go over what the game gets right. As well as the standard career mode – where you’re handed the role of manager at a random, lower league club and charged with making your name within 30 years – you can also rescue a team in, as Football Manager Mobile 2016 describes it, a “precarious situation”, or replace any team with a fictitious club, powering them up the leagues in the process. 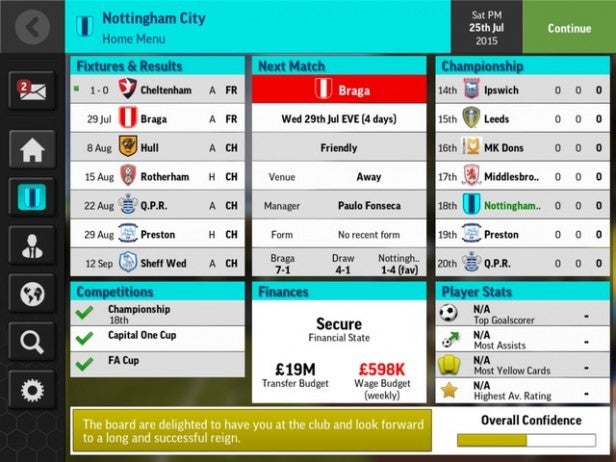 It is, on a purely functional basis, all you could ask for. All of the big European leagues are on offer here, and the menu system – though not exactly pretty or even well designed – serves up options aplenty, letting you bid for rival players, set up your team in the formation and style of your choice, and keep a track on the ins and outs of the game. Though even doing some of the simplest tasks is arguably a little too fiddly – substitutions in match never feeling entirely intuitive, with tapping on a players name bringing up their profile rather than switching their position, for instance – but for newcomers to football management, Football Manager Mobile 2016 has all the options you need without making the process overly deep or confusing.

The simulation of matches, however, feels rather disjointed. A large portion of the game is conveyed through text based commentary, with shots on goal – successful or not – played out through Sensible Soccer style top down simulations. The problem is, there seems to be little link up between the text commentary and the on pitch action, with the game simply cutting into the latter when the former appears to be in full flow. What’s more, given goals only ever fly in during the visual simulations, there’s little point in paying attention to the text commentary, even when it’s attempting to illustrate an exciting passage of play. 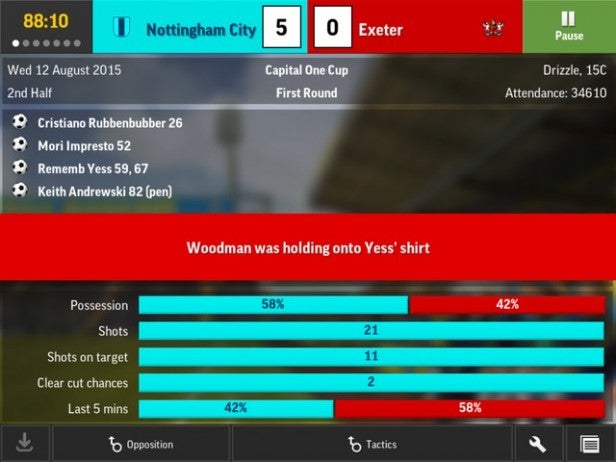 The bigger bugbear, however, is that rather than feel like a game made especially for mobile, Football Manager Mobile 2016 plays out like the very same compromise its predecessors have been. It’s a scaled down version of the standard PC release, presumably because Sports Interactive (arguably rightly) don’t consider mobile a suitable home for a full-on football management sim. However, the game makes no attempt to make use of mobile-only features like the accelerometer, instead transferring the kind of setup enjoyed on desktop to your mobile or tablet.

Add to that the fact that essentially nothing has changed within play when it comes to the last few games in the series, and you have to ask what exactly Sports Interactive works on year after year other than making sure real world transfers are replicated in play. Which, when put together, leaves Football Manager Mobile 2016 in the difficult position at being entirely proficient at what it does, but being equally guilty of not doing enough. As such, if you’re desperate to live out your managerial dreams on your mobile, it’s hard not to recommend Football Manager Mobile 2016, but if you’re looking for a release that makes the most of mobile or pushes the genre on in any shape or form, you may have to wait a few more seasons.

Verdict
Though utterly acceptable as an intentionally scaled down version of football management, Football Manager Mobile 2016 makes no real ground on previous editions and, to all intents and purposes, is exactly the same game SEGA has been pushing out for the last few years.