I spent 545 hours playing Football Manager 2014. That’s over 20 days. For anything other than a full-time job, that’s a ridiculously long amount of time. Compare that to the 34 hours I put into FM 2015, and it’s obvious I wasn’t the biggest fan of the spate of changes Sports Interactive made last year.

The complete overhaul of the UI was confusing to get to grips with. Options were moved, there was a greater emphasis on the universal search bar and it seemed like everything was altered simply for the sake of it, rather than to make it easier to move around the game.

Football Manager 2016 doesn’t try to rewrite the rule book. In fact, there are only a few headline changes from last year. You still create your profile – there is now a hilariously awful build-a-manager option that makes you look like a character from a bad PS1 game – choose which team to manage, sculpt your squad and hopefully lead them to greatness. Yet, the bevy of smaller additions make it much more inviting game, meaning Football Manager has hooked me back in after a year off.

Take the updated Team Instructions panel for instance: a vital area any budding football manager will know all too well. Instead of being just tick-boxes, sliders and text, it’s all based around visual diagrams. For the first-timer it’s still a lot to take in, but being able to quickly change your build-up play from ‘exploiting the middle’ to ‘pump ball into the box’ by moving an arrow and knowing straight away if it will make a difference is handy.

That theme of ‘making things more obvious’ carries on throughout most of the changes. The game will now directly tell you straight away whether or not a player will fit the role you give him. Put him somewhere he won’t be effective and an indicator will turn from green to red. But instead of just leaving you wondering what to do next, it’ll suggest players who better fit the role. You could see this on previous games, but FM 2016 puts it right to the front, rather than hiding it behind infinite menus.

Another handy addition is that suitable substitutions are highlighted in green, so you won’t accidentally replace your zippy wing-back for a Pirlo-esque defensive midfielder. 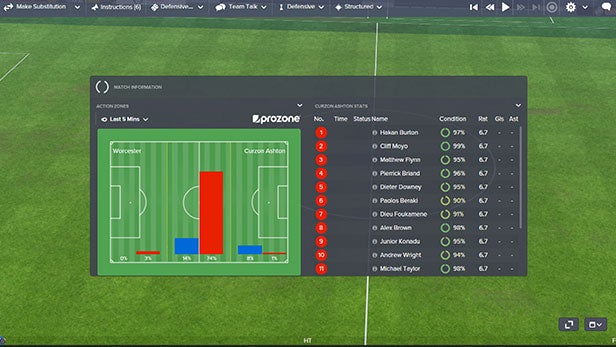 The game is full of those useful visual cues, but they’re not overbearing enough to make veterans of the series feel they’re being mothered into easy decisions. This is still the deepest and most authentic football manager sim you can get.

Thanks to a partnership with Prozone, Football Manager 2016 feels even more packed to the rafters with juicy nuggets of information and stats than before. Everything from scout reports, to the news stories that fill-up your email inbox and even questions asked by journalists pre-game feel richer and more realistic. For instance, when I dropped John Stones from my Everton starting line-up I was asked whether or not this down to his large amount of mistakes – I was even told it was 6 vital interceptions he missed – in the previous match.

FM 2016 also does a better job at introducing completely new players to the game. Aside from the main game mode, there are a couple of other options for those who aren’t willing to take a 5-month break from work and a social life. Create-a-club is fun for those who really to build something unique, while Football Manager Touch is an updated version of the last year’s Classic mode that slims downs the amount of background operations and lets you simply put players in a team and get straight into a match. Incidentally, this version will be sold separately later in the year and you’ll be able to transfer your progress from PC to the – again, soon to be released – tablet version. Personally, the idea of moving my game from laptop on the sofa to iPad on a commute has been a feature request for years. 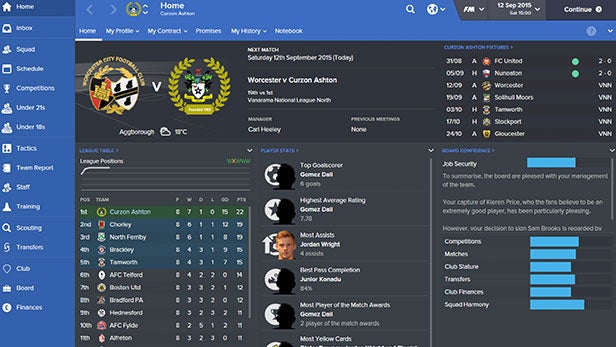 ‘Touch’ really speeds things up and going back into the regular mode after taking it for spin show just how slow the game can be. Loading screens still take a age. You have to constantly hit ‘Continue’ while your team is off enjoying an international break, meaning you’re just skipping the days and wasting real-world hours.

Many disagree, but I’ve never been a fan of the 3D game engine. Give me those 2D dots any day. But, for those that leave it on the 3D mode is still, probably intentionally, visually basic. There’s now more variety of stadiums and detail is ramped up with rust covering the metalwork of the older grounds, but it’s not trying to be FIFA 16. Even on a fairly powerful MacBook Pro that the games gives a 5-star graphical rating too, the 3D in-game view stutters and slows things down even more.

As with majority of annual releases, FIFA and Pro Evolution Soccer certainly included, FM 2016 doesn’t feel like a huge jump from the title it’s replacing. The array with visual changes certainly make it more inviting to the newbie, but if you’re already comfortable with FM 2015 switching over to the latest version won’t feel like a giant step-forward. 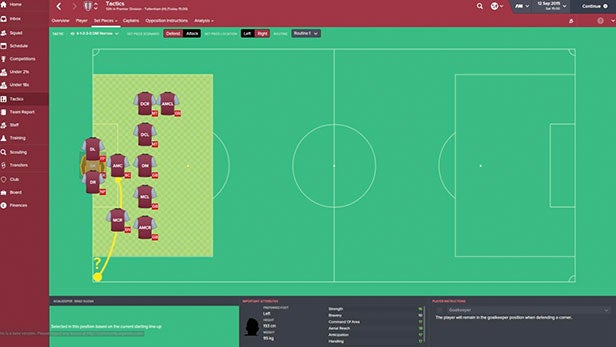 I’d have liked to see the game sped up a bit, with less time spent on loading screens as the days tick away. Having the fully-fledged Touch version available to go for multiple platforms too would have been great, as the cross-saving and cloud syncing features certainly make that an interesting prospect for the players who are less-fussed about the complete Football Manager experience.

Yet, the Football Manager series is still the best of the best. No other football management sim comes close, and to be honest most rivals don’t even try, to matching Sport Interactive’s behemoth for sheer game depth and true-to-life stats.

Verdict
Football Manager 2016 is far from the most revolutionary entry in the series, but it’s still an addictive game that’ll have you signing away the next few months of your life.