Sports Interactive’s football management games are a British institution. Given that football is the national sport and SI has been making football management games for over a decade, there can be little argument about that. They are, as we’ve known for a long time now, the games that footballers play, the games whose worldwide database of players is so comprehensive that clubs and managers use them for scouting. Even when it lost its beloved Championship Manager brand to Eidos it has continued to succeed, finding a new home with Sega and a new name: Football Manager. 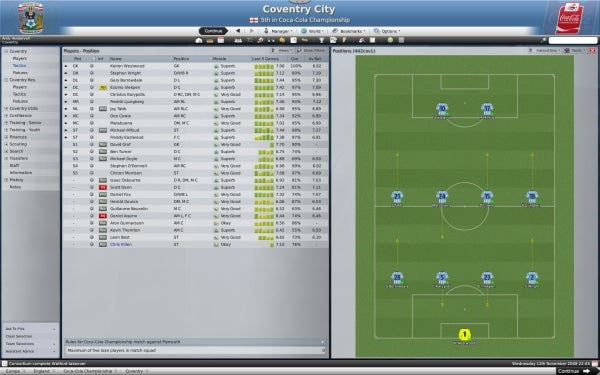 Of course, like any football title, a new version arrives every year and as such the series has settled into a comfortable and consistent evolution; every year bringing with it a slurry of new features, some large, some very small indeed. It’s still the case with 2009 but one of the new features is a particularly important one. So important, in fact, that it’s writ large on the front of the DVD case: “includes new 3D match view”.


Anyone who has played Football Manager games will know this is a pretty significant development. It took long enough for SI to develop a viewable match engine at all and it has stuck with its perfectly capable 2D effort for a while now. It is still in the game, so those with lower power machines needn’t worry, but the new 3D match engine also brings with it a new “TV View” from which to view games.


It’s a massive improvement, too. In fact, the elegance of the TV View brings to harsher light the inadequacies of the old system. When we weren’t enjoying the simplicity of the new presentation, we were constantly frustrated when the game forgot to switch between our default split view and the 2D pitch when displaying action, leading to us regularly missing important incidents. 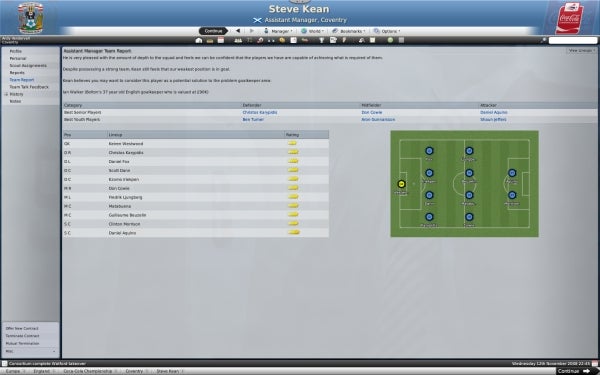 In the TV View, however, this is never a problem since the whole screen is utilised properly – something aided by long overdue support for widescreen monitors. Along the top of the screen is the score, with a shortcut to the tactics screen, then there’s a drop down menu where you can select to display various widgets, such as player ratings, match stats and all the other various bits of information. These can then be dragged around the screen, closed and re-opened whenever you like, giving you quick access to the stats and facts you need without ever leaving the action.


As for the action itself, the graphical presentation is fairly basic, so any notebook with discrete graphics should have no problem and even integrated graphics should be able to cope, but the extra immersion it provides is invaluable. Compared to the 2D view you get a more thorough perspective on how the match is developing, how your players are interacting and also how your players compare physically against the opposition. So, if you find your central midfielder is being out jumped by his opposite number you can quickly shuffle your team to reflect this. A multitude of different angles mean you can follow the action from different perspectives, too, and provided your PC can handle it this is the best way to experience match day.

Further tweaks have also been made to the match day experience, with your assistant manager providing far more feedback and information both pre-match and during proceedings. This is a good thing, but at times his advice can prove infuriatingly cryptic since you’re only ever told about problems, not how to fix them. This, in a sense, is understandable, since it would remove a level of challenge, but for the sake of realism it seems odd to deliberately limit the feedback he provides. For instance, it would be good if your assistant could provide more feedback on your tactics, making suggestions about things you might be able to improve upon or things you’ve overlooked – something that can happen given the sheer number of options available to you.


All this said, not all of his advice is without benefit. During games he’ll tell you if a player isn’t getting on with your tactics, sometimes telling you a player is used to playing a more direct style, or prefers to close down players more or less often. These kinds of touches are very useful and he also offers excellent advice about which players you should sign, identifying weaknesses in the team and sugggesting players you could sign to rectify them. 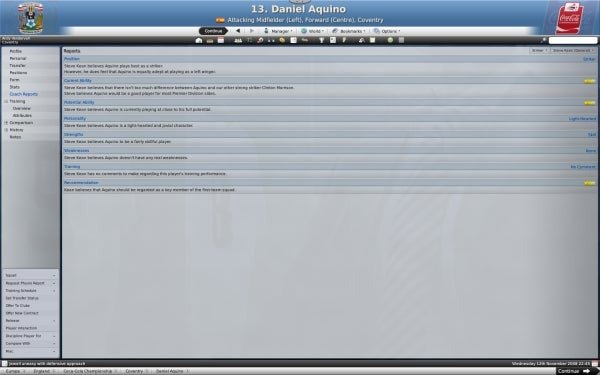 On occasion this can help you uncover some real gems and also underlines the importance of experience among your staff. At Coventry, for example, Steve Kean spent some time in Spain, so regularly gives you suggestions of players there due to his knowledge the region. This means there’s more value in thinking about who to employ based on what experience they have. You can also routinely request a report on players that are available for loan in specific positions, so if you find yourself in an injury crisis you can save trawling through lists of players and just go straight to your assistant. This, you’ll quickly realise, is an absolute godsend and every now again you can find a player to sign at bargain basement prices, too.


Another area of interaction that has been further developed is media relations. Now you’ll be subject to regular press conferences where you have to answer questions from the assembled press, enquiring about your tactics, your transfer targets and the threats posed by forthcoming opposition. Your responses, as ever, will have an effect on your team, either improving morale or angering players depending on what you say. This extra level of depth is a welcome one and makes perfect sense given the role the media plays in the modern game and if you tire of questions you always have the option to leave, storm out in anger or send your assistant instead. 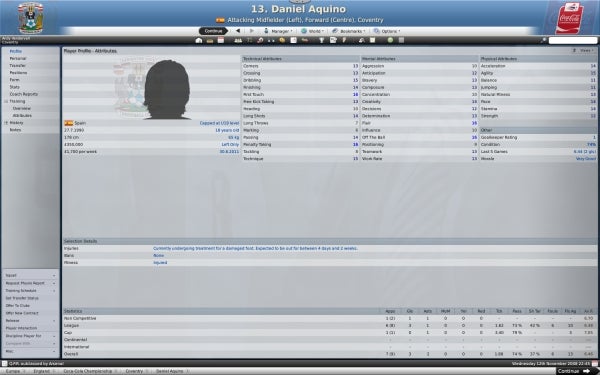 Another element of the media relations that’s been cranked up are transfer rumours. This also reflects real-life, in so much as you’re regularly linked with players you’ve never even heard of and have no intention of buying. Thankfully there’s a transfer rumour section, too, so your regular inbox isn’t constantly clogged with annoying reports – something that did become a problem in previous editions.


As it does every year, the transfer system has also seen some tweaking. Teams are more willing to negotiate several times before settling on a final figure and there’s a greater emphasis on season long loans, as has become the fashion in real life. Just like the other changes this further enhances the realism in the game and it’s rare that you ever feel that a transaction hasn’t panned out in a logical manner. In a more general sense, we also found it far easier to sell the players we didn’t want. Offering your players to others proved far more effective than in the past, so if you need to unload some deadweight to fund a transfer then you can do so pretty quickly. You can also adjust your budget, shifting money from the transfer budget to fund wages, or vice versa.

Elsewhere there are even more tweaks to be found. Board Confidence, something that’s existed in the game for quite a while now, has been expanded to give you more feedback about how the board and the fans feel you’re performing. This includes the confidence in the signings you have made, how you’ve managed the finances and, of course, how they feel your team are performing on the pitch.


And out on the pitch things have changed a bit more, too. In the tactics screen, for example, you can no longer set players to move sideways or more than one position forward or back. SI’s reasoning for this is that such appendages served no realistic tactical role and we’re given to agree. Indeed, it’s noticeable over recent iterations that the tactical element of FM has become far more realistic. Thus the game has become much less about concocting weird and wonderful “killer” tactics and more about organising your team effectively, matching the right players to the right roles and ensuring they’re capable of doing what you ask. It might upset some long-time users, but from a purist point of view it makes perfect sense. 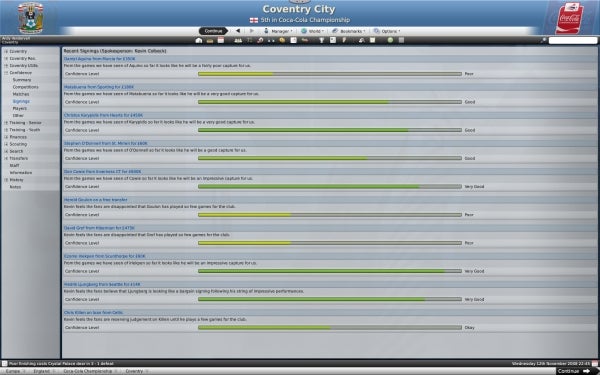 Likewise, that player ratings are no longer integer is an excellent move, too. Instead of getting a whole team scoring 7/10 for their performances, you get people on 6.8 or 7.1 and so forth. This provides a more accurate understanding of how each player compares while the distance covered stat is also a great tool to see who is putting in the hard yards and who is being lazy.


Another welcome extension comes in training. Though you’ve been able, for a long time in fact, to re-train players into new positions, it hasn’t been possible to train new ‘preferred moves’ – as they are called in the game. This has now been rectified, so you can encourage midfielders to get into the box, wingers to run with the ball, defenders to not dive in and plenty else besides. This is another invaluable tool in melding and shaping your squad to suit the kind of game you want to play, so you needn’t always dump a player who otherwise is perfectly capable or has potential.


Given the size of the game it’s amazing there aren’t more obvious problems, but that doesn’t mean there aren’t any. Even after the first patch injuries to players within games are far too frequent. Be they relatively minor knocks or more serious injuries players seem far too fragile, even by today’s standards. To illustrate this point, in one game we lost three strikers within 60 minutes and all to injuries that forced them to leave the pitch. This is an extreme example and it’s not like this every single game, but that doesn’t stop it becoming very annoying. Every now and again we also came across graphical glitches in the TV View, like the lines of the penalty box not being rendered. We also encountered the occasional freeze-up, particular when entering matches. Ultimately nothing we came across prevented us from enjoying the game, but these are issues that need fixing.


Making an already very good game better is difficult, but Sports Interactive has done just that for Football Manager 2009. Every new feature adds a new level of depth and realism, while also being well considered and well implemented. And though there are always little things that could be improved upon, as a whole it’s another great progression for the series.